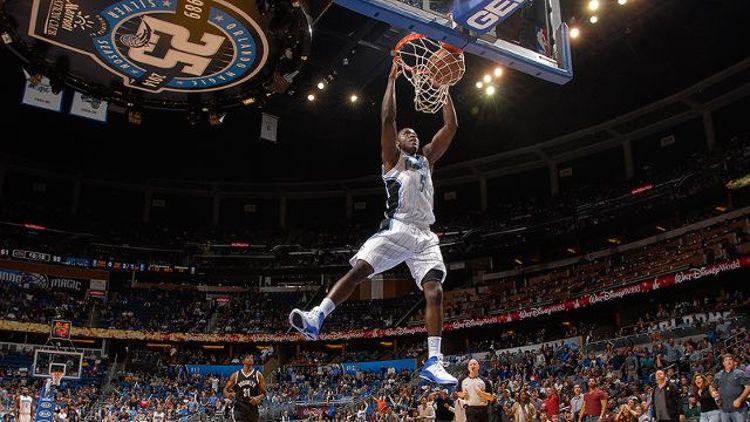 This is how he’s doing.

Victor Oladipo is not the most efficient rookie in his class. He is not the most efficient 2-guard in the NBA. He is not even the most efficient 2-guard on his own team. But that isn’t the point. The Orlando Magic have set a course to something worse than mediocrity, and that ship is cruising. The purpose of their season appears to be along the lines of this: lose 55 games; turn Arron Afflalo into a steamer trunk of draft picks; exhume Nik Vucevic from the ocean each night so he can lay waste to a new city; develop Moe Harkless and Andrew Nicholson into chirping, Spurs-esque shooters; shed dead weight like Christian Bale in The Machinist; and let Dipo do Dipo.

So far that has meant a few things, including having the Indiana product run the point when he has no business doing so. Oladipo is turning the ball over four times a game, recklessly dashing into the lane or missing defenders who jump his telegraphed passes. He sometimes plays like he’s wearing stunna shades. He recently gave it up nine times in a game against the Mavericks, sacrificed by head coach Jacque Vaughn to the attritious gods. He looked like he’d hoovered some Adderall before the game, his body routinely twisting away from itself. I’ve described Oladipo as a broken cursor, a failing helicopter, a fraying feather duster, and a blind hyena. He’s definitely not a point guard. Oladipo is also shooting a meager 40 percent from the field. He is not polished, and we shouldn’t expect him to be. He’s a rookie, and even in this dilapidated home for orphaned boys we’re calling this year’s NBA rookie class, he isn’t the best player. The Gumby-lite Michael Carter-Williams would likely win that honor if the season ended today. At the moment, Nate Wolters of the comically pitiful Milwaukee Bucks is a reasonable comparison for Dipo. That’s not OK. But Oladipo, as many suspected, is capable of an uncommon energy in games. Star quality is what slimeball movie studio executives called it. He also recalls a class of player that general managers hate at first and then grow to rely on. Andre Iguodala. Jimmy Butler. Gordon Hayward. Do-it-all types, lacking in alpha skill or personality, but capable of creating a crooked box score. The best of them play elite defense. Oladipo is going to do that. He absolutely hounds opposing players. About halfway through the below highlight reel, he thumps Deron Williams in the chest, reaching for the ball and racing to the other end of the floor. It ends with Oladipo turning himself into a human exclamation point.

This is the sight of a younger generation crushing its forebears. Williams’s LiveJournal has nothing on Oladipo’s Snapchats. Oladipo uses his body like a wobbly Big Wheel rumbling down a neighborhood hill, bodying up to opponents with pre-rumba seduction, and then taking them. This often leads to dunks. Which is the other thing Oladipo does. Barring Blake Griffin’s Kia Campaign Delivery System in 2011, it has been some time since a true-blue superstar participated in a dunk contest, depending on your view of “Dwight Howard, Dunker.” Oladipo throws down 360s, tomahawks, and facials in games. Last night, he simultaneously put Al Horford and Paul Millsap on that Summer Jam screen. He wants to dunk on defenders on every drive, and not just because it looks great. He seems to know that this is his best shot and the clearest path to hollowing out another player’s soul. His dunks have the snap-click sound that a young Vince Carter once had. They snikt, like Wolverine’s claws. The dunk contest is a part of an ancient civilization, thrust into the present once a year. It’s Bruce Springsteen, cranking out decreasingly valuable art and unable to shut itself down. Players like Dipo — mad-eyed, superior athletes with flair — are what made it matter. May he briefly revive this jungleland come February.