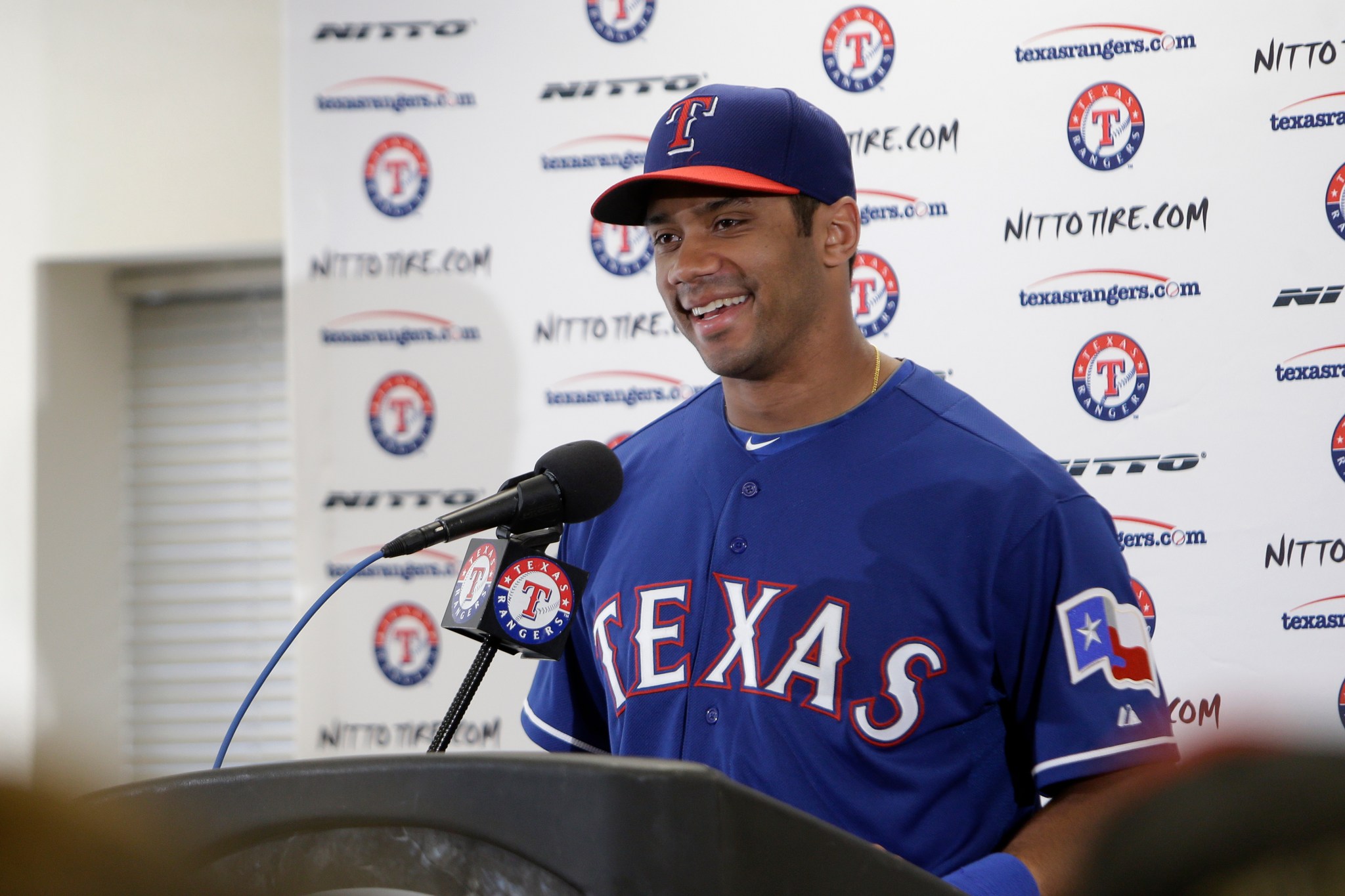 Every now and then, we will attempt to write the worst sports column on earth. Today: Let’s talk about two quarterbacks who share the same division, but might not be in the same class.

PHOENIX—After a day in the hot Arizona sun, I drove away dumbfounded. I went back to my hotel and poured a drink. I sat down at the desk, and ran two fingers down the page of a dictionary. The first definition:

But that’s not not quite what I was looking for. Not what I was feeling Monday night. So I looked down toward the second definition.

Such as to cause wonder, admiration, or astonishment.

There it is. That’s exactly how I felt watching Super Bowl champion Russell Wilson out there working with the Texas Rangers at spring training this week.

For me, Russell Wilson is the dictionary definition of marvelous. Every now and then, the guy makes you stop and catch your breath, and just marvel at it all.

He fielded ground balls at Rangers camp Monday, and sat in the dugout during a scrimmage with the Indians. It was all just a special scene. Hopefully, you saw the highlights of all this. I couldn’t get enough.

The Rangers play spring ball in Surprise, Arizona, and towns don’t get much more pleasant than what we saw Monday. Even the team was caught off guard.

“He surprised me for not being out on the baseball field for a while,” Rangers manager Ron Washington said after practice. “I might have burned his legs up a little bit, but he made it through all the drills and did a fantastic job.”

Russell Wilson working his butt off and doing a fantastic job?

“He’s got tremendous aptitude,” Washington added. “That’s why he is who he is. You give him something, and he knows how to apply it.”

That’s the kid we’ve all come to know over the past few years. A guy who doesn’t know how to fail. An impressive player, but an even more impressive person. A winner at life.

A fellow reporter asked Washington what his players could pick up from getting their hands dirty next to a Super Bowl champion. “They can take something from his attitude,” he said. “Take something from his preparation. That guy around you, he draws attention. He’s such a personable guy, great character guy. He’s a champion. Twenty-five years old — he’s special.”

I gotta say, Russell helped me, too. In this business you spend so much time dealing with clowns and con men, sometimes it wears on you. It comes with the territory, sure.

I get that. Part of the job. But sometimes it’s nice to see the other side of the story. The guys who make you remember why you started loving sports in the first place. Russell’s one of those guys.

But the most interesting lesson from Rangers spring training was about a guy who wasn’t even there. While Russell Wilson was out in Arizona getting his hands dirty, his biggest rival was up in San Francisco rubbing his hands together, waiting for a payday.

Colin Kaepernick is making somewhere in the neighborhood of $1 million right now, and let’s just say he’s looking to relocate.

Reports out of San Francisco say he wants a new deal, and he’s demanding $18 million annually from the 49ers. If he doesn’t get it? As NFL.com reports, “If the 49ers aren’t willing to meet Kaepernick’s asking price, he hasn’t ruled out playing the 2014 season on his salary of $973,766 and cashing in as a free agent next offseason.”

Forget kissing biceps. This guy wants the Niners to kiss his ring.

Or else they can kiss him good-bye. 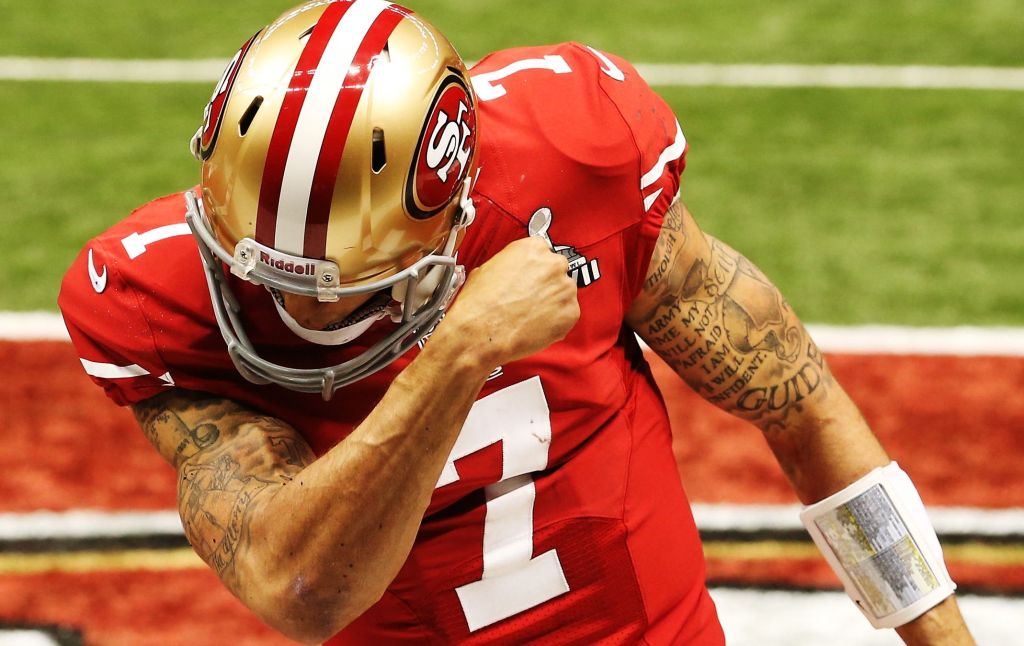 We see it a lot these days. Some guys make it to the big show and they’re just happy to be part of the cast. Other guys? Even when they make it to center stage, they’re not happy until their name’s in flashing lights and their checks come with eight figures.

All these guys think they’re king of the world.

Well, guess what: Leo DiCaprio’s character ends that movie alone, drowning in the freezing cold water of the Atlantic Ocean.

Pride comes before the fall.

I’m not saying Kaepernick falls into that category, but it was interesting to watch this week. At the same time his coach finds himself in a struggle for more money and more influence in the 49ers organization, the quarterback wants his due, too. Maybe there’s a culture of “ME” in San Francisco that explains all this, I don’t know.

The one thing we know for sure is, there’s a culture of “TEAM” in Seattle, and it starts with guys like Russell Wilson. You heard Ron Washington. Wilson’s preparation, his attitude … it’s all contagious. He sets the tone for everyone else.

And while one of the best young quarterbacks in football spent this week demanding more money, the quarterback who beat him in January was out in Arizona playing a game for free this week. Just a kid who’s loved baseball his entire life, going out there and living his dream for a day. You can’t put a price tag on that.

If guys like Harbaugh and Kaepernick want to hit it big, they should pay attention. When you win a Super Bowl, you get the Leo DiCaprio treatment everywhere you go.

To the victor go the spoils, you know?

As for the losers … I don’t know. Next to Russell Wilson this week, those guys just look spoiled.