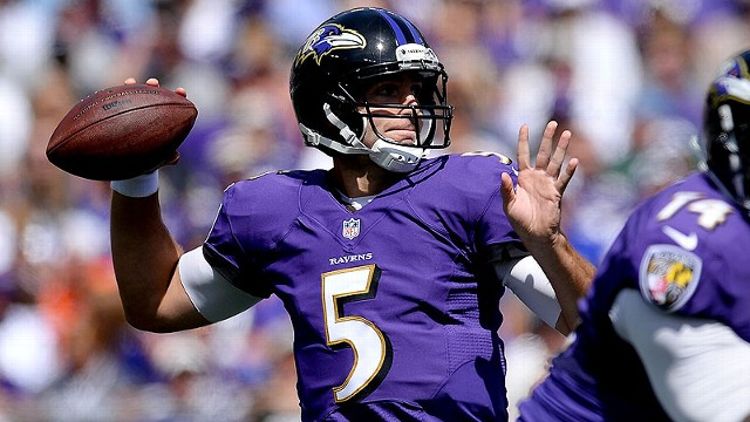 Every now and then, we will attempt to write the worst sports column on earth. Today: Let’s talk about Joe Flacco and life’s little miracles.

OWINGS MILLS, Md. — How bad do you want it? What are you willing to sacrifice?

The answers to those three questions are the difference between failure and success in the National Football League. We see it every weekend. This week? Joe Flacco and his wife welcomed a new baby into the world on Sunday, but Flacco wasn’t there.

Before he could cradle his newborn, he had to hit the gridiron to give the Cleveland Browns a little tough love. He went 22-of-34 for 211 yards and one touchdown.

From where I was sitting, this was as impressive as it gets.

Joe knew his son and wife could wait — first he had to lock arms with his brothers.

We’ve all had doubts about Flacco over the years, absolutely. When the Ravens gave him a $120 million contract this summer, you couldn’t help but wonder. There are $52 million in guarantees baked into that meal.

Could be tough to swallow, we said at the time.

But Ol’ Regular Joe was all meat and potatoes this weekend.

It was refreshing. A lot of guys these days are all sizzle and not much steak. They look for any excuse to skip a game, skip a practice, collect a paycheck without giving anything back. Not just in football, either. In a shrug-your-shoulders world, you won’t find many people who want to bend over and do the work. Flacco’s different, I guess.

Just for a second, he made me proud to be a football fan. Because this sport is different. For 16 Sundays a year, the whole world stops. You try explaining this to your wife every weekend, and it’s always the same conversation. Maybe she listens, maybe she doesn’t. Next time, maybe you should tell her the story of Joe Flacco and she’ll understand.

In this sport you can either work hard, or start looking for work.

There’s no time for distractions.

It reminds me of a great Nick Saban story I once heard. Last year, football’s five-star general was talking to a reporter when he finally opened up about his personal life a little bit. “My wife said ‘Happy birthday’ this morning,” he said. “And it was like, ‘Oh, I forgot.'”

Isn’t that what it’s all about? The guy’s got horse blinders on.

And you wonder why he wins the race every year.

“I appreciate people calling,” Saban added. “But it really is hard to almost acknowledge, personally, that something different is happening, because you’re in such a routine of what you feel you need to do to get the team ready to play the game. Football season is not a job. It’s more a way of life.”

For the winners it is.

For Flacco, for Saban.

Winners know only one way to live.

Then you think back to last year’s Super Bowl, when Colin Kaepernick was outclassed in the Big Easy, and some of this starts to make sense. You think about Saban teaching Johnny Clownshoes a lesson in College Station on Saturday, and you understand why winners like AJ McCarron didn’t treat the Manning Passing Academy like a frat party this summer.

You see Kaepernick throw three interceptions on national TV Sunday night, and you realize that maybe all those photo shoots were too much for a quarterback who still hasn’t done enough.

Look, it’s not a value judgment. Like everything else in life, it comes down to personal choice. It’s not my job to tell a football player he should skip the birth of his child to go out and earn his paycheck. I respect whatever decision anyone makes. But the arc of destiny bends toward the guys who sacrifice everything — and that’ll never change.

The powers that be can turn football into two-hand touch, players can act like movie stars, America can turn into a country of Ferris Buellers skipping out on hard work. Fine, whatever. But amid all that, I’m glad the winners still look like Joe Flacco.

In a world where everyone’s looking for shortcuts, it makes you appreciate the guys who go the extra mile.

So sure, maybe Flacco talked to his wife and they both made a personal decision that it was best for him to go play the game. But maybe not. Maybe he just told her that Sundays are for football, and before she could respond he was out the door. He had to go do some work with his brothers. The family business comes first.

The critics will be crying about misplaced priorities from a mile away, definitely. But have someone send ’em back to the nursery and let ’em howl. They don’t get their binkie this week. This is America’s game, and one day Joe is gonna sit his son down and tell him to ignore all the PC rhetoric out there. At the end of the day, the family business boils down to three words.