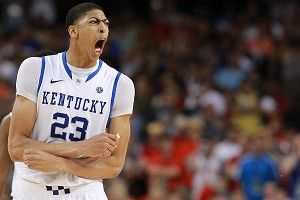 We asked Mark Titus for five predictions before NCAA tournament games during March Madness this year. Here’s what he had to say about tonight’s championship game …

Tyshawn Taylor will make the All-Tournament team while going 0-for-23 from 3-point range
I’m not sure if it would be a record or if such a record even exists, but I’m guessing Taylor, who is currently 0-for-20 from behind the arc in the tournament, will be the first person to not make a single 3 in 20 or more attempts and still be named to the All-Tournament team. Outside of his 22-point performance in the Elite Eight against North Carolina, Taylor hasn’t exactly had a great tournament, but I think he’s going to have a good enough game Monday (without making a 3, of course) that he’ll secure his spot on the All-Tournament team with Anthony Davis, Michael Kidd-Gilchrist, Terrence Jones, and Thomas Robinson.

Thomas Robinson will have a better game than Anthony Davis
Before I give my reason as to why I think Robinson will outplay Davis, let me first say that I fully expect Davis to play so well that at some point tonight, “Anthony Davis,” “That unibrow,” “OK Davis I see you,” and “#BeliebersLoveDavis” will all be trending on Twitter. But even though Davis will likely finish with something like 15 points, 12 rebounds, and four blocks, Robinson will be even better simply because of two words: “I agree.”

In case you don’t know what I mean, I should point out that before Ohio State played Kansas on Saturday night, Jared Sullinger said Robinson should’ve been named the national player of the year instead of Davis, which was a comment Robinson didn’t shy away from publicly agreeing with. Now, there’s a chance that Davis will use this as motivation and try to prove he really did deserve the award, but Davis just doesn’t strike me as the kind of guy who would get wrapped up in something like this. I mean, he’s the best player in the country on the best team in the country, and he’s a lock to be the no. 1 pick in the NBA draft in June, so he really has nothing at all to prove. Robinson, on the other hand, has always been a passionate guy who wears his emotions on his sleeve, which tells me that he’s going to play with a huge chip on his shoulder tonight in an effort to prove to the world that he’s the best college basketball has to offer.

Lexington will satisfy all of the riot expectations I had for Louisville on Saturday night
In retrospect, I expected way too much out of Louisville when I predicted that the city would burn to the ground Saturday night, because I forgot to consider just how big of an underdog the Cardinals were. If they had beaten Kentucky, I’m sure the fine people of Louisville would’ve reacted appropriately by flipping over cars and spray-painting penises on government buildings. But instead, the Cardinals lost a game that they played about as well as anyone could’ve expected. Riots typically only take place following devastating losses and monumental wins, which explains why the people of Louisville didn’t take to the streets quite like I expected. It also explains why Lexington is doomed.

Following Saturday night’s win over Louisville, in which the Wildcats failed to cover the spread, Kentucky fans threw back a little too much moonshine and caused quite the ruckus in Lexington by burning couches and even occasionally yelling various swear words. This was particularly puzzling for people who aren’t Kentucky fans, because rioting a non-championship win in which you were heavily favored seems a little unnecessary.

Regardless, based on how out of control the UK campus area got after Saturday’s win, I don’t see how there’s any way tonight’s riot won’t put Vancouver’s 2011 Stanley Cup riot to shame. That’s because the only possible scenarios tonight are for the Wildcats to win their first national championship since 1998 and secure their claim as college basketball’s best all-time team, or for them to let a sure thing slip away and have the most entertaining season in Kentucky basketball history come to an end with nothing to show for it.

So yeah, in the words of John Wooden, “Shit’s about to go down.”

No matter what happens, college basketball fans will crucify John Calipari and praise Bill Self
This is the biggest no-brainer prediction I’ve made in the entire tournament. Self could show up to the game drunk wearing sunglasses, 30 bead necklaces, no pants, and a shirt that reads “Wine ‘em, Dine ‘em, 69 ‘em,” and even if he was passed out on the bench for the entirety of a blowout loss, college basketball fans would still marvel at the great coaching job it took to get the Jayhawks to the title game. And if he won, of course, it would only be a matter of days before Kansas took a wrecking ball to the Phog Allen statue outside of Allen Fieldhouse to make room for a statue of Self’s toupee.

Meanwhile, if Calipari wins, social media sites, message boards, and comment sections will be flooded with people making jokes about how the title will be vacated within three years or how a team full of one-and-done guys is destroying college basketball. And if Kentucky loses, all the talk will be about how Calipari choked and again came up short in his pursuit of a national championship. For the most part, both of these guys deserve the reputations they have, but it is still interesting that there isn’t a single scenario that would prevent Self from being put on a pedestal or Calipari from being vilified tonight.

Jim Nantz’s line as the clock runs out will surprisingly be somewhat clever
After I used the last prediction on something that will almost certainly happen, it’s only fair that I go out on a limb here and make a prediction that even Harold Camping thinks is ridiculous. For those who don’t know, Nantz has a history of making terrible puns as the clock runs out on NCAA title games, like when Arizona won it all in 1997, UConn won in 1999, Michigan State won in 2000, and North Carolina won in 2005. But even though all signs point to him saying, “Kentucky — it’s time to Cali-party!” if the Wildcats win and, “Here’s to you, Mr. Robinson!” if the Jayhawks win, I’m going to put an unfathomable amount of trust in Nantz and predict that this year his line won’t cause a majority of viewers to facepalm. I would never intentionally step on the toes of a pun legend like Nantz, but on the off chance that he’s reading this, I’d like to humbly offer these two suggestions, which will hopefully be good enough that after he reads them, he’ll hire me as his pun intern in turn:

If Kentucky wins, the best you can do is recognize their eighth national title by saying: “Don’t eight the player, eight the game!”

And if Kansas wins, the obvious choice is to pay homage to The Rock for beating John Cena at WrestleMania Sunday night by saying: “KU smell what the Rock Chalk is cookin’?”