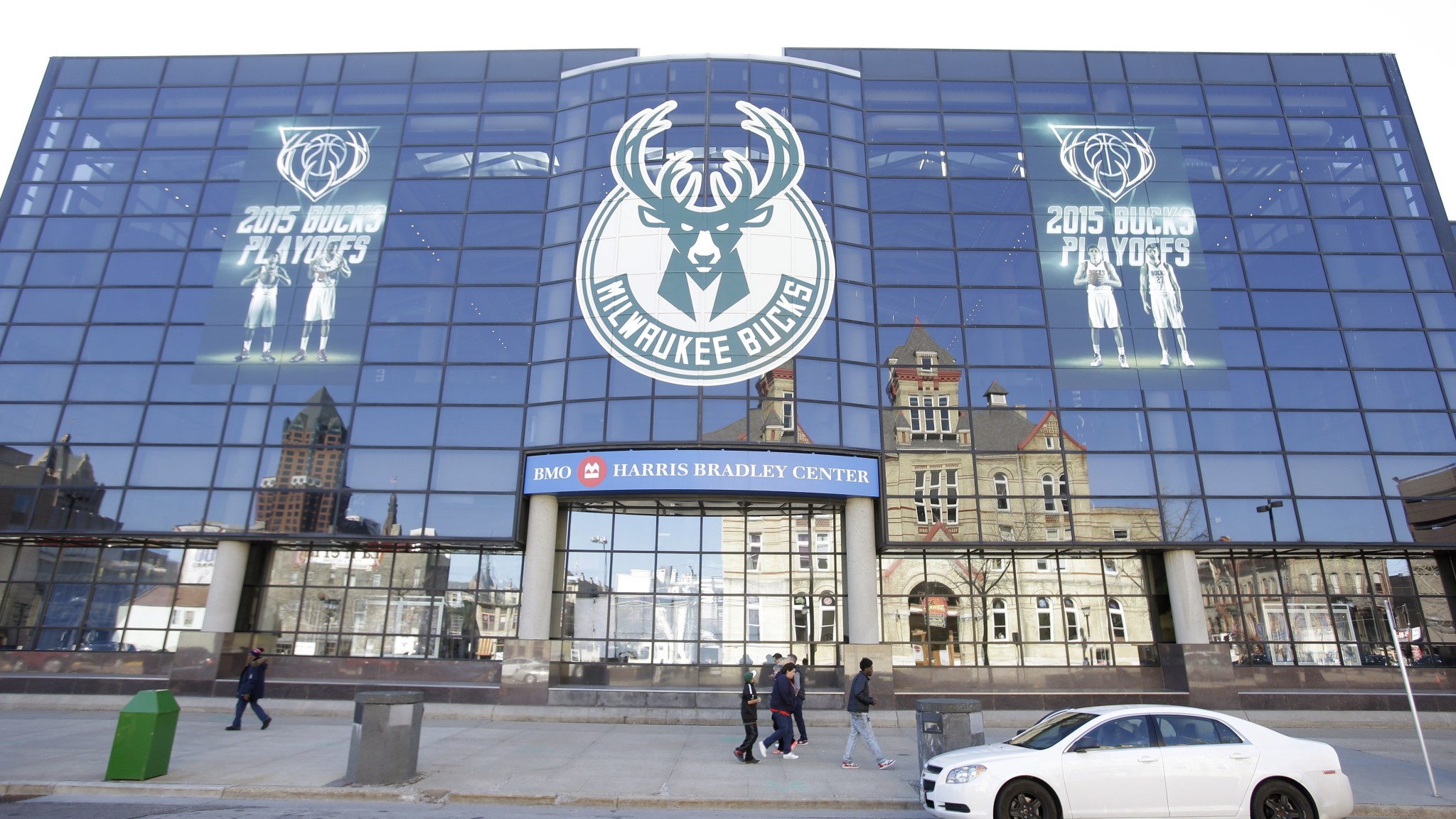 Two years ago, the Bucks gave NBA court design a jolt by shading giant “M’s” into each half of the floor — a throwback to the pop-art MECCA floor on which the Bucks played during the late 1970s and 1980s. 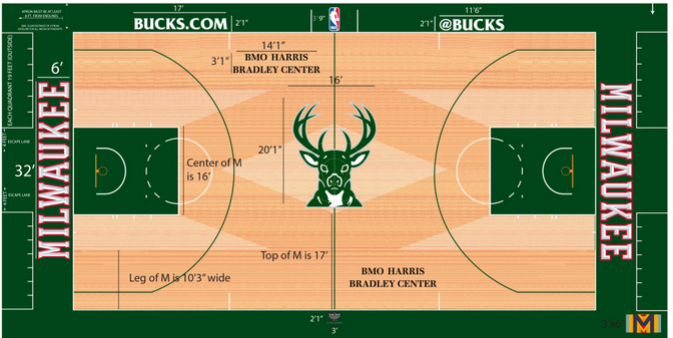 Less than a year later, a group of finance heavies bought the Bucks and pushed a total image re-brand — new logos, new uniforms, a revamped color scheme, and more. The team would have to redesign the floor again, and today it unveiled the final product: 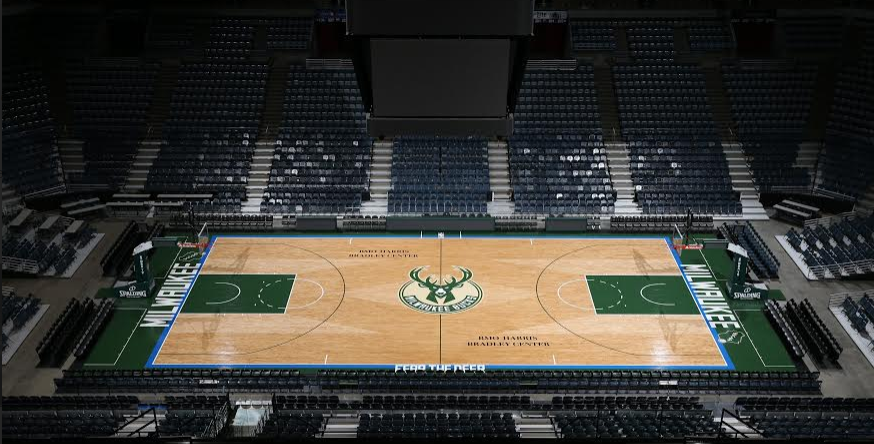 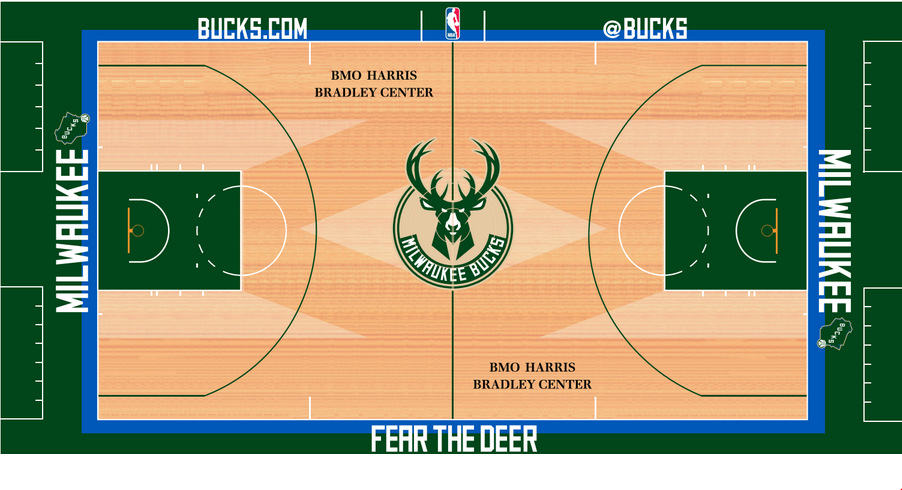 The changes are subtle, but the journey was a painstaking bit of trial and error that took the better part of a year. Only a half-dozen officials had access to the redesigns, since the Bucks wanted to prevent any leaks. “We were operating a little covertly, even in our own offices,” says Dustin Godsey, the team’s vice-president of marketing.

Team officials offered Grantland a peek behind the scenes of the redesign, and given my dorky affinity for court designs, I obviously couldn’t resist. It has been a huge month for NBA design renovations, with the Clippers (boo, though I like the red more than most), Hawks (meh), and Sixers (thumbs up!) all unveiling new uniforms ahead of Milwaukee’s court rejiggering. Let’s dig into the process behind the latest bit of NBA art:

The NBA must approve even the teensiest design changes, so teams work hand in hand with league officials from the start. They brainstorm together, exchange mock-ups, and push the boundaries of what the league deems acceptable.

After two years, both the Bucks and the league office concluded the light-dark contrast that forms the giant “M’s” was too stark, Godsey says. Milwaukee’s innovation spurred the Pelicans and Cavaliers to shade designs into their own courts — a giant bird silhouette for New Orleans, a city skyline for Cleveland — but the contrast in both cases was softer than Milwaukee’s design. “For TV purposes,” Godsey says, “ours was a bit distracting.”

The softer look plays better on television, and the league prefers tonal consistency among teams with shaded design elements, Godsey says. The Bucks cycled through dozens of variations before finding the right look: The new “M’s” are 25 percent lighter than the old ones in color grade, and the surrounding wood is 25 percent darker.

When the Bucks teased their new logo in early April, they leaked a stylized new “M” mark  — a more jagged, modern “M” that looks like it could be at the bottom of Poseidon’s trident. The design team toyed with using that “M” in place of the traditional “M,” pitching both a big and small version: 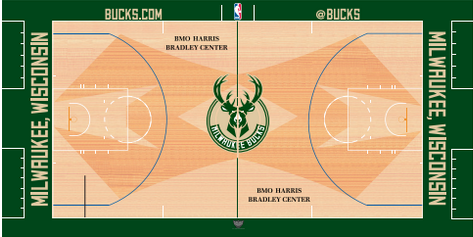 “We very nearly went that direction,” Godsey says. “But we decided it took away from what we were trying to do in the first place, which was pay respects to the old MECCA.”

The new “M” is a minor sidepiece in the Bucks’ collection of new logos and marks; the team regrets playing it up in the teaser, and it decided it didn’t belong in such a prominent place on the floor. “That’s the one thing I might go back and change,” Godsey says of the teaser. “Having it out there early made people think it was the main logo.”

The new “M” also reminds Godsey of a spaceship. “I could see people making Star Wars jokes,” he says.

As the great Paul Lukas detailed, the Bucks scrapped red as a secondary color and replaced it with a subtler blue. The team didn’t like the Christmas-y red-green mix and felt the blaring red overwhelmed the green — the team’s main color. “Red was an accent color, but it started to overtake the green,” Godsey says. “That’s something we’re going to be careful with now that we’re using blue. It has to be just an accent color. Green is our color. When people think of the Bucks, they think of green.”

The blue is meant to evoke Lake Michigan and the rivers that cut through Wisconsin, and the team wanted it somewhere on the floor — even if blue and green don’t traditionally mix, as Doubleday & Cartwright, the design consultants who partnered with the Bucks on the new logos, pointed out.

The team explored making the entire painted lane blue but concluded that would be too much: 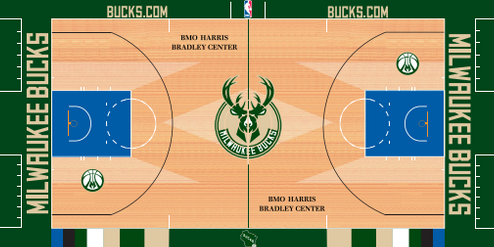 Some teams have two-toned painted areas, with stripes along either side of the lane, but the league no longer allows that for new designs, Godsey says. (Courts that already have it, like Minnesota’s mess of a floor, are grandfathered in.)

The Bucks thought about coloring the 3-point arc blue or placing a rainbow pattern featuring the blue along the sidelines — a checkered striping that would mimic the side of the team’s new jerseys: 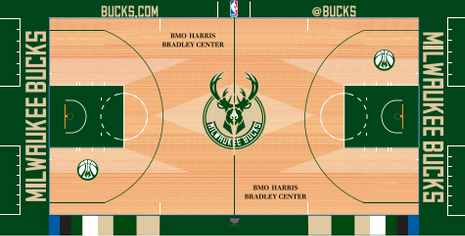 That seemed busy, too, Godsey says. Then they had an inspired thought: If the court was supposed to be a throwback to the MECCA, why not just ring the court in blue — as Robert Indiana did with the original MECCA court?

The Bucks came very close to shifting the deer-head logo out of prime center-court real estate and replacing it with the team’s new alternate logo — a solid green map of Wisconsin:

The team ultimately decided it was too soon to demote the deer head — the team’s primary logo. “Down the road, I wouldn’t be shocked if the state logo ended up at center court,” Godsey says.

By the way: The Bucks are well aware a Wisconsin high school team borrowed” aspects of the Bucks’ new deer logo for its own center-court design. The team hasn’t taken any legal action, and it may leave the issue to the NBA, which owns the intellectual property. The Bucks are drumming up taxpayer support for a new arena, and they understand how it might look for the big, bad NBA to crush a local school in court. “There’s something positive about it being a school all the way on the opposite end of the state,” Godsey says.

About half the league’s teams splash alternate logos in the corners of the court, and the Bucks experimented with both the state logo and their new “M-inside-a-basketball” mark there.

In the end, they kept the floor clear. “We just want a clean look,” Godsey says. They had another place in mind for the state logo, anyway.

The team veered in every direction here. They thought about shading the baseline black: 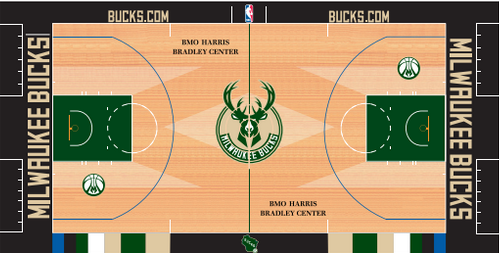 “It felt a little bit like we were saying, ‘Oh, black is cool. Let’s make it black,’” Godsey says. “We didn’t want to do black just for the sake of black.”

They wanted the state of Wisconsin represented somewhere and flirted with shoehorning the full text of “Milwaukee, Wisconsin” along both baselines:

“It looked scrunched,” Godsey says. “It was busy.”

They mulled aping Houston’s look, with colored letters popping in front of a barren wooden background: 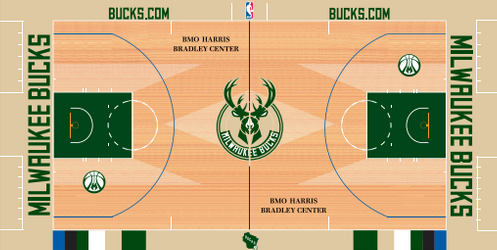 “I’m not a fan,” Godsey says. “That one went out almost immediately.” (For what it’s worth, I agree. I hate that unpainted look.)

They ended up in the right place, with the alternate state logo plopped alongside the word “Milwaukee,” a creative way to feature that mark and write out “Milwaukee, Wisconsin” without actually writing it out — and over-cluttering the floor. “It was important for us to get Wisconsin on the court somehow,” Godsey says. “People see us as Milwaukee’s team, but we also want them to see us as the state’s team.”

This is a toughie. The slogan is kitschy, and it’s tied specifically to the 2009-10 team that blitzed the league after the trade deadline (and before Andrew Bogut’s sad, career-altering arm injury). But the new owners, led by Marc Lasry and Wes Edens, love the slogan; they named the corporation that purchased the team “Fear the Deer, LLC.”

The cool outweighs the cheese, and the Bucks painted the logo in a powerful spot without extending the lettering too far in either direction. It’s central but not overwhelming, and the slogan has come to represent more than just that single season.

Overall, this is a nice upgrade. If we did the court rankings again, the Bucks would shoot up several spots.