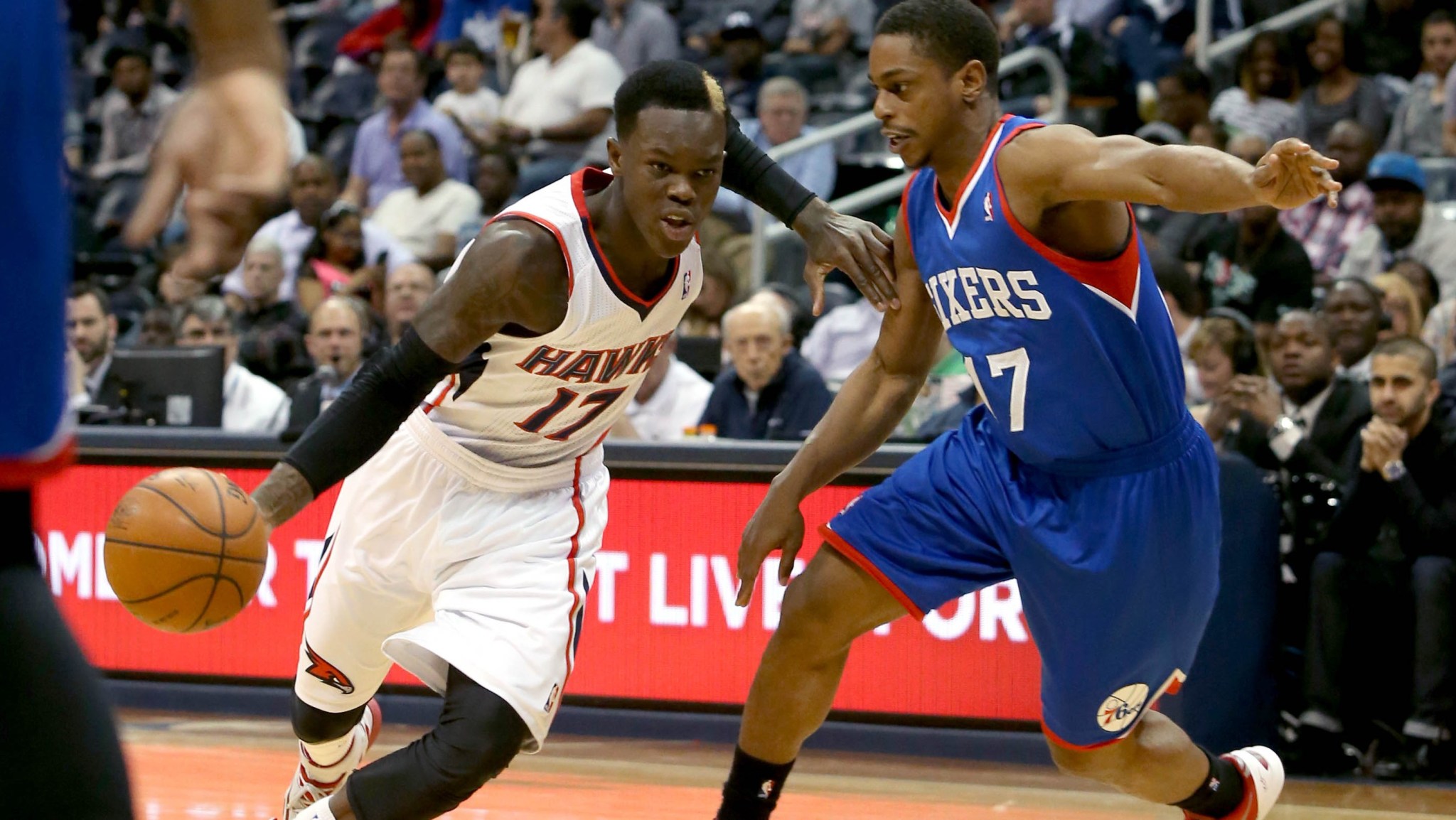 The Hawks, even at full strength, always seem to be at least one player away from being truly dangerous. They’re glorious to watch, a whir of precise ball movement and killer shooting, but ultimately nonthreatening against the league’s very best teams.

They’ve been especially thin at the wing since Mike Budenholzer took over as coach two years ago. It hasn’t been a fatal weakness. Kyle Korver is fire incarnate, shooting an absurd 57 percent from deep so far this season, and DeMarre Carroll has scrapped along on both ends in a role that is probably too big for him. Kent Bazemore and Thabo Sefolosha haven’t moved the needle yet, and Lou Williams, cast away for nothing1 because he didn’t really fit Budenholzer’s style, is now a Sixth Man of the Year candidate for the Drakes.

But something interesting has happened over the last two weeks for the Hawks, who are quietly 11-6 against the easiest schedule in the league: Dennis Schröder looks like a real, live NBA player, and he’s logging major crunch-time minutes. Schröder isn’t a wing; he’s Jeff Teague’s backup at point guard. But he’s a physical dude with a long wingspan, and he has played about two-thirds of his minutes in double-point-guard lineups alongside either Teague or Shelvin Mack. That makes him almost an honorary wing, and thus a potentially crucial hole-filler off Atlanta’s bench.

There was almost nothing to suggest Schröder might be on the verge of a mini breakout. He struggled horribly with turnovers last season, and he can’t shoot — kind of a big deal, considering Budenholzer is a 3-point-shooting zealot. “I do really value shooting, and if everybody can do it, it’s better,” Budenholzer tells Grantland. “But I think the way we play, having a point guard who can collapse the defense with spot-up shooting around him — that’s something that can really work for us.”

Schröder is a headstrong type who got to dominate the ball for a mediocre team in Germany before bolting to the NBA, and he had trouble adapting to Budenholzer’s system of constant passing and motion. Just a few weeks ago, he was riding the bench — and pouting about it. “All players tend to pout a bit and get frustrated when they’re not playing,” Budenholzer says. “Young players maybe aren’t as good at hiding it. But this season, if someone told Dennis he was pouting, he was at least more open to hearing it and saying, ‘Hey, maybe I’ve got to change this.’”

Something clicked. Schröder is shooting 54 percent, including 63 near the basket, and sharing the ball more willingly. He is jarringly fast with the ball. He turns the corner on the pick-and-roll, crouches low to the ground, and springs toward the rim with a turbo boost. When he gets there, he has a silky touch on layups and floaters with either hand.

Last season, Schröder was like a superhero who couldn’t control his powers. He would jet into the lane without a plan, find himself among a thicket of defenders, and cough up the ball. “Speed is nice,” Budenholzer says. “But you’ve got to learn how to use it.”

This season, Schröder is showing a better understanding of when to hit the gas, and how he can use his speed to get shots for teammates. On the pick-and-roll, Schröder senses right away when he has the help defender leaning the wrong way — and then, boom, he’s gone.

Notice that Omer Asik (guarding Paul Millsap here) scrambles all the way up to the level of the pick and appears ready to leap out way beyond the 3-point line to contain Schröder. Asik doesn’t want to do that; he’s a huge dude, and the Pelicans mostly ask him to drop back against the pick-and-roll. The threat of Millsap’s pick-and-pop 3-pointer forces Asik to ditch that strategy, since he needs to stick close to Millsap. Schröder leverages that adjustment to his advantage.

Schröder’s partnership with Al Horford helps; Horford has been leaving games early in the first and third quarters and reentering as the fulcrum of bench-heavy units, and he’s among the league’s canniest screeners. Horford is an expert at disguising the direction of his pick and flipping the angle at the very last second. If he looks to be setting up to Schröder’s right, the big man defending Horford might lurch that way early, since Schröder would naturally turn the corner in that direction.

If that defender telegraphs his gambit, Horford is brilliant about changing the plan. “That’s just him knowing the game,” Millsap says of Horford. “That’s the kind of player Al is.” Schröder is in on the act, and he knows when Horford has suckered the key help defender:

Schröder also understands the anxiety his speed can plant in enemy minds. Defenders worry they have to move almost in concert with Schröder just to stay in front of him, and he plays on that fear with mean-spirited fakes designed to coax them off-balance. He’s especially good at faking toward a pick, getting his defender to lean that way, and then zooming away from the screen and into a wide-open driving lane:

Schröder’s shaky shooting forces him to lean on this kind of trickery. Defenders go way under screens against him, daring him to pull for midrange jumpers. Point guards with good jumpers have only one defender — the big man guarding the screener — walling off the paint against them on the pick-and-roll. Schröder faces a two-man wall.

Defenses who play him well can squeeze off Schröder’s easiest passing windows. It’s hard to thread a pass to your rolling big man when your own defender can hang back in the paint and play the passing lane — like John Wall does here on this awkward attempted pass to Mike Scott in the lane: 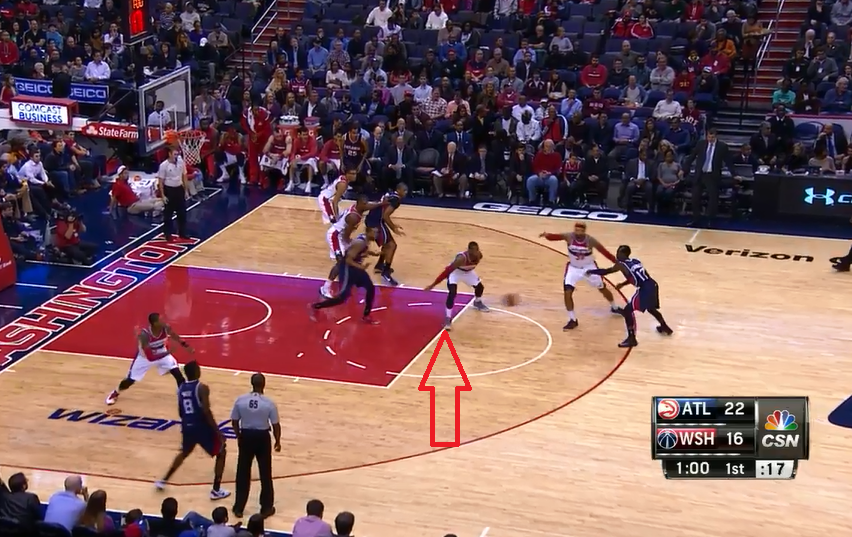 But the Hawks can at least maximize the space around Schröder, especially when he gets to play with Atlanta’s “A” lineups in crunch time. Everyone but Horford is a legitimate 3-point threat, and Horford is lethal from 20 feet and in. Teague isn’t a great high-volume bomber, but he’s shooting 41.5 percent so far this season, and he can make just enough catch-and-shoot triples to keep defenses honest off the ball as Schröder drives.

Schröder is advanced in his ability to read a moving chessboard on the fly. This is where you can see the Baby Rondo comparisons — the lanky point guard with a broken jumper, exquisite passing vision, and the ability to throw crazy wraparound dishes that traverse impossible angles. He just gets it. He knows how a defense is supposed to rotate in a given situation, and knowing what should happen means you can also know two other crucial things: what is going to happen next, and when the defense has screwed up a step in some fatal way. He knows when that shooter in the weakside corner should come open, and when the defense, perhaps too geared up to snuff that long-range threat, has left him a tiny window for a slick drop-off pass to a big man lurking at the rim.

He also has a sort of funky off-kilter timing to his game that you can’t teach. He’ll throw passes a beat earlier or later than a typical NBA playmaker, and that kind of small blip in cadence can fool defenses accustomed to things unfolding in a particular rhythm.2

Schröder can sometimes get too cute with his passes, forcing thread-the-needle interior looks when easier passes to shooters are available in his line of sight.

His accuracy comes and goes; Schröder has sabotaged several Atlanta possessions simply by throwing bounce passes that hit his teammates’ feet and shins. But Budenholzer will take those pass-first turnovers over the score-first variety that come on wild drives into the lane. “It sounds counterintuitive, but the way he’s turning over the ball now — it’s a good thing,” Budenholzer says. “He’s really trying to get his teammates the ball in the right places.”

Let’s not get crazy. This is a recent development. Schröder needs to improve his shot to really advance in the NBA, and he will experience setbacks this season. Hell, he’ll probably fall back out of Budenholzer’s rotation at some point. That is how it goes for 21-year-old dudes with limited high-level experience.

Schröder can also slip back into his old ball-stopping habits when he gets rolling, and the Hawks won’t tolerate that — even if he can do damage one-on-one. “He can hold it a little bit when he’s having success,” Budenholzer says. “He has to trust the pass, trust the system.”

Atlanta has been worse on both ends with Schröder on the floor, per NBA.com, though playing a ton with limited bench units doesn’t help those numbers. The team has exploded offensively when Schröder and Teague share the floor, but struggled badly on defense in that very limited sample size.

Schröder projects as a long-armed menace on defense, but he’s still learning the NBA game on that end, too. The Hawks are killing teams on offense — they’re fourth in points per possession, trailing only the Mavs, Raps, and Clippers — but they’ve regressed on defense. They’re 20th in points allowed per possession after checking in around the league average last season, and teams are slaughtering them around the basket.

Opponents have hit 57 percent of shots at the rim against the Hawks, the second-worst defensive mark in the league. Horford is the only Atlanta big that offers even the whiff of rim protection, and he just hasn’t been able to bring it this season; opponents have nailed 58 percent of shots near the basket when Horford is around both the shooter and the rim, per SportVU data — one of the worst marks in the league for any big man.

That’s not all on Horford, of course. The Hawks just don’t have great defensive personnel. Even their on-ball hounds, Teague and Carroll, can get a little spacey off the ball and fall victim to smart cuts. Millsap and Horford are both undersize for their positions, and the Hawks are a little bit worried Horford hasn’t rediscovered his peak game after missing most of last season with his second pectoral tear.

Atlanta is conserving Horford’s minutes, and he just hasn’t shown his usual explosion. He’s attempted only 15 free throws in 17 games, and he’s taking more long 2-point jumpers than ever. Horford has never been a huge free throw guy, but that number is alarming. His rebounding numbers are down, and Atlanta is an ugly 26th in defensive rebounding rate — a cardinal sin for any coach from the Spurs tree.

But it’s early, they’re 11-6, and they’ve found something in Schröder. His ceiling and future are uncertain, but it’s already clear he’s a legit NBA rotation player, and that matters for a Hawks team searching for perimeter depth.

On Wisconsin: Melvin Gordon and His Madison Proving Ground