CM Punk and the Malice at the Power Balance 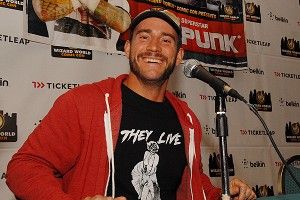 On Monday night in Sacramento, at the end of Raw, CM Punk stood in the audience while Vince McMahon berated him. Punk was standing at the top of a lower bowl staircase, and fans started messing with him. They talked trash, knocked clumsily into him, and, in the case of one benighted soul, smacked him in the back of the head. Punk wheeled around and hit the guy who did it, only it wasn’t the right guy. If Punk had attacked the right guy, nobody would have much cared. But Punk misfired, and message boards and sports-blog demagogues went apoplectic. How could Punk assault a fan? How could he violate the fourth wall like that? You’d think Punk was wrestling’s Metta World Peace. It was Malice at the Power Balance!

Set aside for a second that Punk has made a career out of assaulting the fourth wall. This wasn’t the first time a wrestler has tangled with a fan, not by a long shot.

Bad-guy wrestlers from the olden days talk about it all the time: On the way to and (especially) from the ring they got shoved, pelted with drinks, burnt with cigarettes, and, in some cases, stabbed by fans who took the performers’ villainous characters too seriously. Old ladies would torment them with pokes from hatpins. Fans in Puerto Rico would hurl batteries. On the streets the heels wore disguises to avoid trouble. It didn’t always work.

Even into the 1970s and ’80s, the Territorial Era was rife with unplanned audience involvement. Dallas’s WCCW was perhaps the most volatile: Fabulous Freebird Terry Gordy once tossed an interfering fan 20 feet over rows of seats. During a bout at the Cotton Bowl in 1985 that saw Gino Hernandez and Chris Adams get their heads shaved, fans crowded the ring and a bodyguard for the Von Erich family came to blows with one of them. And this says nothing of perhaps the most intransigent interlocutors — lovestruck female fans of the Von Erich brothers. Kevin Von Erich said he used to walk to the ring with one hand over his lips and the other covering his crotch.

Over the years, crowds became less bloodthirsty as fans accepted that pro wrestling was something less than factual. But then a new problem emerged: Wannabe tough guys, usually emboldened by booze, became interested in testing the wrestlers outside the ring. Cowboy Bill Watts, a promoter in the Mid South territory (and later a booker for WCW and WWF), famously encouraged his wrestlers to fight when they were confronted in public. And by “encouraged,” I mean he told them, “You’re fired if you don’t fight, and you’re fired if you lose the fight.” Stan Hansen — one of the sport’s true tough guys — once advised a young Mick Foley: “Kid, nothing good can happen to you in a bar.” As late as 1995, Shawn Michaels, Davey Boy Smith, and Shawn Waltman brawled with a group of U.S. Marines at a bar in Syracuse and Michaels got the piss beat out of him.

That same year, an ECW event was halted when dozens of fans heaved folding chairs into the ring, literally burying the tag team Public Enemy. One of ECW’s innovations was its spin on crowd interactivity. Fans made signs, directed the flow of matches with coordinated chanting, and brought household items to events for the wrestlers to use as weapons. When that self-awareness spread to WWF and WCW, the big leagues seemed ill-suited for such throes of fan passion. There was the time a fan entered the ring during an Eddie Guerrero–Rob Van Dam match and knocked Eddie off a ladder. (Eddie got some licks in after.)

In WCW, fan run-ins were disturbingly common. At the moment Hulk Hogan turned heel, as if in answer to announcer Tony Schiavone’s plea that “We need to get someone out there,” a fan bumbled into the ring, where he was mauled by Scott Hall and Kevin Nash. That set the precedent. There were other times — when an overzealous fan yanked Raven’s hair in the middle of a promo, when showrunner Eric Bischoff was attacked, and when Hogan was nearly assaulted by a old lady. The list goes on …

Fan interference has carried over into today’s WWE. Perhaps, in the era of reality television, it’s inevitable that fans’ impulses merge with wrongheaded fame-seeking. Like the American baseball streaker, the European soccer streaker, the commonplace attention-seeking drunkard, or the stray front-row lunatic, the sports world is more rife than ever with outbursts of everyman glory-hogging.

Wrestling is no different. A feud between John Cena and Jeff Hardy several years back saw a couple of fan incidents. In TNA wrestling, a guy in a luchador mask whose friend encouraged him to get in the ring with Jeff Jarrett got unceremoniously mangled. In 2009, Chris Jericho fought through a throng of fans as he was trying to leave an arena and things got shockingly out of hand.