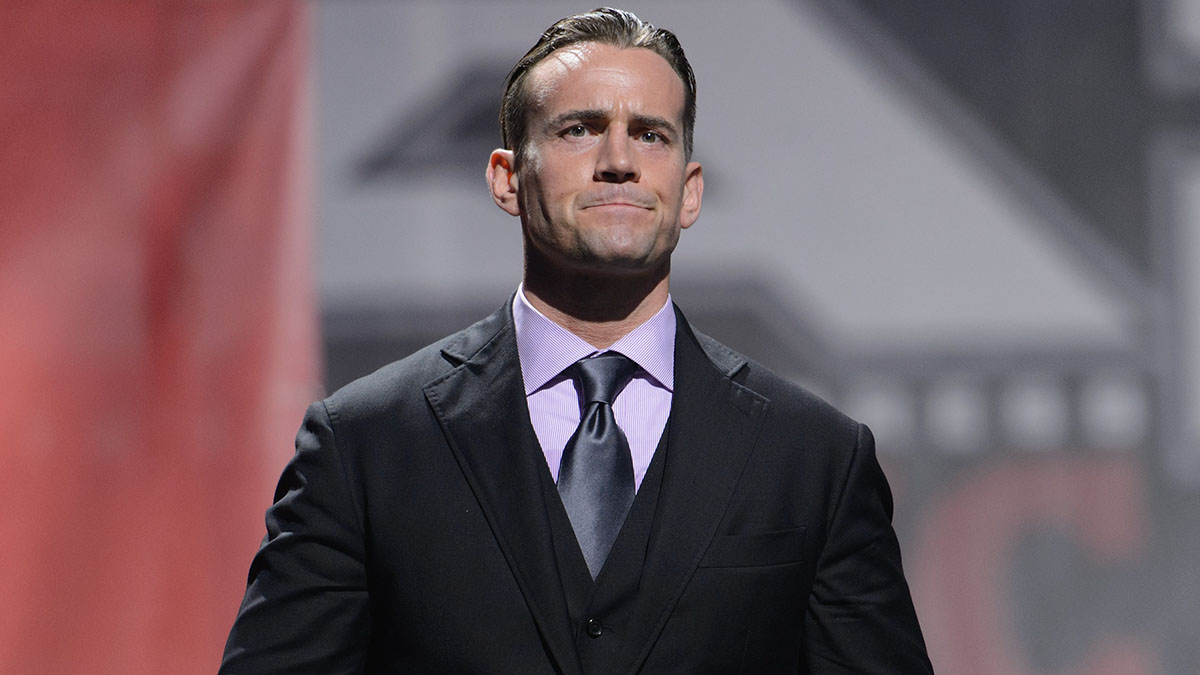 Ten months ago, CM Punk left WWE. It was the biggest pro wrestling story line of the year, and it wasn’t even mentioned onscreen until two months after his departure, when WWE was in Punk’s hometown of Chicago. Even then, it was only brought up to defuse the inevitable pro-Punk chants. Since then, rumors have swirled about the reasons for his walkout. Last week, on Thanksgiving, Punk appeared on his friend Colt Cabana’s Art of Wrestling podcast to finally tell his side of the story. The YouTube video of the podcast already has more than 950,000 views. That’s more than the number of people who subscribe to WWE Network. It’s kind of a big deal. Little wonder Punk thinks he’s making more of a difference at home on his couch than he ever could have made inside WWE.

Over the course of the podcast, Punk lists a series of issues — medical negligence, pay disputes, creative differences — that led to him leaving the company. Punk tells a lively story of distrust and exploitation that should call into question any fan’s devotion to WWE in the same way that the Dave Duerson or Jonathan Martin or Ray Rice stories rocked fans’ fidelity to the NFL. “There’s a lot of assumption out there from people: I was disgruntled with my story lines, I was banged up, I was mad that I wasn’t the main event of WrestleMania, I was mad that I was wrestling Triple H. There’s an element of truth in all of those things, but I can’t say there was one big thing that led to my decision.”1

“Actually,” he immediately corrects himself, “the big thing that led to my decision was my health.”

Whether or not that was the case, Punk’s health was this interview’s real pipebomb — if you’ll forgive me for using a term Punk now claims to despise. Set aside his gripes about missed promotional opportunities: He couldn’t put sponsors on his tights; he couldn’t escort his buddy Chael Sonnen to the octagon at a UFC show; he lost the lead in 12 Rounds 2. Set aside putting up with Internet fans who call him a “quieter” (sic) and feel entitled to answers about why he left. Set aside his distaste with WWE’s regular demands for him to lose to part-time talent (“I’ve gotta put over the Rock and he goes away; I’ve gotta put over Taker and he goes away; and now I’m putting over Brock and he goes away. My stock is dropping rapidly in the eyes of the casual viewer, who is who they care about.”) Hell, even set aside his lousy relationship with Triple H, with whom he claims there were “never any good vibes.”

The real issue was his health, and by inference the health of every WWE “superstar.” Punk’s litany of charges are ghastly and borderline unconscionable, even if, as WWE chairman Vince McMahon noted Monday night on Steve Austin’s podcast, “there are two sides to every story.” Punk’s account boils down to the following eyebrow-raising claims:

There are counterarguments for nearly all of Punk’s accusations: Why didn’t he refuse to work when he was injured or felt unsafe? Why didn’t he have a personal doctor? But the overall effect of listening to him recount his experience is devastating. It should be arresting to WWE fans and to WWE shareholders. It’s time to question how WWE conducts business when one of its biggest stars says that post-concussion syndrome had him “on all fours after every match and I’m either puking for real or I’m just dry heaving because I don’t have anything in my stomach. I have no appetite. I don’t know what is up and what is down. I can’t sleep. I can’t fucking train.”

WWE has been good about creating concussion protocols and publicizing them, but as Punk’s Rumble experience shows, pro wrestling isn’t easily ruled by codes. You can’t enumerate the protocols without also stating what should happen if somebody gets concussed during an important match. As Punk recounts: “I roll under the fucking corner and I motion to Doc, I go ‘I have a concussion.’ And he was like ‘what do you want me to do?’ And I just started laughing and I was just like ‘Doctor, you are one of the most worthless pieces of shit I have ever met in my entire life.’”

It seems the doctor (or someone) did alert people backstage, since WWE sent Kane out sooner than expected to eliminate Punk — though it also had Kane choke-slam Punk through a table to achieve that result.

On this point, though, Punk’s statements deserve closer attention. He makes the logical connection to the NFL, though he seems to overstate the impact on the NFL, as well as the NFLPA’s success in getting meaningful concessions from the league.

WWE doesn’t do anything to protect the wrestlers; they do things to protect themselves. That sounds really harsh and I stated earlier I don’t want to come off as like ‘bash WWE’ but they don’t let everybody know that they’re doing all these fantastic things for concussions for the boys. They do it so it looks good on them in the public. The NFL is getting fucked in the ass because there is a union for the football players and the union is saying, “You need to pay these guys this much money for medical, for past injuries, whatever.” And the NFL is doing it. The NFL is paying out the ass and Vince doesn’t want to do that so they put all these things in place like “Oh, look, we’re doing all this, we’re doing all that.”

First of all, of course the WWE’s concussion policy is driven by PR concerns. McMahon admitted this when he was asked by a congressional committee why he’s giving out free rehab to former employees: “Two words. Public relations.” And what’s more, that’s exactly why the NFL is doing it too. The NFLPA didn’t clamor for concussion protocols; the public did, and the NFL rushed them into effect to stem the tide of public outrage. What’s more, the NFL is paying a settlement because of a class-action lawsuit filed by former players. The NFLPA is uninvolved, except that it’s now the target of a similar suit.

If Punk wants to throw his weight behind a pro wrestlers union, then good for him. If he wants to support a lawsuit to win benefits for ex-wrestlers with brain trauma, then one of those exists, too. The problem isn’t that nobody knows about these issues, the problem is an industry built on the ethos that Punk himself espouses in the interview: “What would Harley Race do?”

After Punk’s WrestleMania 29 match against Undertaker, he took an extended leave to heal up. “I discovered fucking life,” he said. “And I started looking at my bank account and being like, ‘All right, this is fucking ridiculous. I don’t need to do this anymore. I’ll go work at Starbucks. They’ll probably actually give me insurance.’” Which is true.

Pro wrestlers are independent contractors because of tradition, but in the modern era the designation is sometimes closer to indentured servitude. They have to provide their own health insurance. They accept the contracts they’re offered because there’s almost nowhere else to work, and they’re prohibited from doing any work outside of WWE or accepting sponsorships without WWE’s express permission. They get paid according to an arcane system of base salary plus merchandise royalties plus pay-per-view bonuses; the last two categories are heavily influenced by the mercurial whims of WWE matchmaking, and since WWE Network came into existence and subscribers have been allowed to watch PPVs at no additional charge, the bonuses have largely dried up.

Despite all of this hardship, Punk seems most concerned that he never headlined WrestleMania — “I say it probably 85 percent of the time: I failed at wrestling. I failed at my goal of the main event of WrestleMania.” It’s the Harley Race ethos. When Race was inducted into the WCW Hall of Fame, legendary announcer Gordon Solie said there were two words that could sum him up: “pure dedication.” It’s that dedication that makes a wrestler an all-time great, but it also makes the business impervious to change.

On his last day in WWE, still reeling from the concussion he had suffered in the Rumble, Punk was asked to take the concussion test and a urine test. “I flew off the handle at that,” he said. “I was like, ‘Right now, me, right now, in Cleveland, Ohio, take fucking care of me right fucking now. Don’t worry about where I’m supposed to be tomorrow. Don’t worry about what segment I’m supposed to be. Fucking fix me. My fucking ribs are broken, my knee is fucking torn up, I’m fucking sick. Fucking help me.’”

WWE is getting dogged this week, and justifiably so. Many fans who were incensed at Punk for walking out are back on his side. And yet, as incredible as it is to hear a modern star give voice to the trials that so many wrestlers go through, it’s impossible not to wonder if he could have done more to prevent the same things from happening to other wrestlers. What would have happened if he had done this podcast while he was still a WWE superstar? For all of Punk’s insistence that leaving really meant something (because his departure elevated Daniel Bryan into the main event), you can’t organize a union as a former employee. Which is why it’s hard to think he cares too much when he says, “I would like to see them get some sort of a union for the boys and girls; that way I know they’re serious about protecting them from concussions and other things.” I’m sure he does want those things, but when Punk left, he was leaving for himself.

And he should have. After everything he’d been through, if he was ready to go, I’m happy he found his way out. And who knows — maybe Punk’s podcast will elevate the subject to a level that will force WWE to respond. But judging from McMahon’s reaction Monday night, it seems unlikely.

When Punk wanted to put ads on his shorts and McMahon said no, Punk said he decided “it wasn’t [his] hill to die on, so [he] let it go.” When Punk wanted Chris Hero in the Shield (that was Punk’s idea too) and McMahon said no, Punk backed down because “it wasn’t [his] hill to die on.” Maybe this isn’t either. It’s his life to live, and lord knows he’s lived through plenty. But if the industry’s going to change, if future wrestlers aren’t going to have to kill themselves to get time off, somebody’s going to die on this hill.