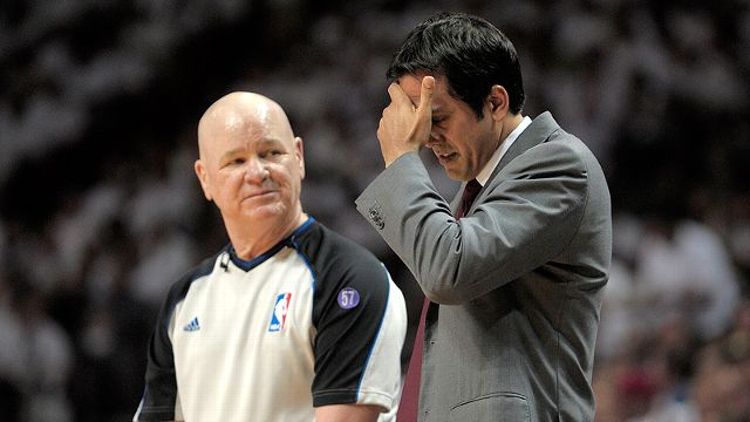 You’ve noticed, if you’ve been watching the NBA’s overlong preseason, that it is dreaded “point of emphasis” time — the phase of preseason in which officials go crazy calling all sorts of things they haven’t generally called much when the games count, but swear they will this season. It’s a warning shot: “Unlearn this behavior now, because we’ll continue punishing you when the real games start.”

And nobody believes it. People within the league are skeptical that officials will stick to these strict new interpretations if doing so slows down games that already last too long. And fans, justifiably, have cried out against zealous enforcement that introduces more pauses into a sport that already has too many — and isn’t meant for such stop-and-start action. The poster children so far have been the comically over-whistled delay-of-game calls when a player on a team that scores a basket touches the ball after it goes in. That’s a clear no-no in the rule book, since a team switching from offense to defense can delay the opponent’s transition game by taking the ball, rolling it toward the baseline, or lobbing it very politely — and very slowly, with a ridiculous arc and softness — to a referee.

Players do that all the time. Ditto for touching the ball between free throws, the subject of a few stray preseason delay-of-game calls. Two seasons ago, an official called a fairly controversial delay of game on Blake Griffin during the fourth quarter of a tight Lakers-Clippers showdown (remember when those were showdowns?), kick-starting a debate on the merits of the general call that predictably faded as fans and media grew tired of it. The call was controversial precisely because it was the correct call. But why did the officials choose that moment to enforce a dormant rule? The appearance of inconsistency and selective enforcement was, and is, an ugly one. Same goes for those rare times when officials have called Dwight Howard for taking more than 10 seconds at the foul line — including a famous Christmas Day instance in which a grinchy Paul Pierce goaded refs into the call by counting down the seconds with his fingers.

The other point of emphasis this season: illegal screens. Teams that feel officials have wronged them can upload video clips of allegedly incorrect calls, or incorrect non-calls, onto a private league website. Illegal screens are by far the most common type of uploaded clip, says Mike Bantom, the NBA’s executive vice-president in charge of referee operations. And so the league is promising to crackdown on illegal screens this season, again.

Screens are boring. They don’t involve the ball, at least not directly, and most of the exciting stuff involves the ball. We naturally watch the ball, and monitoring everything that happens away from the ball requires continuous training and diligence.

But screens, both on and off the ball, are a crucial part of the game. Baseline screens free cutters and curling shooters. Cross screens under the rim give big men space to post up. And perhaps most importantly, screens for point guards on high pick-and-rolls free those exciting little guys to get into the lane and do all sorts of fun things. If offense is fun, and fans like fun, enabling illegal screens to at least some degree is a good thing.

That might be especially so because, despite what every ex-player over 40 will tell you, it’s just as hard to score points today as it was in the “glory days” — and it may be getting harder. Retired players talk about how Michael Jordan could score 40 points a game under the “soft” new rules, which ban hand-checking, punish needlessly hard fouls more harshly, and otherwise prohibit some of the more physical defensive techniques guys could use on the perimeter more than a decade ago.

But no one scores 40 a game today. As Henry Abbott has pointed out at ESPN.com, the number of guys who manage even 20 a game has dropped in the last half-decade or so. Over the last five seasons, teams have averaged about 107 points per 100 possessions, according to Basketball-Reference.com, and the number has generally been dropping. The league average in the mid- to late 1980s hovered around the same 107/108 range. And in the mid-1990s, when the Knicks and their imitators were allegedly ruining basketball, the league overall still eked out an average of about 108 points per 100 possessions.

But anyone who has played pickup ball knows that illegal screens are unfair and painful. And they happen all the time in the NBA. You could probably find an illegal screen somewhere on almost every single NBA possession that is not a fast break. “Listen,” says Jeff Van Gundy. “Kevin Garnett sets an illegal screen in every game. When I was an assistant for Pat Riley [with the Knicks], we fouled all five guys on every possession. We were beating the heck out of people. And pretty soon, you’re able to take liberties maybe other teams are not allowed.”

I’ve pointed out before how defensive players guarding screeners will often blatantly shove the screener in an attempt to dislodge him or even get him to collide with his point guard — a funny bit of rule-breaking officials often miss. “It’s very hard for officials to focus on three or four different things on the same play,” Bantom says. “The referee on the ball is focused on the screener, the defender, and the guy with the ball. And sometimes he doesn’t see that second defender dislodge the screener. We’ve made officials aware of it, and we’re trying to catch all this stuff.”

In discussing that tendency with folks around the league, I’ve often heard versions of the following retort: “Hey, illegal screens are so common now, I don’t blame the defensive guys for fighting back. I’m kind of happy they get away with it.” It’s that bad. The league should move to eliminate illegal screens now.

And so they are. Two points of emphasis are of particular interest: The league is issuing warnings to players who tend to spread their feet far apart on screens, or clasp their hands in the center of their chest and stick their elbows out on either side of their body, further than they’d extend in what the league calls “a natural athletic stance.” In other words: The league does not want screeners making themselves wider than they really are, thus forcing defensive players into taking circuitous routes to avoid elbows and feet.

So here’s the warning: If you extend your feet beyond shoulder length and a defender trips over your foot, it’s a foul this season. Every time (allegedly). And if you extend your elbows in an unnatural manner and happen to hit a defender working to get around you, that’s a foul, too. This is true even if a screener is standing still. Moving screens are a separate matter, and the league is promising to crack down on those, too.

But here’s the interesting thing about the elbows-and-feet enforcement: If a defender does manage to dodge a screener standing with feet spread wide or elbows jutting out, the referees are not supposed to call a foul, the league says. In other words: Do your best Garnett or Glen Davis, plant your feet as far apart as possible, and you’re going to get off scot-free if the defender gets around you without running into one of those body parts.

This strikes me as weird. It almost punishes defenders for being agile. Why does the presence or absence of contact define whether an offensive foul has occurred? Shouldn’t the stance itself determine the legality of a pick? If I try to run you over with my car and you leap out of the way, the police can still charge me with something.

The path to a cleaner game involves an endless slog of foul calls, and that’s why the league tends to abort its trek down that path very early. “How many regular-season games are you willing to sacrifice in order to clean things up?” Van Gundy asks. “How many horrible games are you willing to have in December or January?” Officials are human beings with human biases. They can adjust behavior based upon league mandates.

You can understand the league’s concern with possible over-officiating. They’ve tried to limit replays, and they’ve at least kicked around a bunch of tweaks that would smooth out crunch-time play. The D-League has been a laboratory for some of these things, and it may be again this season. That league has discussed implementing a rule that would prohibit defensive teams from calling timeout before an inbounds pass if the offensive team already called a timeout to set up the inbounds play, league sources say.

But the alternative to reform isn’t just rampant illegality and painful hipchecks. It’s inconsistency of enforcement that will inevitably rear its head at a bad time for the league: when everyone is watching. LeBron James fouled out of Game 4 of the Eastern Conference finals in Indiana last season after officials called him for an illegal screen with about one minute left. That’s about as huge a call as you can make; lots of studies have shown that referees are much less likely to make those kinds of judgment calls against offensive players at the end of close games. And there is mounting evidence already that defensive three-second calls peak in the first quarter and decline much more than we’d expect in the fourth quarter, according to sources who have charted those calls.

And a season earlier, officials essentially ended Game 2 of the Boston-Philly conference semifinals by whistling Garnett for an illegal screen with about 10 seconds left.

Both calls were correct, and yet the league found itself under a firestorm of shrieking criticism: “You never call illegal screens. Why would you change course in one of the season’s biggest moments?” (Side note: Rodney Mott, officiating that same Pacers-Heat game, docked the Heat a timeout because Erik Spoelstra was out on the floor, outside the coach’s box, during game play. But Spoelstra is always out on the floor during game play! So are lots of other coaches. Why suddenly enforce the rule in a crucial postseason game?)

And you know what? That’s a fair criticism. It’s one for which the league is almost entirely responsible. I say “almost” because officiating NBA games is a brutally difficult task, one that robotic technology on its own would not solve with 100 percent accuracy. Combing over every call and non-call in just one game to judge referee accuracy is a 10- or 12-hour job. I’ve talked to people who do it for a living. And after all those hours of dissecting slow-motion replays, there are still some calls and non-calls that amount to coin flips. The shouting from reasonable fans and media will be justified as long as enforcement is inconsistent and somewhat unpredictable. And the shouting from those reasonable parties only enables shouting from the loony conspiracy theorists who think the league is rigged.

The NBA has the power to clean this up, and to clean up the game — but will it?