Better Sooner: How Blake Griffin Became the Most Prolific Interior Scorer in the NBA 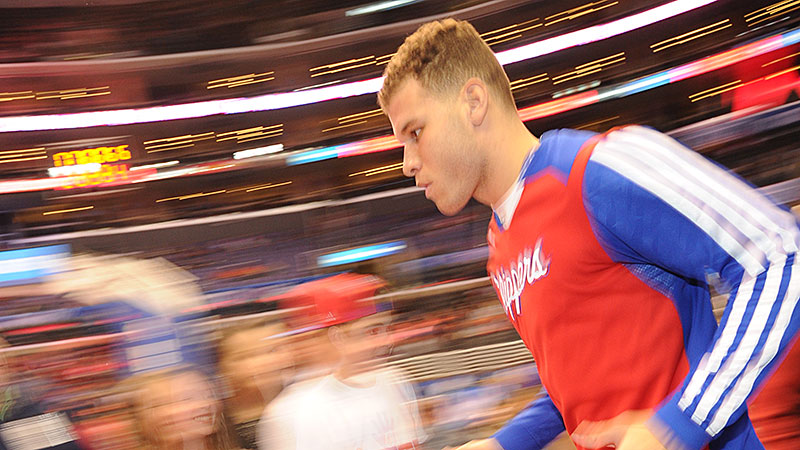 Five years ago today, the Oklahoma Sooners were hosting their bitter in-state rivals in Norman. ABC was in town to broadcast the game. It was the Sooners’ last home game of the year, and it was the last time the hometown fans would ever see their splendid 19-year-old sophomore Blake Griffin playing in their gym; it was a big game.

With 12:50 remaining in the first half, Griffin caught the ball near the left elbow with his back to the basket. He turned and faced his defender. Griffin used one left-handed dribble and arrived at the left block, where he gathered the ball. With 12:48 remaining, he elevated, raised the ball high above his head in his right hand, and threw down a ferocious dunk. I remember thinking, That’s what a lottery pick looks like. That was an understatement. In three seconds, Griffin had converted a ho-hum back-to-the-basket high-post situation into a SportsCenter top play.

Five years later, Griffin is the best above-the-rim post player in the NBA, but he’s more than just that. While many people doubted whether he could become anything more than just a YouTube icon, Griffin is now the best scoring big man in the league, and he’s only getting better. 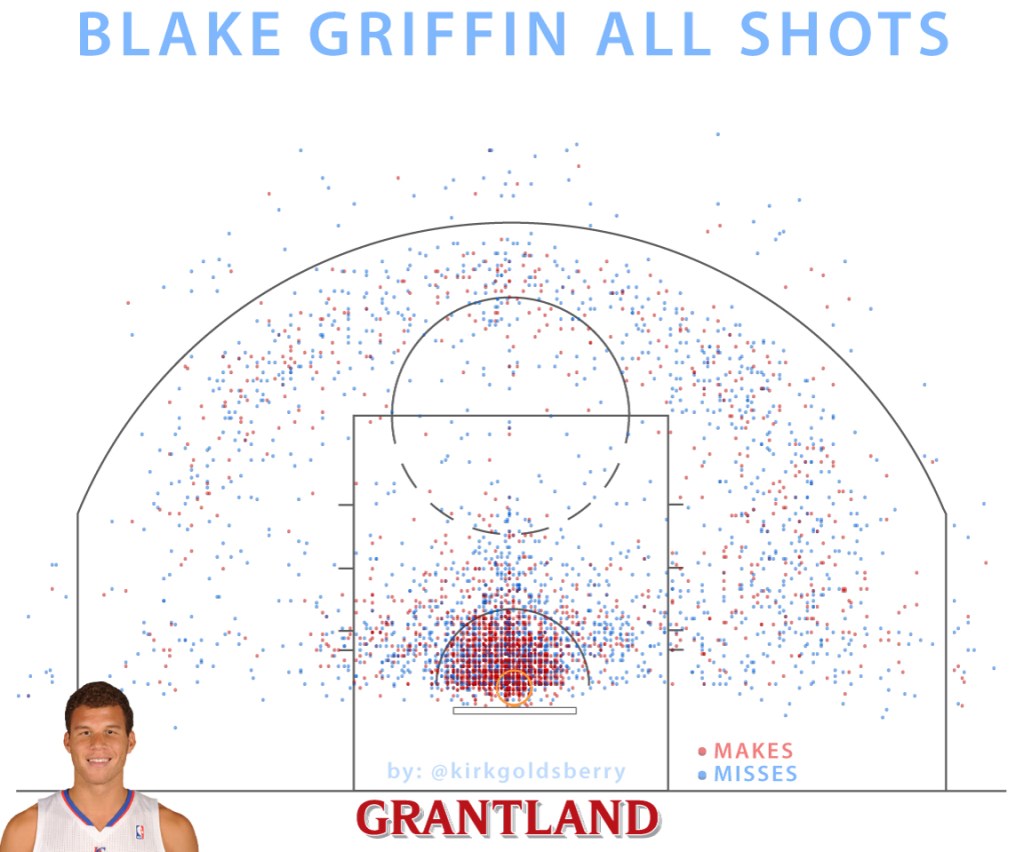 No player this season has made more shots inside of eight feet than Griffin. He’s always been great near the basket, but he is still getting better. His rookie year, he made a solid 59 percent of his close-range shots, and this season that number is up to 64 percent; considering his volume down there, that’s a fantastic clip.

Griffin’s dominance near the hoop is impressive, but it’s not surprising; that’s been his comfort zone since his Norman days. The questions about his game have mostly been about his skill set away from the rim and on defense. One thing that separates good bigs from great bigs is the ability to make jump shots. Guys like Kevin Garnett, Chris Bosh, and Tim Duncan are all able to face up defenders and knock down 18-footers beyond the elbows on a regular basis. Not only do these guys “stretch” the defense, they also play great defense themselves. This is the template for a great power forward in the NBA. As a young player, Griffin certainly did not stretch the defense and he was bad on D.

Away from the basket on offense, Griffin has never been great, but this isn’t unusual in young power forwards. The key questions with him involve trajectories: Is he getting better? Is he diversifying his scoring portfolio? The answers there are definitely “yes” and “yes.” His rookie season, Griffin made only 33 percent of his midrange jumpers. That’s bad; as a whole, the league makes 39 percent of these shots. However, his second season that number rose to 36 percent, and this year he’s at 39 percent. In four seasons, Griffin has gone from a bad jump-shooter to an average one. In fact, he is outshooting LeBron James in the 16-to-24-foot range this season; how come nobody says James can’t shoot?

During the early part of his career, Griffin’s favorite shot away from the basket was in the baseline area, near the left block. That’s no longer the case. In Doc Rivers’s system, Griffin posts up a lot less and faces up a lot more. His new preferred locations are near the elbows, and he takes those baseline jumpers much less frequently. It’s a sign that Rivers is using Griffin in vastly different ways than Vinny Del Negro did. 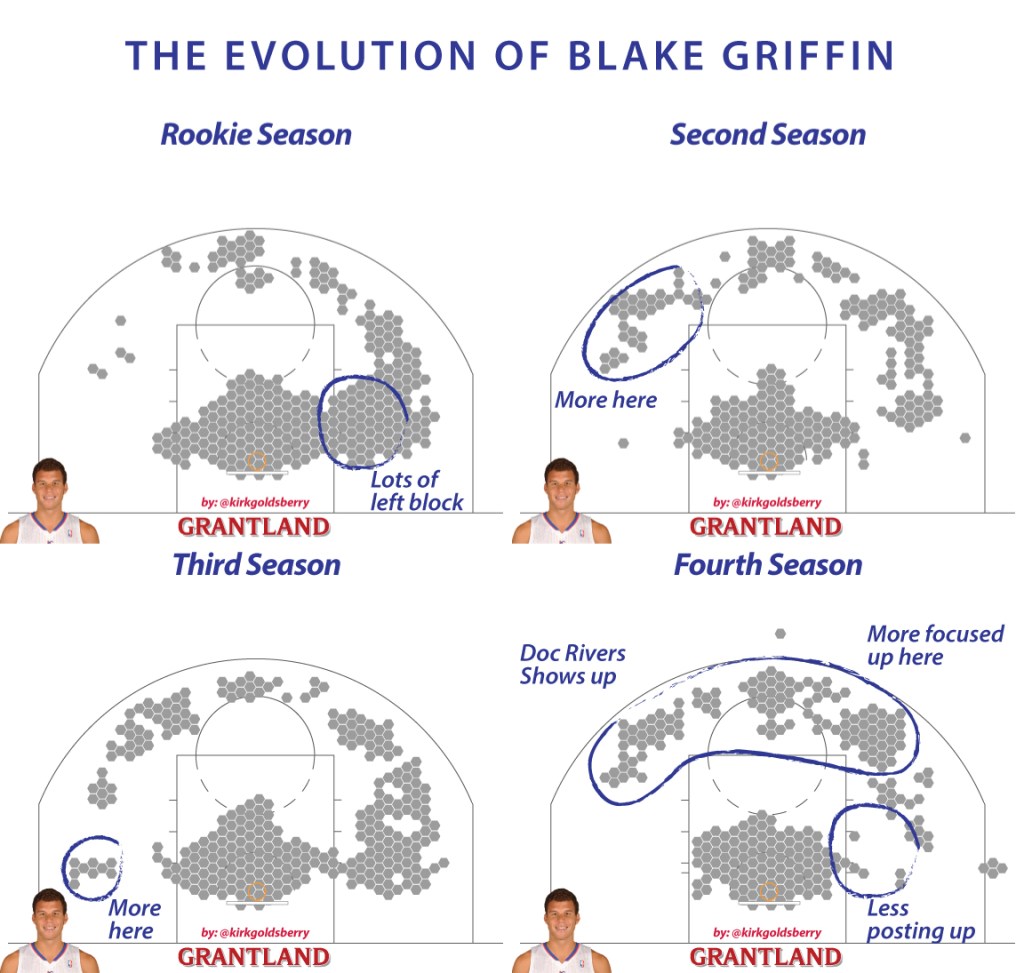 In the Del Negro administration, Griffin was basically a post-up player and a screener on pick-and-rolls. But this season, Griffin’s role is more diverse. His teammates set screens for him, freeing him up near the basket and near the elbows. More than ever before, Griffin is a playmaker, and can also take advantage of his penetration and passing skills. As a result, his shot chart has changed. Of course he’s still consistently active near the basket, where he excels, but his behavior in the midrange continues to migrate away from the baselines up toward the elbows.

Five years after his last game in Norman, Blake Griffin has become the most prolific interior scorer in the league. Sure, he still may only be an “average” jump-shooter, but Rome wasn’t built in a day, and the road that connects bad to good almost always has to pass through “average” along the way. That’s where Griffin’s jumper is right now. There’s still room for improvement, but for a 24-year-old power forward who can still jump out of the gym and dominate the restricted area, an average jumper is good enough for now.

“They’re trying. It’s not like they’re not trying,” D’Antoni said, protective of his players to the end.