Best/Worst: A Quick Break From Everything That’s Horrible 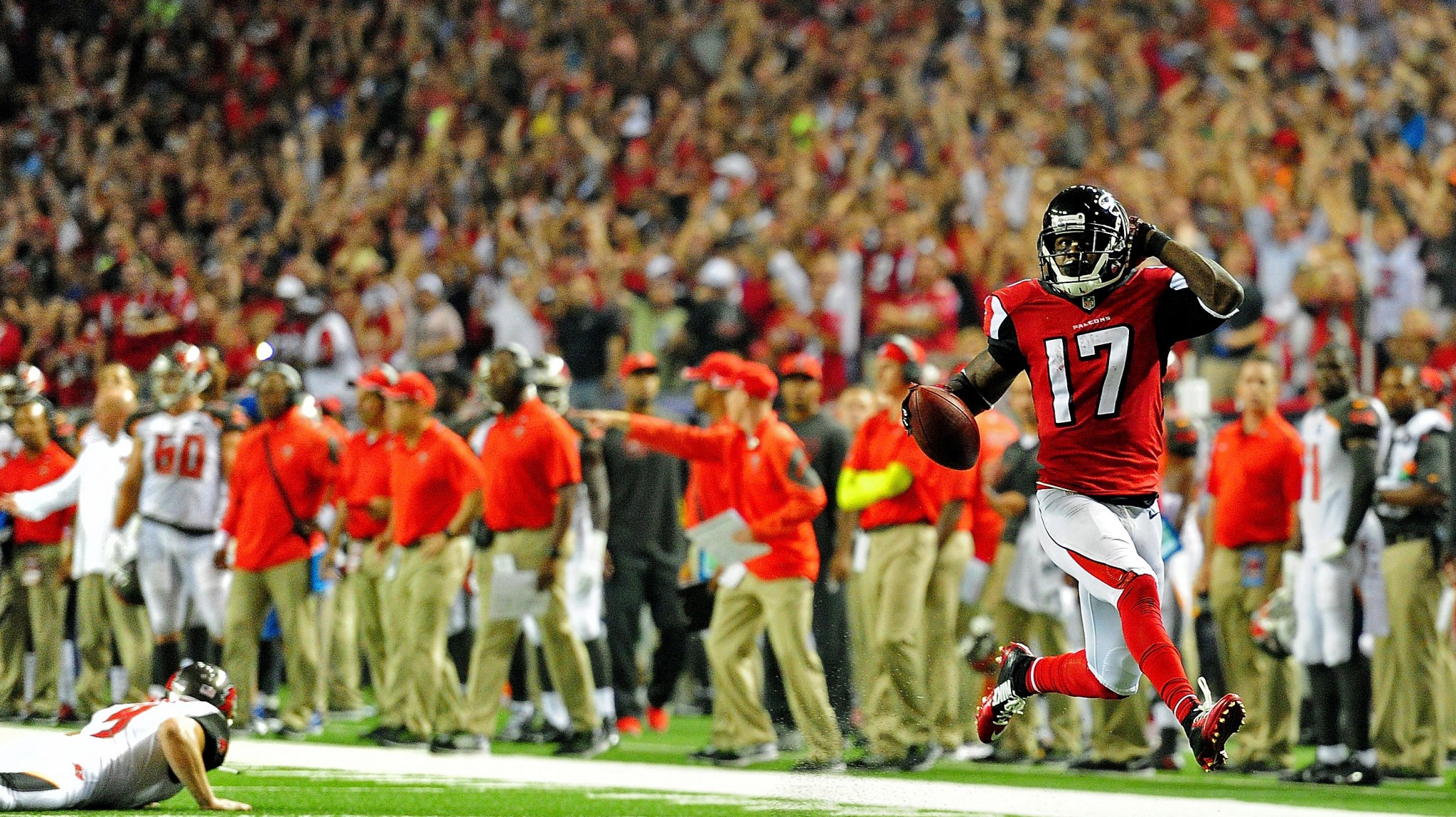 It’s been too long since we had a weekly wrap-up, so I’m bringing back Best/Worst. But there is one problem. Almost everything has been the worst this week. Earlier this year, this column started as a roundup of everything that makes us love sports, and then everything that makes us wonder why we even watch sports. For the past two weeks, one side of that equation has been DOMINANT. Like the ’85 Bears, 1991 UNLV, or the Niners in that one Super Bowl against the Chargers, worst is putting on a clinic right now.

The ESPN news ticker is just a nonstop crime blotter interspersed with official apologies written by PR firms. The news box on any major sports site features at least four stories that make sports seem like some futuristic hellscape, and all of this overshadows the actual games; it’s so ugly that talking about games is impossible. We’re living the opening montage of BASEketball.

So with that in mind, let’s skip the “worst” side of things today. You can find that everywhere else. Let’s just go with a handful of humans and stories that didn’t suck this week. Here are eight examples.

Everyone had a collective meltdown over Sproles on Monday night, so there’s no need to rehash what was already said. I think that was the first time since the second Ray Rice video broke that people were actually talking about football. Then came Hester last night, high-stepping his way into the record books with the Deion homage.

I wrote about Hester six months ago, after he got cut by the Bears: “When you think about it, Hester’s a guy who had no business playing a decade as a star in the NFL, but somehow pulled it off anyway. He had one skill — otherworldly speed — and best-case scenario, he fit the exact profile of a guy who explodes as a return man for one or two years, the league figures him out, and then he just disappears. But that never really happened.”

And it still hasn’t happened! Watch that interview with Deion last night. It starts out funny, then gets genuinely emotional.

In the spring, I was fully prepared to never again watch Hester embarrass some helpless punter, but there he was last night, twisting the knife a little deeper while the Bucs disgraced themselves on national TV. He’s so good that Jim Nantz didn’t even scold him for the celebration. Everybody loves Devin Hester. He’s the Darren Sproles of kick returners.

Did you read Woj after the FIBA Basketball World Cup? It was maybe a top-five Angry Old Testament Woj column — the kind of Woj column I’ll tell my kids about one day. This one time … Team USA won the gold medal, and instead of enjoying it like everyone else, Woj decided to write 2,000 words for a truth crusade against Coach K and everything he stands for.

When Team USA goes to the U.S. Military Academy to practice on its pre-tournament tour, guess what the stories are: Krzyzewski returns to his West Point roots. There’s Coach K with the cadets. There’s Coach K in the mess hall. There’s Coach K teaching those rich NBA players about sacrifice and selflessness. People call Calipari the greatest self-promoting coach of his time, but Krzyzewski doesn’t get nearly the credit due him.

As long as Krzyzewski needs recruits at Duke, he needs USA Basketball. Why sit in the steamy summer-circuit AAU gyms trying to make eye contact with 16-year-olds, when you can use the media to write about all the close, personal relationships you’ve developed with LeBron and Kobe, ‘Melo and Kevin Durant? Hey kids, Krzyzewski even texts them during the season – maybe sometimes right after he texts you!

As the hours passed that August night, Krzyzewski changed the conversation about his involvement in the NBA losing a $100 million star in a worthless scrimmage. At the foot of George’s hospital bed, someone had been waiting to snap the photo of the U.S. national coach reaching down and embracing his stricken player.

Plenty of this was way over the top, but that’s what made it so amazing. For one thing, Woj was complaining about “veterans” playing for Team USA. Um, Paul George is 24. He was also complaining about Coach K using this for recruiting, even though he names several other coaches (Jim Boeheim, Billy Donovan, Shaka Smart) who are just as involved. But then, the faulty internal logic just adds to the spectacle.

Some of the criticism was dead-on and necessary, about the grandstanding trips to the U.S. Military Academy, the unbearable praise lavished on this “savior” — when in reality USA basketball turned around once stars like Kobe and LeBron started playing again — or even the nonstop quotes from Coach K that sound like they were ripped straight from an American Express commercial. (Wait, that’s my criticism, not Woj’s. Either way.) The Coach K hyperbole is a lot to handle, so getting some unfair criticism in the other direction seems OK.

The best part of this is that Coach K responded directly to the column:

“That that [access] gives you an advantage — it’s utterly ridiculous — and anyone who comments on it without doing the research is really wanting to take that point of view,” Krzyzewski said. “I don’t get it. I don’t get it. We’ve won four national championships.”

“On Aug. 24, 2008, and the score is 91-89 in the gold-medal game against Spain, if Kobe Bryant doesn’t hit a couple shots, and Dwyane Wade — do you think I’d have an advantage? Because we would lose,” Krzyzewski said. “The point I’m making is anybody who wins … they have an advantage. But it’s advantage through accomplishment.”

Coach K: "If you think I orchestrated (moment/photo) with Paul George, then you are a bad person."

The hate is spectacular. I’m just glad we all got to witness it. It’s something I’ll tell my kids about. Then they’ll be like, “Wow, people really used to spend their time online caring about what some random columnist wrote, and how some coach responded to it?” My kids would have a point! But there’s no greater honor than being called a bad person by Coach K. That’s what the rest of us are chasing.

Remember when we used to have ridiculous Nike commercials every other week? I miss those days. The rise of the Internet has eliminated most of the need for 90-second mini-movies that make sports and athletes look 10 times cooler. But that just makes it 10 times cooler when we get one. Even if it’s starring Derek Jeter.

This isn’t quite as great as Jordan Brand’s #RE2PECT ad that debuted during the All-Star Game, but it’s still great enough to make me nostalgic for a player I’ve loathed for almost 20 years. Marketing is amazing.

Skip to the two-minute mark to hear Dirk Nowitzki cover David Hasselhoff on a German talk show, and remember that Hasselhoff is a legend in Germany, and remember that the world is a wonderful place. Also, here’s Nick Young talking about the Lakers’ season, and Lakers rookies revealing that Young has demanded they call him “Daddy Swag” all year long. The world is a wonderful place.

Still’s 4-year-old daughter has Stage 4 neuroblastoma. Still and the Bengals are raising money by donating the proceeds from all his jersey sales to pediatric research. You can buy a jersey here to donate to Cincinnati Children’s Hospital. Last week, Sean Payton found out about this and decided he needed to donate as well. He bought 100 jerseys for $10,000, and donated them to children in Cincinnati. Meanwhile, Still and the Bengals have raised more than $500,000, and as this gets bigger there’s no telling where it ends.

So … See? Not everyone in the NFL is terrible!

Most of them aren’t, actually.

You know its not that hard get!!!! Keep your damn hands off women!!!! God made women for you to Lean on them Not beat on them #RealTalk

The last time me and my wife were in elevator heading to our hotel room!!! We got this guy 9 months later.. #Realtalk pic.twitter.com/LV6P6uOrT5

If I ever give up pro football for real, it’ll probably be because Steve Smith isn’t playing anymore. But that’s cool, because everyone knows that Steve Smith is going to play forever.

Forget arguing about Jameis Winston this weekend; reading this oral history of the 2001 Miami Hurricanes is a much better way to spend 20 minutes. Likewise, I don’t think I’ve read a story about the PGA Tour in five years, but this story about Anthony Kim and why he left the PGA Tour was probably the craziest thing I read this week.

8. Biggie and the Knicks

BIGGIE. AND. THE. KNICKS.

In that interview on ESPN’s Highly Questionable, John Starks was asked about Biggie’s song “I Got a Story to Tell.” On this track, Biggie raps about sleeping with the girlfriend of a Knicks player during a Knicks-Jazz game. Then the Knicks player comes home while Biggie’s still there, and Biggie robs him.

I didn’t watch this interview until 1 a.m. Thursday morning when I couldn’t sleep. That’s when I wound up on this message board full of people trying to figure out what Knicks game Biggie could have been talking about. Starks confirmed to Bomani Jones and Dan Le Batard that the story was at least partly true, so … when could it have happened, and who did it happen to?

There were two Jazz games for consideration here. One was in December 1996 and featured Allan Houston, who’s long been rumored as the subject of this song. HOWEVER … As a message-board poster points out, Biggie’s album was already slated for release that October, and it had actually gotten pushed back to March.

The other? December 1995. Look at the box score. The player apparently came home early, too, so he probably wasn’t playing in the game. Of the players who didn’t play that night, there’s current Pelicans coach Monty Williams and Doug Christie. Credit to poster Raquinotj for uncovering this. And note the lyrics:

I’m not saying I agree or disagree with this theory. This incident could have easily happened in ’93 or ’94. We’ll probably never know the truth, unless Starks decides to break the mid-’90s Knicks omertà. But it’s great that we are having this conversation.

Sports have been miserable for the better part of two weeks, and in that case, there’s no better escape than going all JFK conspiracy over which Knicks player’s girlfriend Nortorious B.I.G. slept with 20 years ago. We needed this now more than ever. Thank you Highly Questionable, thank you message boards, thank you John Starks. And obviously, thank you Biggie.

The Grantland NFL Podcast: Analyzing Buccaneers-Falcons and Previewing the Rest of Week 3