For the Ravens-Steelers Sunday-night game in Baltimore in Week 9, NBC might as well have broadcast a bonfire. Ben Roethlisberger threw for six touchdown passes for the second time in as many weeks, as the Steelers hung up 43 points, the best single-game total in the rivalry’s (relatively) short history.1 Despite the outlying nature of the result, it was easy to see why Pittsburgh had so much success.

Pittsburgh hadn’t even scored that many against Baltimore over two regular-season games in seven years.

After an injury to cornerback Jimmy Smith, the 2011 first-round pick who’d finally begun to hit his stride, Baltimore became desperately thin at cornerback. Dominique Franks, who started in Smith’s place in Week 9, was scorched so badly by Antonio Brown & Friends that he ended up getting cut two days later. For the rest of the season, the Ravens played Lardarius Webb and Who’s That Dude? at corner, rotating through a group of anonymous names like Anthony Levine, Danny Gorrer, Asa Jackson, and Rashaan Melvin. The final three weeks of the year were a brief reprieve — Blake Bortles, Case Keenum, and, seriously, Connor Shaw in consecutive weeks — but with the playoffs and a warpath through Roethlisberger, Andrew Luck, Peyton Manning, and Tom Brady standing in the way, it felt like everything would soon come crashing down beneath a hail of downfield passes.

Through at least one postseason game, though, they’ve been all right. Roethlisberger threw for 334 yards in the Steelers’ 30-17 wild-card loss, but much of that came in the second half, with Baltimore decidedly in control. A few members of the Baltimore secondary even had decent days, including safety Will Hill, who, when he was able to stay on the field, often performed for the Giants. But the main lesson from the Ravens’ win is that as long as their front four2 play like they did Saturday, they could replace Danny Gorrer with Danny Glover and everything would be just fine.

Or five, I guess, depending on how you look at it.

Baltimore hammered Roethlisberger, sacking him five times, hitting him five more, and causing genuine discomfort all night. What the Ravens showed on Saturday is that through a combination of front-line depth, talent, and a scheme that utilizes both of those things, they can slow down pretty much anyone. 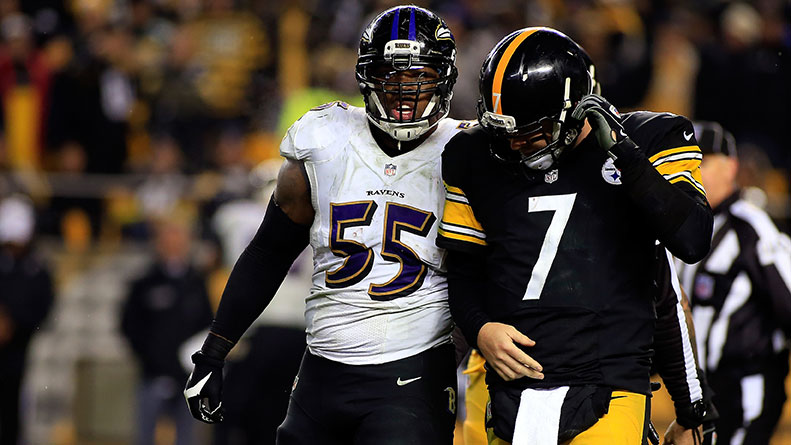 It all starts with the outside linebackers. The praise Tom Brady heaped on Terrell Suggs this week felt like pure, distilled Belichick, but he wasn’t wrong. Suggs doesn’t look like a guy just trying to make it through the final weeks of his 12th season. He did a little bit of everything on Saturday, including some good work dropping into coverage that eventually ended with an interception. Across from Suggs, Elvis Dumervil is having the best season of his career. He finished the regular season with 17 sacks before adding two more against the Steelers, and in terms of pure pass-rushing threats, he’s just a notch below the J.J. Watts and Justin Houstons of the world.

Finding two pass-rushing linebackers isn’t easy, but plenty of teams manage to. What makes the Ravens uniquely dangerous is how they build around those guys. For example, Baltimore took Pernell McPhee in the fifth round of the 2011 draft. The 26-year-old is a 280-pound sort-of linebacker, sort-of defensive end in the Ravens’ scheme, and this season he’s become an all-purpose defender, shifting his role depending on situation. You’ll occasionally see him spelling Suggs outside on early downs, but what really makes the Ravens a nightmare is how they use McPhee in obvious passing situations.

The Ravens have too many different looks to count, but when it comes to pure pass rushing, this is easily the scariest. Suggs and Dumervil line up wide, with McPhee standing up as a 3-technique tackle over the left guard, and Haloti Ngata mirroring him on the other side. The Steelers identify McPhee as a central threat, and against a guard, he is. Pittsburgh slides Maurkice Pouncey in that direction to provide help, which leaves both Ngata and Dumervil one-on-one. Ngata crashes hard inside, leaving Dumervil with a city block in which to attack Marcus Gilbert. I know it may be hard to believe, but that ended miserably for Pittsburgh.

Dumervil’s move on Gilbert — and really, it’s something he’s done all year — is a good reminder of how luck influences the makeup of every team. Baltimore’s entire plan on this play is constructed around Dumervil’s ability to take advantage of Gilbert. If the Broncos and Dumervil knew more about fax machines, this wouldn’t even be an option. Outdated technology might just swing the AFC playoff race.

Despite all of this talent at his disposal, Dean Pees, Baltimore’s defensive coordinator, isn’t afraid to get weird. On the above play, the only player between the tackles is Ngata, who has two linebackers flanking him way outside in both directions. The action on the offense’s left — with C.J. Mosley and Suggs — is more of a distraction than anything, a way to occupy bodies and maybe bait Roethlisberger into throwing hot without seeing Suggs drop into coverage.

The real threat comes from the other side, with McPhee looping around Ngata. It’s a good example of how scheme and talent often work in tandem. Any defensive coordinator can draw this up, but if he doesn’t have the players necessary to make it work, the planning doesn’t matter. Ngata — who was an absolute monster in his first game back — demands attention and resources, and he gets both as Pouncey completely turns his body, even as Ngata slants away from him. That leaves space for McPhee, who’s quick enough to take advantage of the alley Ngata creates for him.

Baltimore’s outside depth and creativity are matched — and maybe even exceeded — by what’s inside. Getting Ngata back, especially as a pass-rusher, obviously helps, but the Ravens can trot out at least four other useful players on the interior. My favorite of those is second-year nose tackle Brandon Williams, whom the Ravens took out of tiny Missouri Southern State in the third round of last year’s draft. He barely saw the field as a rookie, but in Year 2 he’s been the centerpiece of Baltimore’s entire run defense.3

The fifth-rated run defense in football, by DVOA.

At 335 pounds, a reasonable expectation for Williams would be “space eater,” a player who chews up blocks to help free up linebackers Mosley and Daryl Smith to clean up plays near the line of scrimmage. But instead of just chewing up blocks, Williams does the cleaning up, too. Below, Williams takes on a double-team before shedding David DeCastro and dropping the running back for a modest 2-yard gain. It’s a remarkable play, and it’s one Williams makes at a truly ridiculous rate for someone his size.

Throw in Timmy Jernigan — who’s been great in his limited snaps this year and could play on Saturday against New England — and Chris Canty might be only the Ravens’ fourth-best interior lineman on the field in Foxborough. That’s not a bad place to be.

Over the past decade, the Patriots have made a living of taking advantage of what other teams do poorly, and there’s a good chance Bill Belichick and Tom Brady will have some ideas about how to exploit whichever former practice-squad player lines up at corner for the Ravens. But New England has weaknesses of its own. The Patriots were shuffling their offensive line as recently as Week 16, when 2013 undrafted rookie Josh Kline took over for Dan Connolly at left guard. And while these offensive-line concerns may not be as alarming as they were early in the season, it’s not hard to envision the Patriots having a rough day against the Ravens front. Baltimore built this defense around a deep and terrifying collection of run stuffers and pass-rushers, and on Saturday, there’s a chance that’s more than enough.