Beginning in the late 16th century, England quaintly conquered much of the known world, charmingly crushing hundreds of millions of people under an imperial yoke that, on the one hand, spread a fair amount of misery and destruction, but on the other, also led to a marvelous uptick in the adoption of picturesque lawn sports. Redcoats razed foreign villages, while back at home ladies in white dresses swung wooden rackets as the golden light wafted through the leaves. Pock, pock, pock, went the rackets, and so did the cannons, in a slightly different tone.

It was a magical time. Gentlemen, having been schooled in fair play on the playing fields of Eton, were honest, forthright, and chivalrous, and the money just kind of accumulated, who even knows how, maybe something to do with Nepal. Light carbonation, having been introduced into beverages, fizzed through the green afternoons. Tennis was the preserve of lords and ladies and anyone else rich enough to grow the right kind of moustache. If there was unpleasantness somewhere, it was the best sort of unpleasantness, the sort that doesn’t affect you.

But everything changes, even in Merchant Ivory films, and in these days of representative democracy and people shaving letters into the sides of their heads, the old magic is in rather short supply. Perhaps only at Wimbledon can it still be found — Wimbledon, where one wanders the grounds amid purple-dappled flowers and Ralph Lauren–dappled stockbrokers and feels certainty enfolding one like ermine. Something is wrong, but ahh … not for me. The linen crinkles. The clouds form pleasing shapes. Also, the tennis is quite good. The sun eventually did set on the British Empire, but the lights over Centre Court are as bright as three o’clock.

The regal best of Wimbledon was on display this afternoon during the men’s semifinals. Here, to choose a nice round number, are 736 things I learned from watching.

1. Can we talk about Gasquet’s backhand? Everyone wants to talk about Gasquet’s backhand. It’s a perfect little poem of a shot, a languidly blinding one-hander that generates overwhelming topspin and power. How he has time to hit it is a mystery; his backswing is so high and involves such a full twist of the torso that he shows both shoulder blades to the ball. Then, crack, he uncoils, and the amazing thing is the utterly unhurried-seeming way in which he generates the extreme rotational speed and forward-upward weight transfer necessary to catch the ball with maximum force on the downswing. It’s like watching an unlatched gate whip open in a strong wind. It’s astonishing, and even more astonishing when you realize how much variety and disguise he can add to the shot by flicking his wrist and varying the height of the impact point. Tennis aesthetes like to mourn the decline of the one-handed backhand, but it’s still possible to find beautiful examples in the wild, Federer’s and Wawrinka’s most famously. With its combination of control, power, timing, and grace, Gasquet’s may be the loveliest of them all.

2. But yeah, no, Djokovic is still just much, much better at tennis.

3. When the gods of sport lifted these two champions from the seafoam, they created two very different players. One is easy, elegant, and refined; the other is dour, shaggy, and arduous. One is steady and self-assured; the other is erratic and self-contradictory. One is prim, formal, and maybe a little stuffy; the other is British.

4. Heading into this match, Murray had spent 11 hours and two minutes on court during the tournament, Federer just seven hours and 51 minutes. The discrepancy underscores the pitiless efficiency with which Federer rolled through the early part of his — pretty weak, it has to be said — draw. But what I’m wondering is: How did Federer pass all that extra time? There are a few obvious possibilities.

5. For a straight-set victory in which one player more or less dominated, that was a fantastic tennis match. On paper, Federer’s 7-5, 7-5, 6-4 win might look pretty straightforward; in practice, it was fascinating, much closer than the score suggests, and played at a phenomenally high level. Just a gripping, back-and-forth encounter in which Federer happened to be a little better in a few key areas. Federer-Murray is maybe the most underrated rivalry in tennis, and this semifinal showed why: They’re closely matched, they’re two of the smartest players on tour, and they bring out the best in each other. Federer beat Murray several times in a row last year, including 6-0, 6-1 at the ATP World Tour Finals, but that was during Murray’s post-surgery malaise; this afternoon, even in losing, Murray showed that he’s back at the top of his game. Who cares, really, whether the English like him? Tennis fans should adore him, at least as long as he’s helping to create matches like that.

6. I really never expected Federer to adopt the sports-henley look, but he pulls it off, I think? Look, at this stage, Roger is so in command of all-white athletic clothing that he’s out there toying with degree-of-difficulty multipliers. Anna Wintour is in on this, mark my words. Next year he’s coming out in white jorts.

8. Has anyone ever been better at court coverage while looking like they’d be worse at it than Murray? Between points, he’s so janky and awkwardly put together, like his shoulders don’t fit on his skeleton; then the return comes sizzling back and all of a sudden he’s scrambling from one sideline to the other in 0.0023 seconds. Even still, he moves jarringly. It’s like watching a slow train chugging in fast forward.

9. That amazing first-set shot of Princess Michael of Kent leaning over the railing trying to catch an incoming ball. Royals: They’re slightly less coordinated than us! 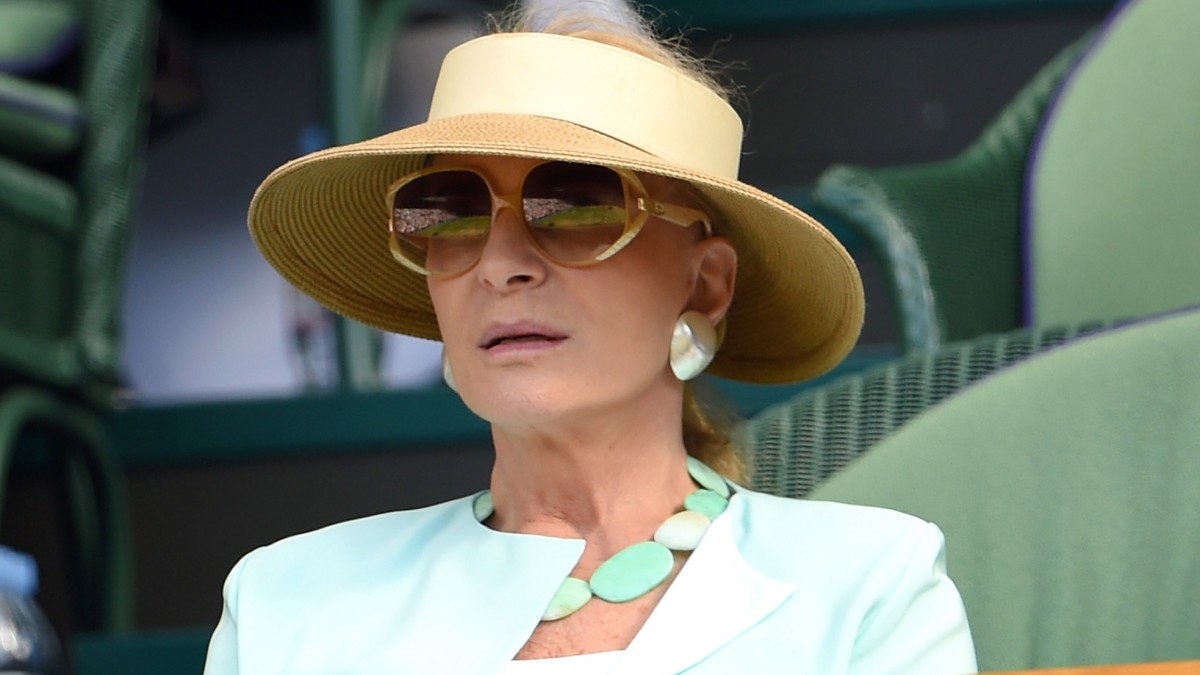 10. Murray’s second serve, never the most fearsome of scimitars, failed him at some pivotal moments, including one at 5-6 in the first when Federer pounced on a weak ball to win two break points. They’d been evenly matched up till then; just that one crack made the difference.

11. But then, at 4-5 in the second, with Federer sitting on three set points, Murray made an adjustment: Federer had been trollishly running around Murray’s second serves and murdering them with forehands, so now Murray floated one down the T, leaving Federer totally out of position. Federer quickly modified his return position to allow for the faint possibility of a backhand, but that one second-serve ace extended the game and kept Murray alive in the set. It didn’t end up mattering, but still, a fascinating insight into how a great player tries to think his way out of his weaknesses.

12. You know how Murray’s wife, Kim Sears, is a professional pet portraitist? This is unquestionably the greatest fact in tennis. I’ve gotten into the habit of charting Murray’s matches based on the pet portraits Kim Sears would paint to capture their emotional turning points. So, like:

13. God, I love watching Federer go for broke. In the same way that peak Nadal always made matches more intense by turning them into grueling epics, the late-career, net-charging Federer we’ve seen in this Wimbledon makes them more intense by turning them into rapid-fire exchanges of angles. Which, of course, is a game Murray is capable of playing at a very high level.

14. This also is a fun strategy for Federer because it makes him look young (quick reactions! Aggressive sprinting!) while also keeping the points short, which is handy when you’re 286 years old.

15. And on the other hand — oh wow, some of the baseline rallies in this match. Did I mention that I love this rivalry?

16. Like, in that huge multi-deuce game in the second set, with Murray serving, Federer hit a cross-court forehand winner that was just so good. It was so good. I am a professional tennis writer. That is my analysis.

17. There were, unbelievably, somehow, a few moments when Murray won a point at the net. It’s not like his game can’t go to that dimension, but still; in this match, it felt uncomfortable, like watching a man peacefully eating a cigar.

18. One talking point before the match was how Federer’s serve would hold up against Murray’s all-world return. Federer hit 20 aces and faced only a single break point, so … pretty well, I guess?

19. Amélie Mauresmo should face severe criticism for the way Federer played borderline unbeatable tennis today. If Murray had a male coach — one with whom he could discuss tactics in a towel without empinkening the English tabloid press — Federer would have played much, much worse. Look at that man in his box, Roger would have thought. Oh, but I am in trouble.

20-533. This will be controversial in some quarters, but I’m giving Murray’s self-castigations, facial tics, fists raised against an uncaring God, shoulder slumps, sighs, low whistles, Presbyterian cheek-sourings, and shrieked personal soliloquies only 513 slots. He kept it pretty well together. A low-key dramatic performance from El Muzz.

534-735. Can we pause one more time to appreciate how great this match was? It’s worth at least 200 or so places. Yes, it went only three sets. Yes, Federer never really faced any danger. But it was a gallery of everything modern grass-court tennis can be. Old-fashioned serving-and-volleying counterbalanced by brawny slugfests at the baseline. Physical problems solved at high speed in thrillingly unexpected ways. Small, pivotal moments — a weak second serve here, a screaming winner there — ramifying outward to affect the match in large ways. The quality of the points averaged out around superb and frequently hit sublime. “I was screaming inside of myself,” Federer said afterward. How often do you think Federer screams, even inwardly? As ridiculous as Wimbledon can be, as vulgar a catwalk for the aesthetics of privilege, as long as it gives you tennis like this, you have to admit that the earls are onto something.

736. And so we get a repeat of last year’s final, which Djokovic won in five sensational sets, 6-7(7-9), 6-4, 7-6(4), 5-7, 6-4. Federer is better than he was last year, and playing a game more ruthlessly adapted to the occasion; still, it’s hard not to see Djokovic out-blasting him over four or five hours. Then again, I never expect Nole to lose in major finals, but he does it kind of a lot anyway. Djokovic won’t sit back on the baseline against Federer the way Murray did, so this could be a match where the contestants end up sword-fighting at net with their rackets. A duel, then, like in the old days. Stiffen your moustaches, my compatriots. En garde.