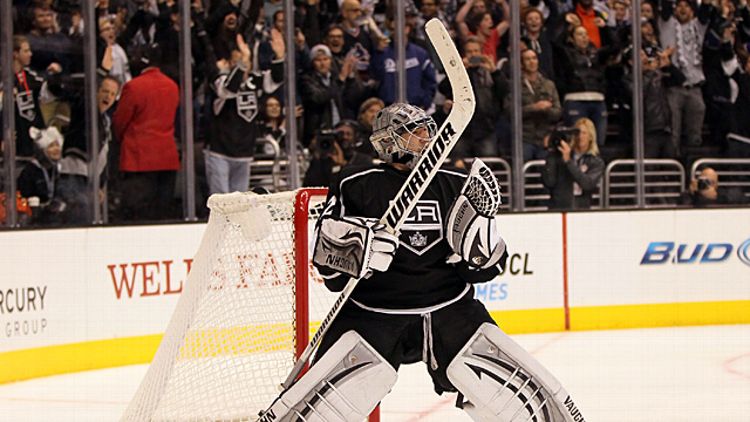 Just when we thought we’d seen it all in NHL shootout action, Alex Burrows proved us wrong. Plenty of players have used the ol’ spinorama in a shootout. But none of them ever came up with that whole “ignore the puck entirely when you do it” angle that Burrows broke out Monday:

Presumably, Burrows was hoping Kings goalie Jonathan Quick would be so mesmerized by his moves that he’d vacate the net entirely. Quick refused to bite, unlike some people we could mention.

So yes, the move was a disaster. (And be sure to check out this fantastic frame-by-frame breakdown of Burrows watching the replay.) But in a sense, you can understand what happened here. During regulation play, a breakaway is almost by definition a surprise play that develops in an instant. There’s a smart breakout pass or a great individual effort or a bad turnover, and suddenly someone’s in all alone. At most, that player gets a few seconds to decide what to do. Instinct takes over.

But when the actual hockey game is over and the convoluted individual skills competition starts, players suddenly have time to think about what they should do. And in some cases, as Burrows showed us, they can use that time to over-think things.

But it doesn’t have to be this way. By following just a few simple rules, players could avoid becoming the next Alex Burrows. All they need to do is know their history, learn from the mistakes of others, and observe the 10 Commandments of NHL Shootouts.

I: Thou Shalt Skate as Fast as Thou Can

Fun fact: The first shootout in NHL history took place on October 5, 2005, in a game between the Senators and Maple Leafs. Ottawa won, thanks in part to Daniel Alfredsson scoring the first-ever shootout goal.

But that’s not what fans remember from that game. No, they remember Jason Allison.

Why? Well, let’s put it this way: Jason Allison was a former All-Star and Boston Bruin captain who once recorded 95 points in a season, but when you search for his name on YouTube, this is what it tries to auto-fill: 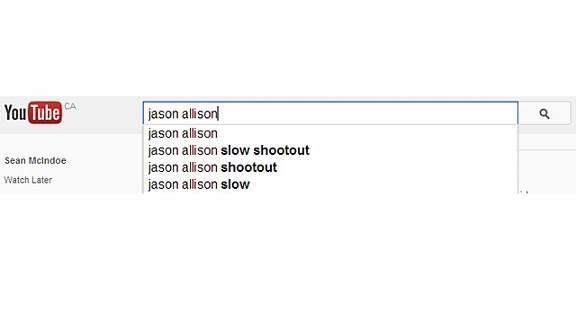 Yeah, Jason Allison’s shootout attempt was a little on the slow side. In the time it took him to make his way to the net, Dominik Hasek retired and announced a comeback three times. And Leafs fans have never forgiven him.

For years, you couldn’t even find the attempt on YouTube, presumably because site once had a strict 15-minute limit on videos. It is there now, but I don’t recommend watching it since Allison’s attempt really isn’t as bad as everyone remembers, and it’s never a good idea to let reality get in the way of a good loathing.

That’s it, steady as she goes, all under control, just need to try this backhand/forehand move that I saw one of the other guys do and … I appear to be airborne for some reason.

(That guy just got $26 million from the Calgary Flames, in case you were wondering.)

III: If Thou Doth Fail to Stay Upright, Thou Shalt at Least Look Suitably Embarrassed

You just wiped out in front of thousands of people and the clip of it is going to have a million views on YouTube by tomorrow morning, so don’t bother trying to shrug it off like it’s no big deal. You might as well cap the whole thing off by sliding face-down on the ice for a while.

I’ve mentioned this before, but holy crap, maybe show a little mercy there, Montreal victory horn guy. Have some decency. A man’s self-esteem has just died.

IV: If at All Possible, Thou Shalt Be Pavel Datsyuk

Really, you should definitely try this. Apparently it makes scoring in the shootout like 500 percent easier.

Please note that the third goal in that video is the only known example of a real-life player successfully executing the “deke and then wait for the goalie to slide into the corner for no reason” move from NHLPA Hockey 93.

V: Thou Shalt Not Be Wayne Gretzky If It’s the Olympics

Sorry, I’m Canadian. We’re still a little bitter about that.

VI: Thou Shalt Realize That If the Scouting Report Says the Goalie’s Weak Spot Is the Corner, They Are Probably Referring to the Net and Not the Rink

Wow, first we had the “sliding goalie” move, and now we get the “guy who gets the pass button mixed up with the shoot button” play. We just need someone to break out the “knock the goalie out of the way on a cheap wraparound” and we’ll hit the EA Sports hat trick.

In fairness, Rinne did leave that area wide open.

VII: Thou Shalt Maybe Ease Up on the Whole Forsberg Move Thing

In the 1994 Olympics, Peter Forsberg helped Sweden win the gold medal by breaking out a move that many hockey fans had never seen before.

It’s hard to describe how jaw-dropping that move was at the time — the moment is so famous that Sweden even produced an official postage stamp to commemorate it. To an entire generation of hockey players, the one-handed self-pass tip-in became known as the Forsberg Move.

That was almost 20 years ago. Since that time, do you know who else has used that move?

Everyone does this move now.

Seriously, we get it. The Forsberg Move is the “having a mobile phone” of the hockey world — shocking and innovative two decades ago, barely even interesting anymore now. Which I’m pretty sure somehow makes Peter Forsberg the NHL’s Zack Morris.

Players spend 65 minutes trying to get open enough to take a slap shot. Then they get a turn in the shootout, with nobody around them, and they almost never go for the full windup. Why not? Even if the goalie gets in front of it, there’s a decent chance it’s going right through him.

IX: Thou Shalt Try Not to Get a Hot Dog Whipped at You During Your Attempt

OK, granted this one might be a little bit out of your control. But if at all possible, don’t have any food thrown at you and/or the goaltender, since as we learned Tuesday night that means you end up having to shoot twice.

Apparently Tyler Seguin is just destined to go through life surrounded by filth and garbage at all times.

X: If Thou Art a Lumbering Defenseman and Thou Endeth the Longest Shootout in History With a Ridiculous Between-the-Legs Deke, Thou Shalt React Like You Do This All the Time

Here’s a rule of thumb: Anytime something happens in a sporting event that causes both announcers to describe the action by just screaming “AHHHHH!” for several seconds, and neither of them are Gus Johnson, something cool just went down.

That right there is the greatest moment in NHL shootout history. And it will hold that title until the day somebody who enjoys actual hockey finally comes along and cancels the shootout entirely.