We have cast down the barman poet and the super-spy, discarded the sleazy studio exec and the real live man himself in all forms. It is down to Maguire, and it is down to Maverick, the most pristine form of Tom Cruise ever displayed to human eyes. The Fiji Water of Tom Cruise. The prototype from before Tom Cruise was Tom Cruise. Goodness gracious, great balls of fire.

“Top Gun is a perfect movie of its kind” is the premise this argument is built on, and if you can’t see your way to agreeing with that, you can probably stop reading and continue living your life incorrectly somewhere else. I shouldn’t have to talk you into this. It’s a beach movie masquerading as a military confection, all painstakingly applied tanning oil and haircuts that should appear in the most advanced textbooks of architecture. And all revolving around a pre-Cruise-as-construct Cruise, a being not yet touched by time, ravaged by fame, or visibly warped by his thrift-store-paperback church.

It seems mildly unreal now that Top Gun was released in 1986. Cruise was a known quantity at that point, but Rain Man, Born on the Fourth of July, and A Few Good Men were all still years away. His Action Star Happening in Mission: Impossible was still a decade out. If you consider Tom Cruise as an American Beauty rose — and if you look around the site this week, you certainly know where we stand on this — Top Gun is his blossoming, before any of the baggage of what being Tom Cruise was going to mean had come to rest on his wee shoulders.

Cruise today can seem … distorted, somehow? Like a copy of a copy of a copy that has lost some fragments, some chips essential to projecting humanity, along the way? But in Top Gun, a time capsule of a movie that seems to exist outside of time as we know it, his emotions play out on his face like it’s a projector screen. The maniacal matrix of control he’s constructed for himself in the years since, if it has even germinated yet, is invisible here. Maverick is living his feelings right the hell out loud. And because I never really think of Tom Cruise as a character, never so much think of Maverick as a discrete entity so much as “Tom Cruise flying planes” or Maguire as “Tom Cruise sweating into a speakerphone,” when I see Pete Mitchell smirking Charlie’s breath away, or mourning Goose, or staring down Iceman, my brain just jumps automatically to this 1:1 correlation: Tom Cruise is in love. Tom Cruise is sad. Tom Cruise is mad, but kinda turned on. Tom Cruise is trust-falling, arms outstretched, into the arms and hearts of America here.

Cruise is still a movie star. His body, it appears from the incessant plane-clinging he does in the MI:5 trailers, can still cash every check his ego writes. And it’s not like he was ever Just Folks, not ever. But can you remember the last time you saw him express a human emotion that you found fully believable? No matter. That’s what Top Gun is for. It’s Tom Cruise Tiger Balm. We can return to it again and again without the fear of it ever growing stale. It is a bottomless spring of Cruisitude, an endlessly renewable resource of boys and the playing therewith.

Nowhere is this certitude more stable than in the eternal volleyball scene. This sliver of film history has circumnavigated the globe from YEAH BOYS to Y’ALL KISS NOW to UGH CHEESEBALL, crossed some international dateline of appeal, and sneaked back up on us from behind with the sincere realization that within this scene is everything there is to want in life: some sand, some friends, some ball, and jeans that miraculously don’t chafe. The pattern is full, all right. As full as our hearts. 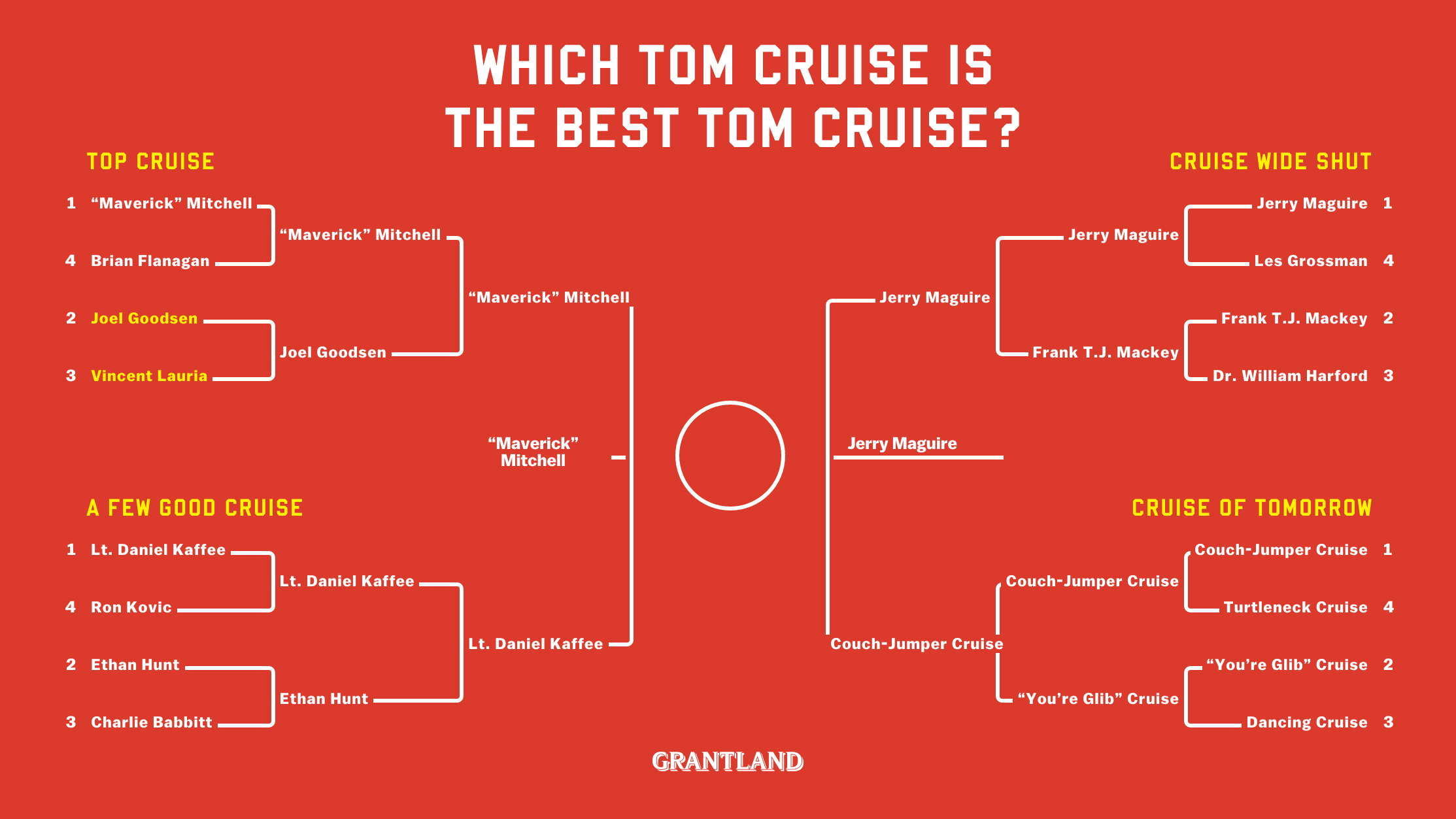