The Full Measure: ‘Better Call Saul,’ the Origins of Mike Ehrmantraut, and a Side Man’s Shine 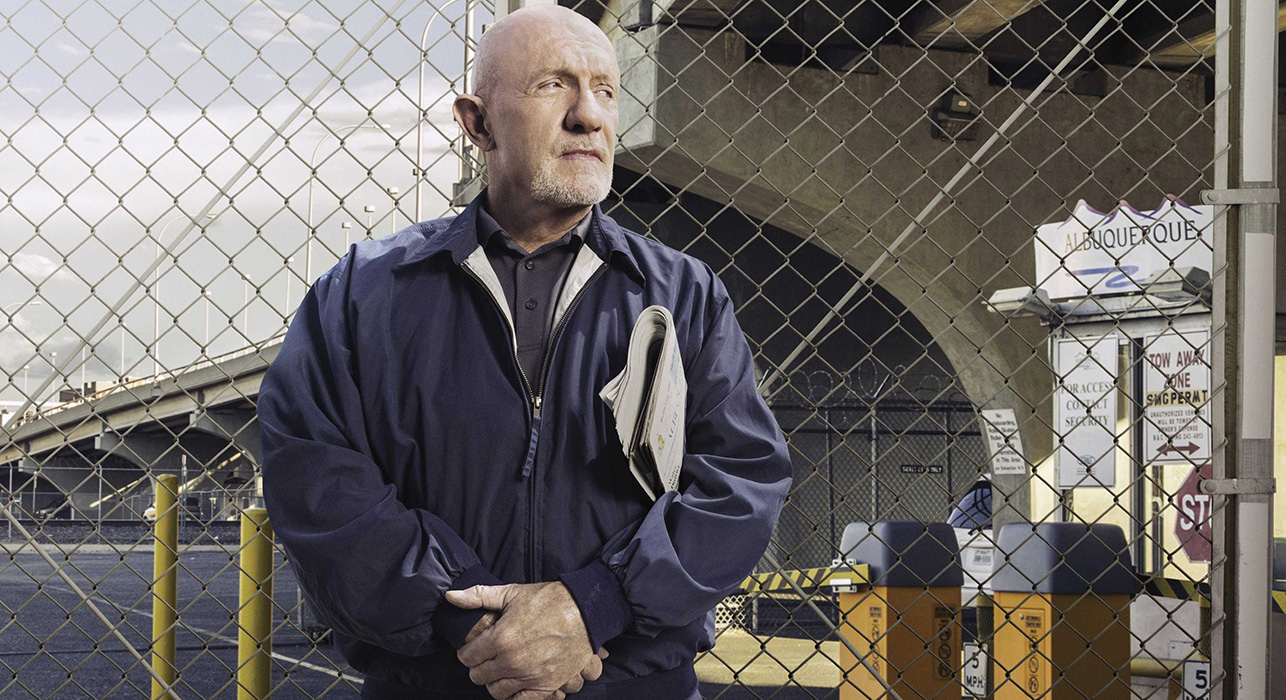 Television has a way of finding its Mike Ehrmantrauts. The snub-nosed, crinkled-headed, frog-throated unprettys who populate shows, out of the spotlight but essential to the credits. They’re utility players and side men, cogs and kickstands, propping up the story, propelling plot forward with short time and little glamour. Your Omars and Ben Linuses, Dowager Countesses and Boyd Crowders. Last night, another side man stepped up.

It was fitting, in a way. Mike Ehrmantraut — truly support for the supporting — only exists because of Bob Odenkirk. Way back in Season 2 of Breaking Bad, creator Vince Gilligan imagined that lawyer-to-the-crooks Saul Goodman would act as the cleanup man for Jane Margolis’s corpse, after her Walter White–assisted death by asphyxiation. But Odenkirk was unavailable to travel to Albuquerque, as Gilligan tells it, and so the showrunner had to conjure a new figure — a “cleaner” — from whole cloth. Up sprung Jonathan Banks, he of the frog throat and crinkled head.

Gilligan remembered Banks from his stint on four seasons of Wiseguy, the long-forgotten but much-loved CBS crime drama created by Stephen J. Cannell. Banks played Detective Frank McPike, a groaning, howling commanding officer to the show’s lead, a deep cover operative working inside the mob. Gilligan loved Wiseguy — his favorite show in college — and loved Banks in it. Who wouldn’t? With that curlicued dome and broken-clock stare, Banks was at his most graceful, dispensing bile and sideways sarcasm amid cops and thugs. Banks has been playing as or against that sort for more than 40 years, with 150 credits to his name and dozens of episodes of series television etched into the decaying ginger root where his nose should be. He was a ham in Airplane! and a goon in Beverly Hills Cop. He was a heavy in Under Siege 2: Dark Territory, Crocodile Dundee in Los Angeles, and Freejack. No wonder — there is something inherently grim but mordantly hilarious about Banks. He has uttered dialogue good and bad, overwrought and underwritten. It never matters; he makes it all work. He isn’t just a That Guy, he’s a Forever Guy.

Ehrmantraut met a majestic end in the final season of Breaking Bad, far more poetic than any of his slaughtered peers — he expired beside a stream, slumping down in the Magic Hour. Only that wasn’t the end of Mike, who was resurrected in the shadow of the underworld that Better Call Saul has been rebuilding, inch by slime-covered inch, in its first season on AMC.

“I think the dark path that Mike has taken has to do with whatever happened to his son,” Banks, who is 68, told Rolling Stone during the fifth season of Breaking Bad. “Now that’s just an actor’s opinion. The audience probably will never find out. But I think that’s one of the things that happened to him.”

On the sixth episode of Saul, titled “Five-O,” we did find out, and Banks’s theory was verified. We see flashes of Mike’s old life in Philadelphia, as a sloshing-drunk cop mourning the death of his fellow-cop son. “Five-O” shifts back and forth in time — from the present day1 to the investigation of the deaths of two police officers who worked closely with his murdered son, and back to their eventual murders, at Mike’s hands. It’s an actor’s showcase, pulling the attention almost completely away from Odenkirk — who has been brilliant on the often superb Saul all season — and onto Mike, a fan favorite, though often “taciturn,” as Odenkirk’s Jimmy McGill gleefully describes him at one point. Mike does a lot of talking here, mostly to the actress Kerry Condon of Rome and Luck fame. Condon plays his daughter-in-law and the mother of his granddaughter, whom we first met on Breaking Bad — she is essentially the figure for whom Mike does all of those terrible things for Gus Fring and later Walter White. The episode ultimately culminates in a wrenching soliloquy from Mike, delivering the truth about what happened to his son — who refused to take money on the job — and why.

“I broke my boy,” Banks says, his eyes welling. “I was the only one who could get him to debase himself like that, and it was for nothing. I made him like me. And the bastards killed him anyway.”

It was the most devastating, guttural moment in a career often marked by raised eyebrows and grumbled remarks — like someone got the VCR to stop flashing 12:00 and instead project 3-D Blu-rays onto the wall. Mike’s speech recalled “Half Measures,” the 12th episode of the third season of Breaking Bad. That episode — directed by Adam Bernstein, the man who helmed last night’s “Five-O” — ended with a similarly hard-nosed and chilling story about a broken family and the cost of not going all the way. For many, “Half Measures” was the announcement of Mike as an essential part of the Breaking Bad story — a leaping out from the sideline into the scrum. “Five-O” was a logical bookend, a breaking bad all its own. Mike Ehrmantraut is dead, long live Mike Ehrmantraut.