J.G. Ballard — who knew a thing or two about speed, wastelands, the human death drive, and the mortification of flesh by flying auto parts — once described 1981’s The Road Warrior, the second of George Miller’s Mad Max movies, as “punk’s Sistine Chapel.” Ballard was not as big a fan of 1985’s Mad Max Beyond Thunderdome. But even Michelangelo wasn’t immune to the impulse to sequelize, returning to the Apostolic Palace after nearly 25 years (and the Sack of Rome) to paint The Last Judgment above the chapel’s altar. It features a buff, wrathful Jesus, tons of un-fig-leafed full-frontal nudity, chaotic composition that rejected all notions of universal hierarchy, two-fisted angels clobbering wretched sinners, demons dragging the condemned down into hellfire, a likeness of one of Michelangelo’s critics with a snake’s jaws clamped on his nuts, and a cameo by the artist himself as a face on some flayed skin. The lesson here: If you have to come back, it’s best to come back hard-core.

We live in times of lowered expectation, blockbuster-wise; we pretend that not-insulting relaunches of old IP are worthy and that the rare worthy ones are also interesting and necessary. We’re lying to ourselves, but we do it because there’s almost nothing else out there. Fifteen years in the making and right on time, Mad Max: Fury Road is something else. A respectful and respectable update of the Mad Max mythos would probably still have been received as a much-needed corrective to the unbearable lightness of superhero movies, the way even perfectly OK Fast & Furious sequels usually are. Instead, Miller (who cowrote the script with Brendan McCarthy and Nick Lathouris) spends two nitro-boosted hours gleefully one-upping and two-upping and 10-upping the iconic mayhem of the previous Mad Max films — and uses all of that hyperkinetic spectacle to deliver a surprising moral payload. When I finally got the chance to take a breath and a few notes after the first big demolition-derby set piece — this movie doesn’t slow down, it only relents — I thought of the cartoonist James Kochalka saying Frank Miller’s late-career masterpiece Batman: The Dark Knight Strikes Again read like the work “of a teenager who knows in his heart that he’s BETTER than Frank Miller, and he’s ready to take the world by storm.” But let’s leave superheroes out of this, at least for a minute. I walked out of this movie feeling the way I imagine poet Filippo Tommaso Marinetti1 did when he flipped his Fiat into a ditch in 1908 and emerged with the idea for “The Futurist Manifesto”: “When I came up — torn, filthy, and stinking — from under the capsized car, I felt the white-hot iron of joy deliciously pass through my heart!”

After the briefest of prologues — society’s death throes as montage of heck, complete with what sounds like Ronald Reagan muttering, “Mankind has gone rogue” — we rejoin the fallen world already in progress. The former Max Rockatansky has grown an Old Testament beard and fled to the desert to be alone with his Thunderdome flashbacks and live on two-headed-lizard meat — until he’s literally pulled back into action by a gang of War Boys, paint-huffing, chalk-skinned automotive death-cultist mutants who take Max hostage and begin siphoning his “high-octane crazy blood” into their own sickly veins. Due to Mel Gibson’s age/schedule/lingering radioactivity, Max is played this time by Tom Hardy, who lacks his predecessor’s aura of inexpressible guilt and grief, but does nail the deadness of Gibson’s pan. Fans of the diverse and unique native accents of Tomhardia will be pleased to learn that Hardy’s interpretation of Australian involves grumbling like a lion who’s had James Mason for breakfast and Vin Diesel for lunch. His Steve McQueenish Max is laconic and tough, but not particularly vivid, which might have been an issue if the movie hadn’t provided him with a compelling coprotagonist in Imperator Furiosa, a hardened and haunted bionic-woman road warrior, played by Charlize Theron with grief and guilt to spare. Miller has lately been fond of quoting Hitchcock’s desire to make films so visual the Japanese could enjoy them without reading the subtitles; there’s enough going on in Theron’s raccoon eyes that even sound feels superfluous. 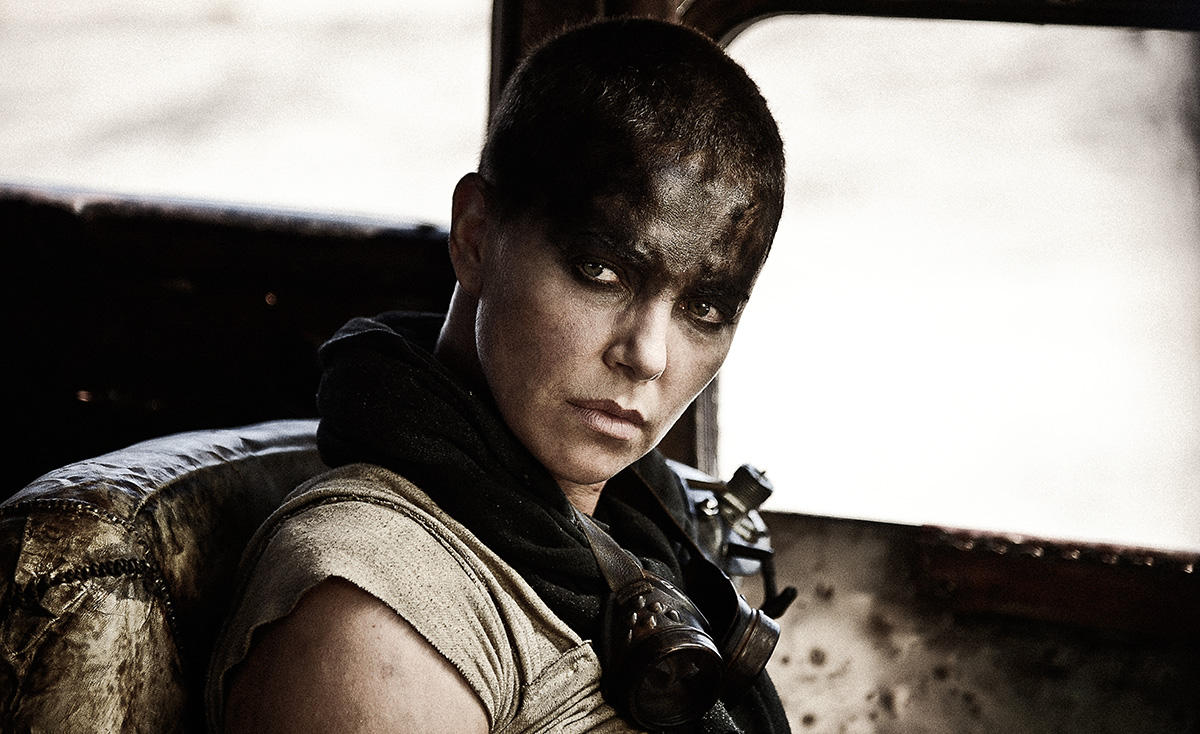 Furiosa drives a huge and hilariously phallic “war rig” for Immortan Joe, the fiendish albino baron of a water-starved desert city that suggests Frank Herbert’s Dune as reimagined by Buckethead. (The actor under Joe’s sinister respirator is Hugh Keays-Byrne, who made Max a widower as the biker-gang leader Toecutter in the 1979 original.) When she makes off with the rig during a supply run and heads for the hills, Joe and his War Boys follow — because Furiosa has also liberated five young women from Joe’s harem of “wives,” including the pregnant Splendid (Rosie Huntington-Whiteley). Miller finds a clever, Road Warrior–inspired way to insert Max into the ensuing chase scene, which is every bit as bananas as you’ve heard — teenage kamikazes driving the armored jalopies of Ed Roth’s fever dreams, porcupine death-buggies straight out of The Cars That Ate Paris, and a fiery sandstorm that shows up in the background of one shot like a photobombing extra before filling up the screen in the next like the pissed-off face of God. Edited with neck-snap precision by Margaret Sixel, this whole sequence is breathtaking; I was sure it was the year’s best action scene until I saw the one in the third act, which is a Raiders of the Lost Ark–grade master class in escalating complication. (Two words: Pole Boys. Trust me on this.)

A movie that simply did these things this well would have felt like a gift. But Fury Road aims to justify its existence by other means. The key moment comes in the calm after the storm. Max drags himself across the desert, still connected by a length of chain and a blood-transfusion tube to an unconscious War Boy and his car door. He spots the wives, bathing in radiator water like nymphs at a pond while taking bolt cutters to their chastity belts. Half-wrapped in diaphanous linen, they resemble America’s Next Top Model competitors who’ve somehow escaped Tyra’s clutches before the makeover episode. You can read the movie’s politics loud and clear in the fight scene that follows, in which Max’s literal blood tie to a foot soldier of the phallocracy becomes both action beat and telling metaphor. Miller came close to shooting a Gibson-led version of Fury Road back in 2001 before 9/11 and the fall of the dollar torpedoed his budget; presumably, he can’t have anticipated Gamergate making representational parity and misogyny into third-rail issues within the core audience for postapocalyptic action movies any more than he saw Boko Haram coming. But the “men’s rights” crusaders now gnawing their fedora brims in righteous apoplexy over the thought of Mad Max’s manly iconography being perverted to serve a misandrist agenda aren’t actually imagining things. This is an unambiguously and unapologetically feminist, Bechdel test–passing sci-fi blockbuster that begins, I’ll say again, with Charlize Theron commandeering an 18-wheeled battle-dong in order to free some sex slaves and ends by explicitly linking the liberation of humanity in general to the dismantling (and, in some cases, dismemberment) of the patriarchy. It asks, “Who killed the world?” and doesn’t front like there’s more than one answer. Its most romantic moment involves a woman using a man to steady her rifle. I only wish Miller had given each of the five wives story beats as amazing as their names; the mere fact that Zoe Kravitz’s character is a person called “Toast the Knowing” is the first thing in the entire history of movies that’s made me want to read a prequel in graphic-novel form. 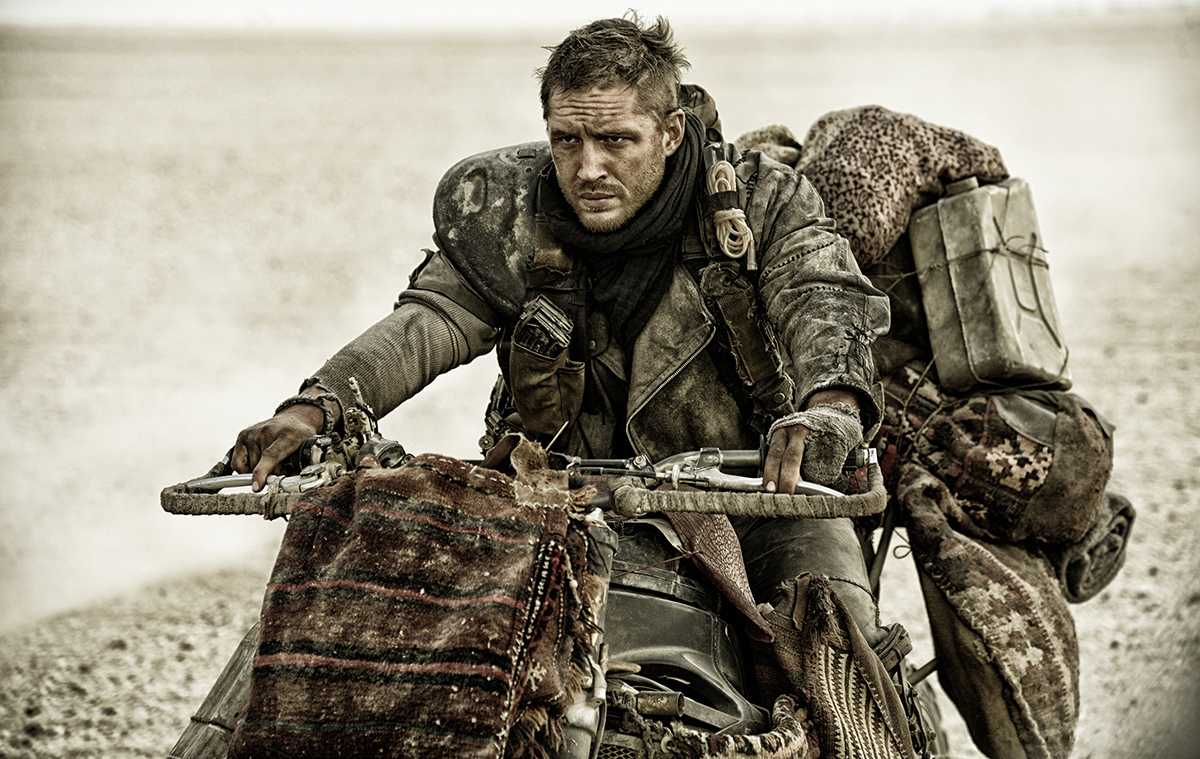 It’s worth pointing out that this series has never just been about vehicular manslaughter in a world driven mad by its thirst for gazz-o-lean or, in Fury Road’s case, water. All four movies absolutely belong in the Postapocalyptic Dude-Competence Fantasy section of the video store. But right below that admittedly very skateable surface, they’re about a broken man who tries over and over to turn his back on what’s left of the world and instead keeps finding himself responsible to and for other people — a loner who’s never alone. Each of the four Max movies is a study of one of the major food groups of human interconnectedness. Mad Max is about husbands and wives. The Road Warrior is basically a Western, so it’s about individuals and communities. Thunderdome is about parents and children. And Fury Road is about women and men — about objectification and exploitation, the self-loathing at the root of misogyny, and the question of whether these patterns can ever be broken. “Where must we go,” a closing epigram asks, “we who wander this wasteland in search of our better selves?” And maybe I’m imagining some of this — but I didn’t imagine the part when Max literally washes away blood with mother’s milk.

And if that’s not enough for you — or if it’s way too much — Fury Road is also one of the best action movies of the decade, a punk Last Judgment with manic invention and depraved wit on display in every frame: Immortan Joe’s Frankensteined Coupe de Ville. Joe’s idiot son Rictus, who’s essentially a Mad magazine caricature of the Rock. The door gunner who pops up periodically in the window of Furiosa’s war rig to bark inquiries like a short-order cook sticking his head out of a diner kitchen. The skull-faced Eddie the Head dude — “The Doof Warrior,” per IMDb — riding into battle suspended in front of a truckload of amps while wrestling malevolent riffage from a double-necked ax with attached flamethrower. Furiosa will end up being this movie’s lasting contribution to the canon and to cosplay. But the Doof Warrior? That guy is this movie’s soul.