“It can always be worse.”

These are the words of The Artist Formerly Known as Theon Greyjoy as told to Sansa. The context was her daily imprisonment and nightly sexual assaults at the hands of her new husband, Ramsay Bolton. It was logical advice from Reek, who knows how quickly Ramsay’s knife can go from gentle skimming to full-fledged chopping — and, indeed, it proved to be prophetic. Instead of watching a light go on in the high tower, we got to see one snuffed out behind Sansa’s eyes when Theon’s latest betrayal was revealed. But I can’t say it was particularly interesting, so much as another opportunity to repeat Game of Thrones 101: Behind every kind smile is a cruel rictus of blood and muscle; behind every open window is a long and perilous fall. Yes, I understand that to expect a different result means one hasn’t “been paying attention.” But, look, I have been paying attention. Honestly, I have! Don’t I deserve some kind of small reward?

I’m sorry if I sound cranky, but not even an econo-goblet of Cersei’s finest claret can wash the taste of last week’s episode out of my mouth. And it’s not even solely to do with the continued struggles of Sansa. (Although I must say, if there’s anyone out there still buying producer Bryan Cogman’s line about how Sansa is somehow “a hardened woman making a choice,” I have some oceanfront property in the Red Waste to sell you.) It’s this grinding sense that Theon’s words aren’t just a warning, they’re standard operating procedure; that in any situation in Westeros, the worst case isn’t a threat, it’s a guarantee. The lack of sentimentality that I once heralded for making the show truly unpredictable might now be the most unpleasantly predictable thing about it.

It shouldn’t have to be this way. When Game of Thrones is at its best, it uses its strongest characters to chisel away at thousands of years of invented hierarchy, bureaucracy, and violence. Think of Arya giving up her name or Tyrion doing his best to redeem his. It’s no coincidence that the best part of “The Gift” was the opening with Jon Snow. It’s not just that the young Lord Commander has, in Ramsay’s words, “done very well for himself.” It’s about the way he’s done it: by smashing through orthodoxy and expectation like a fist through ice. The peace he’s attempting with Tormund is refreshing for a war-weary audience, but more than that, it’s a chance to witness something that has (apparently) never even been attempted in the many millennia so lovingly catalogued in George R.R. Martin’s voluminous books. I understand why Ser Alliser stays sneering, but shouldn’t everyone else at the Wall be applauding this forward-thinking, hopeful audacity? Isn’t it long overdue? And are we entirely sure that Maester Aemon, after snoozing through 11 line-toeing Lord Commanders, didn’t die of boredom?

Because at its worst — and particularly in droopy midseason lulls like the one in which we’re currently mired — Thrones carefully constructs a false binary and presents it to us like gospel. “All rulers are either butchers or meat,” as Daario purrs between the sheets. So, on cue, Thrones pivots from last week’s awful rape scene to an equally ugly scene in which … someone isn’t raped. Though just barely. (These direwolves are starting to remind me of the Spanish Inquisition.) So, hooray for Gilly, I guess? And now the idea that Stannis will sacrifice the daughter he was kvelling over just a few weeks ago hangs over our necks like the long blade of Ser Ilyn Payne. I have no knowledge as to where this particular plotline is going. Perhaps we’re headed to a true moment of humanity in which Stannis forgoes his magical mojo and enters battle high on love and decency.1 But we’ve certainly been conditioned to expect the opposite, that Stannis will go ahead and do a truly terrible specific thing in the hopes it will lead to some vague, general good. This is undoubtedly a tough choice, but let’s not flatter ourselves into thinking that it’s compelling or even particularly original. Using extremes of life and death like bookends shouldn’t be mistaken for complexity. Complexity only happens in the messy expanse between the two.

Or maybe he’s hung on one of those big Bolton X’s, like Wolverine back in the outback days. So much to look forward to!

What’s frustrating to me isn’t the threat of savagery or even the graphic illustration of it. (If I can stomach a Hall of Fame drama ending with a soda commercial, I can handle a little light disemboweling.) The problem is that the longer Game of Thrones has run, the more I find myself seduced by the outrageous imagination on display: the epic sweep of the fictional cartography, the absurd intricacies of tax law and grain supply, the small flourishes of everyday life that dot the margins of every scene like stone men in the ruins of Old Valyria. To inhabit a universe so richly sculpted, so teeming with stories and then be constantly railroaded into familiar brutality is disheartening to say the least. There’s a whole world out there for the exploring, and we keep finding ourselves staring at the same abattoir walls. 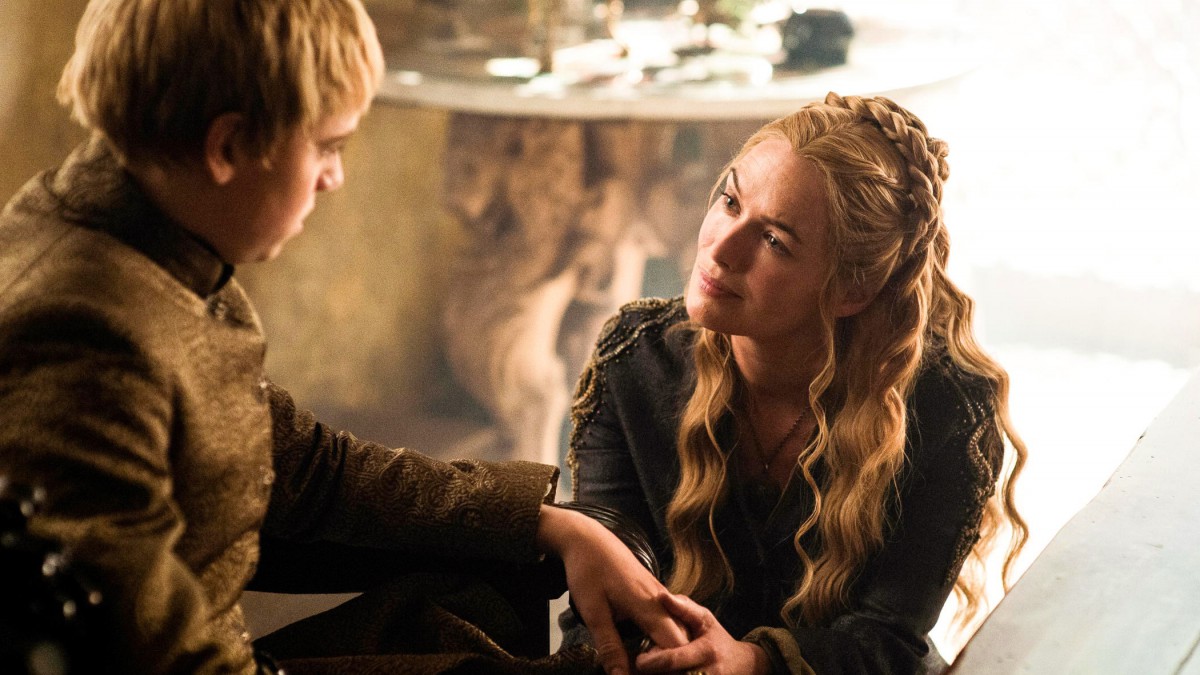 To be fair, “The Gift” was a far better episode than last week’s effort. And for all of its cruelty, it was unquestionably beautiful. Director Miguel Sapochnik, best known for storyboarding Trainspotting (and kind of known for directing a Jude Law movie called Repo Men), brought a mournful solemnity to key scenes: the slight but insistent dusting of snow at Castle Black, the refracted light illuminating the distance between the High Sparrow and the Queen of Thorns. Credit also continues to go to the stars for elevating even the series’ lowest moments. Cersei’s self-orchestrated downfall has been agonizingly obvious to observe, but if her character is trapped on an express elevator to hell, Lena Headey hasn’t gotten the memo — or perhaps she just tore it up. The riot of emotions on her face when Tommen confesses his love for Margaery was wilder than anything that’s ever bubbled up in Flea Bottom. First came the trademark smirk, a piece of Lannister armor as vital as chain mail. But behind her eyes flickered something more dangerous and real: the emotional panic of someone whose most convincing lie has been to herself. Cersei knows what she’s done as surely as she knows she’s powerless to stop the results. When she tells Tommen he can never understand the depth of her love for him, she’s right. Only the truest and purest love can ignite the sort of fire capable of burning everyone and everything it touches.

I don’t expect things to end well for Cersei over the next three episodes; her list of heretical sins is longer than Lancel’s hair used to be. (Actually, my Cersei pessimism dates back to the very beginning of the season, with its death-clears-its-throat flashback.) And, frankly, why should it? But should the situation go sideways, I’ll mourn for Headey’s performance more than the character. She’s made something that could have been one-note ring out like a symphony. (Or, in terms Cersei would appreciate, she’s taken a single grape and squeezed it into a Jeroboam.) So rich and perversely sympathetic is Headey that I found her touchdown celebration in Margaery’s cell unnecessary. Don’t make someone eat venison when they’re already choking on crow! But it’s equally unnecessary to make someone a villain when they’ve already accomplished the much more dangerous trick of outing themselves as human.

Maybe I should practice what I preach, then, and look at what worked with optimism. Diana Rigg and Jonathan Pryce, with their tart two-step, brought back a little of that much-missed Charles Dance magic. The idea of fantasy hoi polloi rising up en masse is fascinating — too often they’re reduced to dragon kibble or merely tossed onto death wagons — but I wish the most prominent avatars of the forgotten classes weren’t anti-buggery religious fanatics and turquoise-clad slave traders. (I’ve said it before and I’ll say it again: Meereen is the worst. And Daenerys really ought to know better than to wear white to a bloodbath. Do you know how hard it is to bleach out arterial spray?) And I still love Bronn, absolutely and without reservation. It was just a shame to see his charm stashed in a dungeon and yoked to … whatever that was with the flirty Sand Snake. Autoerotic incarceration? Magical antidotes in necklaces? Do they have mulligans in the Seven Kingdoms, and could we possibly take one on all of Dorne?

But here I go again. The truth is there’s much to look forward to in the remaining hours of Season 5. I expect Winterfell to get a righteous sacking, and I love a good Jon Snow road trip. And, at long last, Daenerys has found a fire-breather she can’t lock in the basement. Tyrion has been away from power for so long that we forget how masterful he is at wielding it and (especially) advising those with more of it. After seeing the jokers Daenerys has surrounded herself with thus far, it’s a wonder she’s able to hold on to her hat, let alone three teetering megalopolises. Pairing the Mother of Dragons with the Killer of His Father is as exciting as it is overdue. The truth is, Game of Thrones desperately needs Daenerys to be a robust protagonist, not an antiwar metaphor. Unlike the other pretenders, her claim on the throne isn’t based on spite or prophecy. She carries with her a radical agenda of hope and change, and, if people aren’t buying that, she’s got dragons.

Daenerys doesn’t want to win the world as much as she wants to remake it. And as the story craters and dead-ends all around her, it’s time for just this sort of radicalism to take flight.