Checking in now, just more than four years since the Lost finale aired to a swirling storm of long knives, we find that neither of our principal players has sullenly and silently retreated into a money-padded underground bunker of insular goodwill. In fact — with, respectively, HBO’s The Leftovers, which aired its third episode this weekend, and FX’s The Strain, which premiered Sunday night — we find both Damon Lindelof and Carlton Cuse having sacked up and anted up again. Why, there they are, on your TV, creating elaborate alternate-reality sci-fi landscapes brimming with in-house mythologies! And so now, the impolitic question must be asked: Which half of the erstwhile Darlton is, you know, winning? Let’s break it down!

I say “impolitic” because this was never a creative partnership in the traditional way we understand the term. Generally speaking:

And all the while, we practice some kind of bastard Kremlinology, hoping to suss out exactly how credit for the glories and shame for the defeats should be portioned out.

But Carlton-Damon had its own strange logic. It started (as has any bit of pop culture since, roughly, Armistice Day 2003) with J.J. Abrams. As the New York Times Magazine explained in its fantastic Lindelof profile from May, Damon was brought in by Abrams on a tip from an ABC development executive who liked the young man’s stuff; the two immediately hit it off, and managed to create the pilot, from scratch, in 13 weeks. Then Abrams got the call from T.C. to come direct Mission: Impossible III.

Said Lindelof, of that time, “I’m 30 years old. This is a juggernaut that we’re shooting in Hawaii — there’s no way J.J. is just going to just leave me holding this baby. I’m completely and totally unqualified as a parent.” Which, of course, is exactly what happened. Panicked, Lindelof rang up his old boss, Carlton Cuse, who’d given him one of his first jobs, on, of all things, Nash Bridges. And so, immediately, things got screwy: The de facto mentor — Cuse is 14 years older than Lindelof — had become a partner, one brought in late to the expedition, but one brought in to stabilize the ship. And, certainly, it was stabilized. “When I got the call the next morning as to what the ratings were [after the pilot aired], I literally cried,” Lindelof told the Times. “Not with joy, but sort of like, this is too much.” Adds Cuse, “I remember Damon walking into my office and saying: ‘Oh, my God. Does that mean we have to keep making this?’”

Do You Belieeeeve in Life After Lost? Part 1

This is certainly a bit of hindsight analysis, but since the early days, when the show was an untroubled world-eating behemoth, and the two trotted from Comic-Con to Comic-Con with well-earned grins of triumph, didn’t Lindelof always seem to own Lost a bit more? Maybe it was just the self-aware nerdiness of his look; maybe it was a certain overeagerness that comes with being 30 years old and suddenly huge. Think about it: Cuse was in his mid-forties when Lost hit, a family man with a respectable Hollywood career. No, no one was unpacking the Nash–Joe Dominguez relationship for fleeting allusions to the Declaration of the Rights of Man and of the Citizen, but that show aired for 122 episodes over five years: Seen in any kind of rational terms, it was an unqualified success. Quite possibly, Cuse expected his career to continue apace: a steady string of doubles, respectable and clean. And so when Lost changed everything for him, it wouldn’t necessarily have been a brass ring he’d been chasing all his life, a soaring, late-breaking testament to his dormant genius. It might have just been a nice thing to have.

Which also means that, when it came to Lost, perhaps Cuse couldn’t ever feel feelings the way Lindelof felt feelings. 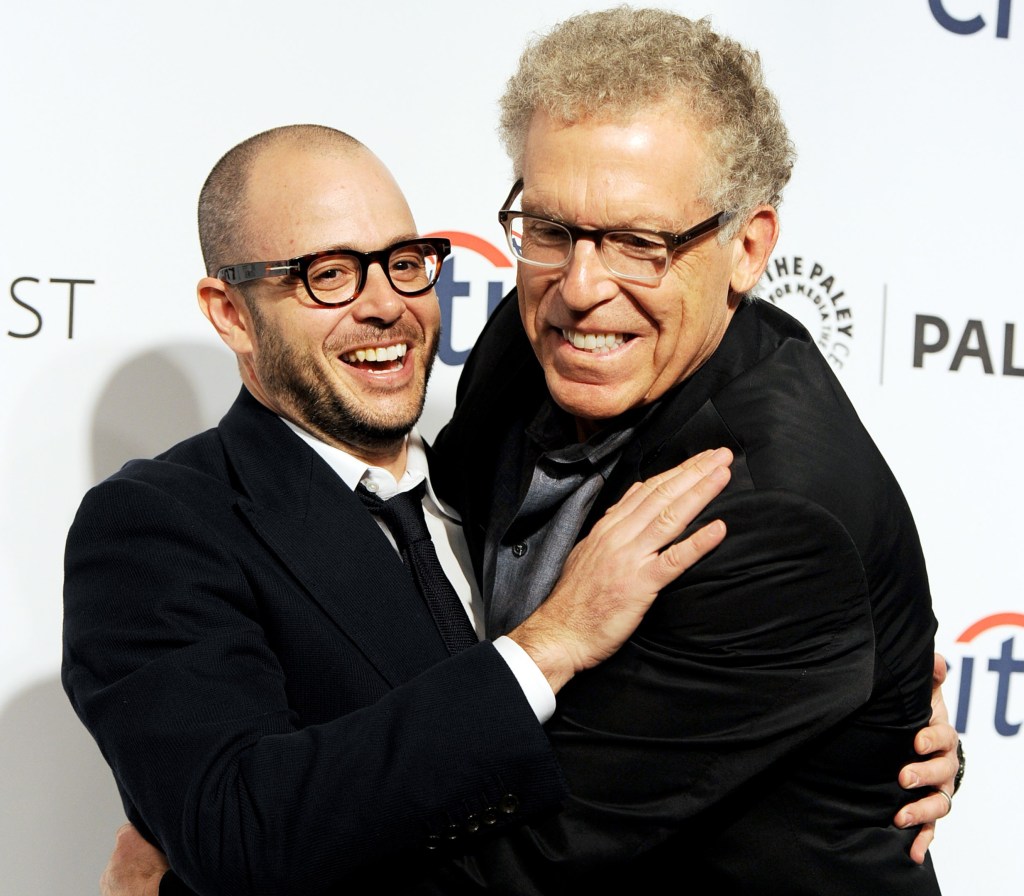 After Lost, Cuse would engage in little of the soul-baring that became Lindelof’s trademark. “Sometimes things don’t land the way you expect them to and you do want to have some sense of audience feedback but it has to be modulated in a way that it doesn’t become destructive to your own creative process,” he told Vulture recently. “Like in a lot of things, a few negative voices can make a lot of noise, and I think there were a lot of people who really did like the ending of the show.” This is a fundamentally uninteresting, fundamentally true way of talking about the situation. It becomes notable only in comparison to our pal Damon, who told the Times, “I do not like the feeling that I experience when people talk about how much Lost sucked. I can no longer acknowledge it. I spent three years acknowledging it. I hear you. I understand. I get it. I’m not in denial about it. That said, I can’t continue to be this persona. I can’t continue to acknowledge you, because acknowledging you invites more of it, and it really hurts my feelings.” One sounds removed — cold, even — but stable; one, boldly, cops to anguish. It’s a simple thing, really: more of the glory, more of the pain.

Also important, from Cuse: “Damon seems like he’s in a really good place.”

Also important, from Cuse’s IMDb page’s “Trivia” section: “Frequently noted (or mocked, by his co-writers) for his resemblance, both in voice and appearance, to Ted Danson.”

Cuse’s first Lost follow-up was Bates Motel, a Psycho prequel existing happily out of the spotlight on A&E. “What intrigued me was doing something that was small and intimate,” he’s explained. “Bates just felt different from Lost in a good way.” There’s also the fact that, as Cuse himself puts it, “there is no big struggle with how to land the end.” If you cared to bash Cuse, which no one really seems to have much vested interest in doing, it’s right there for you: For all his inner peace, he picked a follow-up project for which the end had already been written.

Do You Belieeeeve in Life After Lost? Part 2

Lindelof jetted directly from Frozen Donkey Wheel Island to the upper tiers of Hollywood blockbuster Hessianism, which perhaps would have been his original calling, as a young J.J. Abrams–tutored whiz kid, had the correct confluence of events not conspired to make Lost such a colossus. That meant, technically, that he was giving his heart a rest: Figuring out character motivations for Cowboys & Aliens would never haunt him the same way that charting the departure of poor, doomed Desmond Hume did. But it’s not like Lindelof didn’t grapple in full with the responsibilities of his new gig.

Speaking with New York magazine, Lindelof perfectly broke down the root of blockbuster fatigue: “Once you spend more than $100 million on a movie, you have to save the world. And when you start there, and basically say, I have to construct a MacGuffin based on if they shut off this, or they close this portal, or they deactivate this bomb, or they come up with this cure, it will save the world — you are very limited in terms of how you execute that. And in many ways, you can become a slave to it and, again, I make no excuses, I’m just saying you kind of have to start there. In the old days, it was just as satisfying that all Superman has to do was basically save Lois from this earthquake in California.”

As that piece pointed out, that meant, then, that Lindelof’s greatest triumph in his days of being a writer for hire was scaling back the ending of World War Z: From the originally planned giant battle sequence, we came back down to earth with a stark and nicely suffocating sequence set in a Welsh medical lab. More importantly: Despite any minor claims to as-long-as-the-check-clears vibes, Lindelof would still manage to put himself on the chopping block: He’d swapped out one fan cult (Lostians) for another (Alien-heads), but, with Prometheus alone, the long knives were bared once again. And so if you’re gonna get knocked around anyway, why not get knocked around for something that’s fully yours?

Before quitting Twitter, Lindelof spoke with Grantland’s Alex Pappademas about his and the medium’s unhealthy relationship. “The voices that are the loudest and most hurtful are the ones that stay with you,” he said, “and the ones that are supportive — it’s nice to have people say nice things, but it’s very transient. But the guy who says, ‘You’re a hack and you’re a fraud, and I can see you for what you are,’ you basically go, ‘He knows me.'” And yet — and YET — he came back for more.

Not with Twitter (not at this point, at least) but with The Leftovers — as has been widely pointed out, it’s another show with highly mysterious beginnings that, at least implicitly, promises, at some point, some big, satisfying answers. As he told the Times, “More than anything else, me taking this show says: ‘Yeah, I’ve made my persona into the guy who is clearly emotionally affected by your dislike of Lost, but here we go again.’ I’m getting back on the roller coaster because I can’t help myself.”

Real quick, let’s go back to the beginning. One more reason it doesn’t actually make sense to make Carlton and Damon compete? Neither one is going to be weighed against the other’s latter-day accomplishments: For Lindelof, at least, the legacy of Lost is what will follow him.

With Bates Motel, Cuse has his prefab ending; with The Strain, he has a more famous partner in Guillermo del Toro happily ready to take the brunt of the resistance or reward. Lindelof, though? Lindelof went right back into the scary place. Cuse, it would seem, has an easier relationship with this all: He’s probably happier, probably more stable, maybe even as rich. But Lindelof will go big and live forever — or be mocked forever for going big again and again falling short.

I interviewed Junot Diaz once, and I always remember him coming to grips with his famously slow process: “Motherfucker, I thought this shit was going to be easy. I really thought I’d have 20 books by now! If somebody saw what I do to be a writer, if they opened up my brain [to switch with me], they’d be like, ‘no — give me Michael Chabon.'” Given the option, Lindelof knows, you might pick Cuse’s brain. But what’s he supposed to do? He can’t help himself.