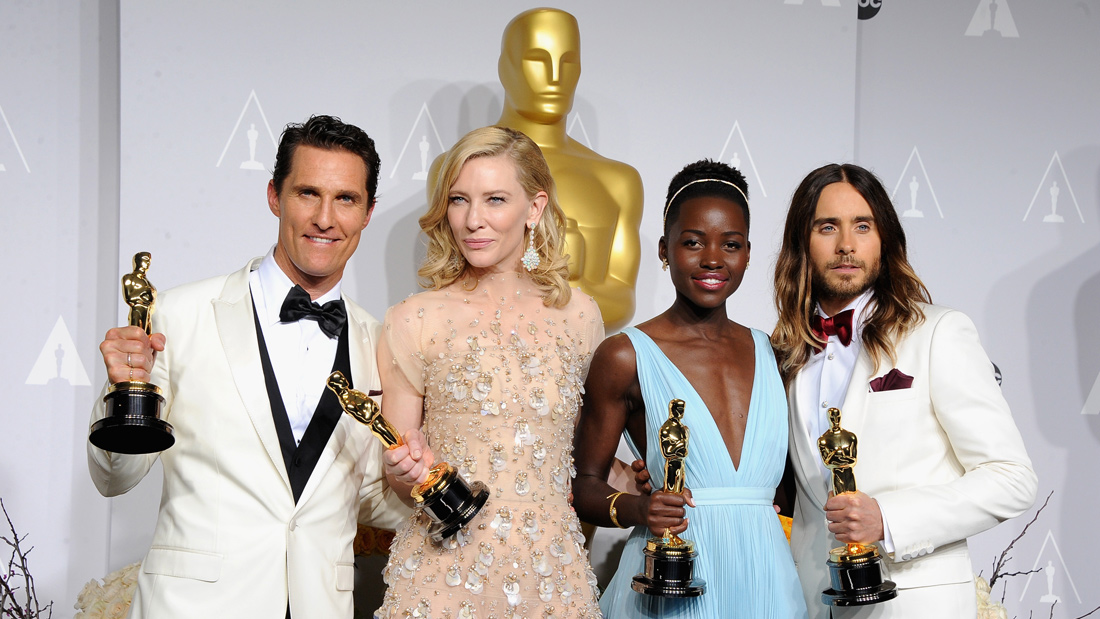 For one frightening moment at the end of last night’s Oscar telecast, I thought the six-month journey of 12 Years a Slave to the finish line was going to end with the perfect visual image of a racial breakthrough: Brad Pitt holding an Academy Award. This is what they were talking about, people: For the love of God, we have been waiting since Thelma & Louise. IT’S TIME. But among the many things Pitt understands very well is how to navigate a charged and tricky moment on camera — on the evidence of the telecast, I’d say maybe he picked up some of that grace from Angelina Jolie — and so, after a few well-chosen words, he ceded the microphone and the moment to the film’s director, Steve McQueen, who ended up as big a winner as a man who had just lost the Best Director Oscar could possibly be. To see a man not remotely given to explosions of exuberance jumping for joy onstage is a finale with which few could argue.

The show itself was a long, slightly low-energy end to a long, slightly bad-energy season. My very quick verdict: Ellen DeGeneres did just fine, film-clip packages illuminating non-ideas like “heroes” are very close to a preemptive admission of defeat, Twitter is now as overused an Oscar punch line as television was in the Bob Hope days, and as always, it’s not the overstaged moments that linger, but the unexpected ones — Bill Murray paying tribute to Harold Ramis, Darlene Love raising the roof, and my DVR suddenly asking “Do you still want to record The Walking Dead?” just as Bette Midler was singing “Wind Beneath My Wings.”

Although I disagree with many of their choices, I think Academy voters, in their fitful way, mostly did their job this year. They acquitted themselves well not by being concerned with making history or making statements but with making category-by-category distinctions about what they liked the best. It would be a giant mistake rooted in a false idea that The Monolith Has Spoken to suggest that the Best Picture win for 12 Years a Slave represents a shattered ceiling, just as its loss would not have represented a snub or a refutation. Change is incremental: The win is connected, in some ways, to progress represented in a show that did not have to bend itself out of shape to include 10 presenters of color, run by an organization headed by an African American woman, with a predominantly white membership whose governors have made a concerted and increasingly successful years-long effort to diversify the ranks. The Academy looking more like the world is progress of a kind that makes further progress possible.

Wins aren’t supposed to be anything but the rewarding of excellence, and they’re actually terrible ways to answer hard questions. Did you feel the emotional surge as the audience stood and cheered Lupita Nyong’o? Did you sense the real warmth for Barkhad Abdi? Did you wonder what Chiwetel Ejiofor is going to do next? Or how the next five years will go for any of these actors? Those are questions that will get answered by a predominantly white male power structure, not by a Sunday-night awards show, and it is worth taking the wins as a charge (just like the marching orders Cate Blanchett gave the industry about women) to pay attention to this stuff the other 364 days of the year and not imagine that any of it is resolved by a statuette or two.

Still, the Oscars are a moment when the symbolic and the real briefly touch, and in that sense, winning matters. After several years in which lighthearted or inspirational or nostalgic movies walked off with the top prize, Academy voters turned to a tough, sad, hard film about our own bad past made by a black Englishman and said, “This was the best of the year.” And that was, in a way, a relief. An ugly narrative was beginning to build, stoked by the film’s partisans and some of its own campaigners, that staid old white voters weren’t watching the movie because it was too much of a downer. They were going to snub it. They were going to Brokeback it. They were going to confirm every cynical suspicion people had.

Well, “they” didn’t. They gave three Oscars, including the big one, to 12 Years a Slave (was it close? We’ll never know, and that’s appropriate), and three more to an uneven movie that pokes and prods at the early years of the AIDS crisis, and another to a fine documentary about how the music industry has treated African American women, and two more to a delightful cartoon musical about the whitest people on earth, and seven to an expression of powerhouse Hollywood-studio wizardry that was actually made by a Mexican director in England. They surprised many (and delighted me) by handing Best Original Screenplay to Spike Jonze for the delicate and beautiful Her, and after bestowing a combined 31 nominations on American Hustle, Captain Phillips, Nebraska, Philomena, and The Wolf of Wall Street, they bestowed a total of zero awards on those movies. That’s two fewer than The Great Gatsby won. In other words, “they” had good taste, bad taste, and everything in between.

And so … sorry. I just remembered that Jared Leto is an Academy Award winner. I need to regroup for a moment.

OK, I’m back. I confess that I have little patience for critics who routinely sneer at the Academy Awards because they represent choices made by people who aren’t critics, or with Oscar analysts who think our job is to bend the Academy to our cranky will. It’s a weird and interesting phenomenon that every year 6,000 individuals consent to participate in this imperfect, fumbling, aspirational ritual. No, it does not detract from the important discussions about movies that important people feel need to be importantly had, unless those important people choose to waste their time whining about the Oscars, which is their own fault. There was actually no shortage of talk this year — furious, seething, how-could-you-like-that, if-you’re-not-with-me-you’re-against-me, only-a-fool-could-fail-to-blahblahblah talk — so much so that the Oscars felt like a way of saying “Enough already.”

Which seems like the perfect way to end this season’s coverage, except that it would omit an essential element of the Academy Awards: self-congratulation! Let’s get to it! I went a very respectable 20-for-24 this year, missing only Best Original Screenplay, Best Production Design, Best Animated Short, and Best Live-Action Short. (I watched all the shorts, and it’s clear by now that when it comes to that genre, if you’re having a life-or-death moment, I am clearly not the guy to whom you should say, “The clock’s ticking! Do I cut the red wire or the blue?!?”) To anyone whose Oscar pool I messed up, profound apologies, and for the rest of you, thanks for playing along this year! You’ve been a pleasure.