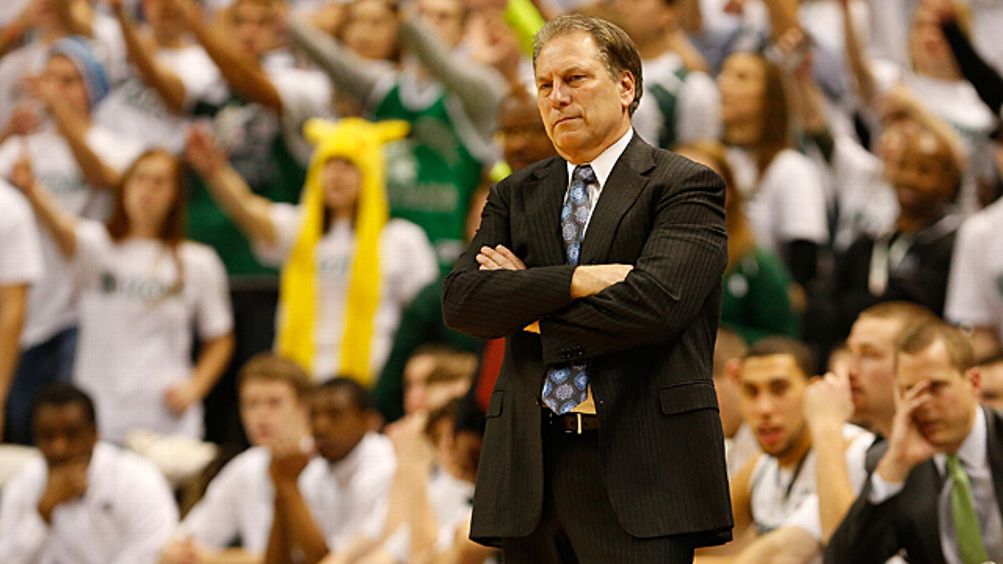 It’s a complicated thing, the sports fan’s relationship with a coach. You don’t simply wake up on the morning of your ninth birthday primed for some solemn-faced geezer to give you life advice via starkly lit flood-insurance commercial. You don’t, the first time you see your basketball idol peel off for some earthshaking dunk, think to yourself, You know what that was about? That was about the guy in the suit and how his 10 keys to leadership apply in a business situation. You need seasoning first. You have to rack up some miles. A kid just wants to fly like LeBron. But one day you get luggage with wheels, and the coach zone claims you too.1

I’ve been thinking a lot about coaches lately, I’m not sure why — probably partly because of the recent explosion in the subprime Harbaugh GIF market and partly because the college basketball season is ramping up again, and with it the annual outbreak of Rick Pitino–passion–sweat reaction shots. No game makes more of its coaches than NCAA basketball, which, on TV, is a cross between a very, very slow version of the NBA and a very, very dumb version of chess. Fifteen thousand cuts to Mike Krzyzewski slouched in his chair, his face electrically dead, his lower lip bulging with thought, conspire to create the impression that the coaches are the real stars here, their brains the real athletes. If only we could see them — and not their flawed, comm-major avatars — operate!

Anyway, I’ve been thinking about coaches, and what I’ve been thinking is that there’s a moment, for many of us, when we stop seeing the game mostly through the eyes of the players and start seeing it mostly through the eyes of the coaches, and that this, while inevitable, is also kind of a shame, and that I at least would have a happier relationship with sports if I cared less about what the guy on the sideline was doing. This moment probably occurs at some point in your 20s, probably around the time you notice that, oh wow, most of the players in the game are younger than you are. That weird mind-flip. It’s not that you stop loving, hating, or marveling over players. It’s that by the time you’re, say, 27, the open-horizon feeling of childhood has started to dwindle. You’re beginning to lose that glimmery deep-down belief that everything is possible. You’re playing sports less seriously than you used to, if you ever played sports seriously. You knew when you were 16 that you were never going to be Michael Jordan — of course you did — but a future in which you had become Michael Jordan was still available to your imagination; it was impossible but not irrelevant. Now it’s both. You hit 30, 35, 40, and the life of a professional athlete seems more and more remote. It’s one of a million pasts that never happened rather than a future you can dream about.

And the experience of the coach is simply much more accessible to almost every grown-up fan than the experience of any high-level player. And not just because so many fans go on to coach their kid’s T-ball team or whatever; think of it as a lifestyle question. The coach doesn’t have to be able to score from an overhead kick or throw a football 80 yards; he has to run meetings, make plans, juggle lists, and justify himself, same as anybody. He does paperwork. Maybe hops on the treadmill when he can. He’s still connected to the magic of sports, but with him it takes the form of inspired halftime speeches and brilliant late-game stratagems — basically work e-mail lifted to a spiritual plane. More than anything, he has to watch a ton of games: obsess about what’s not working, get mad at players who screw up, praise players who do well. When something good happens, he runs around and celebrates. When something bad happens, he flails his arms like an idiot. Sound like anyone you know?

For all the coach’s technical expertise,2 he’s a surrogate for fans because, totally by coincidence, his job involves pantomiming being a fan. Just look at him, in his sloppy shirt, yelling about every trivial injustice he faces, emotionally gone on something pointless, fighting to control what he can’t control. He’s a schlub like the rest of us! Only somehow, he’s also part of the game. 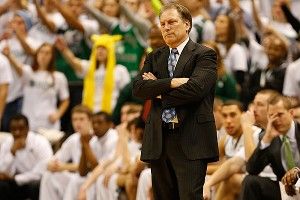 I used to watch more college basketball than I do now. I’m friends with a disproportionate number of hard-core NBA fans, and you know how NBA diehards are about the college game; I was forever having to defend my love of the ACC–Big 10 Challenge from perfectly reasonable, utterly infuriating objections like, “Uhh … you know the level of play is pretty terrible, right?” I would respond to these critiques not by evoking the purity of the NCAA athlete3 or whatever line the revanchist-fundamentals crowd is peddling these days; mostly I would talk about how college basketball foregrounds coaches.

“It’s a different experience,” I would say. “The arenas are tiny, and the best players don’t stick around very long. The coaches are the only faces that repeat from year to year, and you see them a lot. And in the era of fantasy sports and Football Manager, we’re all thinking like coaches anyway;4 we just don’t realize it. So why not have one sport that celebrates team building and, like, prudent squad management? Why not make Tom Izzo yelling his throat raw on the sideline your marquee highlight?

“If the players aren’t that good,” I would add, “doesn’t that underscore the point?”

My favorite sport, soccer, is kind of the same way, in that massive cults of personality form around the top coaches, and they’re on TV a lot, there being many good reasons to cut away from the action of the average soccer game. But the human-reason-defeating popularity of high-level soccer imposes its own distortion field around everything that happens on the pitch — the best soccer coaches are unapproachably deranged and larger than life. College basketball is intimate. John Calipari could be someone in your life.5 Jose Mourinho is a cartoon character; Jay Wright is just overdressed.

So I used to defend college basketball that way — not that it ever persuaded any NBA fans (just the opposite), but it made sense to me. I liked the emphasis on generals over soldiers; I liked seeing the game as a melodrama of static, overpaid, stressed-out adults. To the extent that I thought about it at all, I thought that the bogus commercial mythos of American coaching — I mean the “makers of men, molders of virtue” stuff, the bullshit hardcovers about “the boardroom … and beyond,” John Wooden’s 12 Hexagons of Integrity, the whole corporate-remora existence these guys have in the offseason — was a side effect, a trivial cash-in, not part of the basic reason we identified with coaches. Sports are astonishing; if some junior partner somewhere wants a stocking-stuffer that tells him that astonishment has something to do with his life (“leadership”), who cares?

Lately, though? I’ve been thinking I had that backward. That is, you probably find the coach more appealing as a surrogate the more you need to incorporate your own frustrated work-drone existence into your experience of sports. A 9-year-old just wants to watch superstars hit grand slams, but you turn 35, you drift away from the joy that drew you to the game in the first place, the life of a great athlete turns alien in your imagination … and depending on how you’re built, and how you felt about sports/life/yourself in the first place, there has to be some resentment connected to that, right? I mean, it’s not a mystery that the “hate” side of the grown-up world’s love-hate relationship with pro athletes is alive and glowing. The athletes you grew up idolizing are old practically as soon as you’re an adult; they’re braying their heads off in pregame shows while some kids who’ll never matter as much to you have graduated into the spotlight. The kids are making so much money — too much — and they’ve had everything handed to them, everything’s been too easy. Here’s some idiot with a gun in a nightclub; now talk radio is guitar-soloing all over the word “disgrace.” No respect for the game. In the meantime you bought the house in the good school district and now you’re just trying to make your payments. Sure, you’re still a fan, but how is the runaway success of some 23-year-old millionaire not supposed to wake some pretty deep “Money for Nothing” chords in the VH1 of your heart?

It is dangerously easy, in other words, to sink from “the coach is a fun focal point for my response to the game as a fan” to “the coach is the mechanism through which I can get revenge on the players.” I’m thinking here about how some people loved Bobby Knight who weren’t even Indiana fans, about the English media’s endless half-masted fantasizing about Alex Ferguson giving his players the hair-dryer treatment at halftime. There’s an ugly little thrill in seeing a famous young athlete get his head ripped off, in seeing a star humiliated on TV. And I’m guessing the thrill gets more intense when you identify more with the drill sergeant dispensing the humiliation than with the kid on the receiving end of it. When you consider that most coaches, in just about every sport, are white, and many athletes are not, and think about everything that goes along with that fact in terms of the perceived and actual dynamics of power, none of this gets any prettier.6

So I guess one thing I’m saying is, it may not be that the conference-room nonfiction and Capital One Miles Rhodolite commercials are a simple outgrowth of the popularity of coaches. It may be that they’re also constructing that popularity by emphasizing the similarities between coaches and the frustrated-dad types who most want to see players put in their places. The metaphor works both ways, see? You can have a 36-inch vertical leap, but the middle managers — in their own minds, at least — are still controlling everything.

And the other thing I’m saying is, I realize that sports and fandom are complicated and that part of being a halfway responsible participant in culture means thinking about those complications, trying to understand them, not pretending they don’t exist. But alongside that, or beneath it … God, let me watch sports like a 9-year-old forever.