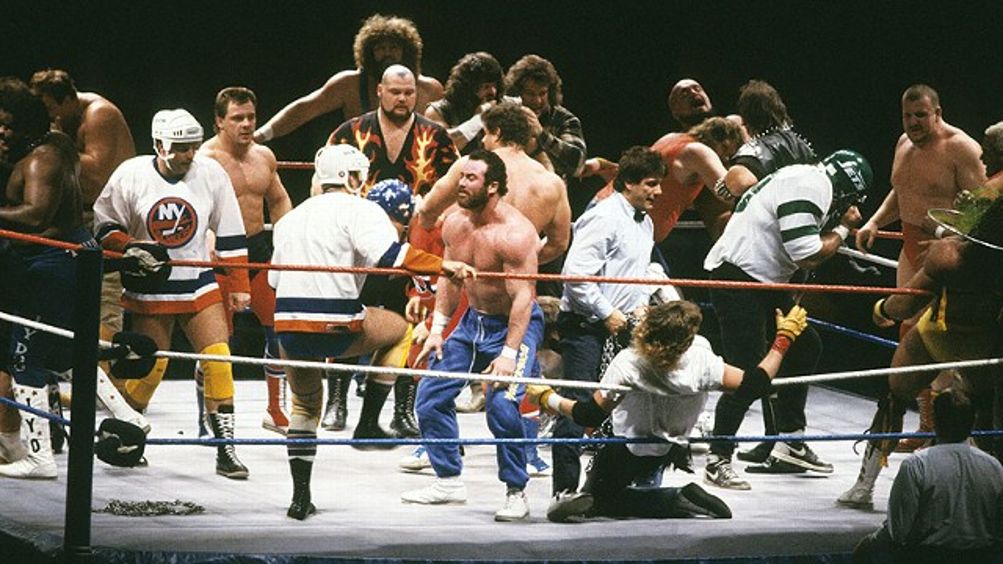 The Royal Rumble is WWE’s annual exercise in controlled chaos. Some unpredictable number of guys in the ring — two, 10, 25 — enacting any number of storylines, interrelated because they’re all in the ring but not necessarily interdependent. It’s a pileup of unconnected grudges — stacked, shuffled, and reshuffled, like a barroom brawl directed by Robert Altman.

This is largely a matter of tradition. In wrestling history, the battle royale has always been a kind of glorified anarchy. Twenty or more men crammed into the ring, brawling in close quarters until all but one have been tossed over the top rope. It’s the sort of spectacle old-time promoters could put on their posters — A Jam-Packed Ring of Fighting Frenzy! A battle royale was something unique, even if it wasn’t something better.

That tradition gave us the Royal Rumble, which debuted in 1988 as the third of four tentpole events (the others being WrestleMania, Survivor Series, and SummerSlam) in the WWF’s pay-per-view schedule. The Royal Rumble‘s innovation on the old ring-full-of-bodies formula was to begin the match with two randomly selected wrestlers, then add another competitor every two minutes,1 until all 302 men3 have made it to the ring. At that point, the wrestlers who haven’t already been dumped fight in standard battle royale fashion to decide the victor. In recent years, the winner of the Rumble has earned a title shot a few months later at WrestleMania.

The Rumble has come to be known for telling career-defining stories — wrestler starts match as one of the first competitors and courageously lasts till the end, or some variation on this theme. It has also become known for its surprise entrants, be they a wrestler returning from injury, a newly signed fighter, or a legend returning to the ring. The Rumble is also an annual high point of fan interaction. The anticipation of each new entrant — contrived though it may be — is often exhilarating, with the audience counting down the seconds to every reveal. Moments like that are rare in wrestling — a near-perfect meeting of the crowd’s pure, almost Pavlovian reaction and WWE machers’ careful manipulation.

The Rumble match was conceived by Pat Patterson, an old-time wrestling star and latter-day Vince McMahon crony who’s renowned for planning high-concept events. (Even the big stars routinely seek Patterson’s advice for choreography on matches that have convoluted or nuanced endings.) With the Rumble, Patterson reimagined the group match for the television era. Rather than impress the crowd with a hulking crush of wrestler mass as they had in the old days, the Rumble format allowed for drawn-out, progressively intricate storytelling4 within the context of in-ring anarchy. Of course, this being the WWF/WWE, the “anarchy” never became too chaotic, and the Rumble only got “out of hand” when WWE planned it.

More than anything else, the Rumble is a tightly scripted melodrama with a chaotic paint job. Much of what happens every year at the event has happened in every past iteration of the Rumble, but the pretence of unpredictability when the two-minute clock counts down is excitement enough. Well, at least that’s how we’re trained to think.

It’s fitting, though, that the Rumble would come now on the calendar, when WWE storytelling seems to be embracing a qualified disarray and surprise for its own sake. The obvious example here is the recent return of Chris Jericho. Jericho, a longtime WWE stalwart (and before that a standout in WCW and ECW and around the world), returned a few weeks ago from a lengthy absence, presaged by a series of creepy (and deliberately misleading, or so it seems) commercials. On his return, Jericho appeared from the darkness in an LED-powered light-up leather jacket, stalked to the ring grinning maniacally, and reveled in cheers from the crowd. After 10 minutes of signalling for whoops from center ring, running circles around the outside of the ring to slap hands with fans, and acting like he was about to speak only to revert to the cheerleader routine, Jericho jogged back up the ramp and listened to more applause. Then, with something approaching a sneer on his face, he just left. The next week, under the pretense that he was coming out to explain himself, he again declined to say anything, this time breaking down in tears while the audience went wild. Last Monday he was booked to host The Highlight Reel, his former in-ring interview show, but once again he pushed his call-and-response act to the verge of mockery (even going so far as to fetch a T-shirt gun, which made the audience perk up even more). When at last he spoke, this is all he said: “At the Royal Rumble, it’s going to be the end of the world as you know it.”

The shtick was nothing short of brilliant. To play with the crowd’s instincts — turning their welcome-back applause against them — was the most effective way for a star like Jericho to “turn heel” in short order. In fact, he was turning heel in perhaps the most meta way possible: Average fans were largely left perplexed by Jericho’s act, but the “smart” fans on the Internet felt most strongly aggrieved. Many of them knew what Jericho was doing, yet they were still disgusted by the inanity of it. When CM Punk went off-script, those fans swooned; when Jericho deliberately undermined the whole edifice, that was a step too far. Punk assaulted the fourth wall over the summer; Jericho went out and found a fifth wall to address. Jericho and Punk are expected to clash, and when that happens “reality” may take the biggest beating.

The most obvious precedent for Jericho’s audience-taunting is Andy Kaufman’s “I’m from Hollywood” routine in the early 1980s, but what Jericho did in those few silent appearances actually has more in common with another Kaufman stunt: reading The Great Gatsby in its entirety to stupefied audiences. It was performance art under the guise of a blunt assault on fans’ expectations, or vice versa. 5

For another example, look at Brodus Clay. Clay was a fearsome, pug-faced blob of a man introduced in 2010 as an updated One Man Gang.6 After rehabbing an injury, Clay’s return had been teased for weeks with footage of Clay that we all remembered and a horror-movie soundtrack. But Clay was continually bumped off the show — whether it was owing to time constraints or it was some kind of WWE meta-prank is unclear — until his non-appearances eventually became a running joke. When he finally did turn up, it was not as the walleyed bruiser we expected, but rather as “The Funkasaurus,” a dancing, track-suit-wearing, loudmouth street hustler with an infectious funk theme song,7 backup dancers, and a penchant for shouting out dated catchphrases between moves. It was borderline magnificent, but, as with Jericho, it seemed as if WWE was embracing shock for its own sake. Were they trolling their own audience?

In a way, CM Punk opened Pandora’s Box when he ushered in the “Reality Era” a few months ago. Now, thanks to the breathing room he created for acts like Jericho’s and Daniel Bryan’s, Punk’s reality shtick looks almost old-fashioned. His feud with Raw GM John Laurinaitis feels more than a little reminiscent of Steve Austin’s long row with WWE chairman Vince McMahon. For the past few months, Laurinaitis has been playing an inspired mishmash of megalomania, ineptitude, and deep-seated insecurity — a wrestling version of Office Space‘s Bill Lumbergh. He mugs for the camera and repeats his too-long official title, Executive Vice President of Talent Relations and Interim General Manager of Raw, with every appearance. He interferes and bumbles into matches in the name of fairness — although “fairness” often comes at Punk’s expense. Two Mondays ago, Laurinaitis confessed his desire to upend Punk, saying that he was fed up with Punk’s disrespect. This past Monday, Punk finally got his hands on Laurinaitis, but only after the erstwhile GM announced that his role was under review by the WWE board. A bit melodramatic, sure, but that’s the WWE way.

Nothing speaks to WWE’s institutional melodrama better than the current rivalry between John Cena and Kane. Kane, the Undertaker’s storyline brother, returned from an absence with a mission to force Cena to embrace his dark side. He insisted that Cena had been stifling his inner hate throughout years of playing the milquetoast fan favorite. It’s a ridiculous story, complete with pyrotechnics and mystical holes in the ring that allow Kane to access hell (or something). There are implausible injuries, like the broken back Cena buddy Zack Ryder suffered at Kane’s hand on Monday.8 The whole thing is borderline unwatchable, but considering everything else on Raw these days, maybe that’s the point. Maybe they’re trying to get under our skins with this storyline, too.

Or maybe, just maybe, WWE is re-exerting control after the Reality Era hijacked its product.

A bit of history regarding the Royal Rumble is in order here. Like the Survivor Series, the Rumble was part tradition and part cutthroat capitalism. The Rumble started as a way to cash in on the Hulk Hogan–Andre the Giant feud. (The first Rumble, where Hogan and Andre had a contract signing, however, was not a pay-per-view.) And also like Survivor Series, the Rumble was scheduled to disrupt attempts by the NWA, a rival federation, to become a viable alternative to the WWF. NWA had scheduled a PPV featuring their “Bunkhouse Stampede,” another variation on the battle royale. Vince McMahon decided to air the first Rumble — on free TV — on the same night. (To see which wrestling promotion prevailed, check your cable package for NWA shows.) While the WWF may have been a bit churlish in aping the NWA’s battle royale concept, the difference between the two shows couldn’t have been plainer. The Bunkhouse Stampede was gritty and real, as if the NWA was using the PPV format to push wrestling back in the direction of its earlier days, when wrestling seemed so real. The Rumble, on the other hand, was shiny and contrived, a mainstream confection as only the WWF could produce.

This clash of sensationalism versus realism took place on January 24, 1988. That was 24 years ago, and after more than two decades we’re still watching the same tension unfold in the ring. Lately, WWE has given its fans outright mockery, assaults on the fifth wall (whatever that is), and subversions of the fans’ expectations. We’re moving into a psychedelic new era of post-reality. One could even theorize that McMahon, a competitor so zealous that he obliterated basically all of his competitors, has found a new adversary in the know-it-all fans of the Internet Era. The fans demand reality, and he peddles a product that’s unapologetically over-the-top; we hail CM Punk, and McMahon counters with Jericho and Clay and the Cena-Kane feud. He’s not trolling us so much as he’s re-exerting control.

So Sunday, when the carefully staged madness of WWE is on full display at the Royal Rumble, look at it this way: Vince is doing what he thinks is right. It’s evolution, survival of the fittest, and WWE already out-adapted the competition. They went head-to-head with the Bunkhouse Stampede and look what won — the pomp, the circumstance, the brightly colored and carefully choreographed cartoon bounty that is the Royal Rumble.

If WWE happens to tweak a few know-it-all, die-hard fans along the way, then, well, what do you expect? It’s those fans who are the competition now, and Vince will never back down from a fight.