The Alien Has Landed 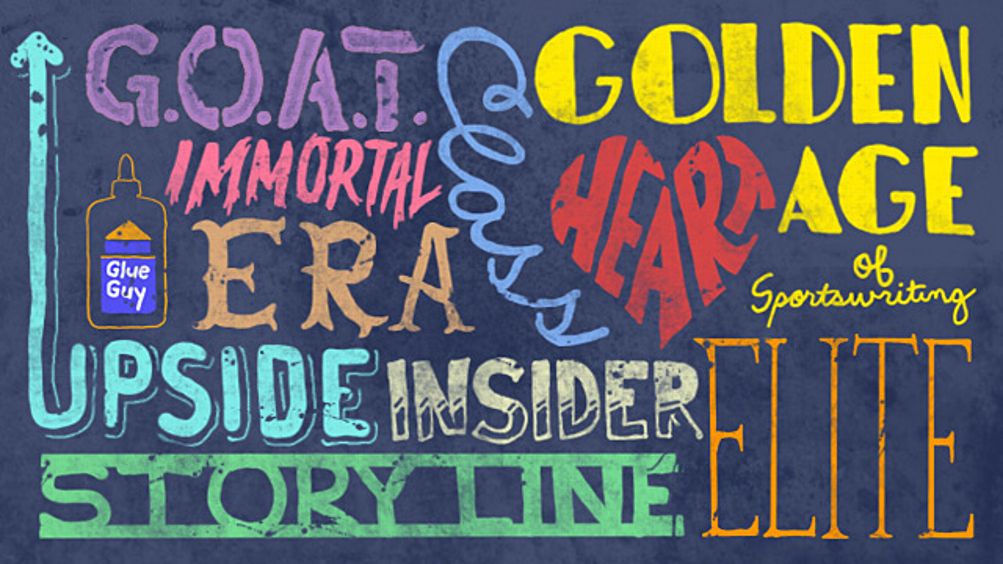 The journalist Ambrose Bierce (1842-1914) vanished in Mexico before he could add sportswriting clichés to The Devil’s Dictionary. Too bad. I would have liked to have seen what Bierce made of “distraction” and “glue guy,” not to mention everyone’s favorite: “first-ballot Hall of Famer.”

“The Devil’s Dictionary of Sportswriting” is a reference guide for readers and writers alike. When discussing sportswriters, I use the “we” pronoun because I’m as guilty as anyone else.

adviser (n.) — a person who leads an athlete astray. The adviser may be known (Scott Boras, say) or presumed missing (“Who’s advising Michael Vick?”). When advice is required, a sportswriter will kindly offer it on the house: “Free advice for tennis’ top stars.”

bust (n.) — a bad draft choice, and, later, a precious commodity for “whatever-happened-to” features and listicles. Bleacher Report has published three versions of the “Biggest NFL Draft Busts of All Time.”

centerpiece (n.) — the most important player in a proposed, often-fictitious trade. Synonym: “lynchpin.”

class (n.) — one of the sportswriterly virtues. A “classy” athlete is a deferential one, both to us and to his opponents. A “classless” coach is one who skips the postgame handshake.

columnist (n.) — a writer who produces less copy than a blogger.

commit (n.) — short for “commitment.” On college sports recruiting sites, it means a high school player who has pledged to play for a particular school. A commit who’s wavering about his decision is said to be “soft.”

distraction (n.) — an impediment to winning, which may take the form of a love interest, an entrepreneurial career, or an appearance in a country music video. A distraction is usually diagnosed retroactively. “The Super Bowl Shuffle” might have been the mother of all distractions, but the Bears won, so it’s the subject of a Grantland oral history.

Draft Winds (pun) — a pun headline that has been placed atop NFL draft stories since at least January 1990, when it appeared in the Sporting News.

durability (n.) — a football player’s knack for surviving a sport everyone agrees is too violent.

era (n.) — an arbitrary period of time. Often demarcated by the presence or absence of a superstar: “the post-Jordan era.”

fandom (n.) — it used to be that sportswriting enforced a bogus neutrality; now, it demands that every sportswriter, at least once in his career, write a long piece explaining why he’s a fan of a team. Such pieces sometimes include lots of childhood memories and references to at least one relative (who may be dead).

fantasy sports (n.) — like fandom, a subject the sportswriter once couldn’t write about and now can’t stop writing about.

far apart (exp.) — the inevitable distance between a team and a player in a contract negotiation. The phrase may also be used in labor talks: “Gary Bettman: Sides ‘still far apart.'”

G.O.A.T. (slang) — short for the “greatest of all time.” It has effectively replaced the old term “goat,” which meant “choker.” Bill Buckner was a goat; Floyd Mayweather claims to be the “G.O.A.T.”

green (adj.) — the color of outfield grass. It is often startlingly so. Paul Simon, pinch-hitting as a sportswriter in 2008: “How beautiful! The emerald green grass, the old-fashioned white facade and the dots of color that were the fans in their seats.”

glue guy (n.) — a player whose true value (or so the writer says) can’t be quantified with stats. A sportswriter favorite.

Golden Age of Sportswriting (n.) — usually the 1920s, but the phrase may refer to the glory days of Laguerre’s Sports Illustrated, Walsh’s Inside Sports, or the Gammons-Ryan-McDonough Boston Globe sports section. Stanley Woodward, 1949: “After considerable research I can find no evidence to support the theory that sports writing had any good old days. … The only thing that interests me is the modern American sports page which, as far as I can see, owes nothing to antiquity. It didn’t even evolve. It sprang full-fashioned from the forehead of Zeus.”

hardware (n.) — championships, in the form of trophies. If a player doesn’t yet have hardware, he might have “scoreboard.”

heart (n.) — an elusive quality associated with a player or team. See “identity.”

identity (n.) — When a talented team plays badly, a sportswriter goes looking for qualities it might lack. “Heart” is usually the first of these. But a team like the 2012-13 Lakers — which has a mishmash of coaches and lineups — is said to lack an “identity.”

immortal (n.) — common as a noun, i.e., “one of the immortals.” Becomes awkward when an athlete dies — an act that would seem to establish his mortality beyond all doubt. A 1953 obituary for Jim Thorpe proclaimed, “Immortal Athlete Passes.”

insider (n.) — a beat writer or league writer, repackaged for the digital age. These days, there are NFL Insiders, Red Sox Insiders, and all kinds of insiders at ESPN Insider. An insider’s job is to tweet out news a few seconds ahead of the competition.

jonrón, un (n.) — Spanish for home run, and an occasion for the Spanish-language sportswriters to write as floridly as their English-language counterparts. The Associated Press described a 2011 Yankees-Tigers game as “una feria de cañonazos de cuatro esquinas” — a carnival of four-corner cannon blasts.

kid (n.) — an honorific for a young athlete. The sportswriter needn’t be more than a couple years older than the “kid” to use the term. It establishes that the writer, not the player, is the adult in the room.

leadership (n.) — another virtue. It usually means the ability to talk loudly in huddles and locker rooms, or else quietly, in the sense of “leading by example.” Sometimes a synonym for “unselfishness”: Tom Brady showed “his well-established leadership by reworking his contract for later years at under-market value.”

legacy (n.) — how an athlete will be viewed in a few decades, as judged by a sportswriter whose column is due in an hour.

light (n.) — the quality and color of light is a perennial concern of the sportswriter. It stretches from Grantland Rice’s “blue-gray October sky” to Buzz Bissinger’s glowing stadium lights to S.L. Price’s Aliquippa, in Western Pennsylvania, where darkness “dropped early and hard.” If you go to games, the light is indeed striking, though its quality is nearly impossible to judge from a press box.

locker-room cancer (n.) — the opposite of “clubhouse leader.”

mature (adj.) — a mature athlete, for a sportswriter, is one who spends his every waking hour on sports.

media critic (n.) — once, the title referred to Rudy Martzke or Phil Mushnick, but now, thanks to Twitter, sportswriters all gripe about and/or praise the media. This development is blamed on Internet meanies, but it probably reflects the convergence of sportswriterdom and fandom. The two things every fan does when watching sports are complain about the refs and complain about the announcers.

moment, the (n.) — an important game. If an athlete crumbles, it’s said that the moment was “too big for him.” Sometimes known as “the stage.”

Moneyball (n.) — (1) personnel management using advanced stats; (2) a book every sportswriter thinks he could have written.

motor (n.) — the measure of an athlete’s effort. A player can have a “great motor” or there can be “concerns about his motor.” When employed too often, we all sound like pit men at Daytona.

off the field (n.) — a player’s existence outside of sports. Negative when employed as an adjective: “off-the-field concerns.”

Olympics (n.) — an international grift that a sportswriter denounces from an intercontinental hotel.

outspoken (adj.) — worth quoting. If one sportswriter gets a story out of an outspoken player’s comments, it’s customary for another journalist to write a story claiming the quotes represent a terrible breach of etiquette.

power rankings (n.) — power rankings have two purposes: (1) they satisfy our lifelong desire to sort players or teams in order of greatness; (2) they make for a reliable weekly column. The word “power” is a tip-off they’re not based on empirical evidence.

prima donna (n.) — a wide receiver with a reality show.

ran out of time (exp.) — a long-lived phrase originally credited to Vince Lombardi, who once said something like, “We didn’t lose the game, we just ran out of time.” In December, Troy Aikman used a version when Adrian Peterson failed to break the NFL’s single-season rushing record. Like a lot of Lombardisms, the phrase has traveled outside sports. JFK conspiracist Jim Garrison wrote of his investigators, “They never stopped fighting to bring out the truth. They only ran out of time.”

scout’s take (n.) — a genre frequently used by Sports Illustrated in which an anonymous pro talent evaluator breaks down a player’s game. Terrifying for the sportswriter, the scout’s take is often pithier and better-written than his own.

scrappy (adj.) — small and hardworking. Tommy Craggs, 2009: “‘scrappy’ serves as an implicit rebuke to the super-sized stars of the so-called Steroid Era, in much the same way it once carved out a fatuous distinction between white ballplayers and black and Latino ballplayers.” At times, the opposite of “flashy.”

sex (n.) — Robert Lipsyte, 1975: “In the minds of most sportswriters, money and women are the termites of athletes’ souls.”

stathead (n.) — “a mechanic with numbers,” in the words of Bill James. Statheads are also known as sabermetricians, numbers guys, or stats geeks. Murray Chass calls them “new-age stats guys,” which sounds like Nate Silver has become a shaman and moved to Sedona.

story line (n.) — every game, from Pop Warner to the Super Bowl, has a “story line” — essentially, a theme that’s larger than the game itself. But lately, it has become trendy to use the S-word explicitly — i.e., “Top 10 Super Bowl Storylines.” Talking about story lines offers the writer a meta-defense for writing the same piece everyone else is. When Peter King writes, “Okay, we’ve gotten the obvious storylines out of the way,” it means he has done his duty and is getting to the good stuff.

Strat-O-Matic (n.) — archaic. A dice game referenced by sportswriters who grew up before Madden.

take (n.) — (1) an opinion; (2) recruiting-ese for a high schooler who’s worthy of a scholarship — i.e., “That kid’s a take.” Appropriately thievish, since the recruit will be conscripted to play for free.

tank (v.) — to lose games on purpose in order to get a better draft pick. The older, more fragrant term was “dump.”

television (n.) — Leonard Shecter, 1969: “Television is like some gentle, mindless robot carrying sports tenderly in its arms to the top of the mountain and then over the cliff.”

trade demand (n.) — when an athlete asks for a trade in private, it’s a “request.” When he asks in public, it gets elevated to a “demand.”

trade rumor (n.) — something a general manager likes to see in print.

unselfishness (n.) — the greatest of sportswriterly virtues. Our fascination with unselfishness proceeds from two assumptions: (1) athletes are inherently selfish; and (2) unselfishness, when reluctantly embraced, will always help a team win. Pete Axthelm, 1970: “Self-sacrifice must be learned, often through laborious practice and occasionally through suffering.”

window (n.) — the time period during which a team can win a title. “Has Patriots’ Super Bowl window closed?” ESPN (and everyone else) asked back in January. Championship windows make for better columns when they’re closing rather than opening.

winner (n.) — a player who collects hardware, often despite a confounding lack of natural talent. When a sportswriter says, “He’s just a winner,” he has given up trying to figure out what makes the athlete win.