A Case of Olympism 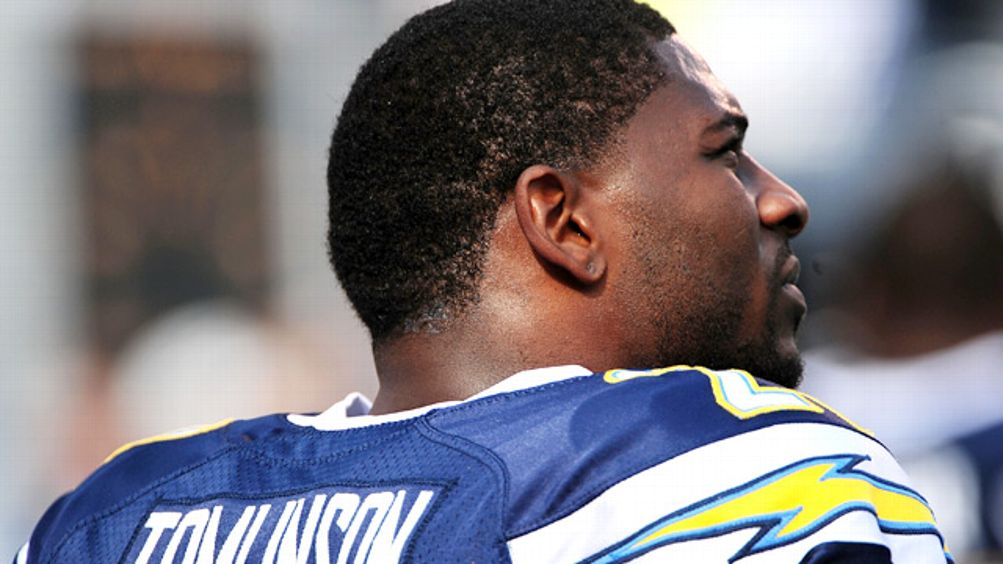 When Grantland’s Bill Barnwell posted his “Who’s the best running back?” piece on Monday, I found myself thinking about the last guy who carried that belt for a significant chunk of time. Chris Johnson, Larry Johnson, Priest Holmes … those guys were A-list blips. They came and went faster than your average UFC champ. LaDainian Tomlinson hung around. He wasn’t just great; he was great for a prolonged period of time. He owned the 2000s, basically. When you think of a running back from that decade, you will think of him first.

You might remember Tomlinson retiring during last month’s NBA Finals, getting buried under a slew of hyperbolic stories like “Is Dwyane Wade washed up?” and “RUSSELL WESTBROOK IS TOTALLY OUT OF CONTROL!!!” Media members paid tribute by recapping Tomlinson’s career with the same three points. The man was …

1. One of the NFL’s greatest all-around running backs.

2. One of the best players who never played in a Super Bowl.

3. Along with Junior Seau, one of the two best San Diego Chargers ever.

Everything felt vaguely familiar. We see the same SportsCenter dance whenever a great athlete retires: Tears during that final press conference, some vintage highlights, then a talking head gushing praise while emphatically waving his hands. The following day, mainstream writers carefully avoid negativity in their sports obituaries … you know, unless PEDs, crimes or general weirdness make it impossible. In Tomlinson’s case, everyone danced around his checkered postseason history (10 games, 468 rushing yards, seven touchdowns, three upset losses to a lower seed) and his blatant hijacking of Lawrence Taylor’s nickname. You don’t nitpick when great athletes walk away. You just don’t.

Of course, everyone missed Tomlinson’s true legacy, something that never dawned on me until the night he retired. Visiting Miami for the NBA Finals, my friends and I were having a pre-dinner drink when our bar’s television started cranking out Tomlinson highlights. We watched for a few seconds before my buddy Hirschy nudged his brother and excitedly yelped, “Remember ’06? Thirty-one TDs!!!! Single-handedly won us the title that year!”

They high-fived. I thought this was funny for about 2.9 seconds — two brothers happily remembering a six-year-old fantasy team the same way that I would remember, say, the 2004 Red Sox. Then I found myself drifting back to the following season, when I picked Tomlinson first in my West Coast league, landed rookie Adrian Peterson a few rounds later, struck oil with Wes Welker and cruised to the 2007 title with my favorite fantasy squad ever. I loved that fake team of randomly selected guys! Heck, I even wrote an entire column after Week 6 about my chances of going undefeated, ultimately deciding that it was impossible (and by the way, it was).

That’s when it struck me. If the Internet made fantasy football “mainstream” these past 10 years, then Tomlinson has to be considered the most influential fantasy footballer ever. How many lives did he affect without actually knowing it? Maybe you lost your league because of one of Tomlinson’s textbook 30-pointers — you know, when he torched some downtrodden AFC sap (usually the lowly Raiders) for three scores in a 45-10 blowout. Maybe your league switched from draft to auction after everyone realized it wasn’t fair that Tomlinson kept swinging the title. Maybe your friends still remind you, “Yeah, you won in (fill in the season), but only because you had Tomlinson.” How many titles did he capture for fantasy addicts around the world? Seven million? Ten million? Twenty million? More than that?

After dinner, I returned to my hotel room and looked up Tomlinson’s relatively staggering numbers. His durability jumped out immediately: just six missed games and seven straight seasons of 375-plus touches. He scored 162 times in 170 games, trailing only Jerry Rice (20 seasons) and Emmitt Smith (15 seasons) and blowing away contemporaries like Marshall Faulk (136), Walter Payton (125) and Barry Sanders (109). The great Jim Brown scored an astonishing 126 touchdowns in 118 career games; Tomlinson was the only other runner who came close to averaging one per game. (Had he retired after nine years like Brown did, it would have happened.) Tomlinson also finished fifth in career rushing yards (13,684), fifth in yards from scrimmage (18,456), 55th in career receptions (624, the third-highest running back behind Larry Centers and Faulk) and fourth in career “touches” (3,798, trailing only Smith, Payton and Curtis Martin). All of those achievements were impressive, especially since they happened in just 11 seasons.

And yet … nobody really cares. In baseball, career numbers matter because it’s a statistically driven sport, and because Cooperstown lingers over every big-picture baseball argument. We also need reasons to stay awake as we’re slogging through three-hour games and watching pitchers stare blankly at catchers for 25 agonizing seconds per pitch. Looking backward kills the time. It’s much more fun to look forward in football. When is Week 1? When is our fantasy draft? What are we wagering on? Who should we bet on to win the Super Bowl? Where are we watching the games? Who’s playing the late games? What’s the Monday-night matchup? Who do you like? Forward, forward, forward.

Besides, there’s little incentive to compare NFL players with numbers. What’s the point? You would never argue the merits of legends with different positions — say, John Hannah versus Terry Bradshaw — and it’s futile to debate skill-position guys from different eras when sizes, offenses and rules keep changing so dramatically. When I first fell for football in the mid-1970s, the NFL’s most frightening deep threat was Oakland’s Cliff Branch, whose three-year peak (34 touchdowns, 157 catches, 3,096 receiving yards) could barely pass for back-to-back Calvin Johnson seasons today. That’s why we tend to evaluate NFL players by the admittedly murky question, “Were they great?” Yes or no. You just kind of know. Mike Singletary was great. Ronnie Lott was really great. Lawrence Taylor was really, really great. You don’t need to go much further than that. You’re either in the “great” club or you’re not.

So it was unusual that Tomlinson became one of the rare football stars defined by his numbers … or in this case, his fantasy numbers. He played the most crucial fantasy position during our most important fantasy decade, coincidentally submitting the best six-year statistical stretch in modern running back history.

Did you even remember those Priest numbers? Yeah … only if he carried your fantasy team in 2002 or 2003. We tend to remember athletes for how they affected us. We’re selfish that way. Fantasy Priest mattered much more than Real Priest did. Could you say the same about Tomlinson? As insane as this sounds, I believe Fantasy LaDainian will become the biggest piece of Real LaDainian’s legacy, simply because we’re the ones who will keep Fantasy LaDainian alive.

If you had Tomlinson from 2002 through 2007, you knew he guaranteed you at least 15 points every week, and that he’d single-handedly win your week three or four times per season. If you were competing against him, you always felt like an underdog, like your team was playing uphill for the entire weekend … and Lord help you if you were spotting Tomlinson less than 20 on a Monday night. In real life, Tomlinson’s retirement nudged him into that hallowed group with Emmitt, O.J., Jim Brown and every other transcendent runner. In fairy tale football? He’s the bar. The gold standard.

That’s a good thing, not a bad thing. Try to remember Tomlinson’s prime for 10 seconds without thinking of your heart stopping every time you heard James Brown or Greg Gumbel suddenly say, “Let’s go to San Diego … ” That’s when you either pumped your fist or muttered an obscenity, and only because you knew what was coming next: LaDainian Tomlinson was headed for the end zone again. Maybe he never won himself a championship, but he took care of just about everyone else.

July 25, 2012: This column has been revised to reflect the following correction: