The Madness of Paolo Di Canio

Week 5 College Football Viewing Guide: We've Got a Live One 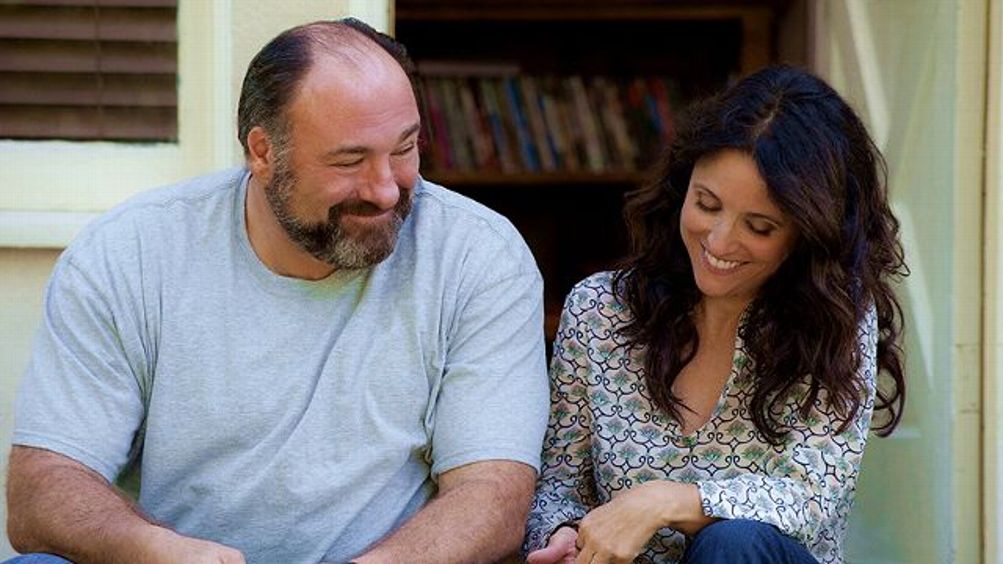 Last week, the Oscar race began. Not the preliminary/imaginary one, an epidemic of inside-the-bubble hysteria conducted at a dog-whistle frequency in which contenders soar, crash, burn, and rise again from their own backlashes weeks or months before they open — the real race, the one in which actual movies open in theaters and humans can see them and judge for themselves. There’s no official ribbon-cutting moment for the start of Oscar season, but Sunday was, after all, the first day of autumn, and the end of the first weekend in a long time in which the talk was not about One Direction or Insidious: Chapter 2 but about well-reviewed films aimed at a demographic that isn’t devoting all of its entertainment dollars to Grand Theft Auto V.

And how gratifying that the weekend turned out to offer both a surprise and a test. The surprise is that Nicole Holofcener’s low-cost, low-key comedy-drama Enough Said, a movie that didn’t make much noise at the Toronto Film Festival and opened with little Oscar buzz of any kind, beat Ron Howard’s Rush, the definition of a pedigreed Academy thoroughbred that had been residing comfortably on Oscar-guesser short lists for months. The test is whether the airless Oscar ecosystem, which does not like disruptions, will now permit Holofcener’s movie to become part of the discussion.

When I say that Enough Said “beat” Rush, believe me, I’m aware that I’m setting up a largely stupid rivalry between two movies that have nothing in common but their release dates. But since Rush itself is a pretty interesting exploration of how much emotional and financial investment can be poured into a largely stupid rivalry — one in which even the smallest point differentials matter — indulge me. I’m using two metrics to make the comparison: Enough Said‘s per-screen average of $58,200 on four screens easily surpassed Rush‘s ($37,458 on five), and on the criticism-aggregator site Metacritic, which assigns numerical values to major reviews from 0 to 100, Holofcener’s movie won, 74-73.1

This matters not because anybody wants to say “In your face, Ron Howard!” but because the presumption that a filmmaker like Holofcener, and a film like Enough Said, just don’t qualify as Academy material is symptomatic of a pretty spectacular blind spot in Hollywood. The calcified mind-set that would marginalize the cohesive and thoughtful 18-year body of work of a major indie filmmaker extends far past the demographically imbalanced Academy votership — which is old enough and male enough to relate perfectly to Howard’s story of a duel between two Formula 1 drivers in the 1970s. But it’s also endemic to an industry that starts from the assumption that modestly scaled work by a woman isn’t worth a serious Oscar push and then has to play catch-up. In the case of Rush, it’s Hollywood that tells the world, “This is an Academy movie”; in the case of Enough Said, it’s the world that has to tell Hollywood.

And Hollywood is sometimes grudgingly slow about getting the message. Some have dismissed Enough Said as too “minor” and “TV-ish” to resonate with Academy voters, but I’ve heard those terms often enough in recent years to understand that “minor” often stands in for “female” and “too TV-ish” is code for “this movie actually has a script in which people talk to one another.” I’ve also heard some detractors complain that the romantic plot line of Enough Said hinges on a sitcom-like contrivance — much depends (this isn’t really a spoiler) on one character’s seemingly willful failure to reveal that she knows an important piece of information about another. I couldn’t disagree more strongly; if we’re disqualifying movies because of plot contrivances, I will shortly be issuing a recall of several recent Oscars for Best Picture; besides, the maturity and intelligence of Holofcener’s script is that it sets up that contrivance solely for the purpose of exploring in an honest, funny, and painful way how seriously flawed people living in a laugh-trackless universe might handle it. As Wesley Morris has noted here, yeah, it’s like TV, but the right kind of TV: Nothing could less resemble the stale network sitcom some of its detractors imagine it to be echoing.

The numbers, and the reviews, suggest that Fox Searchlight, which is distributing Enough Said and is now hurrying to get it onto more screens, should make a serious push for Holofcener’s script, and for a Best Supporting Actor nomination for James Gandolfini’s disarmingly vulnerable and tender valedictory performance. But I would also suggest that Julia Louis-Dreyfus belongs in the Best Actress conversation for work that not only puts her honed-over-decades comic timing to excellent use but lets her dig into her character’s pettiness, vulnerability, and vanity in a revelatory way. (By the way, did anyone have a better weekend than Louis-Dreyfus, who capped it by collecting her second consecutive Emmy for Veep? Her acceptance speech was, literally, a better comic performance than most I’ve seen in movies this year.) Being funny is hard enough, but Louis-Dreyfus really distinguishes herself in the many moments in which the character she plays isn’t in full control of the way she presents herself; the off-pitch scenes in which she and Holofcener collaborate to present a character who’s not as nice as she thinks she is are the ones that stick with you. I know this argument will be an uphill climb — Louis-Dreyfus is 52, she has made her career in TV, she’s funny, and she apparently doesn’t give a rat’s ass about being a movie star, all of which makes her Oscar-unfriendly. But perhaps while The Weinstein Company sorts out exactly how it’s going to mount campaigns for all 72 women in August: Osage County, some attention might be paid to an actress in a movie you can go see right now. After all, there are still four exciting opportunities for women to sit near Cate Blanchett.

I hasten to add that Rush also belongs in the conversation: It’s a movie almost custom-built to appeal to the Oscar-voter demographic that veteran awards watcher Anne Thompson calls the “Steak Eaters” — the regular guys of a certain age in the craft divisions who don’t go for fancy-pants art films (they might watch Blue Is the Warmest Color, but possibly for the wrong reasons) and who like their movies served up in handsome, large-scale, studio-size portions. They are not a majority within the Academy, but they’re a serious constituency, and the renewed vigor and muscularity of Ron Howard’s direction — as well as the ace cinematography (by Slumdog Oscar winner Anthony Dod Mantle), editing, sound mixing, and sound editing could make the movie a viable contender in several categories.

There’s also noise about a campaign for Daniel Brühl, the magnetic German actor who gives a fine, biting performance as the testy Austrian racer Niki Lauda. Although Rush is about the competition between the by-the-book, Ivan Lendl–ish Lauda and the brash, freewheeling asshole live wire James Hunt (Chris Hemsworth, slimming down and stepping up from Thor), and the movie gives their personal lives equal attention, Brühl is for some reason being talked about as a Best Supporting Actor candidate. This is one of those category-fraud moments so brazen that you wonder if the people who made Rush even want the story they have invested so much time and effort in telling to be perceived accurately. Is the movie, as it appears to be, about two intense alpha dudes who are driven to achieve victory in profoundly different ways? Or is it, as the Oscar campaign would suggest, about one big, tall, handsome blond guy and his aspirations and feelings, and only secondarily about this other guy who keeps getting in his way and whose aspirations and feelings the camera and the script sure seem to spend a lot of unwarranted time with? If Lauda is truly meant to be a supporting character in Rush, then everybody involved did a really bad job making the movie. They didn’t, and he’s not: Instead, Brühl is every Academy Award campaigner’s worst nightmare — a super-talented, little-known co-lead with an umlaut in his last name.

This weekend brought another sign that the Oscar year has begun: the delivery to Academy members of the very first DVD screener (which, future hype about standing ovations and joyous fainting spells at Academy screenings notwithstanding, is the way most Oscar voters will end up seeing most movies). And the winner is … Mud, writer-director Jeff Nichols’s modern Mississippi riff on Huck Finn that first appeared way back in May 2012 at the Cannes Film Festival and became a robust little success when it was released this spring. For a movie without studio backing, there’s some advantage in being first into the mailbox — two years ago, a very early screener started Demián Bichir on his road to an unexpected Best Actor nomination for A Better Life. But Mud, like Rush, is playing the category-fraud game, pitching its best Oscar hope, the top-billed Matthew McConaughey, as a supporting actor so that he can be campaigned as a lead for next month’s Dallas Buyers Club.

This is kinda cheap, but I’m sympathetic to the fact that any movie that opens before Labor Day, especially an indie, has a terribly difficult time gaining traction. In an Oscar contest that wasn’t overdetermined by the Darwinian apportioning of marketing dollars and the short memories of voters, we might spare a moment to talk about James Franco’s hilarious, pathetic, and terrifying work in Harmony Korine’s Spring Breakers, or Emma Watson, laying out with surgical precision the self-interested vacant “earnestness” of a modern American girl in Sofia Coppola’s The Bling Ring, or Julie Delpy’s unsentimental honesty as a woman who is both a patient and mature spouse and a volatile pain in the ass in Richard Linklater’s Before Midnight. But in terms of the Academy Awards contest, the first eight months of the year are almost always treated as some sort of sinking ocean liner that carries everyone’s hopes and dreams safely to the bottom of the sea by Thanksgiving. There are always exceptions — this year, life jackets are being thrown to Blue Jasmine and The Butler and Fruitvale Station and maybe even to Before Midnight (Delpy may not have much of a shot at a Best Actress nomination, but she, Ethan Hawke, and Richard Linklater could contend for a writing nomination, as they did for Before Sunset). But their fates will likely depend on whether the fourth quarter of 2013 holds any more stealth successes like Enough Said — and on how many “sure things” like Rush find themselves with a bit of unanticipated engine trouble at the starting line.