The Lies He Told 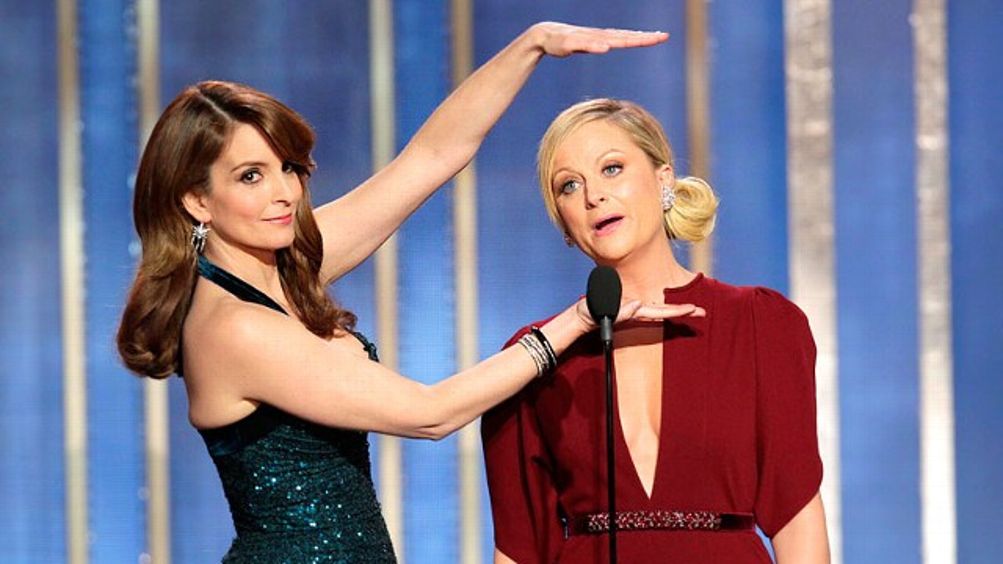 It was live from Hollywood and it was Sunday night, but Tina Fey and Amy Poehler killed just the same. As cohosts of the 70th Golden Globes, the two were sweet and savage, gracefully power-stripping an already silly event of any sanctimony (quoth Poehler: “You can smell the pills from here!”) without ever losing their smiles or offending any Scientologists in the process. It was a far cry from the preening narcissism of big award-show hosts past and, unfortunately, future. It’s too bad Maggie Smith wasn’t at the Beverly Hilton to collect her trophy; even the fearsome dowager countess could have learned a thing or two about quippy etiquiette from the former “Weekend Update” partners. Even at a swank dinner party like the Globes they’re polite enough to use the correct knife when skewering a guest.

That Fey and Poehler managed to be funny and unflappable, whether waterboarding James Cameron in absentia or losing to Lena Dunham from the cozy confines of George Clooney’s lap, should be no surprise. What’s shocking is that no one asked them to do this earlier. The two have been friends for decades and their she said, she said act was honed in stinky vans and stinkier college lounges all across the Midwest before it ever made it to Studio 8H. Since Hillary Clinton’s husband’s final years in the White House, Fey and Poehler, together and apart, have been beamed into our homes weekly, making news and shaping it and gradually redefining what we come to expect from comedy on TV. Their Golden Globe triumph was an overdue celebration of their 10-year march from terrible haircuts to universal acclaim. But it was also an unwelcome reminder that their regularly scheduled appearances on our televisions may soon be coming to an end. 30 Rock goes dark in just two weeks, Parks and Recreation — as low-rated as it is critically praised — faces an uncertain future. “No one plans to do porn, Tina!” was one of Poehler’s best gags on Sunday night. But I can’t help but think no one is planning for a TV landscape without these two on it, either.

It’s a funny thing about television — funnier even than the time Liz Lemon turned into a Batman villain: By giving us such free and unfettered access to great talent it simultaneously flattens and normalizes the experience. The masters of the medium tend to be the ones we notice less and take for granted more, especially those rare and hardy souls we allow to age in front of us — the Lettermans, the Stewarts, the Opraii. Fey and Poehler haven’t sat behind a desk since the SNL days and they remain wonderfully distinct, idiosyncratic performers — Fey a dry, mouthy vermouth to Poehler’s fizzy, physicalized pop. But both women made their bones as improvisors, a comedic tradition that tends to privilege the good of the group over the ambitions of the individual. (A proper Harold is only as good as its weakest member. Anyone who’s sat through a draggy “dinner party” sketch can tell you, a stray Ringo doesn’t make you the Beatles, it makes you the All-Starr Band.) Accordingly, the two have spent so much time making other people look good — everyone from Jimmy Fallon to Rob Lowe has seen his talents and timing improve by proximity — that it’s easy to overlook how much better they’ve made everything around them.

Reach back into the flannel-clad back passages of your mind, if you will, and consider the ’90s. It wasn’t just the anchor desk at “Weekend Update” that was dominated by the heavy-footed punchlines of male comedians, it was TV comedy in general. Thanks to big fish like Jerry Seinfeld and Ray Romano, motivated jokers had a ready-made itinerary that went much further than the Chuckle Factory in Phoenix: It involved honing an act, getting a development deal, and hitting it big. But stand-up is a solitary trade, and TV success didn’t seem to change that much; Seinfeld gave its star untold millions and an airplane hangar full of Porsches, but he never tossed anyone else the keys. In the face of this macho capitalism, Fey and Poehler were like merry Marxists — is it any wonder their Chicago Improv group was called Inside Vladimir? — eschewing ego for good vibes and better jokes. You can see both the generation and gender gaps yawning wide in the duo’s 2004 appearance on The Tonight Show. As the yuks-and-jiving careerist Jay Leno tries to make sense of his guests’ time in the Second City touring company, he asks first about their income — only $100 a show?!? — then assumes their agent was taking his 10 percent off the top of that. “Oh, even back then we had high-powered agents,” Poehler deadpans. (Leno didn’t help his irrelevance much at the Golden Globes this weekend, where the New York Times quoted him saying “Parks and Recreation is my wife’s favorite show.”)

In the years since leaving SNL, Fey has honed a comic persona straight out of an Atlantic article, papercuts and all. But Liz Lemon’s foibles — as she put it in last week’s brilliant-as-ever episode of 30 Rock, “being a woman is the worst” — are the funny flip side to Fey’s own methodical competence. With 30 Rock, she crafted a star vehicle for herself and gave someone else the best part. Instead of burning herself out on an American Idol–style solo, she used her powerfully defined voice in harmony with a second generation of hilarious geniuses — many of whom have recently migrated to bigger, potentially even better things — to radically redefine what a sitcom should and could be. No show has ever offered such high-quality jokes at such an outrageously breakneck pace. Watching an episode of 30 Rock, even now in its final weeks, is like browsing Hermès on rocket-fueled roller skates: There’s too much, too fast! But Fey didn’t just raise the game, she fundamentally changed it: Sitcoms post–30 Rock are like the ATP World Tour post–wooden rackets. More importantly, the speed of Happy Endings or Community isn’t just for show; it’s democratizing and exhilarating. It’s the collaborative, shouty frenzy of a Groundlings show — or an overly caffeinated writers’ room — delivered directly into our living rooms.1

Poehler’s generosity as a performer has been no less groundbreaking. When Parks and Rec debuted, it was intended to be an Office-like vessel for Poehler’s outsize charms. But the factory model was a bad fit: Leslie Knope 1.0 was a flop, a cartoony weirdo who somehow succeeded despite her offputting quirks. This was Sitcom 101 for the typically broad male comedy star, but the cluelessness of the character clashed terribly with the sheer force of Poehler’s personality. Whether playing a sugar-bombed preteen or dropping a hot 16 while nine months pregnant, belly shaking like one of Flavor Flav’s oversize clocks, Poehler’s talent lies not in her fearlessness but in the follow-through. At her best, she’s the living embodiment of improv’s golden rule: to always say yes to whatever is thrown your way. And so Leslie’s script was flipped: Now she succeeded because of her type A obsessiveness; she was transformed into a steamroller of positivity — either climb aboard or get out of her way. The switch saved the show, created a worthy feminist icon, and brought the overall fiction more in line with the reality of its star. While not as involved behind the camera as Fey, Poehler’s role in the founding (and funding) of the Upright Citizens Brigade has filled the airwaves with funny people formed in her image, a generation of jubilant weirdos taught to be sweet without being soft, sharp without being cutting.

The biggest laugh on Sunday came when Lena Dunham, in a ham-handed attempt to pay tribute to the accomplished ladies she’d just bested, thanked Fey and Poehler for “getting [her] through middle school.” In response, the fortysomething co-hosts emerged from backstage with drinks in hand, snarkily toasting their faded youth. Dunham intended no slight, but she actually was on to something: Fey and Poehler are indeed the mothers of her style. Thanks to their unshowy toil, network TV comedy is now a female-fronted enterprise, from the adorkable New Girl to the untrustworthy B in Apt. 23, with Anna Faris and Malin Akerman set to join the scrum this fall. (Compare the dynamos that Dunham defeated to their nominated male counterparts. Jim Parsons? Still?)

But it was Dunham’s second acceptance speech that probably should have included the shout-out to Fey and Poehler. When Girls won for Best Comedy Series, it was Dunham herself who claimed the trophy — and with good reason, as she’s not only the star, she’s also the creator, executive producer, writer, and director. She’s telling her own story and has been entrusted with the power and budget to tell it the way she sees fit. It’s a titanic — and, until recently, quite rare — responsibility and one she’s handled with such grace that it’s almost possible to forget the role models who helped make it happen, the ones sipping lowballs in fake mustaches just behind the curtain.

My favorite story about Tina Fey and Amy Poehler comes from a chapter in Fey’s memoir, Bossypants. In it, she describes watching a newly arrived Poehler acting out a lewd bit in front of the cast. A horrified Jimmy Fallon cries out, “Stop that! It’s not cute! I don’t like it!” And Poehler, eyes blazing, replies, “I don’t fucking care if you like it.” The takeaway — in Fey’s words, “Do your thing and don’t care if they like it” — may sound unnaturally harsh, particularly for two women currently being praised for making every gasbag in Hollywood feel, for once, like they were on the right side of the joke. But it’s the necessary — and too often overlooked — steel underneath the sunniness, the backbone lurking just behind the blerg. Tina Fey and Amy Poehler may be leaving TV — they may even be, as Poehler joked on Sunday, “going home with Jodie Foster” — but with such a generous legacy of goofiness and grit, there’s no question they’re leaving it in much better shape than they found it in.