So, I never watched The O.C. That’s a fact, not a value judgment. I’m not one of those insufferable boors who brag condescendingly about not watching supposedly disreputable TV shows. I’m merely providing a context for my perspective on The O.C. I was in my early 20s and single when it originally aired, and my intense interest in hanging out in bars every night and ordering 27 Jack and Cokes at a time prevented me from keeping up with the most iconic teen-oriented drama of the early 21st century.1 But like any transcendent pop culture enterprise, The O.C. reached millions of people beyond its core audience. For a couple of years it was unavoidable, even if you were a rock fan content to sit out O.C.-mania. Maybe especially if you were a rock fan.

Here’s the sum total of what I know about The O.C.: It was broadcast on Fox from 2003 to 2007. The main character’s name was Seth. I’m not sure which character Rachel Bilson played, but I’m aware of her presence on the show. Peter Gallagher was also on The O.C., and I assume his excellent eyebrows were fixed permanently in an arched position over the misadventures of his junior cast members.

The fifth and final thing that I (and I’m guessing most other nonviewers) know about The O.C. is that it was closely associated with a specific form of melodic, wispy, and staunchly pigment-free indie rock that was popular in the mid-’00s. This is important because (1) The O.C. is still associated with this kind of music a decade later and vice versa, and (2) this marked the last time that indie rock acted as a signifier of trendy American youth culture.

I obviously can’t speak to how well music was integrated into The O.C., but I have a sense of how The O.C. was fully integrated into indie rock and, perhaps more importantly, how it informs what indie rock represents in the popular consciousness to this day. Even now, a mid-tempo guitar ballad that builds from an acoustic strum to a climactic arms-raised-to-a-fireworks-filled-sky catharsis will immediately conjure images of pretty young couples embracing after a 43-minute emotional obstacle course composed of hot-and-heavy sexual trysts, devastating breakups, and unlikely reconciliations. Even those of us without data from the actual show were able to imagine our own version of The O.C. in our heads. This was music as tied to high school melodrama as Michael Jackson was once bonded to high-kicking zombies, back when MTV handled the promotional duties that TV dramas like The O.C. were now left to perform.

In some ways, the perception of indie music that The O.C. propagated is the show’s enduring legacy. Mischa Barton’s time as an A-list television star appears to have passed, but traces of The O.C. remain stubbornly embedded in indie’s DNA.

For a while there in the mid-aughts, indie rock was a de rigueur reference point for prestige-sniffing television shows. Remember the time Hugo invited a prospective girlfriend to a Hold Steady concert during one of those flashbacks on Lost? Or when Yo La Tengo and Sonic Youth rubbed slouched shoulders on Gilmore Girls? Who can forget the cultural epoch that was Courtney Taylor-Taylor of the Dandy Warhols materializing at Java the Hut’s karaoke night and singing “Love Hurts” on Veronica Mars? (Literally every single one of you? Well, trust me, it happened.) What happened with indie rock on The O.C. didn’t occur in a vacuum. In fact, the show’s music supervisor, Alexandra Patsavas — who became a minor celebrity in her own right as a kind of TV soundtrack auteur — applied her MOR “underground” rock sensibility with arguably greater success on Grey’s Anatomy, though the sappy bands that the show aided in infiltrating the mainstream (the Fray, Snow Patrol) could’ve fit just as comfortably on The O.C.

Here’s how The O.C. changed how music was presented on teen shows: It was perceived to be proactive rather than reactive. Before The O.C., only musicians who were already known to viewers appeared on shows like this. See Davy Jones on The Brady Bunch or Color Me Badd on Beverly Hills, 90210 as examples of this phenomenon. (Please, watch these clips — they’re hilarious.) The O.C. didn’t glom on to the notoriety of pop stars to further its own ends, it consciously set out to make pop stars in order to boost its cred. From the beginning, the idea that The O.C. was “discovering” low-key guitar-slinging mavericks was built into the show’s appeal.

The Flaming Lips performing “She Don’t Use Jelly” on 90210 in 1995 is often cited as a precursor to Seth Cohen casually dropping Death Cab for Cutie references into his regularly scheduled TV-person banter. Only “She Don’t Use Jelly” was already two years old by the time Wayne Coyne sang it at the Peach Pit, and it had long been established as an MTV hit. Giving the Flaming Lips some Nat Bussichio dap didn’t transform 90210 into some kind of ersatz alt-rock tastemaker. When Death Cab signed a deal with Atlantic Records that coincided with The O.C.‘s first season, however, it was commonly believed that the latter facilitated the former. Whether this is true is highly debatable: It’s possible (even likely) that Death Cab would’ve made the leap from indie to major label regardless of a fictional fan’s proselytizing from the heart of California’s hub for political conservatism. But the belief that The O.C. could break new artists merely by having characters talk about them was crystallized.

While The O.C. lasted only four seasons, it produced six soundtrack “mixes.” The conceit: Tracks were handpicked by Patsavas and sometimes by O.C. creator Josh Schwartz and carefully sequenced in the interest of sharing “cool” music with the show’s fans. Based on these mixes, The O.C. positioned itself as the quintessential music-nerd pal whose tastes veered toward dressed-down indie covers of classic rock songs (like Jem’s “Maybe I’m Amazed”), inexplicably popular British bands who bombed in America (like the rightfully forgotten Kasabian and Kaiser Chiefs), and Jet songs that aren’t “Are You Gonna Be My Girl?” or “Cold Hard Bitch.” 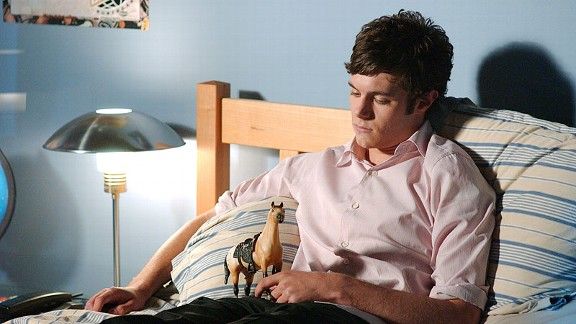 The weirdest (and therefore most fascinating in retrospect) O.C. mix has to be the last one, Volume 6. Subtitled Covering Our Tracks, this mix does indeed compile covers of songs that appear on previous O.C. mixes, as well as more reimaginings of rock classics.2 At times it resembles one of those weird “as sung by” albums that show up on Spotify for artists who don’t allow their catalogues to be streamed, where the point is to either trick listeners into thinking they’re hearing the original versions or market to people who love “Highway to Hell” but would rather hear it barked by a Bon Scott impersonator. Much of Covering Our Tracks has a similar “songs you love performed by people you’ve never heard of” vibe. Modest Mouse’s “Float On” is given the Goldspot treatment.3 The Killers’ “Smile Like You Mean It” is run through a Tally Hall filter. Spoon’s “I Turn My Camera On” is reinterpreted by something called Rock Kills Kid. What’s particularly odd about Covering Our Tracks is that the songs were only a few years old when the album was released, but the covers make them seem like they were released decades earlier. Each moldy mid-’00s hit is remade to sound softer, slower, weaker, and more watery than the source material. It’s like hearing the Saturday Night Fever soundtrack rerecorded in 1980 by Air Supply.

Musically, Covering Our Tracks is by far the least essential of the O.C. soundtrack albums. But historically, it might be the most illustrative. It reflects on the show’s past and offers a reflection of the indie-rock present it helped to shape. While The O.C.‘s indie star-marking reputation wasn’t complete bs — the show truly did make the public care about Rooney for a minute — its primary achievement is broader and more dubious than its short-lived status as a kingmaker. By virtue of the groups it favored and conflated with the lifestyles of its characters, The O.C. made indie rock synonymous with terms like “unthreatening,” “callow,” “privileged,” and “blindingly white.” The O.C. ended six years ago, and yet this image of indie remains indelible.

Last month, I spent a few hours at the Pitchfork Music Festival in Chicago. I happened to show up on the Seth-iest day of the fest: Belle and Sebastian was the headliner, and the lineup was dotted with plucky guitar bands like Parquet Courts and the comically neurotic punk outfit Pissed Jeans. Maybe it was my mood — I was up very late the night before — but the music made me feel alienated from my tattooed and well-accessorized compatriots, and I ended up bailing early. The biggest crowds at Pitchfork also waited it out until Sunday, which might’ve been the most diverse day in the festival’s history. Much of Sunday’s entertainment could only be called indie rock by proxy — R. Kelly was the marquee act, and M.I.A., Sky Ferreira, El-P, and Killer Mike were some of the day’s most talked-about performers. Yo La Tengo also played, but it was quietly dismissed after a midday set. Rap, R&B, and dance overshadowed most of the rock music on this day.

Some people still talk about indie rock as it existed on The O.C. — as an edgeless, flavorless blob of mass-produced and easily disparaged mayonnaise. In reality, indie rock in 2013 is virtually impossible to define. Some of it is great, much of it is terrible, and most of it inspires no thought or emotion at all. But nothing can be truly considered “the middle.” As an adjective (or epithet) that was applied to certain rock bands a decade or so ago, that’s what The O.C. once was: a mushy center that everyone recognized and either accepted or rebelled against, even those of us who knew nothing about Seth Cohen beyond his taste in bands.