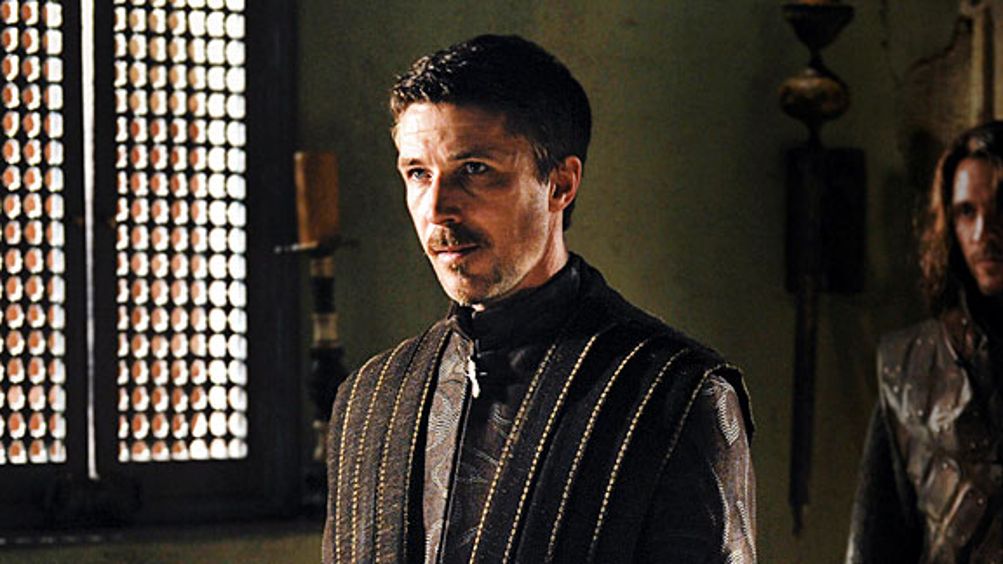 From the moment Aidan Gillen made his debut on Game of Thrones as kingdom treasurer Petyr “Littlefinger” Baelish, viewers had reasons to be suspicious. Sure, he swore fealty to our man Ned Stark and spoke modestly (“We are the lords of the small matters here”) of his own role in the Grand Guignol political drama that is Westeros, a cesspool of backstabbing — and front-stabbing — that would make Lyndon Johnson weep like John Boehner. Baelish’s mouth promised loyal assistance, but there was a glint in his eye, a weaselly vibe about him we just couldn’t shake. Was it the flowing robes (call it Obi-Wan chic)? The disturbing tendency to deliver soliloquies while stage-managing live sex shows? Or the fact that Littlefinger — Littlefinger! — harbored a lifelong crush on Ned’s wife? No, it was something else that left us unsurprised when Baelish’s deception was revealed with a dagger held to Ned’s throat: recognition. The last time we saw Aiden Gillen had also been on a Sunday night on HBO, when he was also playing a morally slippery politico who had trouble keeping his littlefinger in his pants and the truth in his words: Tommy Carcetti, the ambitious, duplicitous would-be Mayor of Baltimore from The Wire. 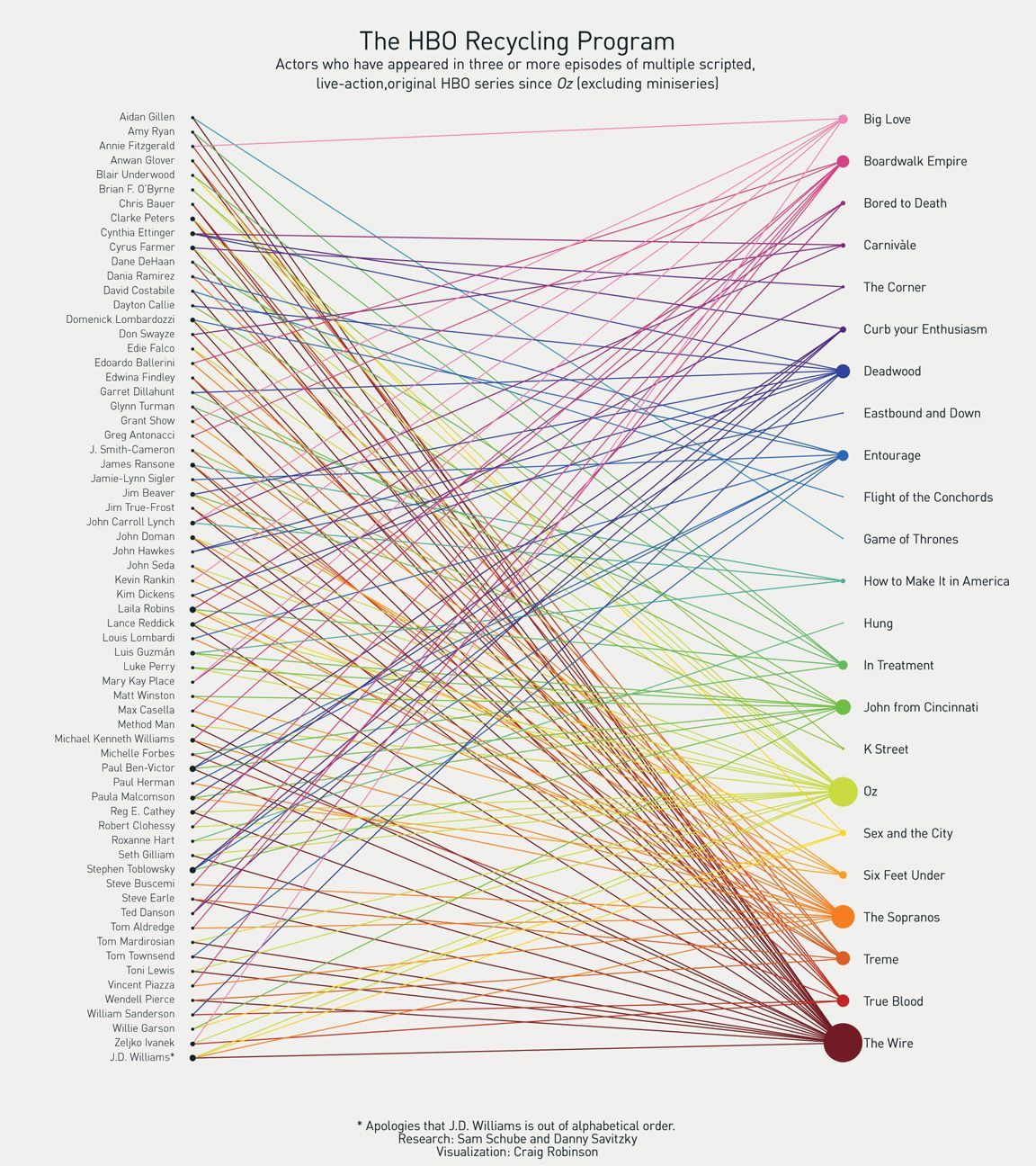 This is anything but coincidental. Carcetti to Littlefinger is just one of the many winking, cross-show transitions HBO has pulled off in recent years, as it uses and reuses its substantial repertory company of memorable — but not too memorable — character actors. This recycling has created a golden bronze age for underrecognized performers, but it’s also affected the way we watch their shows. Before The Wire, Michael K. Williams was an underemployed dancer with a dramatic facial scar and a comatose career. Now, he’s Omar. Scratch that: Forever, he’s Omar. Even when he’s Chalky White on Boardwalk Empire, he’s Omar. And that’s the point. It’s an easy shorthand, not only for the audience — hey, we know this guy! — but also for the producers: Aspirational casting helps indicate, and potentially establish, just what a new show would like to become. Even though viewers were given only the briefest of glimpses of Chalky in Boardwalk‘s series premiere, we felt comfortable assuming a number of details about the character, in particular that he was likely to be a charming, menacing badass. When Chalky impressively chalked choked the life out of a tiny man a few weeks later, those suspicions were confirmed. (What remains unknown as we head into Season 2 is if Chalky has a taste for Honey Nut Weetabix, or whatever cereal well-dressed people ate in the 1920s). What all this means for the actor, though, isn’t so clear: Thanks to the suits at Home Box Office, Williams is enjoying a nice run, but his chances at expanding his range or disappearing into a role are pretty much nil. In other words, it’s not TV stardom; it’s HBO.

Of course, HBO’s actor recycling program is nothing new — they’ve been doing it ever since Wembley Fraggle fathered Miranda’s baby on Sex and the City. (We could be a little off on details — it’s been awhile.) But it kicked into high gear with the rise of The Sopranos and the subsequent High-Quality Dramas (HQDs) that helped define both the network and the decade. The poster child for the phenomenon may well be J.D. Williams, who, by our count, has appeared in no fewer than four HBO programs, playing some version of the Chatty Criminal with a Chip on his Shoulder: Kenny on Oz, Special K on The Sopranos, and, most almost-famously, Bodie on The Wire. (He also played someone named “Sweet Sauce” on SATC, but as we said, our memories of that show are a little hazy.)

Sometimes first appearances serve as tryouts for later success — take Edie Falco’s turn as a morally challenged prison guard on Oz leading directly to her Emmy-winning portrayal of morally challenged, trying-to-stay-out-of-prison mob wife Carmela Soprano. Other times, it’s allowed individual cottage industries to emerge, such as James Ransone with his Meditations on the High-Strung Dirtball (The Wire, Generation Kill, Treme), or Domenick Lombardozzi and his multiple incarnations as the Worryingly Likeable Mook (Oz, The Wire, Entourage). Max Casella would have been a Doogie Howser-related footnote to Neal Patrick Harris’ career if it weren’t for HBO’s offer of a generous recurring gig as a Mouthy Mob Underling (The Sopranos, Boardwalk Empire). And there are a number of likeable “that guy” (or “that girl”) actors who have been given repeated opportunities to showcase their best characteristic, be it brassy (Kim Dickens: Deadwood, Treme), bewildered (John Hawkes: Deadwood, Eastbound & Down), or bald (Willie Garson: Sex and the City, John From Cincinnati).

A working actor is a happy actor, of course, and all of this can lead to a certain kind of near-fame, an NPR-ish level of quasi celebrity that can get you mobbed on Hudson Street or a guest spot on Parenthood. (Honestly, were we happy to see Larry Gilliard Jr. playing what was essentially a reincarnated, sportier version of D’Angelo Barksdale on Friday Night Lights last year? Yes. Yes we were!) There is a downside to this steady employment, though, a sort of audience shorthand that goes deeper than typecasting. It’s not only that Paul Ben-Victor is limited to roles as an Inscrutable Power Broker (The Wire, Entourage, John From Cincinnati, Curb Your Enthusiasm) — it’s that we, the audience, will probably never accept him as anything else. There’s a reason why no HBO mainstay has gone on to greater stardom — those who have escaped the system were either stars when they entered (Sarah Jessica Parker) or they left before accepting that critical second, similar role (Idris Elba, J.K. Simmons). Even poor James Gandolfini (“poor” = fantastically, wildly, insanely rich, but still) recently returned to the scene of his many fictional crimes to play Craig Gilbert, the intensely egomaniacal head of a much-loathed organization: reality TV.

Call it Premium Cable Purgatory or call it an opportunity (the background goombahs who used to fill the frame at Satriale’s pork store on The Sopranos certainly did when Boardwalk Empire came on the air), but the HBO effect is real. Could you imagine Andre Royo as a villain? Or Wendell Pierce as an uncharming slob? Or Kim Cattrall with her shirt on? Of course you couldn’t. Our advice? Embrace it. Later this year HBO will premiere Luck, a high-profile show about horse racing and the money-losing lowlifes who populate the track. There are big names behind the camera (Michael Mann, David Milch) and in front of it (Dustin Hoffman, Nick Nolte), which can mean only one thing for the rest of the cast: John Ventimiglia, call your agent!