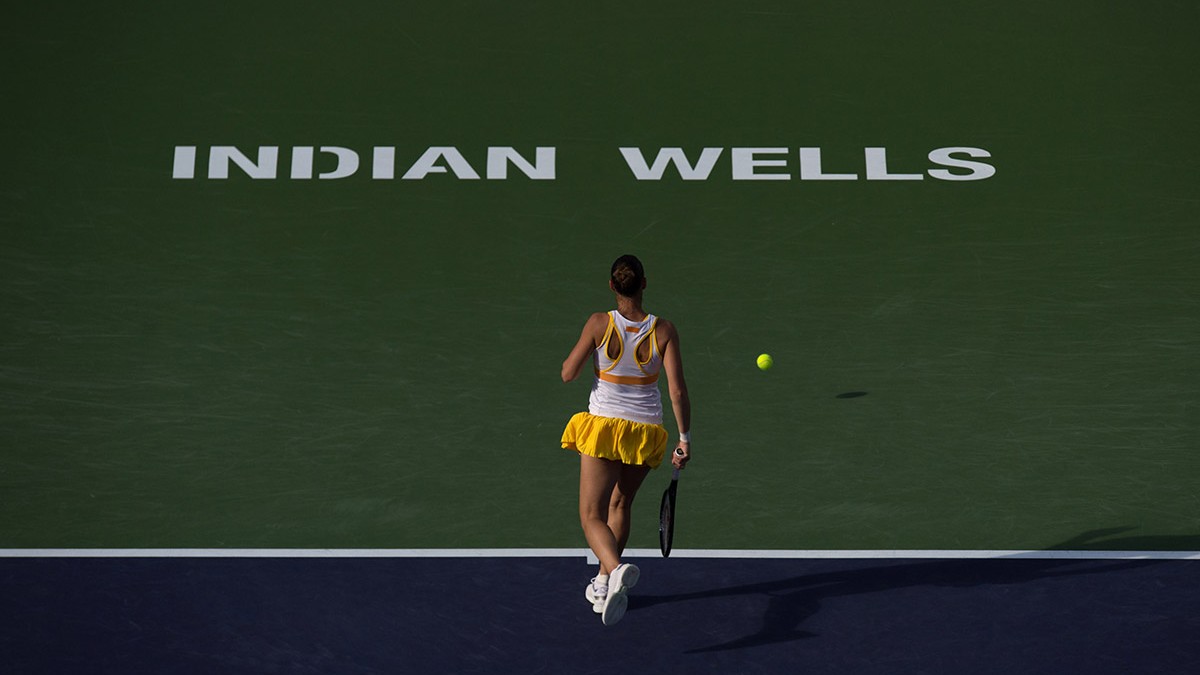 Unofficially, it’s called the fifth slam. Officially, it’s called the BNP Paribas Open. Informally, it’s called Indian Wells. If you don’t get the Tennis Channel, you might not even know it exists. But it’s happening right now, out there in the desert of the Coachella Valley, and it is beautiful to look at. Indian Wells is a jewel box. It is perfect. Large but intimate stadiums, framed by the curve of distant mountains. Free Wi-Fi for the public — and free charging stations for phones. Brita filtered-water tents instead of fountain taps. Hawk-Eye for instant-replay challenges on every court. The new Stadium 2 — astonishingly, built in 10 months — has a Nobu restaurant, with a $100 minimum for a seat. This tournament is tennis as it’s often parodied — tennis for billionaires! As, in fact, this is. Tournament owner Larry Ellison, the CEO and founder of Oracle, sits at no. 5 on the Forbes list of the world’s billionaires.

As for the tennis itself? It wouldn’t earn the top players a table at Nobu. Rafa Nadal lost to Alexandr Dolgopolov in a third-set tiebreak, hitting groundstrokes that didn’t even reach the top of the net. “I played bad,” Nadal said after the loss. “That’s all.” He had company. Andy Murray barely beat Jiri Vesely, 7-6(2), 4-6, 6-4, despite Vesely’s botching four overheads. (Imagine an NBA player trying to dunk and getting rejected by the rim — four times.) Then Murray played terribly in a loss to Milos Raonic. “I didn’t make enough balls, missed easy shots,” Murray said. “But really easy shots.” Maria Sharapova hit 58 errors while losing to no. 79 Camila Giorgi. A replay of the Australian Open women’s final between Li Na and Dominika Cibulkova produced 110 errors. The match that followed, between Sloane Stephens and Flavia Pennetta, produced 112. On an injured foot, Victoria Azarenka lost in the second round to no. 66 Lauren Davis, in a match that, it seems, Azarenka shouldn’t have tried to play. Tomas Berdych lost in the second round, saying afterward, “Anything I touched today was basically bad and was wrong.” I could go on.

In some ways, tennis has never been in a better place than it is right here, in the desert. It’s stunning — the fancy upgrades, prize money increases, marketable players, imported sashimi, scrolls of clouds unfurling across the long desert sky. Still, the sport is a little unsettled. We’re transitioning from an era of stability on the men’s side (four men have won all but two majors since 2005) and reliable instability on the women’s (seven different women won majors in 2011 and 2012 alone) to … who knows?

A little news item last week, though, provoked another anxiety, a deeper one, which surfaces from time to time: Is the sport fair? One of the weirder stories of 2014 so far came to an end when Australian police dropped a charge against Daniel Dobson, a 22-year-old employee of Sporting Data Ltd., based in the U.K. Dobson had been arrested during the Australian Open when officials noticed he had an electronic device, linked to his smartphone, stitched inside his pants. The device was said to allow him to transmit scores back to Sporting Data faster than official transmissions — a practice known as “courtsiding.” Since bettors exploit small changes in odds from moment to moment, the fastest information is valuable. Those who bet on tennis contend that the information could not have been abused, since most betting establishments put a brief break or delay on bets to discourage foul play. The bigger issue at hand, as a piece in PandoDaily nicely argued, was whether live scoring data is proprietary information. (Fast data transmission is already done aboveboard — for a fee. Enetpulse, which transmits scores of ATP and WTA matches directly from the umpire’s chair, markets itself as the “exclusive official data service designed for bookmakers.”)

What interested me about the Dobson case wasn’t that the arrest happened or that the charges were dropped. It was the paranoia the police expressed. “Courtsiding is really only one step away from then contacting players and getting engaged in more illicit and sinister types of sports corruption,” Graham Ashton, a deputy commissioner with the Victoria police, said at a news conference. Only one step?

Gambling on tennis is huge, at least outside the United States. According to a 2007 report, tennis is the third-most wagered-upon sport on Betfair, the world’s largest online betting exchange, and according to the New York Times, volume has only increased since then. The appeal of tennis to gamblers makes total sense. Tennis is played one-on-one. It’s broken into discrete points, games, sets, matches, and tournaments. There are a jillion statistics available describing specific scenarios: ad-court aces, second-serve return points won. The odds are constantly shifting, game to game, point to point; and bettors can make wagers during play itself. Plus, tennis is played everywhere, all the time. There are tens of thousands of professional matches, hundreds of thousands of games, millions of points, and patterns in the chaos. Alex Duff of Bloomberg Businessweek told the story of a quant who claims to bet millions of dollars on tennis using an algorithm. He couldn’t care less about the game itself, Duff wrote, “watching less than an hour each year.” Sometimes small matches make for the most attractive bets. During Australian Open qualifying, the Herald Sun reported a AUS$50,000 wager on no. 158 Anastasia Rodionova to beat no. 111 Coco Vandeweghe — for a AUS$90,000 return. The bet looked “certain to draw the attention of the tennis anti-corruption unit,” the Herald Sun story began — before adding, “The Herald Sun is not suggesting illegal activity on anyone’s behalf.”

How much cheating is there in tennis? I have no idea. Like a lot of people, I sometimes abstractly assume that the sport I love is screwed. Of course players are doping. Matches are fixed. Officials are bribed. There are cover-ups. What’s my evidence? I have none. When I’m not thinking about players individually, it just seems like common sense to assume the worst. People need money and want more. They make excuses. They think they won’t be caught. And they probably won’t be. Who’s to say Player X is moving the odds by tanking for three games? Who’s to say she’s not just having a really rotten day? The fear is that any corruption at all will taint all competition. If you can’t trust the fairness of one match, you can’t trust any. This isn’t a problem only for tennis; it’s a problem for sports.

The lack of transparency in tennis’s investigations hasn’t helped. It’s true for doping as well. It’s been gratifying to watch Marin Cilic rain aces down on Indian Wells after serving a four-month doping suspension for taking a glucose tablet — a violation everyone (including the Court of Arbitration) seems to agree was an honest mistake. But the governing body did him, and itself, no favors when it allowed him to claim a knee injury instead of a failed doping test when he withdrew from tournaments while the case was pending. It makes you wonder what else you don’t know.

Cheating does happen. Four players have been suspended and fined since last June for betting violations, all from the low ranks. There’s some recklessly unsourced whispering that higher-ranked players are protected while those no one cares about are thrown under the bus. And there was Sopot, Poland.

The spectators in the stands at the Orange Prokom Open in Sopot on August 2, 2007, saw nothing strange. The baseline was 36 feet long. The doubles alleys were 4 feet 6 inches wide. It was a Thursday like any Thursday, a second-round match like any other. On the court were Nikolay Davydenko, a small, wiry Russian, and Martin Vassallo Arguello, a lanky player from Argentina. Davydenko came into the match as the fourth-ranked player on the tour and the tournament’s defending champion. Vassallo Arguello was ranked 87th and had never won an ATP singles title. Daydenko won the first set, 6-2, as expected.

Some of those watching the match far away, though, were seeing something really strange. An hour before play began, the money began to move. Vassallo Arguello, ranked 83 places below Davydenko, became the favorite. And after Vassallo Arguello lost the first set, bets on him continued to pour in. More than $7 million was wagered — and according to an ESPN Outside the Lines report, more than $1.1 million was risked on Vassallo Arguello by three Russia-based accounts alone. And so, when Davydenko retired with a foot injury in the third set, managers at Betfair voided all wagers on the match. It was the first time in its history Betfair had taken that step.

A year later, an inquiry absolved Davydenko of any wrongdoing. But an “Environmental Review of Integrity in Professional Tennis” carried out by Ben Gunn and Jeff Rees, former London police officers who have studied sports corruption, in May 2008 concluded that “tennis is vulnerable to corrupt betting practices.” The word “vulnerable” appears in the report 15 times. “A large majority of current and former players we interviewed claimed to ‘know of’ approaches to players being invited to ‘throw matches’ presumably for corrupt betting purposes,” the authors wrote. “Only one player admitted being directly approached several years ago.” What is more, the review identifies 45 matches over five years where there were “specific concerns about each match from a betting perspective which would warrant further review.”

That sounds bad. It is bad. But here’s the thing — 45 suspicious matches in five years? According to Enetpulse, there were 19,000 ATP and WTA matches in 2010 alone. Forty-five matches is a tiny percentage of the number played over the period evaluated by Gunn and Rees. It’s a tiny percent of 1 percent. It’s not nothing, but it’s closer to nothing than I thought it would be. Of course there’s cheating, I tend to think, because don’t people cheat? But the answer is, most people actually don’t.

If tennis actually is “vulnerable,” it’s because the sport really isn’t fair. The total prize money for the BNP Paribas Open at Indian Wells is $5,030,402. The total purse for the Kazan Challenger, in Russia, which is also being played this week, is $75,000. At Futures Tournaments, it can be $10,000. That number is split among all entrants; the winner takes a few hundred dollars. (The total prize money for the Australian Open was $33 million.) Professional players sometimes struggle to pay for dinner, let alone coaches and plane tickets. It’s not only the lowest-ranked players who are “vulnerable,” though. There’s a big difference between being ranked 75 and 5, and between being 5 and being no. 1. Of course, the players aren’t the only ones who stand to benefit from sharing a little useful information. There are coaches, trainers, hitting partners, cousins, doctors, linesmen, linesmen’s cousins. There are haves and have-nots. This is also true in life. Just look at Forbes’s list of billionaires.

The tennis at Indian Wells hasn’t been pretty. There have been upsets galore. A few people probably have made a lot of money on well-placed wagers. Tennis is vulnerable because humans are vulnerable, and there is money at stake. After the Sopot scandal, players spoke openly about the potential for corruption in the sport. You don’t hear about it as much anymore, except when someone suggests that there’s one step between Sporting Data’s Daniel Dobson and the abyss. I tend to think that paranoia is just blown smoke. But who would bet on it?