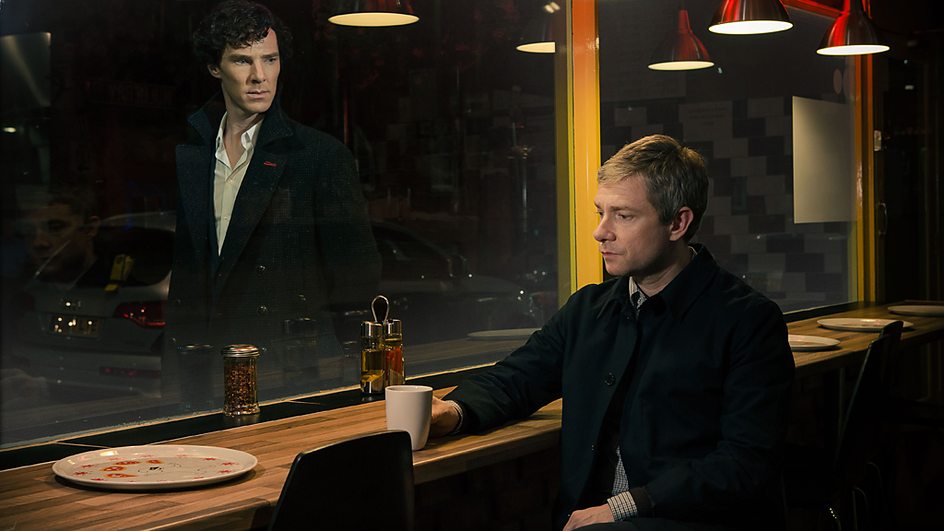 Sherlock Holmes belongs to all of us. I mean that quite literally: Last month a federal judge declared that all of Sir Arthur Conan Doyle’s work published before 19231 resides in the public domain, not, as previously thought, at 221B Baker Street. But I also mean it in a larger, more figurative sense: Holmes, along with his stalwart sidekick, John Watson, is an essential part of our modern storytelling mythology. In 2014, with two television shows on the air and a blockbuster franchise at the movies, their appeal has never been higher. The reasons for this aren’t all that complicated — some of them might even have something to do with that whole “public domain” thing. But I think it’s mostly to do with Sherlock himself. Unlike, say, Green Lantern, Sherlock is the rare superhero with a power that makes total sense in the real world, one far more useful on a day-to-day basis than heat vision or a giant, Norwegian hammer: He observes everything and misses nothing. For a culture plagued by FOMO, Sherlock’s omniscience is both antidote and inspiration. An hour in his chilly presence suggests that the answers to all of life’s mysteries, frustrations, and unsolved serial murders are sprinkled all around us, as tactile as crumbs on a tablecloth. The trick is simply knowing when, where, and how closely to look. Apologies to HBO, but there really is only one True Detective.

While we’re at it, apologies are also owed to Robert Downey Jr. and Elementary’s Jonny Lee Miller, because there’s also only one true contemporary incarnation of Sherlock Holmes. Benedict Cumberbatch, the ascendant English actor whose face looks like cut glass and whose name sounds like a belligerent hedgehog, dons the famous trench coat like a second skin in Sherlock, the cracking BBC series that returns for a third season on PBS’s Masterpiece Mystery  this Sunday night. He combines the arch braininess of Basil Rathbone with the sleek efficiency of iOS7. He’s the hard drive that needs no backup, the keyboard that pushes back.

You might think I’m being glib by comparing a performance to a computer, but there’s more than a little Theodore Twombly in each of us now. The genius of Cumberbatch — and of this Sherlock overall — is in taking an immaculate premise and upgrading rather than rebooting it. Each 90-minute episode takes one of Conan Doyle’s original stories and cleverly strip-mines it for parts: “A Study in Scarlet” becomes “A Study in Pink”; “The Hounds of Baskerville” is about chemical weapons, not spooky hallucinations. Other tweaks are more natural. Martin Freeman’s Watson (now, as ever, a veteran of a messy Afghan war) is a blogger instead of a biographer; Rupert Graves’s Detective Inspector Lestrade now goes by “Greg.” (Though Sherlock, ever the people person, occasionally calls him “Graham.”) London is once again the most exciting city in the world because, thanks to immigration and the Internet, it is the world, a place where tweets and texts drop visibly from the soggy sky like raindrops.

And while all iterations of Sherlock live or die on the relationship between Holmes and Watson — they’re the original template for the mismatched buddy comedy; one all brain, the other all heart — this particular Sherlock soars on the back of it. Sure, it can be viewed as a surprisingly nuanced exploration of male friendship, but when one half of that friendship is the peerless Freeman, just about everything is nuanced. Instead, I think of it more as a touching commentary on modern man’s relationship with his true soul mate: his cell phone. Watson could never rid himself of Sherlock: He’s too resourceful, he makes the world too much fun. The roaming alone makes the constant auto-correcting more than worth it.

It’s been exactly two years since the last original episode of Sherlock aired, which is an awfully long time to hang from any cliff, particularly one as treacherous as where the series left off. In the final episode of Season 2, “The Reichenbach Fall,” co-adapters Steven Moffat2 and Mark Gatiss (who does double duty onscreen as Mycroft Holmes) dispatched Moriarty, Sherlock’s greatest adversary, and then Sherlock himself. As a horrified Watson looked on, Holmes threw himself off of a building to save the people he holds most dear. Or so it seemed, anyway. The final moments of the episode saw Watson grieving graveside while a familiar figure in a deerstalker hat watched the scene at a distance.

The long hiatus was a product of Sherlock’s outsize success. The show is a ratings behemoth in the U.K., and it has made bankable stars out of its two leads. Freeman was already known for his work as Tim on the original Office but is now a global, if barefoot, phenomenon thanks to his starring role in the endless Hobbit trilogy. And Cumberbatch is currently one of the hottest — and funniest! — names in Hollywood, lending his baritone gravitas to Oscar bait (12 Years a Slave, August: Osage County) and popcorn flicks (Star Trek Into Darkness) alike. If online rumors are to be believed — and really, when are they not? — he’s also in the running for a major role in the upcoming Star Wars sequels, though not, I fear, in my preferred role as a posh block of carbonite.

But it’s Sherlock  that has defined Cumberbatch — and inspired a devoted female fan base who have, perhaps unwisely, dubbed themselves “Cumberbitches” — and it’s Sherlock  to which he inevitably and happily returns. (It’s a tribute both to his own career savvy and to the English television model, with its flexible scheduling and limited-run seasons, that he does.) And thankfully, “The Empty Hearse” is worth both his time and ours. It’s an incredibly busy hour and a half, crammed with so much necessary business (Sherlock must be plausibly resurrected, he and Watson must be satisfactorily reunited, Mrs. Hudson must successfully put the kettle on) it’s a wonder there’s room for a new case at all. And yet Gatiss, who wrote the episode, makes it look easy. His script positively waltzes3 as it travels from Serbian gulags to the underground tunnels of the London Tube, from the bottom of a Guy Fawkes Day bonfire to the basement of Parliament — a building that Natalie Portman fans might just remember as Guy Fawkes’s intended target.

Still, as is often the case with Sherlock, the best bits are less about plot and more about people. Gatiss has written himself a corker of a scene, a ping-pong match of high-functioning resentment between the Holmes brothers. Cumberbatch is as good as ever, deducing an entire life story from nothing but a floppy winter hat. (Next week’s episode amps Sherlock’s intuition up to 11: He identifies adulterers from their iPhone cases and the impotent from their boots.) And Freeman has never been better than he is in the opening minutes, expertly plumbing the bottomless grief of a deeply reserved man. Instead of processing his loss in a meaningful way, his Watson has embraced only superficial change in the form of an ill-advised mustache and a headlong love affair with the plucky Mary Morstan (played by Freeman’s real-life partner, Amanda Abbington). The series of scenes in which Sherlock reveals himself to his incredulous best friend (and disrupts a wedding proposal in the process) is a particular delight, a hilarious, slow-boiling farce of missed signals and split lips. Thanks to Cumberbatch’s peerless deadpan, the only thing more fearsome than Holmes’s intellect is his smile.

If Sherlock is guilty of anything this season it’s an increasing tendency toward fan service. The three episodes4 are built around big bombs, a big wedding, and an even bigger twist, but are further larded with a worrying number of winks, kisses, and callbacks that seem expressly designed to set a million Anglophile hearts fluttering. The breakneck pace that kept past seasons galloping forward seems to have been diverted inward, resulting in more opportunities for Sherlock to be clever rather than smart: Here he is dodging an invitation to see Les Mis, there he goes cross-examining potential groomsmen like a prosecutor working a capital case. But for the most part, all of this frippery is enjoyable rather than aggravating, because, despite its lofty intellect and sky-high stakes, Sherlock refuses to look down on that most primal of emotions: pleasure.

In that, Sherlock makes for a welcome break from the majority of its moody, American cousins. After weeks spent watching and writing about series that mistake darkness for enlightenment and trauma for truth, it’s refreshing to lose myself for a spell in Sherlock’s bright, bubbling London. In fact, the lightness of tone only adds to the drama: Where’s the suspense in a ride that only ever drops straight down? There’s something uniquely exhilarating about watching an unapologetically smart show made by unapologetically smart people. Holmes, like Moffat and Gatiss in their scripts, runs toward challenges, not away from them; where others see problems, he sees only puzzles worthy of being solved. Sherlock  treats intelligence not as a crushing burden but as a tremendously exciting gift. It dares to suggest that risk is merely a necessary byproduct of discovery and danger a rare but treatable side effect. Connected by screens and crowded with hashtags, the noisy, thrilling world Sherlock inhabits and illuminates is no different from our own. It’s up to us to pay closer attention.