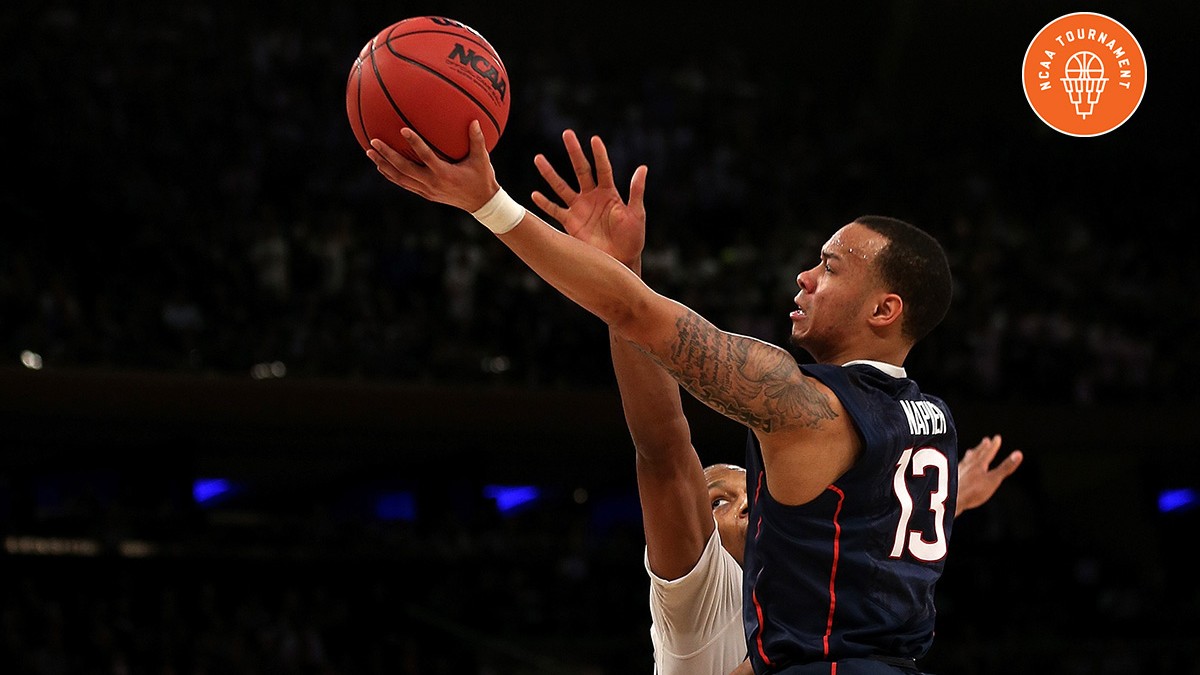 Shabazz Napier can sense a shift or force it, can slip through an opening or slice it, can weave a scheme or unweave it, can find free space or create it, can kick the ball out or drive it, can float a pass or fling it, can fake a jumper or drain it, can quicken his step or slam it. By now everyone knows what he can do. But the special thing about an athlete like Napier is that he’ll do what you know he can do, what you expect him to do, and it will still seem surprising and new.

It took a little time, a little patience — perhaps a little experience — and a little help. After a breakneck start for UConn on Sunday afternoon, Michigan State had slowed the pace, increased the banging-body pressure. The Spartans ended the first half and started the second on a steady surge, stretching their lead to nine. Napier, though, was calm, and so were the others. Even down, there were some encouraging signs for UConn. The Huskies were keeping the ball out of the paint; Adreian Payne was sending up 3s instead of muscling the ball inside; Branden Dawson and Keith Appling were almost absent; Michigan State had turned the ball over eight times in the first half alone. The Spartans had played an exhausting game against a suffocating Virginia late Friday night, and it showed. Despite having the potential to overmatch UConn’s smaller players, Michigan State finished the game with only six offensive rebounds. Dawson, who had 24 points and 10 rebounds against Virginia, shot just 1-3 and turned the ball over three times as Connecticut’s players collapsed on him. The Spartans’ guards combined for 11 turnovers — some of them baffling. Even while ahead, the talented team that had seemed to come together in the past month, after struggling with injuries all year, appeared to be a little out of sync.

“When Coach looks at me a certain way, I just know I got to be more aggressive,” Napier said afterward. Three and a half minutes into the second half, Napier hit a 3, which started a 12-0 run.

Napier scored 17 of his 25 points in the second half. When Michigan State closed the lead to two with 2:38 remaining, he hit a long, soaring jump shot off a screen from DeAndre Daniels. When the Spartans came within two again, with 31 seconds remaining, Napier stood high above the arc and shot an air ball — but jackknifed his body as he did it, kicking out and reaching forward. Appling’s contesting hand brushed, barely, Napier’s wrist. It was Appling’s fifth foul. Napier went to the line and hit his three shots. Game over.

Nine of his 17 second-half points came from free throws.

During the second half last night, Appling was continually wrong-footed by Napier, continually surprised. But who wasn’t surprised by Napier at times? “I remember this one time he just pulled up, maybe four minutes in — I’m running back on defense, and I’m like, ‘Oh my god, oh my god, how did he make that shot?’” said forward Niels Giffey, who’s played with Napier for four years, in the locker room.

Napier is 6-foot-1 and 180 pounds, and he has the soft cheeks and smile of a child. He’s not like UConn’s other dervish of a guard, Ryan Boatright, who came into the locker room after a brilliant game against Iowa State in the Sweet 16, settled himself into his locker, leaned back, and licked his lips in playful satisfaction before speaking. Napier comes across as quiet, earnest, and encouraging; he talks to reporters in a kind tone, like he wants to please them. His style on the court can seem strangely, deceptively shy — whether he forces his shot or dazzles. He does not thunder around the rim. He hesitates and then exploits the hesitation. He floats his passes; he rides his dribble. He curves into his jumpers and scissor-kicks out of them. Sometimes, for a moment as he hangs there after releasing the ball, he looks like he might fall. He never falls.

Napier doesn’t have the highest ceiling, the brightest prospects, the most potential for clichés. He doesn’t easily fit a mold. To be sure, there are comparisons and precedents; read almost any story, and you might think Napier’s middle name is Kemba Walker. But the joy of watching Napier is the joy of watching joy, which is always original. It is in the quickening dribble before the penetration; it is in the crossovers, the improvisation in a well-planned sport. His individual heroics are dazzling, and his reputation overshadows everyone else. But the joy is also in the way he swings and shares the ball. It can be like music. There are freewheeling duets with Boatright. There is the playful staccato of a pick-and-roll. When Daniels was hitting shots against Iowa State on Friday night, Napier deferred to him for a long, magnificent solo. And as Michigan State played an increasingly sloppy game, Napier kept his team in harmony. In the locker room afterward, Giffey marveled at Napier’s steady, calm confidence in his team this season. “I’m missing shot after shot after shot,” Giffey said, “and he still goes to me. He believes in me, probably more than I believe in myself.”

Even the fouls Napier drew were part of the music, rests as stoppages of time. The Spartans were a little slower, a little less agile, and a little more bruised, and so a little more prone to foul. But UConn was expert in provoking them. Shabazz is famous for this — he has a quick trigger and good fake, and he can control his body in the air, shooting in such a way that he turns what might be a clean contest from the defender into contact. Napier’s dynamic play produced fouls, and the fouls made it more possible to be more dynamic. In foul trouble, the biggest threats from Michigan State had to sub out, back off, and pay for their aggression. Napier had more space, more range, more chances to be in the right place, more chances to seem clutch.

The legend of Shabazz is that he has a taste for the moment. And he does. But from the free throw line, he was just automatic. So were his teammates, and it didn’t matter if the game was on the line. The way Connecticut practices free throws helps ensure the moment never seems what it is. Several times a practice, the team uses a drill it calls the Nash drill. (An assistant coach discovered it by watching Steve Nash do it on YouTube.) Players have one minute to hit 17 free throws or sprint. No time to think or breathe; just enough time to find the simplest rhythm to shoot. That basic skill, practiced into exhaustion, is why UConn is going to the Final Four.

Free throws are funny. They happen out of time; they’re unspectacular; they’re easy to forget. UConn is a quick, crafty team. What stands out is the penetration, the freewheeling movement, the speed. But the Huskies won their last two games in stasis. Connecticut went 20-for-22 from the line against Iowa State on Friday night, compared with Iowa State’s 6-for-15 — in a game decided by five points. Almost impossibly, UConn did better on Sunday, making 21 of 22 attempts, while Michigan State went 7-of-8.

Napier was 9-for-9 from the line, all in the second half. It is a pleasure to watch Shabazz Napier do what he does on the floor, commanding the court. But what surprised me most of all, in the end, was how much I appreciated watching him at the line — maybe even more than when the clock was running.

He’s known for the buzzer-beaters. But free throws might actually be the most Shabazz-y shots of all. They take intelligence, anticipation, toughness, sneakiness. They don’t just happen — he made them happen. And when he takes them, he’s operating in ghost time. He sneaks the scoreboard past the clock.