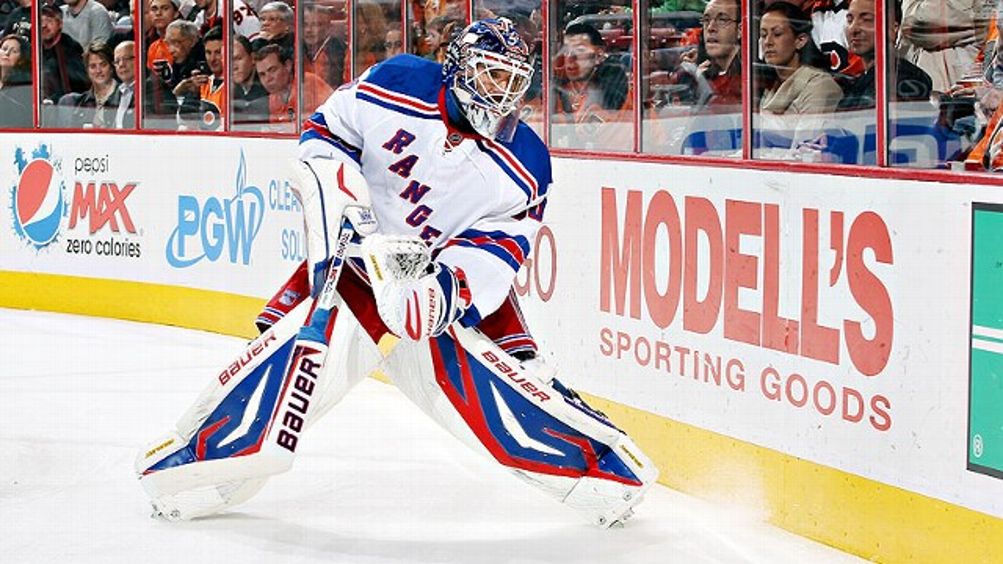 The NHL’s spring march toward the Stanley Cup is terrific to watch and terrifying to bet on. Having an on-form quarterback in football or an ace starting pitcher in baseball can be pretty valuable, but is any one single player more important to his team’s playoff chances than a hot goalie in hockey? And while we already have a good idea about what to expect from a starting quarterback or pitcher heading into the playoffs, predicting who that hot goalie will be is a dangerous game. Cam Ward famously attested to that, going from 21-year-old backup to Conn Smythe Trophy winner for the Hurricanes during their successful playoff run in 2006. Semyon Varlamov nearly pulled off a similar feat for the Capitals in 2009, starting 13 games in the playoffs after a mere five-game stretch during the regular season as a rookie. It’s hard enough figuring out who’s going to play, let alone who’s going to get hot.

That leads to a wonderfully random quality to the NHL playoffs, where it really does feel like any team is capable of winning any series against any opponent. Is that backed up by the numbers? In a small sample, yes. Since the league returned from their season-long lockout in 2005, the higher-seeded team has won 30 of 48 first-round matchups, or 62.5 percent. That’s far lower than the NBA, where the higher-seeded team has won 79.2 percent of the time over the same time frame. In fact, the NHL has been on a weird kick where the first-round results seem to alternate between hot and cold. When the league’s playoffs returned in 2006, only four of the eight higher-seeded teams advanced to the second round. The following year, six of eight teams advanced. Then it was four out of eight, and after that, six of eight. And then that cycle repeated a third time. So if you believe in biorhythms or merely in Bret Saberhagen, you might expect to see four lower-seeded teams upset their higher-rated brethren in the coming weeks.

At the hockey-friendly sportsbook at Caesars Palace, two of the league’s eight lower-seeded teams are actually favorites to win their opening-round series, and the team that is the betting market’s current favorite to win it all is actually a four-seed. The table below lists each playoff team’s odds to win their matchup in the first round, as well as their current listed price on winning the whole shebang and taking home Lord Stanley’s Cup.

The Penguins, of course, are no average 4-seed, and not just because they have Sidney Crosby back for the playoffs. They finished with the Eastern Conference’s second-highest point total, but because they were a lone point behind the conference-leading Rangers and play in the same division, they’re bumped to the fourth slot. It’s also worth noting that they have hockey’s second-best goal differential, producing a winning percentage of 61 percent once we plug their totals into the Pythagorean Expectation formula for hockey. Interestingly, though, neither the top-seeded Rangers nor the Presidents’ Trophy-winning Canucks have the league’s best goal differential; that belongs to the Boston Bruins.

Pittsburgh is also one of the four teams who have seen their payout for winning in the first round drop as bettors flock toward them at the many Caesars properties in Vegas. When the betting opened on these first-round lines several days ago, the Penguins were at -200. The top-seeded Canucks have also moved from -200 to -220, and the Devils have gone from -170 favorites as the sixth seed all the way to -200. The only underdog to take serious action has been the seventh-seeded Sharks, who started off at +165 and have gone all the way down to +130 over the past few days at the expense of the Blues, who are making just their second playoff appearance in the past seven years.

There is one man who actually might have all of this figured out: Todd Fuhrman, who supervises the operations of the Caesars Race and Sports Books from the flagship book at Caesars Palace. In addition to sharing tips and tricks with fans and bettors alike on his website and on Twitter, Todd is kind enough to indulge our many questions about approaching handicapping from both sides of the divide. And there’s a reason why we mentioned that Caesars was a hockey-friendly book: Fuhrman was a goalie in junior hockey and spent two years minding the net for Wesleyan. We asked Todd five questions about the Stanley Cup handicapping process, including where he’d set the lines on some action Vegas won’t take.

How difficult is it to handicap Stanley Cup futures when, every year, it seems like the outcome boils down to whoever finds a hot goalie? Is it the most difficult of the major American playoff systems for you guys to handle?

Fuhrman: Setting odds for each NHL series poses a stiffer challenge than any of the other major sports. As an oddsmaker, I can’t try and predict which goalie will channel his inner Jean-Sebastian Giguere and come up with an improbable run so you set prices based on a combination of public perception and true odds rather than speculation. However, handicapping goalies come playoff time is absolutely essential to be a successful bettor, so for those of us setting prices, we need to adjust on the fly based on what we see each game.

Hockey’s been long famous for masking the severity of playoff injuries. How do you guys parse the many upper- and lower-body injuries that seem to pop up during the playoffs in setting the lines every day? Since information is so valuable in setting accurate lines, isn’t the lack of detailed information on injuries frustrating?

Fuhrman: Trying to figure out NHL injury reports this time of year is like deciphering hieroglyphics on the Rosetta Stone: The only thing you’ll get from them is a headache. Starting goalies will impact lines more than any other player, so that’s where you worry about injuries. There will be minor adjustments made on the potential absence of stars but during this time of year everyone plays through major injuries unless they’re hospitalized.

Is there a team that the book would be very unhappy to see win?

Fuhrman: We’re in a very good spot as it pertains to our NHL futures right now, with the only mild exposure coming on the L.A. Kings to win the Western Conference. The best-case scenario would be the Senators or Panthers winning the Cup, but the reason we’re so strong there is because bettors don’t believe they can win it any more than I do. I think the short series prices in the opening round will attract some favorite action from the casual fan, but the fact you don’t have a favorite over -230 just goes to show that it’s wide open.

Does it pain you that you can’t offer odds on what color suit Don Cherry will be wearing during Hockey Night in Canada?

Fuhrman: When you’re talking about the best-dressed man in hockey, it’s always unfortunate you can’t include him in a specialty prop. I mean, let’s be honest: If I’m setting odds for him, the field would always warrant consideration because you don’t know the color of his pinstripes, plaids, or flowers on any given night. I watched plenty of Rock ‘Em Sock ‘Em Hockey on those old hockey roadtrips, but I can’t see Caesars letting me bust out the pink flower jacket, even if it’s to honor the best postseason in sports.

Vegas rules prevent books from offering odds on who the Conn Smythe Award (Playoff MVP) winner will be. (Vegas books are precluded from offering odds on events that have a winner or loser based on voting, like MVP races.) If Caesars could offer those odds, who would be the favorite and at what?

Fuhrman: It’s always fun to watch players emerge over the course of the postseason since that’s when players become stars. If I’m setting a board, here are the guys that I’d have at the top of my list. Keep in mind that since the lockout, you’ve had two goalies, three centers, and one defenseman win the distinction. The names you’ll see absent from the list of favorites are Jaroslav Halak and Brian Elliott, since the tandem would go off at about +1500 if we knew who the Blues planned to start. My deep sleeper for this year’s postseason surprise would be Kings up and coming netminder Jonathan Quick.

The Bovada offshore book lists Malkin and Crosby as the co-favorites for the Conn Smythe Award at a much more friendly +1100, with Lundqvist and each of the Sedin brothers just behind them at +1600. It also has a number of entertaining props worth your attention, of which we’ve highlighted three:

How many 5 through 8 seeds will advance past the first round in the 2012 NHL Playoff?
Over/Under: 3.5 teams

Again, do you believe in biorhythms or not?

How many games will go to overtime in the 2012 NHL Playoff?
Over/Under 17.5 games

Last year, the NHL playoffs saw a whopping 22 games go into overtime, but that was by far the second season’s highest total over the past five years. In the preceding four seasons, the playoffs produced an average of just 16.8 playoff games. In addition, 2011 also saw the playoffs produce more games of any kind (89) than at any point over the previous four years.

How many points will be scored by the point scoring leader in the 2012 NHL Playoff?
Over/Under: 29.5 points

Last year saw Bruins forward David Krejci pace all scorers with a total of just 23 points in 25 games, as the Bruins played three seven-game series en route to the Cup. Two years ago, Malkin put up an incredible 36 points in 24 games. What does this tell us? Basically, your bet here is a reflection on both which teams you think are going to end up in the final and what style of hockey those teams play.