Fighting the Margin of Error 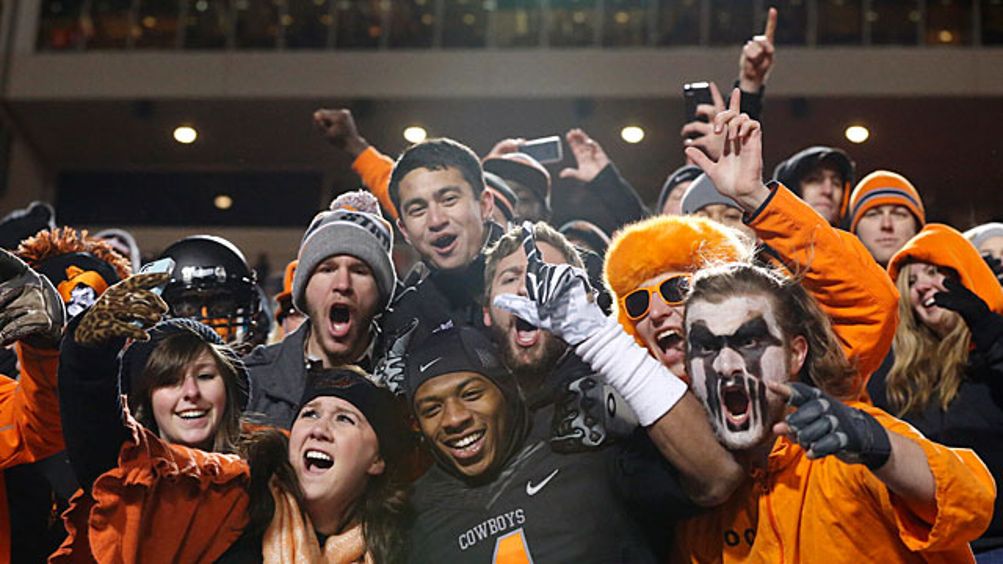 On Saturday, nestled in among the various conference championship games that populate this college-football weekend — The One With No Alabama, The One Where The Commentators Will Mention Sexual Assault Cursorily If At All, Your Periodic Reminder That Stanford Football Is Decent — Oklahoma will play Oklahoma State in Stillwater. It’s almost winter; the air should be in the low 20s at kickoff. College football’s annual march through the dwindling comforts of fall is nearly over. Now the leaves are dead and you can see your breath. There’s a moment every year when you realize that the emotional arc of the game’s season has turned along with the actual season. You’re someplace bleaker and sparer than where you started, someplace less fun and more serious. It takes a grim strength of spirit to get drunk outside when the temperature’s below 25° F. That’s what this weekend is about.

No. 6 Oklahoma State (10-1) can wrap up a Fiesta Bowl berth and a share of the Big 12 championship by beating no. 17 Oklahoma (9-2), which, as a lifelong Cowboys fan, I earnestly hope they will do. But because the Big 12 stores its title game where it keeps its identity and clear reason to exist (it has none of these things; instead it has Texas), the stakes feel kind of small compared to the weekend’s other matchups. The Sooners own a lifetime record of something like 1,143-7 against their in-state rivals, but here they can only play spoiler. If they pull off the upset, the outright conference title and attendant bowl placement will go to the winner of the Texas-Baylor game in Waco. It’s not a confusing end-of-year scenario as these things go, but it’s an if/then. It’s inherently a little tedious. It lacks the all-in-one clarity of a real title game. On top of which, it lacks national-championship implications, because Oklahoma State’s thousand-point loss to nine-billionth-ranked West Virginia back in September (I’m quoting these numbers from memory) left them gasping outside the mathematical biosphere where BCS glory takes place.

So I’m here to talk to you about a game that, in the rarefied context this word occupies in big-time American sports, doesn’t really mean that much. Yes, there’s a major bowl bid on the line, but quick, tell me who won the Fiesta Bowl in 2007.1 Yes, Oklahoma State can be a joy to watch — go refresh yourself at the well of quarterback Clint Chelf’s highlights during the Cowboys’ 49-17 caning of then-no. 4 Baylor in November — but they’re not in title contention, so who cares? Conference championships and top-five finishes and off-peak BCS slots are nice, but on the national level, in 2013, that stuff mostly belongs to the disorganized muddle beneath the stuff you really care about. It’s the dustpan AMC tacks on after The Walking Dead to sweep in ratings from the asleep and indifferent.2

Or I do, anyway, on years when my team isn’t part of this specific conversation. Which — considering that Oklahoma State has exactly one Big 12 title to its name since the Pangaea supercontinent first ripped apart 200 million years ago, thus marking the beginning of the SEC4 — is almost all the years there are.

And yet, you know what? People will flock to this. If you’ve been to a major college football game recently, you know what a total, transforming spectacle it is. On a normal weeknight, the stadium is a dull shell, easy to ignore. On game nights, it lights up. It’s as if the astral beetle that sometimes inhabits the husk has shimmered in from another plane. Day games, like this year’s Bedlam matchup, merely look as though an older, sparser civilization had been suddenly displaced by a mob of carnivorous nomads. Tents go up everywhere. The tents have their own generators. The generators run big-screen TVs. Smoke seethes upward from a thousand grills. Bags of meat floating in opaline marinade are handled like organ donations. Music pounds from somewhere, from everywhere. Professional loudmouths with microphones beckon you to try a 3-point shot and open a checking account with Allied Frontier Bank. In the crowd, you might encounter painted frat bros, shirtless endomorphs, cowboys with hats and lariats, moms, dads, little kids flinging mini footballs at each other, elderly couples complexly toting elaborate seat-cushion overlays, coeds wearing their boyfriends’ jerseys, boyfriends holding their girlfriends’ bags, popcorn eaters, hot dog eaters, rib eaters, pickpockets, scalpers, dudes wrestling in three feet of open space, drunks, boosters, boosters who are drunks, politicians, teenagers, babies, professors, fools.

All this will happen in Stillwater on Saturday. People who wouldn’t have been hospitalized will be hospitalized because of this game. People who wouldn’t have had sex will have sex because of this game. Someone will propose to someone because of it. People will get in fights, eat nachos, lose cell phones, make friends, get grounded, and open checking accounts, and the big commercial spectacle that is somehow more than a commercial spectacle will bash its gaudy happy brains out all over the December afternoon. It will be a memorable event in a lot of people’s lives.

What I’m getting at with these descriptive listicles is that there’s a tension between Our National Conversation, where a game like Oklahoma–Oklahoma State is an afterthought, and the way football is actually experienced by the people who choose to get close to it. That’s an obvious thing to say, I guess. The national conversation is inevitably going to be a distillation of local particulars, to involve filtering local particulars into the most broadly appealing narrative. So it’s no surprise that some things matter in Stillwater but don’t mean a thing to SportsCenter. That just means that fans like to watch their own team even if it’s not contending for a championship. Which, #sports.

I’ve been thinking about this for a couple of days, though, about the overall indifference to a semi-important game I happen to care about. I think it’s good, every now and again, to remember what’s really going on in the muddle below the national conversation. We complain about the tyranny of the narrative all the time, or at least I do. But I don’t spend a lot of time imagining what might exist in its place.5 It’s useful to think about that, in the same way that a game you’re watching on TV can seem different, and more interesting, if you mute the commentary for a few minutes.

Since we’re talking about college football, think about the old bowl system. Now, the bowl system has almost nothing going for it. It concentrates power in the hands of a mob of ancient pastel golfing cronies, it does a terrible job selecting a champion (even in the era of the BCS), it milks every dollar it can out of college football’s profile as a national sport while pretending it’s a regional sport for organizational purposes. But it does at least point back to the idea that a sport is a network of local circumstances, that the nodes on this network might only be vaguely affiliated, and that the story of a season doesn’t have to be the same story for everyone.

Imagine a league structure that’s looser rather than tighter — one that exists from the bottom up, rather than as an emanation of a generalized TV presence. A school founds a football team. Every year it tries to schedule a certain number of opponents. It plays those opponents, and that’s it; that’s the season. It’s not about determining which immortal beheads all the others. There’s not one central narrative federally superseding each team. Each team has its own narrative. We beat the Panthers and lost to the Wildcats. We were as good at football as we were. We were successful or unsuccessful based on the games we played.

Because at some point that stopped being the case, didn’t it? Now, even without a real playoff system, major college football teams are successful if they win a championship and not successful if they don’t. You can have a pretty good year otherwise; you can exceed expectations. But on the national-conversation level, winning a conference title doesn’t really matter in itself. Winning the Fiesta Bowl doesn’t really matter in itself. They matter because winning a big game on national television helps with program status and media profile, which help with recruiting, which helps you (eventually) contend for a championship.6 The existence of the monolithic top-level narrative means that everything is constantly evaluated in terms of this long-game tactical play, which we’ve gotten used to thinking of as the only way football should operate.

But it’s not the only way a sport can operate. Back before the convergence of TV markets, college football was not so far from what I’m describing. Or take, say, European soccer, where most teams compete in multiple competitions, with different formats, every year; you celebrate winning that particular league or tournament, not one transcendent championship. In golf and tennis, there’s a clutter of arbitrarily defined bigger and smaller competitions, and the same person almost never wins all the biggest ones.

You sometimes hear the complaint about both Major League Baseball and the NBA that because the season is so long, the individual games don’t mean much. You have no reason to care whether the Dodgers/Clippers are better than the Diamondbacks/Suns on some arbitrary midseason night; you’re watching to see a granular change in a developing playoff race. But the MLB and NBA schedules are comprised of dozens and dozens of games. The fact that we assume, to some extent, the same remove with college football — which currently features a 12-game season — is slightly nuts. Isn’t it?

There’s probably no way to reverse out of national-conversation logic, of course. I’m not even sure I’d want to. Once TV exists, once the sport goes spiraling into the monocultural stratosphere, there’s no way not to care how Astonishing State would look against Kickass U.7 The kind of mind-set I’m describing here was probably outdated by about 1963. Nobody loves playoffs and championship games more than I do.8 Still, it would be — fascinating? Novel, at least? — to be able to watch Bedlam and think only about whether Trevor Knight can throw against Justin Gilbert, whether Josh Stewart will be fully recovered from his ankle injury, whether OSU’s defense can stop Brennan Clay, about intra-Oklahoma bragging rights, and not about how a win or a loss would tweak BCS decimals and some nebulous big-picture context.

The whole point of a championship is that it’s impossible to rate one too highly. On the other hand, what could be more overrated than a championship?