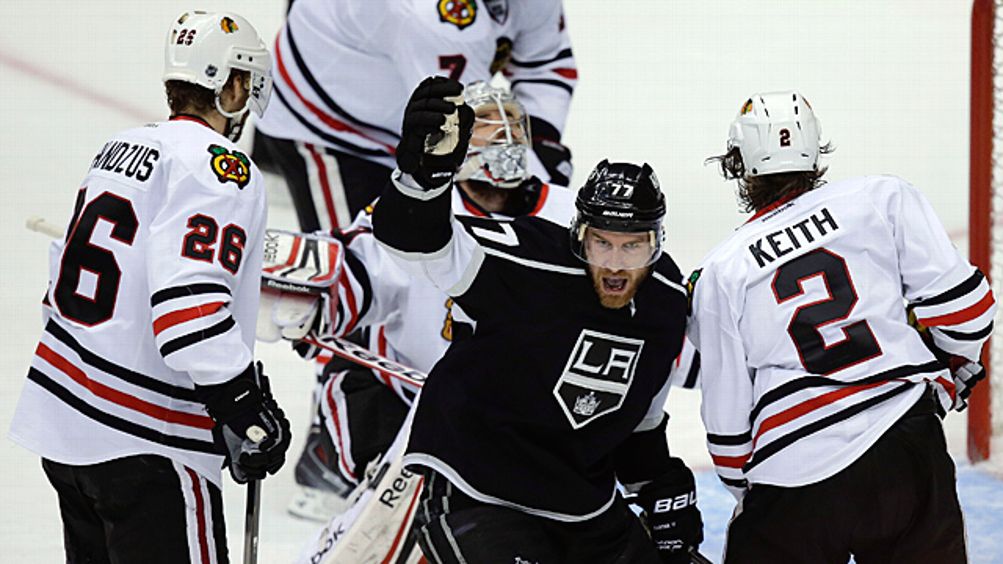 It started with a flubbed pass and ended with a broken stick. The goal that would wind up winning Game 3 of the Western Conference finals for the L.A. Kings wasn’t exactly a picture of perfection. But as the adage goes, they all count the same, and in its own way it was beautiful.

The Kings, who entered Tuesday night’s game down two games to the Blackhawks after falling Saturday and Sunday in Chicago — “Obviously it’s not do-or-die, but it is,” Justin Williams said beforehand — cut the Blackhawks’ series lead in half with the 3-1 victory at Staples Center. One of those three goals was a seamlessly-set-up beauty by Williams, another was an insurance empty-netter from Dwight King — and then there was the game winner, a testament if there ever was one to the combination of persistence and randomness that so often defines hockey.

The box score line read simply: Slava Voynov (Tyler Toffoli, Jeff Carter), which makes it all seem so straightforward. What it doesn’t say is that first Dustin Penner tried to hit a streaking and wide-open Toffoli and missed, so the puck sailed into the corner. It doesn’t mention that Toffoli, with Carter’s help, then won a couple of along-the-boards battles to regain possession. And it leaves out that when the puck finally squirted out to defenseman Voynov and he put it on net, his stick broke into pieces, making the shot off-pace and unpredictable. It fooled Chicago goalie Corey Crawford to give the Kings a 2-0 lead 6:37 into the second.

“Broken stick, puck just go too slow,” the 23-year-old Voynov later shrugged. “And lucky.” It was his fourth game winner of the playoffs, making Voynov the youngest defenseman since Bobby Orr to amass such a stat. He was asked what it meant to be so productive on a team that has struggled offensively, averaging just two goals a game.

“If you work hard enough, it’s amazing how much good luck you might get,” said Rob Scuderi, Voynov’s frequent partner on the blue line. “I thought we worked hard that shift. We had a couple chances, couple good looks, and then we end up getting a broken-stick goal, of all the shots we took.”

The Voynov-from-Toffoli-and-Carter goal compilation was, in its way, a fitting one for this L.A. Kings team. The three players — one a young Siberian defenseman, one a just-happy-to-be-here rookie, and one a star scorer with a lightly checkered past — are just the sort of unlikely trio that a team needs to succeed in the playoffs.

Sitting at his stall after the game, his face a hodgepodge of kinda reddish facial hair — on this taxonomy of beards, it probably comes closest to “Friendly Chops” — Kings captain Dustin Brown was honest about the difference between the Kings’ playoff run this year and their Stanley Cup–winning cruise through last spring.

“This is kind of what I expected it to be when we did this last year,” he said, then continued:

In retrospect, you look back and after it was all said and done, I talked to guys who had won a Cup before and they talked about how hard it is [to repeat]. Last year I thought we were playing at a level few teams ever played at, and this year we’re finding it to be much more difficult, not only in the nature of the games, but we’ve had to deal with injuries left and right. That’s part of playoff hockey and something we didn’t have to deal with last year. We’re trying to learn how to deal with it quickly and trying to persevere.1

The Kings’ latest injured player is center Mike Richards, who has 10 playoff points but has missed the last two games with a concussion suffered on a hit from Dave Bolland in Game 1. (He wasn’t happy about missing out: “If it’s just about Mike Richards making the decision, Mike Richards is playing tonight,” said Kings coach Darryl Sutter on Tuesday, though it wasn’t Mike Richards’s decision to make.)

In his absence, Sutter moved Carter from right wing to center and put Toffoli, who won Rookie of the Year honors in the AHL and played in just 10 games near the end of the regular season with the Kings, at one wing with Penner on the other side. And it was that line on the ice for Voynov’s 2-0 goal.

The 21-year-old Toffoli (alleged team nickname: Top Titty) was asked if Sutter had been saying anything to him.

“You know what,” he said, smiling a little, “the more he’s not really talking to you, I think you’re fine … Like I’ve said before, anyone would kill to be in the position I’m in, and whenever I’m told to go out there and play I’m just going.”

Toffoli may be one of the more exciting prospects the Kings have had in some time — he scored 48 points in 55 AHL games and twice hit 50 goals in the OHL as a junior — but it’s Voynov, another young player who made his NHL debut last season, who has already locked down a role. As a boy, the 23-year-old from Chelyabinsk longed to play in the NHL, but four years spent developing in the minor leagues nearly drove him back to Russia.

“He dreamt of the NHL,” his first Russian coach told sports.ru, as translated by Dmitry Chesnokov. But “it wasn’t coming together for him in North America … He was advised to stay one more year as he’d be given a chance anyway. He stayed and, in the end, became a regular in Los Angeles.”

Voynov’s breakout season last year also gave Kings GM Dean Lombardi the confidence to make the big trade for then–Blue Jackets forward Carter. He shipped Jack Johnson, a popular and affable defenseman, to Columbus as part of the deal. “I wouldn’t have been able to make that deal … without this kid allowing me to do that,” Lombardi told SI’s Adrian Dater last season. “As much as we needed Carter, I wasn’t going to leave my back end exposed, and I had it in the back of my mind that this kid was ready.”

And then there’s Carter, who signed an 11-year contract to play for the Flyers for what he assumed would be the rest of his career, was traded away (along with Richards) shortly before his no-trade clause was due to kick in, broke his foot right off the bat in Columbus and then sulked his way out of town, and scored 26 goals in 48 games for the Kings this season. (He’s added another six goals and five assists in the playoffs.) With Richards out, Carter was moved to center from wing — and made the transition look easy.

Carter wasn’t available to speak following Tuesday’s game because he was getting dental work done after a nasty sequence in which he chopped at Chicago defenseman Duncan Keith’s gloveless hand and was rewarded with a nasty hook to the face. (Keith, who appeared to apologize to Carter later and who explained postgame that it was a “just a little scuffle” and he wasn’t trying to hit him that hard, will have a disciplinary hearing with the league for the play.)

But Voynov was asked about just how well Carter was playing. “He plays all the time well,” he said, sort of the polite version of duh.

It’s amazing how one game can make a series suddenly look so different. (Pittsburgh Penguins fans, don’t give up hope!) Following two wins in Chicago, including one in which Jonathan Quick was pulled from the net, the Blackhawks were rolling.

Now they’re back on their heels, and could potentially lose Keith — whose 26:47 of ice time Tuesday night was the highest of either team’s skaters. Tuesday night’s win was the Kings’ 15th consecutive at home, and a 16th would tie up the series at two games apiece.

“It’d be nice if we could find a way to take that with us on the road,” Scuderi said. (It all evens out eventually: last season, the Kings were road warriors who had trouble winning at home.)

“I didn’t like our pushback,” Chicago coach Joel Quenneville said after the game. “The last 10 minutes was basically the way we should have started, have that intensity.” The Blackhawks had one of their best chances to tie the game during those last 10 minutes when Bryan Bickell, who scored his seventh goal of the playoffs earlier to cut L.A.’s lead to 2-1, took a point-blank shot that Quick stopped with his blocker.

“That was awesome,” Williams said in the postgame press conference. “I came to him after the game … It’s like a broken record with Quick. We keep saying, ‘Yeah, it was a big save.’ There’s not much more you can say.”

A few seconds later, Williams was asked about winning the hard way, with L.A. scoring only a couple of goals.

“We won’t count the empty-netter,” came the reply.

“We got three,” he repeated. “We don’t care how we got it done. Everyone has been saying the Kings have maybe grinded their way through a lot harder than it was last year. It is. It’s supposed to be hard.”