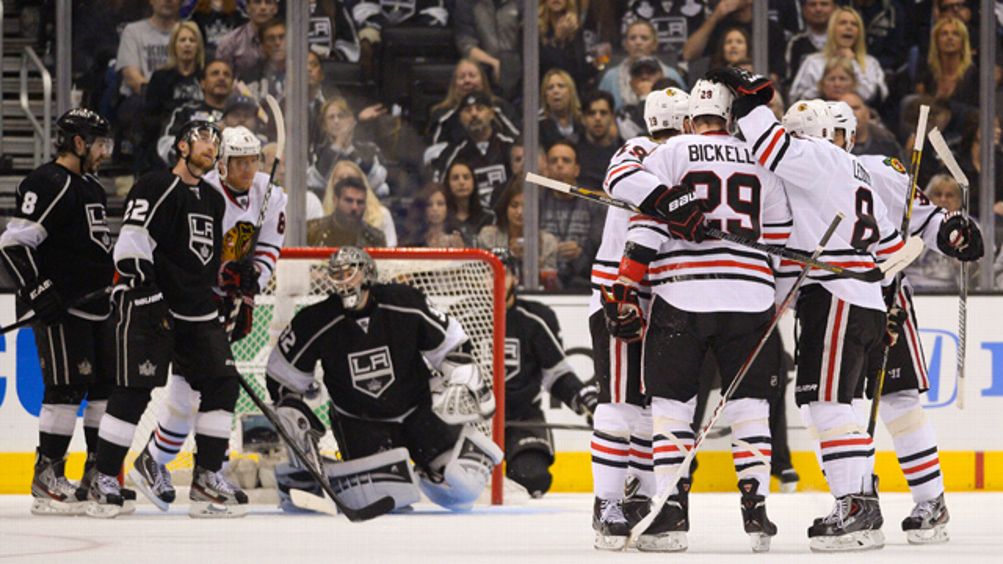 It’s not that all of a sudden that I’m a bad player,” Patrick Kane said Wednesday, after a Blackhawks practice. He was ostensibly speaking to the media assembled to cover the NHL’s Western Conference finals between Chicago and the L.A. Kings, but it sounded a whole lot more like he was chanting Stuart Smalley mantras to himself.

“It just doesn’t happen like that,” he continued. “I had a good regular season, and I’m still a good player in this league and can make plays. It’s something I’ve just got to go out and do. I can’t take no for an answer. Go out and do it.”

The next night, he went out and did. With 1:39 remaining in the second period of Game 4 on Thursday, Kane stabbed the puck across the goal line to tie the game, 2-2. It was his third goal of the playoffs, his first since May 20, and, truth be told, a minor act of larceny. By the time he touched the puck, which had originally been shot on goal by Bryan Bickell, it was practically in the net.

“I told Bicksy I was kind of sorry I stole it from him,” Kane said impishly after the game. “Kind of instinctive, when you see the puck there, to stick your stick in and touch it.”

It may have been instinctive, but he was there lunging around down near the goal for a reason: to try to get something, anything going, to try to avoid another off-day afternoon spent answering questions about why he’s scored only four playoff goals (including last night’s) in his past 29 postseason appearances (in other words, ever since he scored the Stanley Cup–winning overtime goal in 2010), to just “go out and do it,” dammit.

On Wednesday, Kane had self-diagnosed his postseason problem: He was not involved enough in the little games within the game, and was waiting for the puck to come to him instead of “going and getting [it] and making plays.” On Thursday, Kane involved himself so much that he finished with seven shots on goal. No other player recorded more than four. The best of the lot — or the most Kanesian, at least — came with 12:33 to play. Kane got the puck from Jonathan Toews, skated in, and pulled back so swiftly and fluidly that Kings defenseman Drew Doughty fell to his knees, then waited, waited, waited …

… and shot high and into Jonathan Quick’s outstretched glove. (Despite the save, the deked-out Doughty was so frustrated he slammed his stick into the boards.) It was a goose bumps moment: one of the most dazzling offensive players in the NHL essentially going one-on-one with the league’s zippiest goalie. It would make for an awesome one of those old in-reverse “History Will Be Made” commercials.

“He made a great glove save,” Kane said of Quick, who will almost certainly be his teammate on the U.S. Olympic team not too many months from now. “You have to give him credit. I remember being on the Olympic team with him [in 2010]. He worked hard in practice, was a fun guy to shoot on.”

The sequence was, as the NBC Sports Network crew put it, “vintage Kane.” No doubt there were some similar situations (sans the save) on the highlight reel of all 22 of his playoff goals, which he watched with his father earlier this week for inspiration. “It’s cool to watch those things,” Kane said. “It gives you a little confidence.”

But the goal Kane actually scored, the little chip of a Bickell shot that looked like it was already going in, was less Wayne Gretzky and more Gloria C. Mackenzie: the elderly Florida woman who claimed the $590 million Powerball jackpot on Wednesday and who purchased her winning ticket after cutting in front of another supermarket customer in line.

I’m being mildly facetious in comparing Bryan Bickell to Mindy Crandell, who in theory lost out on a nine-figure payday by virtue of being polite.1 But it’s in keeping with the prevailing narrative around the 27-year-old pending free agent, which is this: With every playoff goal he scores, the price that some team will pay to lure him this summer rises a half million here, a couple hundred thousand there.

Bickell has scored eight in 16 games so far, including one in the first period Thursday that Quick must wish he could take back. A guy like him is catnip to general managers: I don’t think I’ve heard a single player or coach discuss him without using the phrase “big-bodied,” he’s won a Stanley Cup, and here he is now — a bona fide playoff performer, a charming, former tutu-wearing figure skater, and in his mid-20s to boot!

Across the locker room, Marian Hossa, whose one-timer early in the third period turned out to be the 3-2 game winner, praised his teammate.

“It’s nice to see Bicksy being on a roll like he is,” Hossa said. “He’s big-bodied [SEE??], he’s got an unbelievable shot, so heavy. We just tell him to keep shooting the puck and good things happen and he’s done it. He’s done it so well.”

Chicago will likely make an effort to re-sign him, but they don’t have a great deal of cap flexibility to do so. With a relatively meh free-agent pool this summer, there’s no question he’ll be coveted, or that he’ll wind up earning orders of magnitude more than the $600,000 he’s currently getting. Never mind that he played in just four games during that Hawks 2010 Cup run, or that he’s currently shooting 25 percent in the postseason, a rate double his career regular-season average, or that 27 is typically past the prime age for forwards. (That last part is depressing, I know.) Forget what happened to guys like Ville Leino and Fernando Pisani, who were given monster contracts based on unsustainable performance. Bickell’s gettin’ paid.

“David Clarkson is enjoying all your ‘Bickell will be overpaid’ tweets,” joked NHL.com’s Corey Masisak, referring to the New Jersey Devils forward who is also becoming an unrestricted free agent, “as he prepares to cash in from the loser in the Bickell Sweepstakes.” 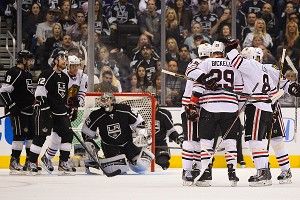 With the series heading back to the United Center and the Blackhawks up 3-1, the odds are beginning to grow longer for the L.A. Kings; if they couldn’t win at home against a Blackhawks team playing without suspended defenseman Duncan Keith, it’s going to be even harder to win on the road. But the Western Conference finals isn’t the only series that might end before it even feels like it’s begun. The Boston-Pittsburgh matchup in the East may not even make it to the weekend!

The Bruins have a chance to pull off a stunning sweep of the Penguins on Friday night on home ice following an epic game on Wednesday that ended when Patrice Bergeron scored with 4:41 to play in the second overtime to give Boston the 2-1 win. (It was Bergeron who broke Toronto’s collective heart with a Game 7 overtime goal in the first round that sealed a comeback from down 4-1 in the third.)

“Yeah, obviously you’ve got to drink a lot,” said Pittsburgh goalie Tomas Vokoun on Thursday when asked how he recovered from the grueling game. An entire city of Yinzers raised their Yuenglings to that one, but apparently he was talking more along the lines of Gatorade. “Some guys have a banana or shake or stuff like that.”

For all the fretting that this year’s postseason has been an overly low-scoring and dull affair, Wednesday’s game had all the makings of a classic, despite featuring just three goals. When David Krejci scored his ninth of the playoffs just 1:42 into the game, it seemed like we might be in for a repeat of the 6-1 spanking the Bruins had administered in Game 2.

But the Penguins buckled down, and after the first intermission they attacked. (This attempted-shot timeline does a great job of showing Pittsburgh’s post-Zamboni surge.) Chris Kunitz tied the score 8:51 into the second period, and until Bergeron’s goal muchmuchmuch later, no one would score for more than 66 minutes — longer than an entire hockey game. Vokoun finished with 38 saves in a performance that ought to leave no question of who should start Game 4, but it was Boston’s Tuukka Rask who absolutely stole the show.

Before Game 2, Bruins coach Claude Julien gave Rask a rare compliment for a goalie. “Tuukka’s normal, really,” he said. “You know what, I’m not going to get into Timmy [Thomas]. I’m just saying Tuukka is normal as I’ve ever seen in a goaltender. I can talk to him during periods … I wouldn’t dare do that with any other goaltender I’ve had in the past.” (He added that he considered Rask’s famous temper part of being normal, a comment that would prove prescient on Wednesday morning.)

Rask’s 53-save effort included facing 13 shots during Penguins power plays and brickwalling them all. He had some support from the Bruins skaters, who blocked 25 shots — none more memorably than Gregory Campbell, who was visibly injured when the puck hit the side of his leg. He remained on the ice for another 45 seconds or so, skating around doubled over on one foot yet successfully killing the penalty. When the whistle finally blew, he was whisked straight back to the locker room. Later it was announced that he had broken his fibula on the play.2

The third period was tense. The first overtime necessitated Xanax. And the second overtime? It was almost cruel. I was gearing up for overtime no. 3 and feeling blessed that I wasn’t living in the Eastern time zone when, all of a sudden, thanks to Bergeron, it was over. What had been a seesaw of a game suddenly turned into one of those sadistic pranks in which your “friend” gets off while you’re stuck at the top. And just like that, the Penguins plummeted, hard.

The next day coach Dan Bylsma was asked, ominously, “What do you think is at stake for your future tomorrow?” He answered something about taking it one game at a time; winning Game 5 and going from there.

Later, the question was asked more pointedly. What do you think is at stake for your future as head coach tomorrow and the rest of the series?

“I’m not coaching — I don’t coach, have never coached for my job,” Bylsma said, reiterating that they only needed to focus on the one game. He repeated the mantra again Thursday, beginning to seem a little bit like Patrick Kane trying to convince himself that he’s good enough, goshdarnit.

“We need one person to score, one individual to score last night,” he said. “We had plenty of opportunities to get that, from our top guy to Craig Adams hitting the post there in overtime, with that opportunity. We need to win a hockey game and our team needs to win a hockey game, and it’s right in front of us for Game 4.”

As Kane would say, it’s not that all of a sudden the Penguins are a bad team; it doesn’t just happen like that. But in the postseason, that’s always exactly how it feels.