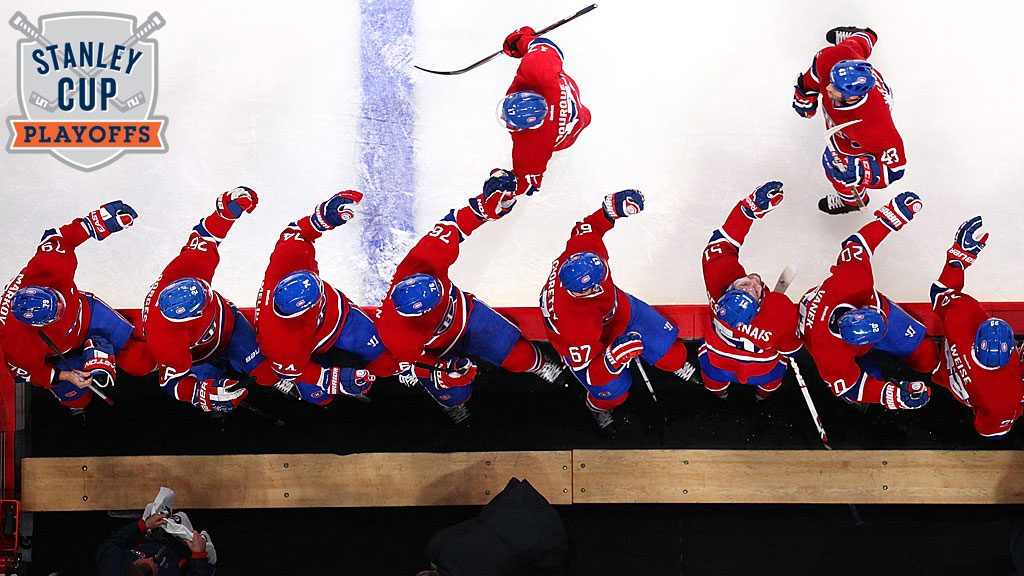 First blood has been drawn in the playoffs, with one team eliminated and another safely through to the second round. And that means it’s time to write the traditional piece lauding the performance of the victor, and to analyze whether, with one easy series win already under its belt, it now deserves to be considered a Cup favorite. So if I check my bracket, that means today we’ll be singing the praises of …

Really, hockey gods? You haven’t piled enough misery on this poor Leafs fan? Now you’re going to make me say nice things about the Montreal Canadiens? You guys are jerks.

Montreal’s 4-3 win over the Tampa Bay Lightning on Tuesday completed a four-game sweep of its first-round matchup, sending the Habs through to the Eastern Conference semifinal to await the winner of Boston-Detroit. While it would be a stretch to call the result an upset — the Lightning were the higher seed, but finished only a point ahead of Montreal — it was a surprise to see the series end so quickly. Tampa Bay had been one of the season’s better stories, making the leap from 28th overall in 2012-13 to eighth this year. And it’s not like the Canadiens went into the postseason looking like a powerhouse, with only four teams having longer odds to take home the Cup.

What happened? The cynical view is that Montreal drew an easy matchup and spent the first round kicking sand in the face of a playoff weakling. That sounds like an odd thing to say about a 101-point opponent, but the Lightning team that showed up for the postseason was very different from the one that did so well in the regular season.

For one thing, they’d been missing reigning Art Ross winner Martin St. Louis since the trade deadline, after he forced his way out while leaving the Lightning with only one potential trade partner.1 Their leading scorer, rookie Ondrej Palat, missed Game 2 with an injury, and star winger Steven Stamkos took a knee to the head midway through Game 3 and spent the rest of the series playing hurt.

And then there was the goaltending. Perhaps no team in the league relied on its starting goalie more than the Lightning; Ben Bishop was one of the season’s top breakthrough players, earning consideration for the Vezina and perhaps even the Hart. But he didn’t dress for the series after a late-season injury we now know was a dislocated elbow, and the drop-off from him to backup Anders Lindback (and, eventually, backup backup Kristers Gudlevskis) was massive. The Lightning never got the big stop they needed, and every hockey fan knows that bad goaltending spells certain doom in the playoffs.

When you look at it like that, maybe the Lightning were just a young team that had already overachieved, and predictably fell apart once adversity hit. We shouldn’t be impressed by the Canadiens sweeping them, because any decent team would have.

That’s a tidy explanation, but it doesn’t quite work. To start with, it doesn’t give enough credit to the Lightning. This wasn’t a one- or two-player team. It was one of the league’s top 10 possession teams2 and posted a goals differential that wasn’t far off from teams like Colorado and Los Angeles. And the Lightning did much of that without Stamkos, who broke his leg in November and missed half the season. Tampa Bay was a legitimately strong team, even if it didn’t look like it for most of the last week.

And in any case, you can only play the team they put in front of you. The Canadiens drew the Lightning, and they beat them in four straight. While three of the contests ended up being one-goal games, Montreal trailed for less than five minutes over the entire series.3 It wasn’t quite a dominating performance, but it was a very good one. And it showed off some of the best qualities of a deep roster that boasts strength at each position.

Let’s start with Carey Price in goal. It seems bizarre to argue that a player in a market like Montreal who was just two months removed from leading Team Canada to Olympic gold could be considered underrated, but you could make that case with Price. A lot of that is based on his playoff résumé — coming into this year, he had posted an unimpressive .905 save percentage over his postseason career. If it’s possible to own a gold medal and still be stuck with a reputation for being unable to win the big one,4 Price was headed in that direction.

But that’s the danger of relying on tiny playoff sample sizes, because Price’s body of work over his career has been impressive. Since breaking into the league as a 20-year-old in 2007, he’s been one of the NHL’s 10 best starters, outperforming guys like Jonathan Quick and Marc-Andre Fleury. Of course, those two have Cup rings, which many would consider a trump card in this sort of discussion. I’d prefer to point to a 93.4 percent 5v5 save percentage this season, which ranked behind only Tuukka Rask and Semyon Varlamov and will probably earn Price a Vezina nomination.5

Things get a little more interesting on the blue line. Reigning Norris winner P.K. Subban and veteran Andrei Markov get most of the attention, and Josh Gorges and Alexei Emelin round out a solid top four. But coach Michel Therrien has a reputation as a decidedly old-school type, and his late-game defensive deployments, which sometimes saw the electrifying Subban nailed to the bench in favor of the more traditional stay-at-home skill set7 of Douglas Murray, were a source of frustration for Canadiens fans.

Therrien shook things up before the series, relegating Murray and 6-foot-6 blueliner Jarred Tinordi to the press box in favor of the smaller Mike Weaver. He also leaned heavily on Subban, giving him more than 28 minutes of ice time in Game 3, his second-highest total of the year in a regulation game. It was a nod toward skill over size, and it worked — Subban led the team in scoring, and Montreal spent most of the series controlling the puck. More important, it reassured fans that Therrien wasn’t too stubborn to make adjustments.

Add it all up, and you get a roster that cruised to what looks like a relatively easy win. That word “relatively” is key here; Montreal still won three of the four games by just a single goal. There’s also some indication they were riding a hot streak, posting a 109.3 PDO at 5v5 close, and shooting 11.6 percent overall.

But let’s not get carried away with the percentages and style points in a short series. While it’s overly simplistic to say that wins and losses are the only stats that matter in the playoffs, it’s fair to point to a four-game sweep and say “they found a way to get it done.” And there’s even some room for optimism — Montreal was excellent at even strength but shaky on special teams.8 If those numbers move back toward season averages, and they should, then the Canadiens will start to look even more dangerous.

So, what’s next? Or, more specifically, who’s next, and can the Canadiens beat them? They’ll face the winner of the Red Wings–Bruins series,9 and it’s worth remembering that if that goes long, Montreal could wind up with up to 11 days of rest in between games. That could be a mixed blessing; conventional wisdom says it would be an advantage during Round 2 and beyond, but could leave it rusty for the opening game.

If Montreal ends up facing Detroit, the Canadiens will be the favorites. They’ll have home ice, a strong edge in goal, and will be the healthier team.10 This week’s potential return of injured Red Wings captain Henrik Zetterberg could tip the scales somewhat, but Montreal would look like a good bet to return to the conference final for just the second time in 20 seasons.

But of course, Detroit isn’t the matchup that anyone aside from Wings fans wants to see. The real main event would be a series between the Habs and their archrival, the Bruins. That would be a tough draw from Montreal; Boston is easily the top team in the Eastern Conference and might be the best team in the league.11 But for pure entertainment value, it would be hard to beat.

And as good as the Bruins are, beating the Canadiens would be far from a sure thing. They met four times in the regular season, and Montreal took three of the games. On paper, the Canadiens should be a terrible matchup against the Bruins’ size and physicality. But they’ve managed to hold their own in that department, and just as important, they seemed to drive the Bruins crazy in the process.12 Montreal can’t match the Bruins’ strength from the net out, because nobody in the league can. But in a short series, it would have a shot. Not a great shot, but a shot.

That would still leave the Canadiens with the Metro winner, plus whoever can emerge from the Western Conference battle royal, and the Habs would be underdogs in those matchups, too. Add it all up, and the odds of the Canadiens snapping a franchise-record 21-year Cup drought seem slim.

But that’s a conversation for later. Right now, the Canadiens are resting up while the 14 other remaining teams bash each other’s heads in. That’s not a bad place to be, especially when you’re a good team that’s already pulled off one surprise and is maybe, just maybe, staring down the start of another Cup run.

Now if anyone needs me, I’ll be spending the rest of the day showering.