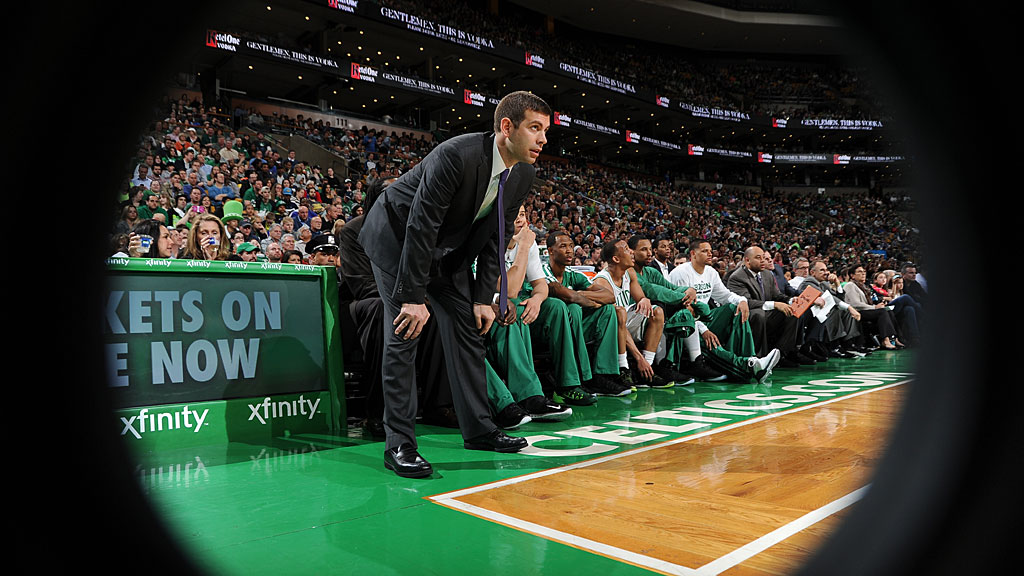 “There’s a couple different ways to look at it,” said Brad Stevens, after Boston had lost its last game of the season, badly, to the Washington Wizards on April 16. The Wizards, as they say, were “playoff-bound.” (Well, you would only say that if you were a sportswriter of the long-dead variety. Anyway, the Wizards are continuing to prosper, John Wall being one of the league’s great growth stocks at the moment.) The Celtics were … incredibly not.

The topic of tanking was delicately broached, in the context of Stevens’s building a team during a season after which almost everyone on the roster would be legitimate trade bait.

“They have a lot to play for. I think everything matters,” he said. “We talk about that as a team. That’s kind of the rallying cry going into the offseason: Every little thing you do matters … We’re all shooting for something, and every single day and every single effort you put into it matters toward achieving it. This is really not fun, to lose. We’ve had our moments of tasting winning against some good teams. We had our moments of letting some games get away, and you hope to learn from all of those and not let the bad things happen again.”

All season long, with one portion of his fan base frustrated by losing, and another (alas, larger) portion of his fan base delighted by it — because it meant a chance in the Joel Embiid/Julius Randle/WhoeverTheHellIItIs PowerBall Sweepstakes on May 20 — but with a remarkably substantial portion of fans still showing up for home games, Stevens remained as patient and as outwardly calm as could be. His head was so level you could bowl on it. He managed his young team without Rajon Rondo, and with him, however briefly. You could see the improvement in rookies like Phil Pressey, a feisty tumbleweed of a guard, and Kelly Olynyk, a lanky 7-footer with a lovely outside touch.

“The players see his work ethic, they see his integrity, and they see his intelligence, so I think he’s earned the respect of the team in a really difficult situation this year. And I know he’s going to get better,” said Danny Ainge, the Celtics president of basketball operations. “He’ll be better next year, and he’ll be better the next year. He’s a sponge.”

“When you first get the job,” Stevens said, “the tradition and the history kind of overwhelm you. But once you get into the job, it’s a job. What did impact me was the support this team has, not just in the city, but all over the country as we go into different venues. These fans are amazing. I’m not just saying that to say it. This is a unique fan base. And I told our guys that demands unique attention to detail. I kind of know how gripping it all is when on Opening Day, I’m on the road, and my wife calls me and my son comes home from school and says, ‘Turn on the Red Sox. It’s Opening Day.’ And we’ve been here since August.”

Stevens and this lot won 25 games — one in the dying seconds against Miami, a season highlight — and that was just fine with some of the people who kept showing up. This is a strange place for Stevens to be. Your future prospects depend on winning. Your whole professional being is geared to winning. And a great number of your team’s devoted followers are overjoyed about your losses. “The one thing that they never really did was splinter,” Stevens said. “Things like this [season] can splinter you pretty easily, and they stayed together pretty well, as far as standing up for one another, and being a team, and not pointing blame. It’s been a pretty good group from that regard, and that gives you a chance to improve.”

Said Stevens: “You don’t have that much time. I think the best thing I learned is that it’s not fun to not win, but it doesn’t define who you are or how you go about your business. So, one of the things that I’m probably most happy about with our team is that they didn’t change, necessarily, who they were. They didn’t let the losing, or the multiple losses, affect them or their approach. I hope that I was the same way … The part I felt most comfortable [with] was in the game, once we got used to the timeouts, and the 24-second clock.”

That’s probably the way you cope with it, if you’re a career coach who is only 37, and who has been a roaring success throughout your life. That is the way you cope with your first year in the NBA, where so very much is so very different, a strange world in which, yes, you can actually win for losing. 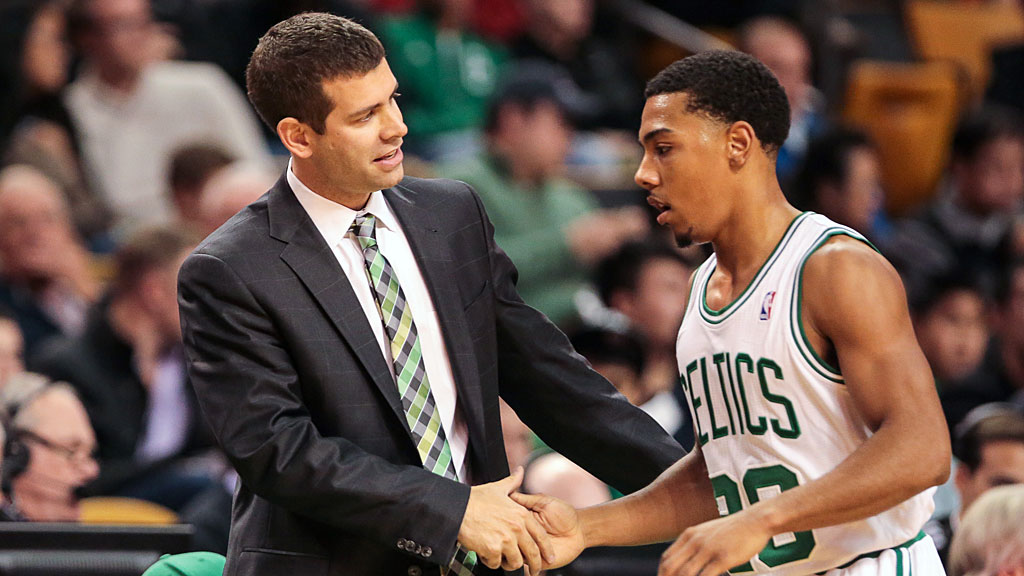 It is still hard to fathom how successful Brad Stevens was at Butler University, where his teams made two national championship games in a row, and where, in 2010, his Bulldogs came within the width of the rim of winning it all. Gordon Hayward’s half-court shot — and it was a shot, not a heave — rattled out against Duke and the tournament lost what would have been the one shining moment to outshine all the other shining moments. At Butler, he was a ludicrous 166-49 in six seasons. Last season, Butler’s first without Stevens since 2000, when he walked out of a job with Eli Lilly and showed up in the Butler basketball office as an unpaid assistant, Butler was 14-17. He won 11 more games than that with the Celtics.

“The biggest surprise to me,” he said, a few days before the season ended, “was the lack of practice time, and how little practice time you had in the preseason to get ready for the season. That’s the biggest difference that I can see, beyond the level of the talent and the 48-minute game and the 24-second clock and the obvious things.”

The perspective of the game accelerates as you move from a place like Butler to a place like Boston. So much of coaching college basketball involves teaching average players to be better. In the NBA, almost everyone you coach is as good as the best players you had in college, especially at a place like Butler, which was not exactly a Kentuckyish career fair on its best days. This is about making talented people — most of whom know how talented they are, and some of whom are positively delusional on the subject — realize and surpass limitations that many of them have never had to acknowledge before. (No, that killer crossover that stunned the IUPUI point guard is not going to work against Russell Westbrook. Or, in Stevens’s case, the scheme that befuddled Michigan State is going to fail against the Miami Heat because LeBron James is simply going to jump over it.) And you have to do it over 82 games wedged into seven months. Some people — like, say, former New Jersey Nets coach John Calipari — never catch up.

“You have to adjust,” Stevens said. “I feel like a teacher. You want to come up with your daily plan or your weekly plan for your professional teaching and those type of things, and you just have to expedite it all. You have to really adjust that clock, and you have to do it in different ways. You can’t do it in physical five-on-five situations all the time. Like, if we were to practice today, we wouldn’t have 10 guys. You’ve got to be able to do it in film, in walk-through. You’ve got to be able to do it by putting two coaches in it.”

He was, in every way, as much of a rookie as Pressey and Olynyk were, learning his new job while he was trying to teach them theirs, and all of it occurring on a learning curve shoved into hyperdrive. “The thing I love about rookies is trying to prove something every day. They’re trying to prove they belong,” he says. “It’s the intensity with which they go about their business.”

The last game the Celtics won at home was not quite a week before the last one they lost, which was also the last one they played. They came from behind on April 11 and beat the, yes, playoff-bound Charlotte Bobcats, 106-103, in a game in which Phil Pressey’s energy was the conspicuous engine behind the rally. He is a legacy; his father, Paul Pressey, was the player for whom Don Nelson invented the position of “point forward” with the Milwaukee Bucks. Pressey is shorter than his father; at 5-foot-11, he is a traditional point guard. Against Charlotte, he scored 10 points and rang up 13 assists in 39 minutes, and he finished the season more strongly than he began it as he filled in for Rondo, who pretty much lost the year to a knee injury. At one point against Charlotte, Pressey poked the ball loose, dove to the floor for it, and got Olynyk a layup, which set the arena on its ear. If this was tanking, let us make the most of it.

Due to Rondo’s unavailability, Pressey — whose early years were spent playing AAU ball in Boston, as well as at nearby Cushing Academy — has drawn his coach’s attention more closely than would most undrafted free agents. “He’s a bit of a riverboat gambler,” Stevens said. For himself, Pressey has watched his rookie coach learn the job as he learned his.

“It’s pretty neat, because he’s learning on the fly the same as me,” Pressey said. “I really feel like we have a good connection because, sometimes, he’s calling a play, and I’m calling a play at the same time. Since day one, he’s improved. A lot of the college rules are different from the NBA and, even though he studied on it, out-of-bounds plays he’s gotten better, defense he’s gotten better. He watches more film than I’ve ever seen. He has no choice but to get better every single day.”

Pressey is expendable this offseason, as is every player on the Celtics roster, as Ainge seeks to rebuild in a hurry. Central to that, of course, will be whatever player it is that pops out of the claw machine in the lottery, which was why it was possible, in this very strange first year of Brad Stevens’s professional career, that the Celtics could win for losing.