Time in the Sun 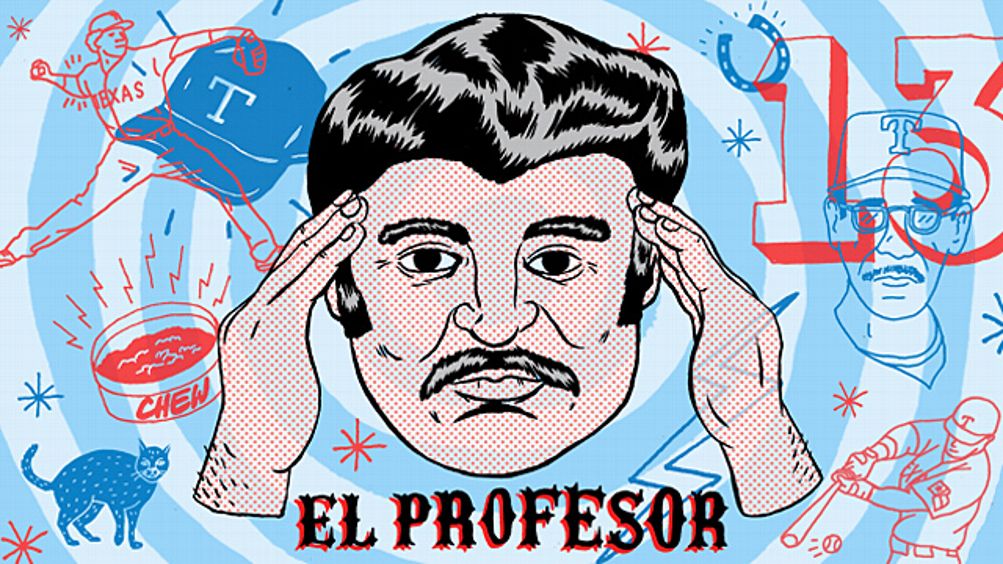 An hour before baseball’s trade deadline, I sat in a room on Long Island while a portly, mysterious man studied the ancient object I’d set before him. I didn’t know much about Professor Sánchez. I’d found him in the back pages of a Spanish-language newspaper. He spoke little English. He never gave his first name. Professor Sánchez is a mentalist.

“Profesor,” I said in crummy Spanish, “my favorite team is the Texas Rangers.” I nodded at the object I’d placed before him: a throwback Rangers cap from the era of Geno Petralli. “Do the Rangers,” I asked, meeting his eyes, “have any … curses?”

On July 31, the Rangers were in first place in the AL West. But something weird was happening, something that felt like bad juju. It was one thing for Josh Hamilton, Nelly Cruz, et al. to score just 3.52 runs per game in July, the Rangers’ worst one-month average in 20 years. It was another thing for the Rangers’ scoreboard to mysteriously malfunction for an inning. For two Rangers pitchers, Colby Lewis and Neftali Feliz, to get season-ending diagnoses within days of one another.

Josh Hamilton admitted he’d been “disobedient” to his god and had gone back to an old vice, chewing tobacco. “I just feel out of sorts, mentally,” Hamilton explained. He hit .177 in July.

On August 1, Ian Kinsler and Elvis Andrus committed inexplicable back-to-back errors that led to a six-run inning.1 The Baseball Do blog tweeted, “The Rangers are cursed.”

Now, to be clear, I didn’t want El Profesor to help me place a curse of my own — on, say, David Freese, C.J. Wilson, whoever plays for the A’s, or, for old time’s sake, ex-owner Tom Hicks. Nor was this a Damn Yankees thing: my soul for a World Series ring. No, my motives were pure. El Profesor would be my spiritual cutoff man between the suspicious stuff happening on the field and the possibly wicked stuff happening in the heavens.

I needed to reverse a jinx.

Read New York’s Spanish-language newspapers and you can find ads for shamans. They’re mixed in with promotions for prostitutes, porcelain dentures, music shows in Brighton Beach, and clowns named Twinky. I first found a man who calls himself Comanche and works out of Woodside, Queens. In his ad, Comanche wears a Native American headdress and holds a crucifix — he’s a religious switch-hitter. I rejected him out of hand.

There was El Hijo del Monte — “Son of the Mountain” — who’s a son of Long Island. El Hijo specializes in “difficult cases” and looks like Graham Greene’s character in Dances With Wolves. I couldn’t get El Hijo to answer his phone.

That brought me to El Profesor, a tarot specialist, who appeared in El Diario with his fingers buried in his temples. “You can be the victim of witchcraft and not know it,” El Profesor’s ad warned. The symptoms he listed included impotence (in bold print), vomiting, loss of sleep, skin spots, and hair loss. I did not remember the Rangers suffering from anything like that, though Hamilton did have a virus back in June.

“Witchcraft,” the professor’s ad continued, “can destroy your home.” Call me, it said, before you’re dead.

I called him. Actually, I called his scheduler. She told me that the professor did not speak English and hung up. So I got on Craigslist and found a translator named Alice. Alice called, made an appointment, and agreed to meet me at El Profesor’s Queens office on a Friday night.

“He’s not here,” Alice said when I met her that night at the botánica. The man behind the counter explained that El Profesor was working out of Hempstead, Long Island, at one of his two other locations in the greater New York area. (No one had mentioned he’d be there when Alice made the appointment.) The man behind the counter called that botánica and made another appointment for us the following Tuesday. Alice’s schedule was free, so I told her I’d rent a car and we’d drive out together.

I walked Alice, who is blind, back to the Q18 bus. We took small steps as her cane scratched across the concrete. Alice worked more than 30 years translating for the New York City Supreme Court. She heard all kinds of cuckoo murder stories from pre-Giuliani New York. She still followed the latest on radio, like the Jersey City man who allegedly threw his ex-girlfriend and their child out a window in July.

I was Alice’s second Craigslist customer. “The last client I found didn’t show,” she said. “If you didn’t show, I was never going to go on again.” Her boyfriend was nervous about her meeting strangers, and my request must have made him even more terrified.

“What do you want to interview this guy about?” Alice asked me. I explained that if I could gain access to El Profesor’s inner sanctum, I could divert his spiritual powers from me to the Rangers. I could get a tarot reading of a baseball team. Alice was quiet for a minute and then said, “You don’t believe in this stuff, do you?”

Well, yes. I do. I believe if you leave the couch during a commercial, you should be back in the same spot when play resumes.2 I believe in lucky jerseys. I know why I go for supernatural crapola. It forms a bond between me, a fan, and them, the Rangers. It allows me to pretend I have some hand in what’s happening on the field. Sports fans are like the clients of El Profesor who seek to gain control over what they know they can’t. In different ways and in different languages, we’re asking, “What shirt should I wear to win the lottery?”

For the last two seasons, the Texas Rangers, a team that had never previously been to a World Series, have been less cursed than, say, the Orioles. But in a strange way, success makes bad luck stick out. Fortune frowns on Oddibe McDowell’s team and no one cares; Bill Buckner muffs a grounder and 10 people write books.

In the 2010 World Series, the Rangers hit a meager .190 against Giants pitchers ranging from Tim Lincecum to Madison Bumgarner. I was in the upper deck in Arlington, worrying I’d worn the wrong throwback cap.

During last year’s Series against the St. Louis Cardinals, I was on my honeymoon in Cambodia. The live feed started early in the morning, and I watched from bed when Freese hit that two-out, two-strike, Game 6 pitch over Cruz’s head. Did I think about the unluckiness of watching a game from bed? Yes, I did. Later that afternoon, my wife and I visited a Khmer Rouge torture facility.

The Rangers played so well this April, going 17-6, that I almost tuned out the chatter that they were becoming the 1990s Braves. (In April, it was Angels fans who felt jinxed.) Then came the summer and the Rangers started to wilt. Mike Napoli was hitting 200 points below his 2011 OPS. Hamilton was in a religio-mechanical funk, chasing pitches out of the strike zone. Which also happened to be the place where Yu Darvish’s pitches were landing, after the Japanese rookie’s hot start. The night before I met El Profesor, the Rangers kicked off a huge homestand against the Angels by giving up 15 runs. Their division lead had shrunk to three games. And the Angels had gotten Zack Greinke.

I picked up Alice around two in the afternoon. “The jerk better be there!” she said. We passed the last half of the 40-minute drive — past LaGuardia and Citi Field into the back forty of Long Island — in silence.

El Profesor’s botánica is located on a dingy block of Hempstead’s Main Street, near 1 Missed Call Wireless (closed), Hall of Fame Cutz (also closed), Be-Bop Bagel, and a pretty solid-looking bookstore. We told the woman behind the counter we had an appointment. She led us past a large selection of Santa Muerte candles, incense packets, spell books (“Sit on a tiger skin … ” advises one hemorrhoid cure), and into a backroom lit by a single fluorescent light. Here, at last, was the inner sanctum of Professor Sánchez!

Except it was actually his waiting room. There was a burbling fish tank and a TV playing a Spanish-language reality show. A young woman and two kids were already waiting, and Alice and I took seats on either side of them.

A man in a yellow shirt and yellow tie checked El Profesor’s schedule. No, he said, you do not have an appointment. We sighed. El Profesor can work you in, the man said, but he does not allow translators. “I think you should give it up,” Alice said. No, I told her, I’m going in alone. The man asked if I’d like to pay the $25 fee up front.

A few minutes later, El Profesor appeared. He was wearing a sea-green dress shirt, a striped tie, and slacks. His visionary air was amplified somewhat by his considerable girth. He had the face of the Amazing Kreskin and the body of Paul Bearer.

We sat down in his office. A royal-blue curtain had been drawn around the walls, giving the place the feel of a circus tent. El Profesor asked me to remove my Rangers cap. I won’t quote him directly, but here’s the gist of it:

Bryan, he said, give me your hands.

I turned them palm-side up. No, he said, give me your hands. I reached across the table. El Profesor took out a magnifying glass and studied my palms intently. This lasted about 20 or 30 seconds.

Repeat after me, El Profesor said, and we prayed to be admitted into the celestial heavens. Then El Profesor took out a bottle, sprayed his hands, and removed the tarot cards.

El Profesor explained why Alice couldn’t come with me. He said the information he’d reveal would be very private. I laughed, but it was private. El Profesor told me, for instance, that one of my relatives is about to die. He revealed that an ex-girlfriend had been unfaithful. And he told me the precise days I should play the Mega Millions jackpot — which I guess is private, if I don’t want to share the loot.

When it was time for questions, I placed the Rangers hat in front of him and asked if he detected any curses.

El Profesor stared at the hat for a time and said: It’s good.

“That’s it?” I said. Actually, I didn’t say that. I thought that. I suspected my question to El Profesor had been too broad — how could a single tour of the tarot divine the spiritual health of Ron Washington, Jon Daniels, Nolan Ryan, plus 25 roster players and September call-ups? I tried to be more specific.

“I have a friend, Josh Hamilton,” I said, my Spanish now crumbling like Hambone’s July OPS. “He is … ”

Yes, he said. The whole team is good. There will be a nice surprise — “una sorpresa muy linda” — this year.

Since we had a couple of minutes left, I asked about my mom. She was also good. I’d either had the tarot equivalent of Hamilton’s four-homer game or El Profesor was trying to end our session. I suspect the former, since he gave me his cell number to set up the next consultation.

I met Alice in the waiting room. She told me the place gave her the willies and she’d thought about bailing on me. “What did he tell you?” she asked.

I told her the Texas Rangers were going to be … good. A few minutes later, I looked at my iPhone and saw they’d traded for Ryan Dempster.