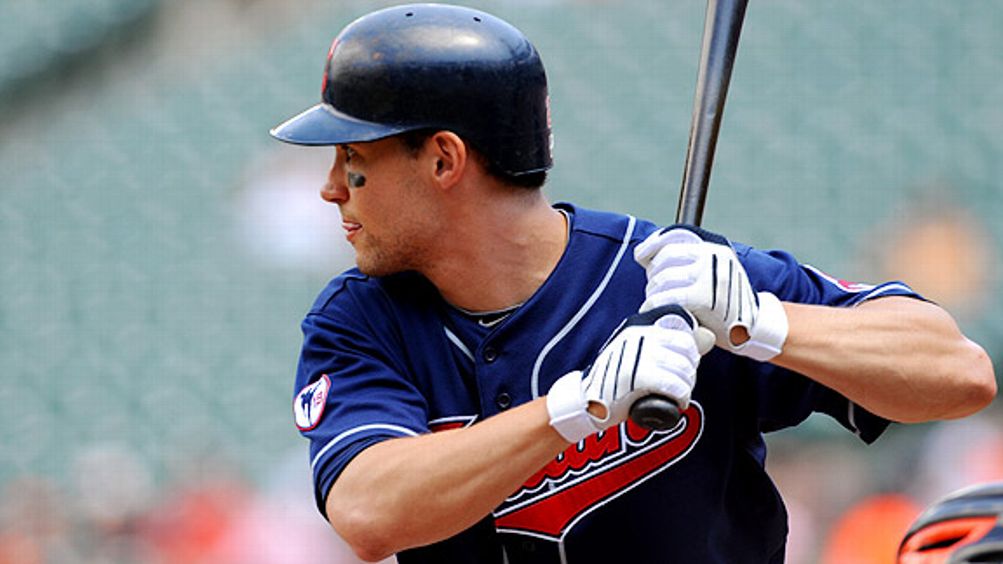 Regression’s a bitch. Two months ago the Cleveland Indians, losers of 93 games last year, were 30-15 and seven games up on their AL Central rivals. Seven weeks into the season, even the most hardened skeptics had to concede that the Indians were in good shape to make the playoffs. In a division in which no other team had a winning record, all the Indians had to do was play .500 ball and they’d waltz into the postseason.

If the Indians had done so, they’d be leading the AL Central by four five games today. Instead, they’ve gone 22-33 in that span, winning at roughly the pace they established in 2010. The Indians were not a fundamentally different team than the one that lost nearly 60 percent of its games last year, so it can’t be considered a surprise that they’ve gone back to losing that much this year.

Yet thanks to their hot start, the Indians are still 52-48, and thanks to the mediocrity of the AL Central, they’re still in the race, two one game behind first-place Detroit. Even that accomplishment, modest as it is, is impressive when you consider that the Indians have assembled virtually their entire roster from other teams’ rejects.

For the most part, Cleveland’s scavenger approach to team building has been a masterpiece of roster construction. The cheapest way to field a roster is through the draft, but the Indians own the fifth-lowest payroll in baseball and have somehow put together a competitive team with almost no homegrown talent. Cleveland is the only major league franchise that doesn’t have at least one player in its lineup who came up through the organization’s farm system. Only starters Fausto Carmona and Josh Tomlin, along with middle relievers Rafael Perez, Tony Sipp, and Vinny Pestano were signed as amateurs.1

Building a winner with other teams’ spare parts is a tradition of sorts in Cleveland. Even when the Indians emerged from 40 years in the desert to go 100-44 in 1995, the best record by any team since 1954,2 most of their hitters had been plucked away from other organizations. Some were acquired in legitimate trades (Sandy Alomar and Carlos Baerga were prospects acquired for Joe Carter) and some were flat-out stolen from unsuspecting organizations. Kenny Lofton came in exchange for Eddie Taubensee; the Indians traded Felix Fermin and Reggie Jefferson for Omar Vizquel. Eddie Murray was 38 years old when Cleveland signed him as a free agent, gambling that he wasn’t washed up — and he wasn’t.

But the 1995 Indians were also built around three homegrown players: Jim Thome, Albert Belle, and Manny Ramirez. Setting aside when and how Ramirez may or may not have used PEDs, there’s no question that both he and Thome have had Hall of Fame-caliber careers, and Belle was on a Hall of Fame trajectory before a degenerative hip forced him to retire at 34.

The blueprint for the 2011 Indians, on the other hand, didn’t have space for homegrown talent. Evidently, that blueprint consisted mostly of performing Jedi mind tricks on other franchises’ general managers.

In June 2006, the Seattle Mariners were looking for some veteran talent and Indians GM Mark Shapiro was happy to provide it. Shapiro shipped Eduardo Perez to the Emerald City, and the platoon first basemen wound up hitting .195 with one homer for the Mariners before retiring. In exchange, the Indians received a minor league shortstop who was hitting .236/.323/.360. That shortstop was just 20 years old and already in Triple-A. Asdrubal Cabrera debuted with Cleveland the following year, and this season he emerged as perhaps the best-hitting shortstop in the American League and made his first All-Star team.

Shapiro wasn’t done toying with the Mariners and their general manager, Bill Bavasi. Seattle’s thirst for platoon first basemen was apparently unquenchable; a month after acquiring Perez they would ask for Ben Broussard, who hit .238 with 8 homers for the Mariners. At least Broussard managed to hang around another season before hanging up his spikes. In return, Cleveland obtained Shin-Soo Choo, a former top prospect who couldn’t crack the Mariners’ lineup despite hitting .323/.394/.499 in Triple-A. Choo became the Indians’ starting right fielder in 2008 and has been one of the best all-around players in baseball ever since.

Seattle finished 78-84 that year, good for last place in the AL West. Bavasi no longer works for the Mariners, and he never did find the droids he was looking for.

Two years later, the Los Angeles Dodgers needed a third baseman at the trade deadline, and once again Shapiro was ready to deal. The Dodgers received Casey Blake, a competent everyday player in the last year of his contract. Competent players with expiring contracts rarely fetch premium talent, but the Indians offered to pick up the remaining salary on Blake’s contract3, which helped them land Carlos Santana. At the time, Santana was already considered one of the game’s best catching prospects; now, he is considered one of the best young catchers, period. While Santana’s career batting average is just .236, this season he has already drawn 102 walks and hit 21 homers, and most scouts think the best is yet to come.

Cabrera, Choo, and Santana — a third of the Indians’ lineup — were all acquired for pocket lint, in deals so lopsided they would have been vetoed by your fantasy league commissioner. Yet all three trades pale in comparison to the great heist of 2002, when the Montreal Expos found themselves five games back in the wild card race at the end of June. Montreal GM Omar Minaya quite sensibly reasoned that since the Expos might not exist for much longer, he might as well sell his farm before the franchise bought the farm. The Indians sent Bartolo Colon to Montreal for Cliff Lee, Brandon Phillips, and a toolsy teenage outfielder named Grady Sizemore.

The Indians gave up on Phillips before he reached his potential and dealt Lee in another deadline trade in 2009. Sizemore, however, developed into one of the most exciting players in baseball; he was an All-Star and MVP contender each year from 2006 to 2008. Serious knee issues have threatened Sizemore’s career, but when healthy this season he has been an above-average centerfielder.

The four trades rank among the most one-sided deals in recent memory, and all four were tilted in the Indians’ favor. But wait, there’s more! In December, 2002, the Indians traded backup catcher Einar Diaz and soft-tossing right-hander Ryan Drese to Texas for an old Triple-A slugger named Travis Hafner. The Rangers thought Hafner’s minor league numbers — he hit .342/.463/.559 in Triple-A — were an illusion. They were wrong. Hafner was one of the most feared hitters in baseball from 2004 to 2007; like Sizemore, injuries have crippled him the past few years, but this season Hafner is healthy and batting .312/.403/.503 as the team’s starting DH.

Jedi mind tricks only go so far, and the Indians have been forced to trade actual ballplayers to acquire most of their other players. The 2007 Indians won 96 games and came within a game of the World Series; when that team faltered over the next two seasons, Shapiro traded his assets to acquire many of the building blocks for this year’s team.

The Indians struggled out of the gate in 2008 and by July they had sent CC Sabathia to Milwaukee for Matt LaPorta and Michael Brantley, who now start at first base and left field. A similarly disappointing 2009 led to a bigger purge. Catcher Victor Martinez was traded to Boston for Justin Masterson, who has emerged as a legitimate ace this season with a 2.57 ERA. Cliff Lee was auctioned off to the Phillies for no. 3 starter Carlos Carrasco and backup catcher Lou Marson. Mark DeRosa went to St. Louis in a deal for closer Chris Perez.

The 2011 Indians are like Fawkes, the phoenix of Harry Potter fame — they’ve sprung back to life from the ashes of their previous incarnation.

At least, that’s the glass-half-full version of the story. Here’s the flip side: With so much talent acquired so cheaply, the Indians should be dominating their division, and they’re not. Why were the Indians so bereft of quality prospects that, having filled seven lineup slots with players acquired in trades, they still had to go outside the organization to find a starting second and third basemen? They signed Orlando Cabrera even though he was 36 years old and coming off his worst season in a decade; they signed Jack Hannahan when he was 31 and had spent all of last season in the minors.

The answer is simple, if a little disconcerting: The Indians’ performance in the draft has been every bit as bad as their trade record has been sterling. In 1998, the Indians selected Sabathia with their first pick. Cleveland hasn’t signed an above-average draft pick since.

Quick: Who are Will Hartley, Corey Smith, Dan Denham, Jeremy Guthrie, Michael Aubrey, Jeremy Sowers, Trevor Crowe, David Huff, and Beau Mills? They are the Indians’ first picks in every draft from 1999 to 2007. If you recognized them, you must be a Tribe fan. Also, you need to put down the Xanax.

The best player in that crop was Guthrie and Luke Scott, who was 28 by the time he established himself in the majors.. By then, the Indians had long given up on them. For nearly a decade, the Indians have received hardly any help from their farm system. When you look at the franchise from that perspective, it’s no wonder they had to hustle on the trade market to survive. What is a wonder is that they’ve been so competitive.

Eventually, however, Cleveland’s stretch of good trades will come to an end. When Shapiro was promoted to team president after last season, Chris Antonetti was named the Indians’ new general manager. Antonetti is well-regarded by his peers, but asking anyone to repeatedly turn rust into gold is a tall order. They’ll need to draft better, and they have.

Their first-round pick in 2008, third baseman Lonnie Chisenhall, progressed quickly through the minors and made the Indians’ roster last month, allowing the team to put Hannahan on the bench. Alex White, the team’s first-rounder in 2009, made three solid starts for the club in May before injuring his finger; he should be back next month. Their second-round pick that year, Jason Kipnis, was considered one of the best second-base prospects in the minors before he was called up last week. The Indians expect him to replace Cabrera, and Monday night he rewarded their confidence with his first major league hit — a walk-off single to defeat the Anaheim Angels, 3-2.

With the Minnesota Twins showing signs of wear and tear, the AL Central will be wide open for the next few years. If the Indians step into that void, they have the mistakes of other teams to thank. If they don’t, they have only themselves to blame.

Previously from Rany Jazayerli:
The surprising Pittsburgh Pirates
The Milwaukee Brewers and the importance of defense in baseball
The promising future of the Kansas City Royals