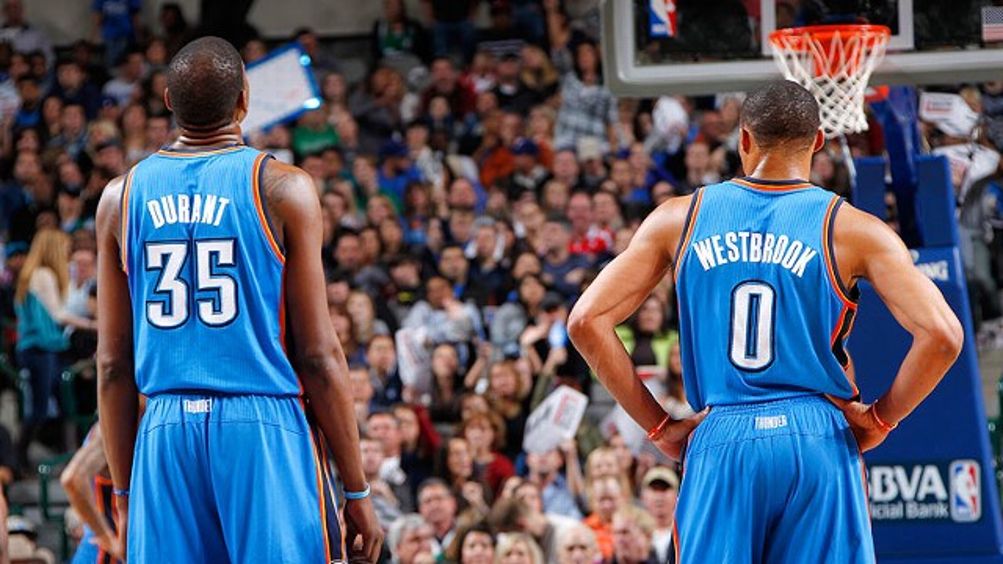 So guess what — it turns out Kevin Durant and Russell Westbrook can play together after all. Oklahoma City’s free-jazz marionette of a superstar and its hailstorm of a point guard are not, as fate would have it, the incompatible matter/antimatter Toby Keith/Dixie Chicks pairing that the recent history of semi-emergent NBA memes would suggest. I know, crazy, right? But the Thunder are 29-7 and are ahead of the Heat for the league’s best record. Durant is obliterating 25-foot jumpers as usual1 and Westbrook, armed with the assurance of his still-pretty-new $80 million contract, has bumped his scoring and his shooting percentage for the third straight year while running the NBA’s third-best offense and not even scowling that much. A couple of weeks ago Durant scored 51 and Westbrook scored 40 in the same game, the first time that barrier had been broken by teammates since Jordan and Pippen were new. The (pre-)story of OKC’s (possible future) conflict2 has disappeared in the glow that always seems to surround this team, bright as a natural-gas-company logo come to life.

Right? Well … I think so, yeah. As a Thunder fan and overall lovesick fool for any NBA team that gives me free chocolate-chip cookies, I couldn’t be more delighted with the way the season has gone. There’s the usual fun-Thunder stuff, of course, the last-second 3s and happy fans and ongoing sense of a young team exceeding expectations. (Also exceeding expectations, cosmic though they were: James Harden’s beard, which increasingly looks like what would happen if Motown broke out in ancient Egypt.) There are also pleasant surprises, like Serge Ibaka leading the league with 3.1 blocks per game,3 the bench turning into a murderer’s row (of benches), and even stuff like Reggie Jackson growing into the void left by Eric Maynor’s exploding ACL. Yes, I wish the defense were tougher, and I wish Kendrick Perkins would find a way to pull out of his weird free fall, both as a player and as a human being who keeps making headlines like “Perkins irked by LeBron James’s tweets.”4 But on the whole? It’s been great to watch.

So why am I so uneasy? I can’t quite put my finger on it, but somewhere in the wash of good vibes there’s something very faint that I don’t like. And this speaks mostly to the way being a sports fan — a pursuit that on one level is American culture’s last major inducement to proficiency in math — also depends on intuition and emotional guesswork. We talk a big game about VORP and PER and ADOBBB,5 but a whole lot of this hobby still comes down to projecting ourselves psychomagically into the minds of 25-year-old millionaires, and who knows whether that sort of speculation can ever really be accurate? But we keep doing it because, basically, it’s what we’ve got, and rooting for algorithms is only fun if you convince yourself beforehand that the algorithms have personalities.

And on that level, I guess what’s worrying me is, what if Durant and Westbrook actually are incompatible? Again, there’s no evidence that they are.6 They’re obviously halfway decent at playing basketball together. But I think that one of the reasons the conflict meme got traction in the first place is that intuitively, they don’t really look like a good fit. They don’t scan, basketball-telepathy-wise. Scottie Pippen’s sleepy cunning always seemed like a natural complement to MJ’s wide-awake primacy — not too demanding, willing to do what was necessary, able to press or hang back whenever the moment required. By contrast, the inferable psychological traits at work in the Durant-Westbrook partnership are a lot harder to reconcile. If you accept the prevailing notion that an NBA team needs to be organized around a single dominant leader, the Thunder’s dynamic is almost as crazy as the Heat’s.7

I feel most of the time like Kevin Durant is a birthday present from the god of basketball to me personally, so please don’t take this as criticism. But he’s a really, really weird sort of superstar. He is self-evidently lethal, intimidated by nothing, and cooler under pressure than most of us are asleep. At the same time, you don’t get the same sense of compulsive ultra-competitiveness from him that you do from the average NBA alpha dog. Guys like Kobe and Michael survey the court like they’re looking for rebellions to subdue. They invent slights to give themselves motives to crush people. Durant seems infinitely more self-contained — like he’s not even thinking that much about the other players or who’s the best or who defers to whom, he’s just doing his own thing, only his own thing happens to be absolutely brilliant. There’s a basic insecurity that drives the need to be recognized as dominant, but Durant somehow has the ability to dominate without being driven by it. His signature move isn’t blowing to the basket and leaving humiliated defenders in his wake, it’s curling off a screen, jab-stepping, then going up for some bewilderingly slightly off-balance jump shot that somehow reconfigures your sense of angles. He’s just a dude taking part in space. He’s not deficient as a leader — he’s actually a pretty good one — but for all his natural gregariousness, something about his game seems to point toward an ideal in which leadership doesn’t have to exist.

Westbrook, on the other hand, is all explosive swagger, basketball played with the intent to ruin lives. He’s got dominance DNA. You do not — from his facial expressions, from his demeanor, from his crossover dribble — get the sense that he’s built to defer to anyone, or that he wants to. (For all that Westbrook and Durant are thriving together this season, Westbrook’s assists are actually significantly down.) He wants to take his team on his back. It’s just that his teammate happens to be one of the greatest basketball talents of the age.

But where does that leave him? So far, Oklahoma City has thrived largely because both Westbrook and Durant have recognized that their situation at the Thunder is special and committed to making it work.8 They’ve forged an alliance in which Durant is the clear protagonist, but Westbrook is one of those Shakespearean sidekicks who get most of the best lines. But Westbrook and Durant are 23. They’re only just now starting to experience real sustained success. What happens if they make the Finals this year? What happens when they’re 25? What if Westbrook, who’s had essentially the same on-court personality since he was a pip-squeak in AAU, never fully accepts a secondary role? Do they keep negotiating new terms of allegiance, or do the strings eventually snap? (It’s worth noting that none of those Shakespeare characters lives out the fifth act.)

Of course, it’s possible that I’m getting ahead of myself even in getting ahead of myself. This is the kind of stuff fans worry about when things are going well. The Thunder have been an elite team for two seasons now, and while they still have an aura of newness about them, it’s finally starting to feel like some tough things are expected. There’s a bar now that they can’t clear just by showing up. Maybe what I’m really feeling here isn’t worry about Durant and Westbrook at all; maybe I’m caught in the vague anxiety of one of the hardest transitions, for both players and fans, in sports. Like the Thunder, I now have something to lose.