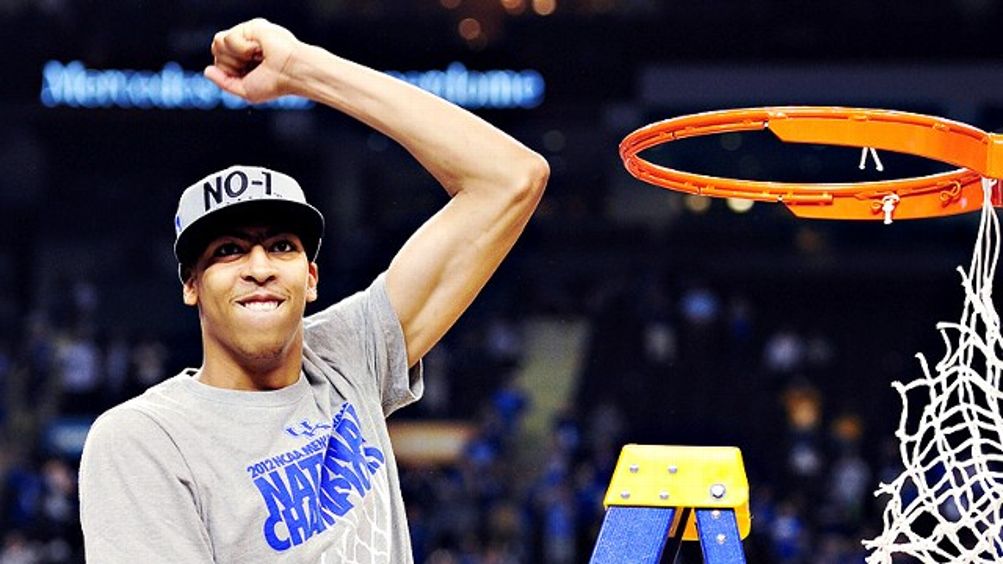 Well, one thing we know for sure, this one probably isn’t coming down. John Calipari’s name will stay in the NCAA record books this time, because the assembled kings of the buffet table are never going to vacate a national champion. They didn’t even do that to Jerry Tarkanian, and you had to know they were itching to. And, to be completely fair, and not to be at all cynical, Kentucky deserves to stay in there as an NCAA champion because it was a team good enough to win while being both transcendent and utterly banal, all on the same storm-tossed, subtropical night.

You’re never ready for things to get ordinary on you. In the first half of the NCAA championship game last night, Kentucky rolled out all its freshmen and sophomores, and every one of them played as though they were already in the middle of a salary drive. In the second half, Kentucky rolled out those same freshmen and sophomores and, for long stretches, every one of them played as though they’d been introduced to one another at half-past Jim Nantz’s pregame extreme unction. Sometimes, it seems, greatness needs the basic just to keep everything in balance, and so the 67-59 final represents nothing more than an unfinished, abandoned masterpiece that someone decided halfway through would look much better as a gas station billboard.

And Kansas did what an opponent is supposed to do — keep the eyeballs at home on the screen and make the champion earn every second of the game. Nothing was truly settled until 54 seconds were left, Michael Kidd-Gilchrist of Kentucky slapped Kansas point guard Tyshawn Taylor’s reverse layup back into Taylor’s hands, and Taylor responded by throwing the ball away at midcourt. At that time, Kentucky was leading by a shivery 63-57. The Wildcats were able to run the game out at the line after that.

Anthony Davis, the soon-to-be-former Wildcat star, created new statistics in the minds of the Kansas shooters. These included Maybe Not, You Take It, and Oh, Hell No.

So what resulted was a game in which Kentucky shot 53 percent in the first half and a gory 26.9 percent in the second. Anthony Davis, the soon-to-be-former Wildcat star, didn’t score in the first 20 minutes and still completely dominated the game with nine rebounds and three blocks, all the while creating new statistics in the minds of the Kansas shooters. These included Maybe Not, You Take It, and Oh, Hell No. These are subjective categories, but you know them when you see them. Davis ended up 1-for-10 from the floor, but he had 16 rebounds and six blocks and was the best player by an order of magnitude.

“I told him when we were coming out of the locker room, and I knew he didn’t have a point, and I told him, ‘Don’t worry about shooting the ball. You’re still the best player in the building.’ Then he shot the first three times he got the ball,” Calipari said.

“I was open,” Davis replied.

“It’s not hard to take a back seat,” Davis said. “All these guys can play. I knew I was struggling, so I told them, ‘I’m going to defend and rebound and you all make the points.’ That’s what they did tonight.”

(Earlier in the day, it was Davis who talked a hyped-up Kidd-Gilchrist off the ceiling. “Michael got up real early this morning screaming, and playing music, and saying, ‘We finally here.’ I was like, ‘Michael, will you be quiet?'”)

They were a truly great team in the first half — smart, tough, and superbly coached. In the second half, they were grinders. “I slowed them down a little bit,” Calipari said afterward. “They kept saying, ‘Let us go. Let us go.’ I pulled the reins back and they were able to respond. We were the best team this year. It wasn’t that we were the most talented. We were the best team, the most efficient team. And you saw that tonight. This team deserves all the accolades, not because of their talent, but because of the way they played defense and the way they shared the ball.”

In truth, they were quite something in the second half, when Calipari got cautious and the game got stuck in the mud. They locked in on every possession, contested every pass, and generally ratcheted their defense up in direct proportion to how badly they were shooting the ball.

“The momentum shifted on us,” said Kentucky forward Terrence Jones. “It was us, and then them, and us, and them. It was a game of runs. We just had to make stops at the end and that’s what we did.”

For a team that young to have the ability to adjust to a radical change in the pace of the game, and to change gears accordingly, without either panicking or attempting to force a tempo that isn’t there, bespeaks a level of maturity beyond the obvious, and it’s also an indication that the coach is doing more than rolling the balls out and ducking questions about his past.

There’s always an argument about how good the coach of a talented team really is. Pat Riley heard it with the Lakers. K.C. Jones heard it with the Celtics, and Phil Jackson heard it everywhere he went. The fact is that it takes a certain level of skill to navigate your way through the egos of great players, and an even greater level of skill to do so when the players are teenagers who everyone knows are yours only as temp workers on their way to the NBA. And while I don’t buy John Calipari as the social-working conscience of the modern NCAA, or as a paradigmatic figure of a new era — everything I’ve heard about him in this regard, I heard about Tarkanian for 20 years — there is no doubt that he has recognized how the building of a roster has changed the game as surely as Rick Pitino saw how the 3-point shot would change it 30 years ago. As he says of the whole one-and-done business, “It’s not my rule.” Perhaps not, but he’s had a shark’s instinct for how to take advantage of it.

And, with this bunch of young players, he pretty much hit the lotto. A couple of years ago, he tried the same thing with John Wall and DeMarcus Cousins, both of whom are now in the NBA. It blew up in his face during the tournament, largely because Cousins was already showing signs of being a career coach-killer. But with Davis, Michael Kidd-Gilchrist, and Marquis Teague — as well as sophomores Doron Lamb (who hit for 22 last night) and Terrence Jones — he got a group who were willing to commit to each other for as long as they played together, even if, as appears obvious, they played their last game together last night.

“I wanted that,” Calipari said. “I told them I wanted this one to be for the ages. Go out there and show everyone what kind of team you are, even though we were young. It doesn’t matter how young you are, it’s how you play together.

“More importantly, what a lesson for these young people — that, if you share, you give up some of yourself for everyone around you, if you care more about your teammates, it’s amazing what you can accomplish. It doesn’t matter your age, that’s the lesson in this. Everybody wants to go back to that [these players are] 18 and 19 years old. Yeah, they are. But they’re special young people who really decided that they were going to do this together.”

OK, I don’t buy it, either, but his team gave John Calipari the right for one night to sit up there and pretend to be St. Francis of the Back Pick. They won when they were great, and, when things got ordinary, they were better at being ordinary than anyone else was, too. So give them the banner and hang out the sign.