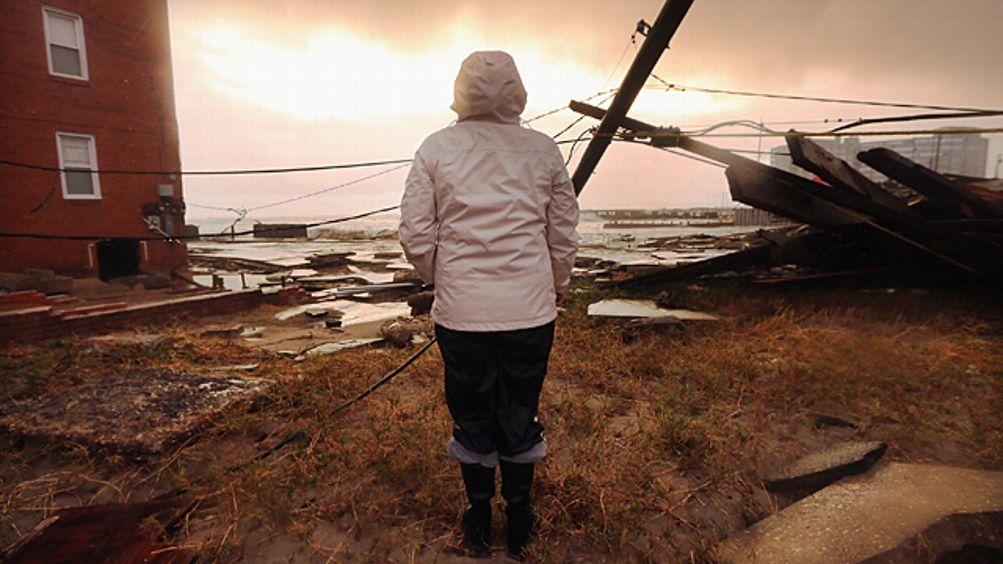 Are you still sitting at the computer? You know the hurricane is outside the window, right? You can track it with your eyes!”

“I want to take in as much of this as I can before the power goes out.”

“You mean you want to take in as much of the hurricane as you can before you’re forced to realize that you are CURRENTLY INSIDE A HURRICANE, is that it?”

“The photos people are posting are insane, though. Did you see that one of the shark swimming down the street in New Jersey?”

“That was Photoshopped. Doesn’t it bother you that the Internet does this to everything?”

“Does what to everything?”

“Well, you like sports, so take sports. It used to be, I’m guessing, that following sports meant going to a ballpark, I mean physically going, and watching a team play. Then later, it meant listening on the radio. Then watching on TV. Now you have 15 Chrome tabs open at all times, and whenever I walk past your screen, it’s always got a graph with a weird red sine curve on it. And that’s ‘following sports.'”

“But I mean, that stuff is just a representation of what happens in real games.”

“Is that even an either/or, if the meteorological models are precise enough?”

“It’s all models, that’s my point! Didn’t you say the other day that you thought everything that happened on earth was part of the FiveThirtyEight election-forecast model?”

“I said that every time I watch a squirrel in the backyard, I expect to read a post later where Nate Silver explains that ‘our model is designed to account for the effect of squirrels that take four hops on the brick path before scurrying up the willow tree.'”

“Yeah, Nate Silver was able to jump from writing about baseball to writing about politics because the data were congruent, even though those are two utterly different parts of human experience.”

“OK, but he’s writing about polling, not politics.”

“And what blog have you checked more than any other news source during the last two elections?”

“My point is that saying polling and baseball can both be reduced to useful statistics isn’t the same as saying that politics is indistinguishable from sports. It’s a pretty basic commonality.”

“My point is that the way you process information about a thing affects the way you think about the thing, inevitably. If you have this tool that lets you analyze baseball and politics and hurricanes in the same way, then doesn’t your brain start to perceive those things as just different types of content to fill an identical form of thought? That’s what the Internet does; it turns your whole life into a data-retrieval and organization problem. It doesn’t matter what’s going on, whether it’s the Champions League final or an earthquake or a war, you’ve got Twitter open, you’re cataloging the exact same dumb jokes and memes and waiting for the exact same second-by-second updates. I do it, too; half the time I’ve already formulated the exact phrasing of the Google search I’m going to run about something before I’ve even finished taking in what that something is.”

“Well, fine, but I want to stick up for data and the Internet for a second. I get that you’re not making the old Moneyball-ruined-sports argument — that we need to get back to soul and poetry or whatever — but saying that reality is overwhelming and we shouldn’t be blind to that fact.”

“But couldn’t you make that argument about anything? Or at least any new technology? It used to be that people really felt the full depths of darkness, and then the light bulb rolled into town, and now night isn’t that big a deal. Night is virtual!”

“It’s going to be a big deal soon, if this storm has its way.”

“So but if you make ‘be overwhelmed by the realness of reality’ into an absolute virtue, then you wind up, I don’t know, in the 17th century, huddled around a candle, scared of the constellations. And EVERYTHING is an emergency. Did you get a splinter? You are going to be eaten by wolves. It’s because we can turn reality into data and not just gape at it in terror that we have evacuation plans and 911 and everything else that will keep this storm from being a bigger disaster than it would have been otherwise. So if I’m following it on the level of data rather than the level of immediate experience, isn’t that better? Shouldn’t we all do that, at least until we’re in physical danger?”

“I’m not prepared to call your shark-on-the-street photos a beacon of civilization, but say you’re right. Where do you live, then? Doesn’t your whole life turn into that time we had a Super Bowl party and you complained that having real people around made it harder to focus on websites?”

“Well, after a certain point, why do you have to live anywhere? I mean, a couple of cities that I love are pretty significantly underwater right now. A good chunk of Manhattan looks like Venice. The New York subway is flooded. Trees are being ripped out of the ground. Does it really make me less connected to the rest of humanity to follow all this at once? Just look at the photo montage on the front page of The New York Times! Maybe I’m too abstracted or whatever, but to me this is just a way of knowing what’s happening in the world, rather than staring out my own window and going ‘wow, it’s really raining.'”

“OK, and it’s only because of models that we knew this was coming in the first place, so fine. I am not manning the pro-17th-century anti-all-technology yes-to-wolf-bites platform here. But isn’t there some sort of necessary cutoff? Don’t you have to make the transition back to your actual surroundings at some point? You can say what you want about knowing what’s happening, but clearly there’s also a risk of being alienated from your own experience. And if the house blew down, you would notice.”

“This is a terrible connection to make, but God, at a sub-sub- hurricane level, I think that’s one of the reasons I love sports. It can be all weird red sine curves and photobomb jokes for the longest time, and then suddenly there’s two seconds left in the fourth quarter and the Hail Mary is diving toward the endzone, and for that little stretch, the world is pure event.”

“And calculate the fantasy implications.”

“Yes! But you asked about being present in your own experience. And that’s not only relevant during a hurricane.”

“So you can still be overwhelmed by reality.”

“But it’s harder than it used to be.”

“It’s harder than it used to be, exactly.”