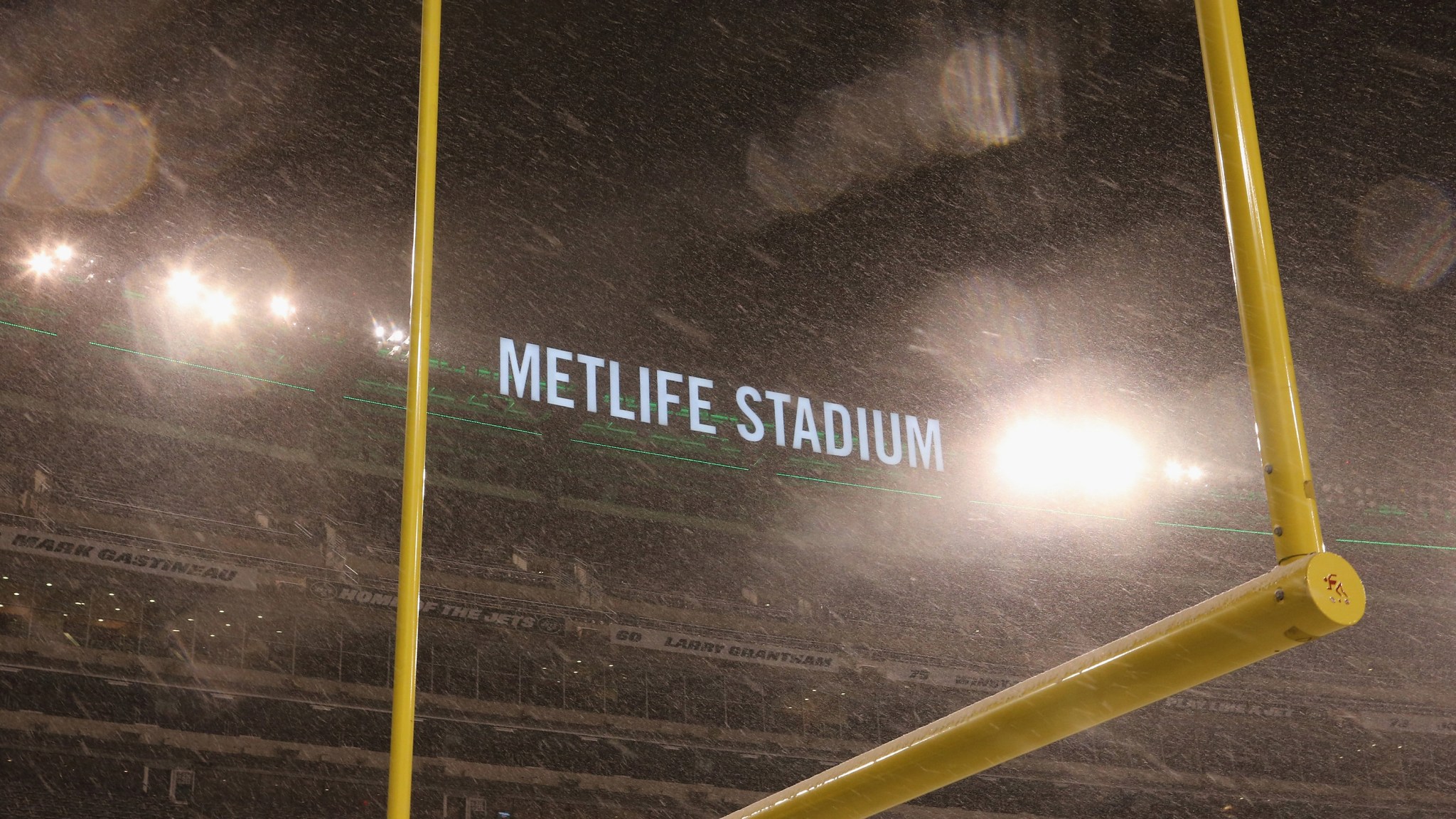 OK, so you’ve laid out a few grand for a ticket to Super Bowl XLVIII at MetLife Stadium on February 2. What are the chances you’ll be suffering through frozen temperatures or a blizzard?

Farmers’ Almanac has called for “a messy, stormy Super Bowl.” But the limited independent studies on the Farmers’ Almanac prove that it’s often wrong. No one can, with any sort of regularity, predict the weather precisely more than 10 days out.

Here’s the truth: History tells us it could be windy on Super Bowl Sunday, but snow and freezing cold are less likely.

As Nate Silver illustrated in The Signal and the Noise, climatology — the study of past weather patterns averaged over a long period of time — generally beats commercial weather forecasts when you’re predicting more than 10 days out. So here’s a little Super Bowl–related climatology for you.

I collected weather data from the last 30 years from an official weather station in Newark, New Jersey, 10 miles from MetLife Stadium. Thirty years is the normal climatological baseline, according to the National Weather Service. I limited myself to data from the hours of 6 to 10 p.m., when the shoulder pads will be crunching. To make the data set more robust, I collected information from the first eight days in February instead of just February 2. It adds up to 1,200 hours and 240 forecast periods, or days, of weather data.

I evaluated the data for conditions that could affect players’ ability to perform. The sabermetric football site NFL Advanced Stats says temperatures 25 degrees and below affect play calling. The same goes for a wind of 15 miles an hour or greater. Torin K. Clark, Aaron W. Johnson, and Alexander J. Stimpson of MIT have demonstrated that any type of precipitation [PDF] hurts the chance of making a field goal.

So, what are the chances for disruptive weather? Here are four weather events that could make ticket buyers regret their investments, along with the likelihood that they’ll happen.

Fourteen percent of the 6-10 p.m. time slots in early February in the last 30 years had at least one hourly observation of frozen precipitation (snow, sleet, or freezing rain). That’s a higher percentage chance than any previous Super Bowl [PDF] had, though it still is not particularly high. The Farmers’ Almanac isn’t likely to be correct.

The chance of a Super Bowl that combines extreme cold and snow is even lower. Only 5 percent of our 240 time periods saw frozen precipitation and at least one hourly observation of 25 degrees or colder.

Snow combined with low temperatures and windy conditions is even less likely. Only 3 percent of the time periods had snow, a temperature of 25 degrees or colder, and a wind measurement of 15 miles an hour or greater.

Call it the Misera-Bowl. Some might argue that 33 degrees and rain is worse than 32 degrees and snow. Indeed, those playing up the snow angle might be underestimating the chance of rain. It’s certainly higher at MetLife than it is at Super Bowls that take place in a dome.

Forty-one percent of the time, when it rained, the wind was also swirling at 15 miles per hour or more. Perfect weather conditions — for watching on TV.

Northern New Jersey is not Green Bay. The median MetLife Stadium temperature for game time in early February is around freezing, which means the temperature could very well affect the game.

Twenty-one percent of the time the temperature has been 25 degrees or below for at least one observation during the hours examined. That’s not small, yet it’s not sending me for the coat rack just yet.

Combine the cold air with wind and you start to make things uncomfortable. Twelve percent of the times I studied had both temperatures of 25 degrees or below and a wind speed above 15 miles an hour.

In the final seconds, the kicker trots out to attempt a game-winning field goal. The kick looks good, but the wind pulls a Scott Norwood.

While I wouldn’t try to predict the game coming down to a field goal, history tells us that wind has a decent chance of playing a role in the Super Bowl.

Thirty percent of the time there has been one hour or more when an early February evening had a 15 mile per hour wind or greater in Newark.

Lessons From the Past

The climatology of Northeastern New Jersey over the past 30 years tells us that 50 percent of the time precipitation, low temperature, or moderate wind occurred during the hours when the Super Bowl will be played.

As this Venn diagram illustrates, most bad-weather days included only one type of disruptive weather. 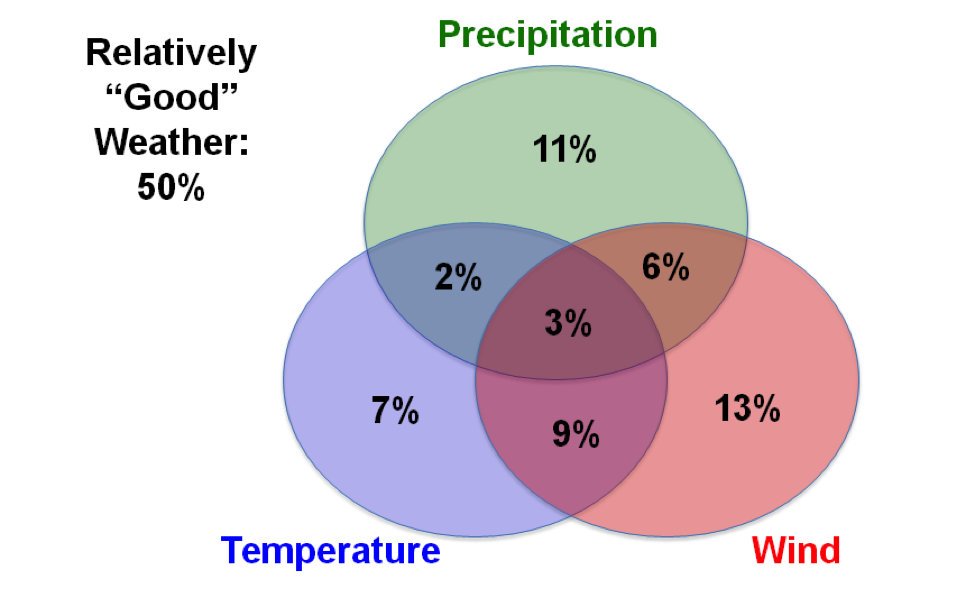 Only 20 percent of the time did two types of weather conditions develop that could have affected the game. A windy, cold, snow-swept early evening happened only 3 percent of the time over the past 30 years. In most instances, precipitation and low temperatures did not happen. The best chance for a poor condition was wind.

Now, it’s important to keep in mind that climatology is not a forecast. Just because something has happened only a few times doesn’t mean it won’t happen this year. We’ve seen somewhat reliable indications that this year will be colder than usual, but even these forecast tools are far from perfect.

Still, there’s only about a 3 percent probability of blizzardlike conditions involving snow, wind, and severe temperatures all at once — about the same chance of hitting a double-zero on a roulette wheel in Atlantic City. Bet on the wind on being the big story.