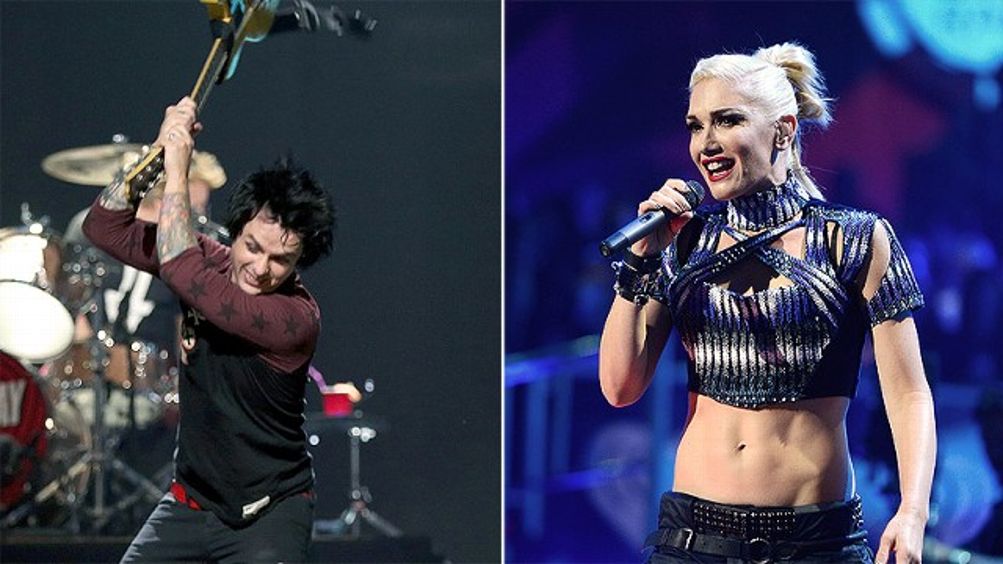 Then again, maybe not. Perhaps it’s strange only to those of us who still feel attached to Nirvana and Pearl Jam as the “important” mainstream rock bands of the ’90s. The rise of Green Day and No Doubt — the former with 1994’s 10 million–selling Dookie, the latter with 1995’s equally zeitgeist-y, 10 million–selling Tragic Kingdom — happened only a few years later, but if you were alive and engaged with rock music at the time, it might as well have been a different decade.

Grunge was older-brother music: part of the classic-rock lineage, politicized with old-guard ’60s liberalism, and fatally romantic about the flawed idea that self-martyrdom was the only logical conclusion to the pursuit of artistic purity. Grunge made you feel noble for liking it. The mid-’90s era of pop-punk and SoCal ska was Alternative Rock: The New Class, aimed at middle schoolers who preferred comic book exuberance to existential angst, irreverence to political correctness, and pink hair and half-shirts to greasy locks and brown flannel. This music made you feel cooler and younger than people who didn’t like it.

This created a schism that fostered resentment among the twentysomethings and teenagers who cared about grunge and the slightly younger teenagers and little kids who cared about Green Day and No Doubt, and that divide still exists for some of us, in terms of how these bands are judged. Billie Joe Armstrong turned 40 this year, and Gwen Stefani is a 42-year-old mother of two. But in musical terms, they are eternally 14, bratty, and a little hard to take seriously.3

But that’s just the case for people of a certain age. For the most part these cultural distinctions — as these things usually are — have been mostly forgotten. Today, Dookie and Tragic Kingdom get lumped into the older-brother canon. The boring modern-rock station in your town still spins the hits from both records nearly as much now as it did then. If you’re under the age of 22, Green Day and No Doubt are just two more bands — like the Rolling Stones or Aerosmith or Metallica or the Red Hot Chili Peppers — that have always been there. And, for those keeping score, Green Day and No Doubt did sort of win the ’90s, if only because they are still here when so many other bands aren’t.

Green Day and No Doubt took very different paths to their new records — ¡Uno! and Push and Shove, respectively — but they’ve arrived at similar destinations. For Green Day, ¡Uno! is a “back to basics” album, in that it’s a snappy and straightforward LP in the vein of Dookie. It’s a somewhat radical departure, seeing how it’s the first Green Day record in 12 years to not be a rock opera. This is the incredible current state of affairs for Green Day: After spending the ’90s and early ’00s as the tortured poster boys for the pitfalls (and windfalls) of selling out, it’s now news when they make a no-frills punk-rock record.

Green Day hasn’t totally abandoned its big concepts: ¡Uno! is the first of three albums, along with the sequentially titled ¡Dos! and ¡Tré!, that will be released a few months apart over the course of the next 16 weeks. (¡Dos! is set for a mid-November release, and ¡Tré! will be out in mid-January.) It’s Green Day’s Sandinista! or Use Your Illusion, and the product of highly productive recording sessions that yielded more than three dozen songs earlier this year.

Which is to say the making of Green Day’s new record is on the opposite end of the efficiency scale from Push and Shove. Work on No Doubt’s record began way back in 2008, in the wake of two big-selling Stefani solo LPs and in the midst of the singer’s second pregnancy. No Doubt hit the road the following year, made $34 million, and once the tour wrapped the songwriting process recommenced. And it recommenced again throughout 2010. After all that writing, you’d expect No Doubt to be eating hooks and crapping hits by the end of the year. But bassist Tony Kanal told Rolling Stone that the band entered the studio in 2011 with barely enough songs for a new record. Then No Doubt spent another year recording, though it appears this was done with the same urgency as the prolonged writing period. The making of Push and Shove can be likened to a household project that you have no interest in ever actually finishing, but somehow feel you must, if only because you’ve already spent two years halfheartedly putting a drop ceiling over a quarter of your basement and it would be annoying to explain why you’re stopping now.4

¡Uno! is the first Green Day album in three years; Push and Shove is the first record from No Doubt in 11. They aren’t great albums. But ¡Uno! is quite good, and Push and Shove is amazingly good considering the lackadaisical nature of its creation. Neither record seems all that modern, and yet they’re loaded with potential hits. ¡Uno! and Push and Shove are strongly commercial by virtue of sounding like classic versions of the bands that made them, which is remarkable at this advanced stage in their careers. Somehow, in 2012, Green Day and No Doubt matter, in roughly the same ways they’ve always mattered.

No Doubt’s most cited creative attribute is its malleability. It’s often pointed out that No Doubt adapts extremely well to emerging pop trends. But that’s not really true of Push and Shove. Yes, the MILF-y hip-swinger “Looking Hot” — Gwen is the one who is looking hot, in case there was a question — is goosed by the strobe light pulse of Top 40 EDM. But it also resembles Ray of Light–era Madonna. (There’s also a mid-song reggae breakdown that points back to one of the group’s earliest hits, “Spiderwebs.”) And the mix of thumping dancehall and hip-hop on the title track is aided by trendy co-star Major Lazer and produced by Diplo. But like Push‘s first single “Settle Down,” it’s more of a callback to 2001’s globe-trotting Rock Steady than anything in vogue. (It’s also the record’s iffiest song with some terrible, terrible rhymes by Stefani, including this already much-maligned quatrain: “La la la la vida loca / We speeding it up like Soca / Just when you think it’s over / We be on another level like we doing yoga.”)

I’m tempted to make an argument for “Undercover” being a stealth chillwave song, only the production is too good and Stefani’s vocal is too strong and confident. The reality is that close to half of Push and Shove is a callback to the ’80s alterna-pop that’s always been in No Doubt’s DNA. The glistening “Gravity” is a stellar space age love song, and the irresistible “One More Summer” is a sad reminder that Push and Shove not only arrived a few weeks too late for the summer of 2012, but also 26 years overdue for the summer of ’86. The album-closing “Dreaming the Same Dream” may have in fact appeared in the closing credits of the 1989 Corey Haim–Corey Feldman vehicle Dream a Little Dream, but don’t quote me on that. Push and Shove seems to have been made with the implicit idea that older fans would appreciate the inherent nostalgia of many of the songs, and younger fans would like it because those influences have reappeared on the pop charts. (Gwen Stefani apparently has been studying Katy Perry’s Teenage Dream.)

Green Day shouldn’t have the same contemporary concerns as No Doubt, as they never stopped being a creative entity and they operate in an arena — radio-targeted rock music — that hasn’t changed dramatically in the past 15 or so years. (Well, except maybe for lately.) But Armstrong’s pre-rehab “I’m not fucking Justin Bieber” rant over the weekend suggests a nagging fear of irrelevance that’s otherwise absent on ¡Uno!, which sounds like a record that could have been released the week Bieber was born.

At this point Green Day is a band, like AC/DC or Iron Maiden, that people expect to have a very specific, narrow aesthetic to which it remains faithful. ¡Uno! is the most aggressive Green Day record in many years — probably since 1995’s sludgy Insomniac, which includes the decade’s best Soundgarden single (“Brain Stew”) not actually recorded by Soundgarden — though it’s not exactly the full-on Dookie redux it appears to be. The most important thing 2004’s paradigm-shifting American Idiot did for Green Day, aside from reviving what was threatening to become a moribund career, was finally free the band from its punk-rock baggage. American Idiot remade Green Day as a rock band with punk accents, as opposed to a punk band that accidentally appealed to rock fans.

¡Uno! is a punk-sounding record made by an arena rock band, which means that the songs are played fast but full-bodied, loud but on excellent equipment, and loose but always with a steady eye on maximizing the bombast. I have no idea how difficult it truly is for Armstrong to still come up with stuff like “Nuclear Family,” “Let Yourself Go,” and “Troublemaker,” which reconfigure the pile-driving guitars, chest-slapping drums, and bad English accents you know from a million other Green Day tunes. But he’s still the best guy in the world at somehow making this formula sound, if not fresh, then immediately pleasurable. Even when he ostensibly goes outside the formula, like on the four-on-the-floor meathead disco-bop of “Kill the DJ,” it still sounds like a Green Day song. The man nonchalantly produces chunky three-chord pop-rock songs like most of us eat bowls of cereal in the morning.

If the other albums in the ¡Uno! trilogy are as consistently good, Armstrong will have indisputably established himself as the Irving Berlin of cock-rock-y pop-punk. If that doesn’t get you into the Rock and Roll Hall of Fame, what does?

Filed Under: Movies, This Is 40