The 30: Center of Attention

Kyle Korver: An Offense Unto Himself 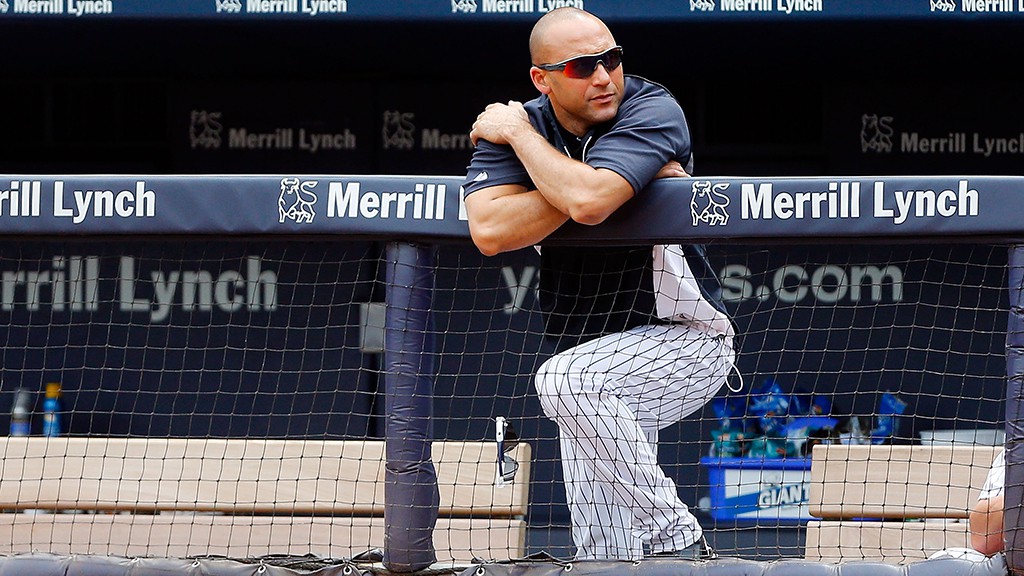 On Saturday, the Toronto Blue Jays won a game in Yankee Stadium for the first time in their last 18 tries. His team having lost there again Friday night, Toronto manager John Gibbons decided on Saturday that he wasn’t going to risk the lore anymore. Before every home game, the Yankees celebrate themselves and their history with a multimedia pageant that would embarrass Kim Jong-un. Great moments in Yankees history — and there are a lot of them, damn it — come gushing from the center-field message board. Lou Gehrig humbly faces death again, his voice amplified to about 11 decibels past boiler room. A nation’s lonely eyes can easily find Joe DiMaggio; he’s projected up to the size of a warehouse wall. Add to this the fact that the team is spending the entire season celebrating the impending retirement of Derek Jeter, who already is appearing up there on the Big Screen with the rest of them, and you wind up with the Los Alamos of Yankeeology, every day before every game. If they keep this up all season, the franchise may go blind.

But nobody does this stuff better than New York does, and Gibbons knows that, so he refused to send his team out for batting practice. They stretched in their clubhouse. Gibbons determined that what his club needed was to go about its business without history hitting it over the head with a hammer. And it turned out that it worked. On Saturday, the Yankees shamed every single one of their ghosts by playing the field like goobers. In the seventh inning, with the game tied 2-2 and men on second and third, Toronto catcher Dioner Navarro bounced the ball to Brian McCann at first base. McCann stood there, flummoxed, looking at the ball like an elderly lady contemplating the honeydews at a fruit stand, checked the runners, and let Navarro get by him. (And, somewhere, Carlos Gomez giggles horribly and shouts, “Play the game the right way!”) One batter later, and facing Matt Thornton with the bases loaded, Dan Johnson chipped a looping hit toward second base. Yankees second baseman Brian Roberts joined McCann, who was hanging around in the same general area, in complete bumfuzzlement. The ball dropped in front of him. Johnson was safe. Melky Cabrera scored. This is not an inning they are going to be replaying in the third Yankee Stadium come 2044. The Jays had a lead and, eventually, their first win in the Bronx since August 29, 2012. I am as respectful of analytics as the next guy, but sometimes you just need the other side to put on the big old clown shoes and give you a break. “We were trying anything,” Gibbons said. “We were just trying to change the feeling, the mojo here. When you lose 17 in a row, you deserve something like that.”

(To be fair, McCann, a career catcher, didn’t start a game at first base until May, and he’s only there now because Mark Teixeira and Kelly Johnson are both injured.)

Thus liberated, the Jays went out on Sunday and won again, holding off three Yankees rallies to win, 5-4, on some nifty — if somewhat more conventional — baseball. In the ninth inning, with the score tied, Jose Bautista reached first on a fielder’s choice. Then he caught everyone by surprise by stealing second without even drawing a throw. That put Bautista in position to score the winning run on Navarro’s single. They remain in second place in the American League East, one game ahead of the Yankees as both teams pursue Baltimore in what is becoming a very tight race. For years now, people have been waiting on the Jays, and the Jays have rewarded them by falling flat. Now, though, with the Red Sox playing for 2015, and Baltimore unable to break free, and the Blue Jays — suddenly being capable of entering Yankee Stadium without turning into a puddle — are where everybody thought they should have been for the last few seasons. They’ve already had a last-to-first run, having torn up their schedule in May. At 35, Mark Buehrle has stabilized a starting rotation that was in chaos last season, but the face of the transformation going forward may well belong to someone who is 13 years younger than he is, and who arrived just in time both to bail out a struggling bullpen and to inject it with some unmistakable charisma. 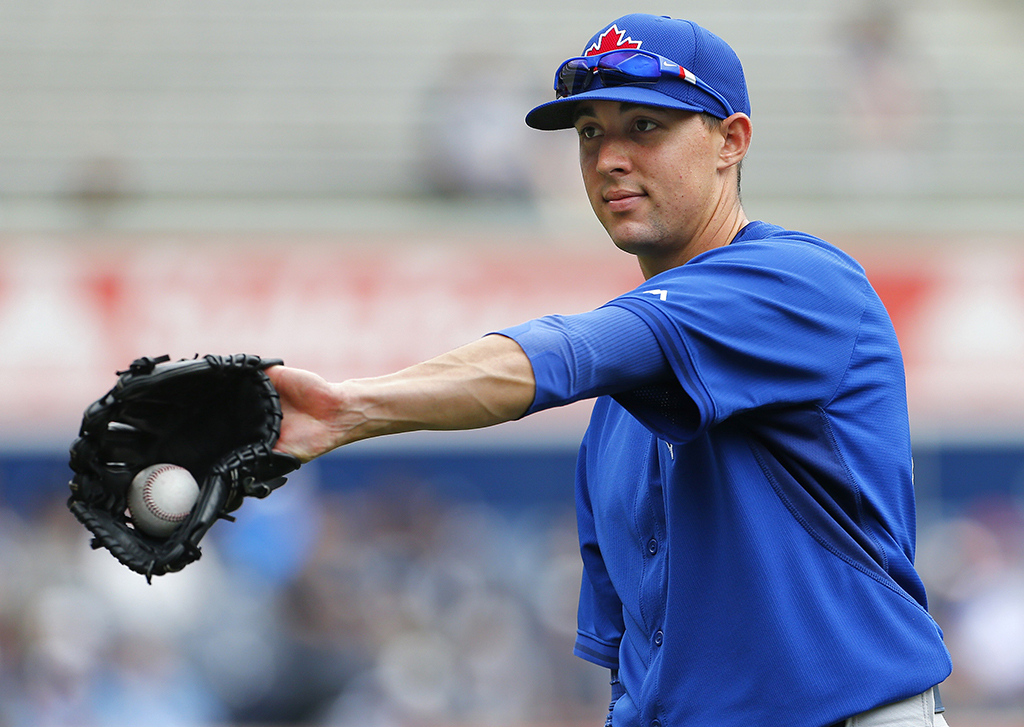 Last Tuesday, Toronto called up Aaron Sanchez, a lean, 6-foot-4 right-hander with absolutely filthy stuff. He throws pitches that bring you out of your chair. Sanchez sailed through the Blue Jays system, spending only a month in Triple-A before joining the team just in time to stand Boston on its ear, pitching two scoreless innings through the heart of the Red Sox order. On Sunday, he came on and pitched the seventh and eighth innings. In the seventh, relying almost completely on down-biting fastballs, he got all three hitters to bounce meekly into routine infield outs. (“Pitching to contact” is the term of art now, it seems.) The Yankees dinged him for the tying run in the eighth, when Carlos Beltran got his bat on a low-and-away fastball and lofted it over shortstop. But all this meant was that, when Toronto finally concocted the winning run in the ninth, Sanchez had his first major league win.

“Maybe not so much the way I would have liked to have had it,” Sanchez said. “I mean, we go and score a run there in the eighth, and I go back out there, and I need to do a better job of shutting that inning down. It was a good pitch, but it was Carlos Beltran, and he’s a good hitter, and he did what he was supposed to do. I think I was still a little bit upset that I didn’t do my job, but once Bautista stepped across the plate, I was glad we won it.”

This is the best thing about pennant races. Young players get chucked into them, and you don’t know whether you’re watching the beginning of a career that one day will be splashed across whatever the 22nd century has for “game preparation.” Within the pressure, there are beginnings and there are endings, and you just have to be sharp enough to catch them as they go by.

F  irst one and then another pair of eyes followed the minister’s, and then almost with one impulse the congregation rose and stared while the three dead boys came marching up the aisle … They had been hid in the unused gallery listening to their own funeral sermon!

Or, if you will, Daniel Webster’s famous dismissal of the vice-presidency: “I do not propose to be buried until I am dead.”

It must be genuinely strange to be Derek Jeter this year. (On Sunday, Colorado’s Troy Tulowitzki, in New York to see a doctor, showed up at the game just to pay homage.) His prolonged farewell tour thus far has been as dignified as one of those things can be. He can see on the not-too-distant horizon the inevitable extravaganza that will envelop him at the end of September. Barring an appearance in the playoffs, there will be the last home game (September 25, against Baltimore), and then the last game of them all, three days later, in Boston, with all that that entails. It can’t be that easy to continue to play shortstop in the major leagues while history is slowly encasing you in marble. It can’t be that easy to live in the present when you’re already being measured for history. Ah, well, there’s always postgame banality.

“OK,” he begins, laughing. “It’s been good talking to you.” Hello, he must be going.

“We don’t go into the last two days worried about what we did the last eight games, you know what I mean?” Jeter said. “Toronto played better than us. They won two out of three. We have another one tomorrow, so that’s basically it. Numberswise, 7-3, that’s good, but you would have liked to have won this one today.” He was asked about Tulowitzki’s pilgrimage and Jeter said, “You say he was here to see me? That’s speculation. Maybe he was here to see Toronto.” And then everybody laughed.

He is handling it as well as can be expected. In fact, it can be argued that the public perception of his entire career has prepared him uniquely for 162 games of gift-laden idolatry. He truly was the guy who Played The Game Right. He got dragooned into everybody else’s fantasy of what A Ballplayer should be. (This meant, of course, that he was held up as a tin god by the steroid hysterics in the press, which can’t have been comfortable for him or anyone else.) Of course, he profited from this, and handsomely, too. Still, Jeter has played his entire career knowing that the game was building a pedestal under his feet — and that’s not even to mention the fact that various wise guys have used his late-career excellence as prima facie proof of … something. Derek Jeter got handed the role of hero in an age when baseball and its acolytes went into a moral panic and talked themselves out of having any. This made him both an idol and a target. No wonder the man speaks mainly in fluent clubhouse.

“Sometimes, teams are going to beat you. Toronto was better than us, but we have another one tomorrow,” Jeter said. One day very soon, of course, he won’t. He’ll be pixels on the big screen, and that’s it. Meanwhile, Aaron Sanchez may be burning down the American League. The passage of time is marked in milliseconds now. History is something you saw a moment ago.