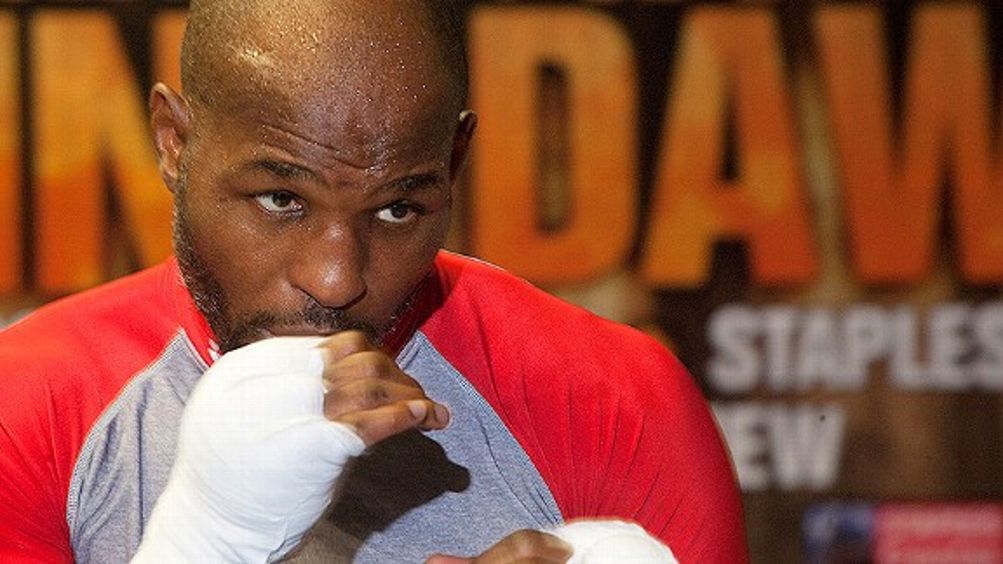 When he ducks his gray-spattered beard and bring-out-the-gimp mask between the ropes Saturday night, Bernard Hopkins will be precisely 46 years and nine months old. For the first time in a very long time, he will not be the oldest fighter on the card.

At the age of 18, Hopkins began a 56-month stretch inside the State Correctional Institute at Graterford, Pennsylvania’s largest maximum-security prison, on an armed robbery conviction. Four years and eight months — that’s not a short stint in the joint. But that, too, is good for just second place on this fight card.

That’s because 52-year-old Dewey Bozella, who spent half of those 52 years at Sing Sing Correctional Facility in upstate New York, will enter the ring at Staples Center approximately three hours before Hopkins defends his light heavyweight championship against Chad Dawson. Bozella’s fight will be his first professional bout.

Both Hopkins and Bozella went to jail in 1983. Hopkins got out less than five years later and began transforming himself from a lost cause to a living legend. It took 26 years before Bozella was released, and he was innocent all along.

Nobody can give him back those 26 years. The best anyone can do is help him make the most of the freedom he has now. To that end, Hopkins, a man whose empire was built on two-plus decades of looking out for number one, is doing what he can for his newfound ally in against-all-odds obstinacy.

If you aren’t already familiar with Bozella’s story and don’t have time for the director’s cut, here’s the one-paragraph version: At age 23, Bozella was found guilty of murdering a 92-year-old woman in Poughkeepsie, N.Y. The conviction came six years after the crime, with the case for Bozella’s guilt being built on the testimony of two deal-cutting inmates. At Sing Sing, Dewey learned to box. The sport offered him purpose. It also gave him an identity: He became the prison’s light heavyweight champion.1 On four separate occasions, Bozella could have been released on parole just by admitting his guilt, but he refused to confess to a crime he didn’t commit. Finally, in 2009, evidence that had long been buried — including another suspect’s confessing to the murder — was uncovered, and Bozella finally went free.

Bozella was thrust into the spotlight in July, when he won the Arthur Ashe Courage Award at The ESPYs. That’s how Hopkins learned of a simple dream Bozella still clung to, a dream that Hopkins could help realize. Bozella wanted one pro fight. That’s all. No pipe dream of fighting for the championship in his 50s. Just one four-rounder. The man known as “The Executioner” was moved to provide a jolt of life for someone who, had he been convicted in another state, might have met the real executioner long ago.

In early September, Hopkins asked his assistant trainer, Danny Davis, to see if he could whip Bozella into fighting shape. All Hopkins told Davis was that he was sending a 52-year-old aspiring pro fighter to the Joe Hand Boxing Gym in Philadelphia to meet him. “Come on, man, stop playing,” was Davis’ response. With understandable skepticism, Davis opened the gym’s doors to Bozella and put the old man through three standard exercises. Bozella could barely breathe by the end.

Davis called Hopkins. “What are you doing, man? I’m going to kill this guy.”

The next day, Davis put Bozella through a series of eight exercises. Bozella’s creaky legs could barely support him at times, but he wouldn’t quit. So Davis brought him into the ring for a little pad work. After two rounds, Bozella was slouched in the corner, drool hanging from his mouth. “He looked like he was detoxing,” Davis recalls.

That’s when Bozella sensed that his new trainer was about to give up on him and located the reserve tank. He began bouncing on his toes. He gestured toward Davis to bring it. A few inspired rounds of pad work later, Davis was committed to the cause.

It wasn’t until a couple of weeks later that Davis finally found out just what the cause was.

“After we’d been working together for a little while, he said, ‘You ever look me up?'” Davis says. “I didn’t know his story at all. I finally looked him up that night. I’m sitting there in bed, at my computer, watching his story, and I’m just flowing with tears.”

Bozella, meanwhile, has been flowing with sweat, day after day, trying to undo more than 20 years of ring rust in about six weeks of training. His last prison fight was in 1990.

“This is a lot different than when I was 30 years old,” Bozella says as Davis wraps his hands for a workout. “It’s a gigantic difference. I had to dig down deep to get to the level that Danny wanted me to get to. Really, I’m about a month and a half away from the shape I want to be in. But I just have to work with the time I have.”

Bozella has shared gym time with Hopkins, and taken a few pointers from the master. I ask if he’s sparred at all with the champ. Bozella’s mouth curls into a wry half-smile, and he just shakes his head. “It’s not happening, man. Too quick, too fast, too sharp.”

“Plus,” Davis chimes in, “Dewey’s not a southpaw.”

Chad Dawson fights out of a left-handed stance. He’s quick-fisted, he’s in his prime at 29 years old, and he’s about two inches taller than Hopkins. In theory, he’s a nightmare matchup, the sort of opponent someone in Hopkins’ position never voluntarily faces. Besides, it’s not as though Hopkins has anything left to prove. Between 1995 and 2005, he defended various middleweight championship belts a record 20 times. In May, he defeated Jean Pascal to become the oldest fighter in history to win a major title, breaking George Foreman’s record. His résumé is loaded with fights in which he was supposed to get beaten into retirement and instead won handily: Felix Trinidad (40-0 at the time) in 2001, Antonio Tarver in 2006, Kelly Pavlik (34-0) in 2008. Hopkins’ legacy is beyond secure. So why fight a guy like Dawson?

“I must confess that I really have a problem,” Hopkins says. “I’ve been addicted for many years. I love winning. I love competition. I love displaying what I can do.”

In this case, what Hopkins can do is prove every bit the stylistic nightmare for Dawson that Dawson is supposed to be for him. At the sports books, the odds range from a pick ’em to “Bad” Chad2 being a very slight favorite.3 If you know anything at all about Hopkins, you know the worst thing that could happen for Dawson is for the odds to swing definitively in Dawson’s favor.

“Throughout history, youth has always prevailed,” explains Hopkins, whose record as an underdog might be as impressive as his overall win-loss spread. “It’s part of the way the world works. But every now and then, you run into an old dog who ain’t going to give up so easily.”

On August 24, when Dewey Bozella first applied for his boxing license, he was denied. When you’re 52 and looking to make your pro debut, no responsible athletic commission is going to rubber-stamp you. But Bozella is one of those old dogs. The first time he went for his license, he had trained himself and had nobody backing him. He was out of shape, and it didn’t work out. So he regrouped, worked with Team Hopkins in the gym, and brought California’s most powerful promoter, Oscar De La Hoya, to the licensing.

With a panel of commission members staring him down, Bozella could have been forgiven for experiencing parole-board flashbacks. This time, fortunately, there was no pressure to make a false confession. This was about empirical evidence. Bozella had to jump rope for five minutes, hit the heavy bag for five minutes, do the same on the speed bag and the mitts, and then finish with four rounds of sparring. On September 29, 52-year-old Dewey Bozella was granted a license to box professionally, and a spot was cleared for him on Hopkins’ undercard.

There is one final, peculiar intersection between the stories of Bozella and Hopkins. Bozella’s opponent for his first and last pro fight was announced Monday, and his name is Hopkins. Larry Hopkins, a cruiserweight from Houston with an 0-3 record, will stare Bozella down before the bell rings Saturday. The “Hopkins” thing is a happy coincidence. The “0-3” thing is not.

But this isn’t about Bozella proving he can beat a world-class fighter. Bozella is not a world-class fighter — not anymore — and he doesn’t claim to be. When he pops Davis’ mitts, he looks good for 52, but you can’t help but notice that his left hook travels slowly and the joints don’t bend as deeply as they once did. When he playfully flexes in the mirror after a workout, he looks tremendous for 52, but his physique doesn’t leave you demanding to see his birth certificate the way Hopkins’ body does.

Bozella is not trying to be Hopkins. And Hopkins openly admits he could never be Bozella.

“Dewey spent half his life stuck in a box, and all he had to do to get out was say he did something that he didn’t do,” Hopkins reflects. “Most people would have taken the plea just to get the hell out of the hell. I might have taken it, too. I’ve accomplished a lot in my career just by staying out of jail the last 23 years. But at the end of the day, what Dewey did is beyond anything I’ve ever done.”

“People think that you can’t do something,” Bozella says, sounding an awful lot like the other middle-aged fighter on Saturday’s card. “They tell you it will never happen, and here I am, doing it. That’s what this is about. This is about never giving up.”

Oral History: “Sugar” Ray Leonard vs. “Marvelous” Marvin Hagler
An Imperfect Path to Pacquiao-Mayweather
Klitschko vs. Haye: Why you should care