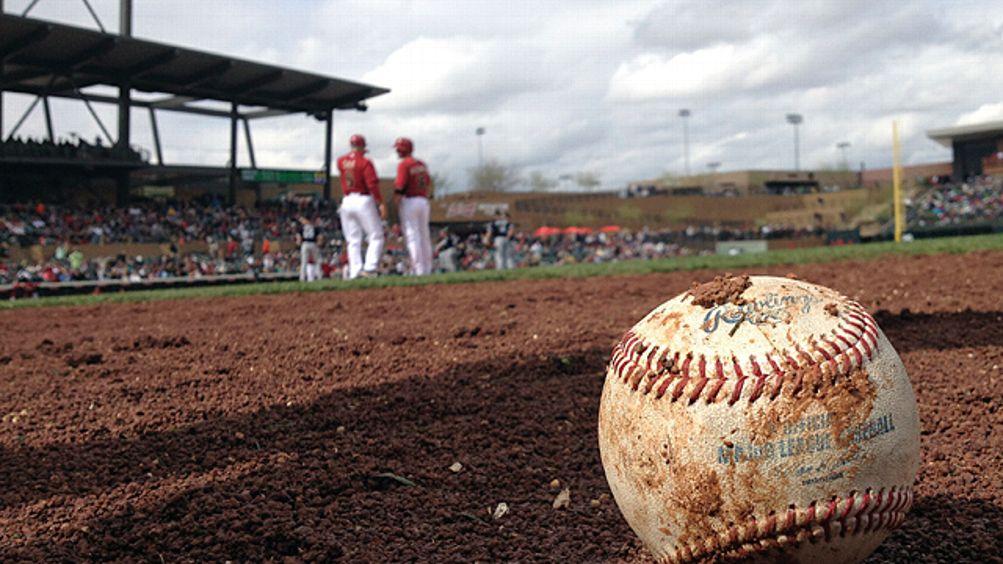 This spring, Elian Herrera came to Arizona to work. Herrera is 28 years old. He was born in the Dominican Republic. He has dark skin, and though he speaks English, he does so deliberately, in a way that reveals that his first language is Spanish.

In Los Angeles, Herrera is a backup outfielder with the Dodgers. Here at spring training, he’s the type of guy who could arouse “reasonable suspicion.” A person who’s “reasonably suspicious,” according to Arizona’s immigration law, is one who looks like he or she might be in the United States illegally. That means Herrera faces the same dilemma as a Latino day laborer in Nogales or a Hispanic attorney from Phoenix. If Herrera is pulled over — if he fails to use his blinker, say — a police officer can ask to see his papers.

“Right now, if they want, they can stop and ask,” Herrera says. “If there’s no ID, they can take you down.”

The Arizona law, known as SB 1070, went into effect in September. Six months later, half the players in baseball have reported to the greater Phoenix area. More than one-quarter of those players are Latino. Even though every one of them is fully documented, SB 1070 has made major leaguers into unwitting test subjects and spring training into a simulated game of “Who looks suspicious?” “The Dominican ballplayer that speaks Spanish, in the eyes of some, that’s ‘reasonable suspicion,'” says Raul Grijalva, a Democratic U.S. congressman from Tucson.

“I got a driver’s license,” Herrera says. Every time Herrera ventures outside the ballpark, he makes sure he takes it with him. Talk to Latino players in Arizona and you find them constantly patting their pockets for licenses, green cards, passports.

“I carry them all the time,” says Martin Prado, a Venezuelan-born third baseman with the Diamondbacks. “Just in case. You never know.”

“My brother just came in from the Dominican,” says Ubaldo Jimenez, a pitcher with the Indians. “The first thing I told him was, ‘You have to carry your passport. You don’t want to end up in jail.'”

“Before, you didn’t take your passport with you,” says Yorvit Torrealba, a Venezuelan catcher with the Rockies. “You didn’t need to. But now, everybody is so panicky about this thing that you take it everywhere.”

I put those concerns to Joe Arpaio, the sheriff of Maricopa County, which includes Phoenix. Sheriff Joe is a noisy supporter of SB 1070 and stricter deportation policies. It is a strange fate of the times that Sheriff Joe has jurisdiction over the Cactus League territory.

“Nobody’s going to go around stopping them at a restaurant, asking for their ID,” Arpaio says.

He pauses and adds, “Unless there’s some other reason to do that.”

Sheriff Joe is a Red Sox fan. Since he was raised outside Boston, he sees his continuous fandom as one more sign of his political consistency. When I reach Sheriff Joe one afternoon, he has just gotten off the DL — he fell on a sidewalk and broke his shoulder in two places. “I know how the ballplayers feel now,” he says.

“Bring those ballplayers to me,” he barks. “I’ll give ’em a pair of pink underwear.” This is more welcoming than it sounds. For though Arpaio puts pink underwear on county inmates, he also uses it as a gift for visiting celebrities. Sarah Palin got a pair when she toured Arizona last year.

Really, Sheriff Joe wants any Latino ballplayer who fears he might be racially profiled to stop by. “I wish they’d come to my office and come out and meet the sheriff,” he says. “I’ll tell ’em all the facts about this … We don’t stop people because they look like they’re from somewhere else. I’m an equal-opportunity guy. My guys arrest everybody.”

In the age of SB 1070, it’s a typically surreal boast. For much of the controversy over the law boils down to whether “reasonable suspicion” is a helpful way to find undocumented immigrants or whether it amounts to institutionalized profiling. When SB 1070 was signed into law, in 2010, it was billed as an emergency stopgap. In the 1990s, federal authorities had worked to stanch the illegal migrant flow into California and Texas. A side effect was that more immigrants tried to cross the Arizona border. There were hundreds of thousands of apprehensions along Tucson’s border patrol sector in 2000 alone. SB 1070 supporters argued they were putting local police on the immigration beat because the feds had failed at the job. As Governor Jan Brewer put it, “Arizona without question bears the brunt of that failure.”

Whether immigration enforcement can be carried out by local cops is a thorny constitutional question. But SB 1070 had other problems. While ethnicity alone isn’t supposed to constitute “reasonable suspicion,” the vast majority who meet the standard will be Latinos. “If you have a Canadian player in the United States and they’re pulled over, do you think they’re going to ask for their papers?” says Rod Barajas, a catcher with the Diamondbacks.

A cop who identifies a suspicious person is directed to call federal authorities. But detainment, in one sense, is a second-order concern. SB 1070 means American citizens can be asked for their papers again and again, creating a climate of fear. “The ballplayers have that insecurity, that you have to be fully documented to go up the street to get a burger,” says Grijalva.

“The most profound effect has been one of reputation,” Grijalva continues. “In Latin America and Latino America, there is the sense that Arizona has become an outlander … The ballplayers know about it. The reputation has preceded their arrival.”

“That is déjà vu,” says Jose Serrano, a Democratic congressman from New York. “There was a time — and I’m old enough to remember it — when Latinos and African Americans in some parts of this country were treated very badly when they would come to spring training.”

That was in Florida, in the ’60s, more than a decade after Jackie Robinson crossed baseball’s color line. Fully integrated clubs like the Yankees and the Reds went south and found they’d been newly segregated. Blacks and Latinos bunked in rooming houses — Frank Robinson remembered once sharing a bathtub with two other players — while whites stayed in high-end hotels. Stadiums had “colored” sections. Héctor López, a Panamanian outfielder with the Yankees, said his wife was scared to venture out in Fort Lauderdale “on account of this thing in the South.”1

As chance would have it, the All-Star Game was scheduled to be played in Phoenix in 2011. That suggested a strategy, too. Nearly two decades before, the NFL had pulled the Super Bowl from Tempe after voters refused to make Martin Luther King, Jr. Day a state holiday. In Arizona, immigration activists called on commissioner Bud Selig to move the game. Players threatened to boycott, though a few backed down under sportswriterly cross-examination. The Padres’ Adrian Gonzalez, who was raised in Tijuana, first said he’d consider boycotting the game; then he claimed he didn’t understand SB 1070; and then, on game day, wound up starting at first base.

Selig, in any case, wasn’t moving the game. So the Midsummer Classic became a political proxy battle. The plaza outside Chase Field was a protest ground. Sheriff Joe wanted to show up with a chain gang. “Why not?” he says. “I use a chain gang at the international golf tournament in Scottsdale every year.” Sheriff Joe’s discretion eventually prevailed. “I thought, Why interfere with the All-Star Game?” he says. “It’s a game everybody should enjoy.” He brought a chain gang to the field the next day instead.

On the other side of the battle, an immigrant-rights group called Somos America passed out white ribbons to fans. Luis Avila, who was Somos America’s chairman at the time, says the group had wanted players to wear ribbons on the field. But they were told that would have violated Major League Baseball’s uniform policy.

In June 2012, the U.S. Supreme Court finally ruled on SB 1070.2 The court struck down several parts of the law. But it held that the key portion — allowing police to ask for documents — was constitutional. Nine months after the decision, Giants closer Sergio Romo, who was born in California, got pulled over at spring training.

He adds, “At what point does Major League Baseball say, ‘We’re not going to go to Arizona and practice anymore?'”

When I arrive in Phoenix, the activism within baseball is all but dead. The players union has switched to defensive actions. It is more concerned about its members winding up in a jam.

This spring, the union sent an advisory to players, in English and Spanish, about SB 1070. Lino Diaz, who until last year was Cleveland’s cultural development coordinator, says the Indians once brought in Phoenix police officers to explain the law. “We felt like it had more weight that way,” Diaz says. “The players were overwhelmed with the things that could get them in trouble, which are obviously a little different than the things in their countries.”

Players who once pummeled SB 1070 sound resigned. “There’s really not much we can do about it,” Gallardo says after throwing four innings against the Diamondbacks. “The law is the law.”

“It’s the government,” says Torrealba. “You follow the rules, I guess.”

Late one afternoon, I find Barajas sitting in the Diamondbacks clubhouse in Scottsdale. Barajas is a big, burly catcher who looks like he could smite a base stealer with his eyes. “You said you couldn’t imagine your grandparents being asked for their papers,” he tells me. “Well, I wouldn’t want to see my parents in that situation, either.”

To a police officer, Barajas could arouse the same “reasonable suspicion” as Elian Herrera. Barajas’s parents are Mexican immigrants; his skin is olive-colored. But he was born in Ontario, California. He’s as American as Mike Trout. I ask Barajas if he is ever worried about being asked for his papers.

“I don’t know if I should carry my birth certificate or passport. I never thought about it,” he says. “I’m sure it could happen.”

Then Barajas’s eyes narrow. “I think of myself as an American citizen. There’s no reason whatsoever for me to have to carry that around.”