Stock up: the first round

Editor’s note: This article appears in the May 22 issue of ESPN The Magazine.

I need to win my AL-only fantasy league this season. It’s one of the most crucial things happening in my life right now — not top-five, but definitely top-10. I wish I were making this up.

So does my wife. When she hears me discussing trades with my co-owner, Hench, or sees me silently swearing in front of my laptop because Torii Hunter took another 0-for-4, it makes her angry. Like, really angry. Like, we-might-be-getting-divorced-soon angry. She doesn’t know (or care) that Hench and I were favored to win this season, or that we’re currently floundering in fifth place with a cast of underachievers. 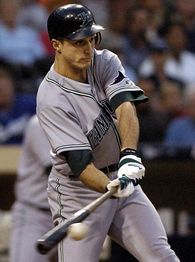 Our defining player? Rocco Baldelli, an $8 flier who was recovering from knee surgery when we drafted him last year. We were looking ahead to 2006, when he’d go for $22 to $25. But we hadn’t counted on Rocco blowing out an elbow in rehab. Ever hear of a nonpitcher needing Tommy John surgery? Apparently, he’s made of papier-maché. For two solid months, I’ve been scouring Tampa papers for good news, but Rocco has suffered more setbacks than Whitney Houston and Bobby Brown combined. I could go on and on, but as ESPN Radio’s Erik Kuselias says, talking about your fantasy team is like showing off vacation photos. In the end, people really don’t care; they just want to know if you had a good time. I’m not having a good time. This team is ruining my life.

Of course, my wife doesn’t understand. She thinks I’m nuts. And maybe I am. I’ve already spent 100-plus hours managing my team: talking trades, researching free agents, bitching to Hench, monitoring our guys through DirecTV’s baseball package, even calculating how much it would cost to murder Baldelli. I can’t think of a less productive way to spend my time, short of joining a gym or appearing on “Around the Horn.” When you consider the upside (a 1 in 10 chance of winning the league) against the downside (a 9 in 10 chance of losing), then mix in the anticlimactic feeling of taking the title — no raucous champagne celebration, no ring, just the respect of friends and not enough prize money — there’s no real reason to play fantasy other than for the male bonding or for watching your one friend who married too soon get completely bombed at the draft.

So why do I want to belong to more leagues? Because I’m an overly competitive psychopath, that’s why. Currently, I belong to five: one baseball, two NBA, two NFL. I’d join more, but no other sport appeals to me; not NHL, NASCAR, golf, tennis or even bass fishing. It makes me wonder why we aren’t more creative with this stuff. Why aren’t playoff leagues popping up for the NFL and NBA? Where are the March Madness leagues? Are there boxing and wrestling leagues out there? And what about nonsports leagues? Why aren’t, say, Hollywood-related leagues more prevalent?

Some junkies are ahead of the curve. Take Matthew Berry, who runs “The Talented Mr. Roto” Web site. He belongs to a movie league. Berry and his friends bid on any film that is scheduled to be released over the course of a year, their stats coming in categories like most weeks spent in the top-five grosses, total box office and Oscar nominations. According to Berry, someone spent nearly half his cap ($260) on “The Da Vinci Code” in February. Wow. When he griped to me that one of his big sleepers, “Akeelah and the Bee,” opened poorly, I was hooked. Yes, I need to belong to a fantasy movie league, if only so I can spend $45 on “Snakes on a Plane” and taunt someone because he overpaid for Vin Diesel’s next movie. This sounds fun. This sounds dangerous, potentially life-threatening. This sounds like something for me.

When I told my wife about it, she looked like George Karl at the end of the Nuggets-Clips series: sourpuss face, hands at her sides, complete disbelief. All she was missing was the potbelly.

“You have a problem,” she decided.

“You don’t understand the fantasy thing,” I countered.

“Well, come up with a league I’d enjoy. Then, maybe I’ll understand.”

Now that sounded like a challenge. And I never turn down a challenge. So I racked my brain, contemplating all the dopey things she likes.

And then it hit me.

The Sports Gal loves Us Weekly. It’s her bible. She devours it religiously each week. She examines every picture, reads every story and mutters stuff like, “My God, she’s too skinny!” and “I just don’t get why they’re together!” If I’ve begun to thumb through the mail on the day the magazine arrives, she walks over and rips it out of my hands. She likes seeing what everyone is wearing. She likes the gossip. She out-and-out loves the “Fashion Police” and the “Stars — They’re Just Like Us” sections. (Because, after all, stars are just like us! They go to Starbucks! They take out the trash!) There is nothing about Us Weekly she doesn’t appreciate. 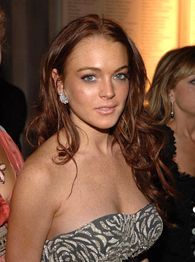 So I’m going to create an Us Weekly fantasy league just for her. It’s a million-dollar idea that could make me rich, if I weren’t too dumb to figure out how to trademark it. More important, it will save my marriage. I can’t afford to get divorced, it’s way too expensive.

Here’s how it works: 10 teams, auction format, $200 cap, five male and five female celebs per roster. Scoring is head-to-head for 22 weeks, playoffs over the last three (so you can have two seasons per year). OK, let’s say you pay $55 for that chain-smoking tramp Lindsay Lohan. If she makes the cover of Us, you get 10 points (three for the inset photo). Every other Lohan picture inside is worth one. If she appears in the “Fashion Police,” you’re docked three. That’s it. Simple. You can add or drop your celebs each Monday. Like maybe you want to dump Jake Gyllenhaal (because the whole “Brokeback” thing has played out) and grab Josh Hartnett (because he’s dating Scarlett Johansson). Then again, you might want to hang on to Gyllenhaal. He’s single and his number might be up in the Lohan deli line.

Here’s the beauty of my new league. Let’s say you took a $5 flier on Denise Richards a while back, hoping she and Charlie Sheen would patch things up. But when, out of nowhere, she lands in a love triangle with Richie Sambora and Heather Locklear, she suddenly becomes Chris Shelton or Jonny Gomes, a bona fide sleeper! On the downside, I could easily see someone overpaying for Nicole Richie, thinking she might start to date Diddy or seek help for an eating disorder, and when she doesn’t, you’re playing catch-up for five months. See? The possibilities are endless.

When I described the concept to the Sports Gal, she was confused, then intrigued, then enthralled. “I’d win that league!” she ultimately decided. Now she wants me to organize it. And I just might. I want our whole house to be as crazy as I am. I want her swearing at Mariah Carey like I swear at Rocco Baldelli. I want her to sneak out of bed to change her lineup at 2 on Monday morning, or complain about her team on Friday when the magazine arrives. Then, she’d finally understand the whole fantasy thing, and we’d live happily ever after.

At least until the first time we tried to work out a trade.