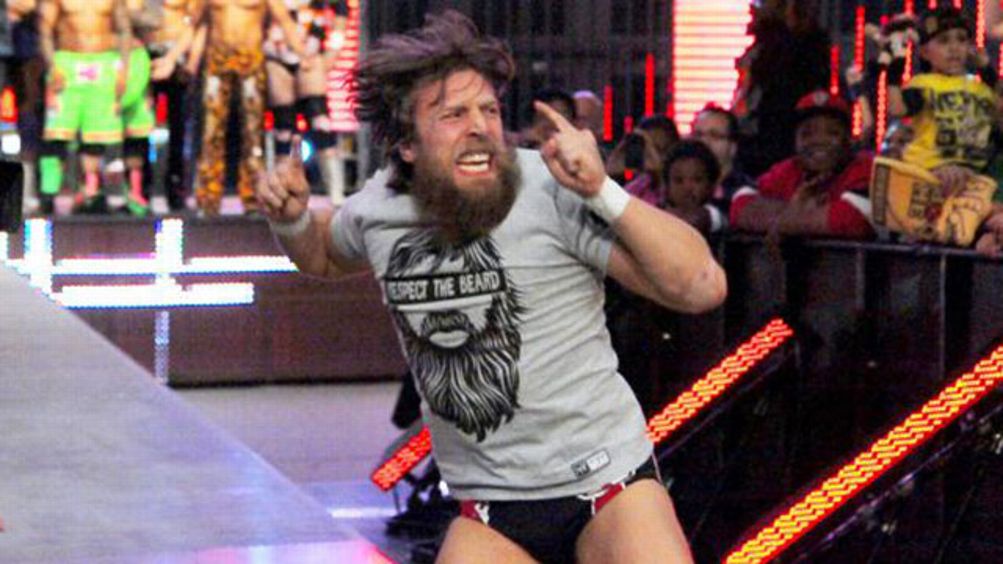 There was a great moment during Monday’s Raw when new Raw general manager Brad Maddox was cornered backstage by Stephanie McMahon and her husband, Triple H. They both sarcastically complimented him on his work that night, but frightened him by insinuating that his signature decision — to allow WWE Champion John Cena to choose his own opponent at SummerSlam — might raise the ire of WWE chairman Vince McMahon.1 Trips and Steph were both smirking, needling Maddox over his inexperience and obtuseness like a couple of Williamsburg musicians taking shots at a fresh-off-the-bus twentysomething who had the temerity to wear a Weezer T-shirt with no intended irony. They were preening like a couple Brooklyn hipsters.

Which is just about right, because while I was sitting inside Barclays Center Monday night for Raw, I couldn’t help noticing that WWE’s product had a rising tide of irony, irreverence, counterintuitive storytelling, and, well, creative facial hair. It felt a little too much like Williamsburg.2 Which, in terms of wrestling ethos, among other things, is a long way from Philly. Sunday night in Philadelphia — legendary home turf of ECW and their cult of Extreme — at the Money in the Bank pay-per-view, fans were treated to an excellent show highlighted by two multiparty ladder matches that resulted in surprising victories by the immaculate gasbag Damien Sandow and the preternaturally monotone Randy Orton.3 Both men are borderline insufferable in large doses, but only the former appears to be deliberately insufferable. It had almost everything a Philadelphia show could hope for — Rob Van Dam, Paul Heyman, ladders, stitches galore, and a few “HO-LY SHIT!” chants for good measure. It was a Very Hardcore Philly Evening. But even so, it felt like a throwback. Even though the WWF was born in New York and came of age in the 1980s with Hulk Hogan’s cartoonish Southern California, the company swiped much of its modern identity from Philadelphia, the City of Brotherly Staple Guns to the Forehead. Yet the Philly style is a wrestling movement lodged in the ’90s. That fans still clamor for it says more about the current product (and the trends in wrestling over the past decade) than it does about the vitality of hardcore.

As WWE has developed into the dominant, basically monopolizing force in mainstream pro wrestling, it has become stodgy and comfortable. For all its recent attempts to court young viewers — going TV-PG, transitioning from Attitude to lassitude, from obscene to John Cena — WWE has done little to regain the youth and vigor that once drove the product. In the ’80s, the WWF was a trailblazer. Now it’s the West Side Highway.

In their meeting with Maddox, Triple H and Steph asked if he’d talked to Vince and said that if Cena chose who they suspected, Vince might be upset. This is incredible on two levels. First, they were plainly alluding to Daniel Bryan, who until then had no legitimate claim to the SummerSlam main event, aside from widespread Internet speculation that Bryan was being penciled in for the match. They could have handled it in a more straightforward manner — with some kind of winking reference to online fans — but instead they just let the rumor mill be the entire backstory. Second, the entire sequence was based on the idea that Vince doesn’t like Bryan, another Internet trope. Except this one isn’t true — at all. Sure, Vince earned his reputation for favoring tall, brawny beach bodies, but he was also responsible for Shawn Michaels and Bret Hart (back when they were considered miniature), as well as Rey Mysterio, Eddie Guerrero, and Chris Benoit. He may like oversize hero types, but he likes underdog stories just as much. So allow me to break some news for once: Vince loves Daniel Bryan. I know this because people with firsthand knowledge started telling me so 18 months ago. But more importantly, I know because Daniel Bryan is featured prominently on television every week and now he’s going to headline SummerSlam. He was arguably the star of Money in the Bank, and undeniably the star of the weeks leading up to it. He’s a headliner, and you can thank Vince for that.

In recent weeks, Steph and Trips have joked about Vince’s advancing age, how he has fallen out of touch, and how he’s basically crazy — all smark rumor mill grist, which serves to reinvent Vince as a fully modern self-parody, a “Mr. McMahon” for the Internet generation. Fans have long complained that he doesn’t “get the modern fan” — it’s a frequent lament of an audience that has been overexposed to Vince as the real-life owner of the company. Since he outed himself as chairman, McMahon has transformed from an onscreen character to a reality. He’s the boss, and so everything he does is boring, because it’s too real. He’s the buttoned-down Mr. Big to WWE’s increasingly hip fan base. The only way he can make amends — and rejuvenate himself — is by being self-aware enough to play a blissfully deluded version of himself. He has to be tuned in enough to know he’s no longer with it.

Yesterday, Aubrey Sitterson suggested to me that Barclays could be surpassing Madison Square Garden as WWE’s new home in New York. Don’t get me wrong — MSG still has decades of history behind it, but, sitting in Barclays, watching Raw on Monday, I was more than a little convinced. I’ve never seen the ushers at a wrestling event so excited to be working. Barclays employees at the entrance to my section were discussing the details of every feud each time I walked by, and as I left the arena I heard two older men at the VIP entrance talking about the “good old days” with “Andre the Giant and Bruno.” Brooklyn has these old-guard supporters, but most importantly its image is hip, young, vital — everything the WWE’s faux-new power structure wants to portray itself as. (And that’s not strictly a knock on Triple H and Steph — Brooklyn’s got a borderline monopoly on all things faux.)

Whether the fans at Barclays on Monday night were working class, middle-class gentrifiers, or first-generation immigrants, as fans most of us were hipsters on some level, rolling our eyes at Vince and saying “Whatever, old man.” WWE knows this, of course, which is why Vince isn’t going to feud with Cena or Orton or even Punk — to be relevant, Vince has to be the foil of the hipster fan. If the hipster home is Brooklyn, he must be our Manhattan. Or worse — our Connecticut. At the end of Raw, Cena came to the ring to select his SummerSlam opponent, and most of the roster assembled on the entrance ramp. After weighing the crowd’s reaction — which was basically a 10-minute-long Daniel Bryan chant4 — Cena selected Bryan, who was artfully hidden from view behind his oversize coworkers. The crowd, of course, went wild. Somewhere backstage, Vince was readying his scowl for next week, but he was smiling inside. According to wrestling writer Wade Keller, this is exactly the plan. Vince will set himself opposite Bryan in all the ways people suppose he really feels: Vince thinks that Bryan is too small, that he’s weird, that he’s goat-faced. “WWE is incorporating the McMahons into a reverse-psychology game to try to entice PPV buys,” writes Keller. It’s like when NFL owners black out the TV broadcasts of home games that don’t sell out. Vince is telling Bryan’s fans to buy this PPV, or their weird, goat-faced hero will be back on the midcard. It’s blackmail with the best intentions.

Sure, some fans will complain that the story line is about Bryan’s perceived inadequacy, but come on. Onscreen Vince had no lack of negative things to say about Steve Austin and Shawn Michaels and CM Punk. Like a bad father, Vince can only show you he loves you by fighting with you.

The WWE has reached a bizarro, hyper-self-aware moment when Cena can joke openly about “wrestling one of the Bella twins”;5 when Triple H can wish Maddox “all the best in your future endeavors”;6 when color commentator Jerry Lawler can say that Antonio Cesaro “knows five languages, including Dutch”;7 and when announcer Michael Cole can rhetorically ask “Who gets higher than Van Dam?”8 (And that was just Monday night in Brooklyn!)

It goes hand in hand with all the preening protagonists, the vintage T-shirts, and the sudden prevalence of sculptured facial hair. It’s the hipster takeover of wrestling, but it’s also a reminder that WWE doesn’t have to pander to little kids to be young and vital. That was the lesson Philly taught pro wrestling: Just be cool and the kids will follow.

Here’s a story. There’s a scenester burlesque club in Manhattan’s Lower East Side called The Box. It’s the kind of place money managers go to feel like hipsters. A few weeks back, a couple friends of mine were hanging out in the upstairs area near the VIP section, and they noticed an older gentleman in a banquette with four or five exotic-dancer types and a full bottle-service drink spread. The gentleman was immaculately put together but not the best-looking man in the club, so one of the guys became intrigued and approached him. “You look like you have everything you ever wanted in life,” he said. “What advice can you give me to end up as happy as you someday?” The gentleman looked him in the eye, smiled, and said: “Just think about who you are — what makes you you — and be more of that. You do that and you’ll succeed. That’s the beauty of capitalism.” Then the man left with his entourage and my friend who approached him asked a waiter who the gentleman was. “That was Vince McMahon,” he said.

Maybe, then, it’s no surprise that Vince is embracing a slightly more downtown ethos — and that Bryan has not been forced to adopt his closest approximation of the standard WWE “look.” Instead of being Cena’s mini-me, he’s being himself. It was just too perfect that the pasty, shaggy, goat-bearded, record-collecting wrestling nerd would get the biggest moment of his career in Brooklyn, the promised land to which so many of his dweeby Pacific Northwest brethren have migrated.

For WWE’s part, I’m sure they’re reconciling themselves to making a new home in Brooklyn. Above all the other factors, the physical (if not spiritual) relocation boils down to pure practicality. Rental fees at MSG have become so expensive that WWE can hardly afford to run a show there anymore.9 If it takes outrageously overpriced Manhattan rents to send you running to Brooklyn, well — as somebody once said — that’s the beauty of capitalism. That’s how all the hipsters ended up in Brooklyn, too.