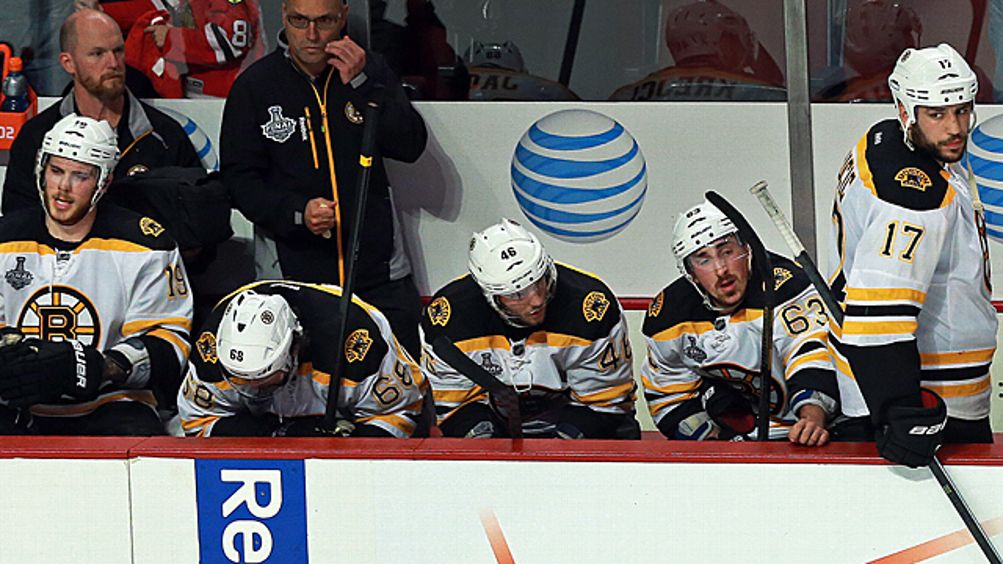 Act like you’ve been there before, we love to command overexuberant winners, whether they’re baseball players breaking out the champagne and ski goggles just for making the playoffs or that guy in the YMCA rec league who screams “let it rain!” each time he puts up a brick. It’s a brilliant cutdown, really: undermining, haughty, yet not requiring the admonisher to have been there before, either. There aren’t really any suitable comebacks: Oh yeah? I’ve come closer than you! lacks that particular zing.

Perhaps it’s because the phrase is so well suited as an insult that we rarely use its powers for good. Hey, we don’t whisper encouragingly to a despondent kid who has just committed a crucial mistake, act like you’ve been there before. But maybe we should. Because the true value of having “been there” isn’t so much in learning to temper the upside — it’s more in maintaining sanity and perspective when something goes wrong, or as Kipling put it, keep[ing] your head when all about you are losing theirs and blaming it on you.

“We’ve been through a lot,” Bruins coach Claude Julien said Thursday, the day after the Bruins blew a 3-1 third-period lead and fell 4-3 in triple overtime to the Chicago Blackhawks in Game 1 of the Stanley Cup final. “When you go back to the year we won, we were down 2-0 to Montreal, losing our first two games at home. We bounced back from that. We’re down 2-0 against Vancouver in the finals and we came back. I don’t think much is going to rattle our team. We’re a pretty resilient group of guys.”

It was a theme repeated again and again by the noticeably upbeat and forthright Bruins who spoke to the media Thursday. It’s just one game, they kept reminding reporters looking to mine the loss. It could just as easily have been us with the win. It’s a long series. It’s a game of bounces. We’re not worried. We’re just gonna move on.

Bruins defenseman Andrew Ference shook his head no when asked whether he was upset about the game-tying goal that redirected off his skate and into the Boston net in the third period Wednesday. Come on, didn’t it bother him a little?

“No,” he insisted. “You’d drive yourself crazy. I might have [thought about it] when I was 22 or something like that, but at this point it was out of my mind on the next shift. At this point you almost kind of shake your head at it and say, ‘What can you do?’ You hope somewhere down the line you can shoot one off one of their feet.”

Across the room stood another Bruins blueliner, this one actually 22, who had also been involved in an unfortunate play in Game 1.

But despite the bad pass up the middle that Torey Krug made in the third period — a pass that ended up on the stick of Chicago’s Andrew Shaw and then, moments later, in the back of the net courtesy of Dave Bolland; a pass that Tuukka Rask called a “terrible turnover” — the rookie defenseman seemed at ease, almost jolly. He talked about how earlier that morning his iPhone had buzzed with a text message, and how he’d fumbled with the phone for a minute before dropping and breaking it.

“Maybe my hands just haven’t been working the last 24 hours,” he joked.

Julien made a point to say the turnover wasn’t all Krug’s doing, and a bad line change had limited the player’s options. Krug disagreed.

“I do take full responsibility for it,” he said, “because I’m a guy who likes to play with the puck and I’ve got to take care of the puck, first and foremost. At the same time, to have a coach who supports you like that and understands the game the way he does is important for me. It helps me to be able to recover that much faster.”

It wasn’t just Julien who had Krug’s back. “It’s a game of mistakes,” Bruins forward Chris Kelly said. (That must be one of his mantras — he’s said it before.) “Everybody makes them, even the best players … I wish people can be on the ice to see how quick it is. You have a split second to make a decision and most times you make the proper decision, but sometimes you don’t.”

Like nearly all of the guys on the Bruins roster, Kelly has been there before. He knows that one loss, however grueling or unlucky or late at night, isn’t cause for a meltdown. It’s this collective mentality that helps a young guy like Krug move forward with selective amnesia.

“Early in your career, your first time around, the highs are higher, the lows are lower,” Andrew Ference said. “It’s easier to ride those big ups, those highs, but you get some pretty big swings.

“That’s why you see a lot of older guys have a lot of success in the playoffs. It does help in situations like this to go over it. It sucks having guys that are emotional train wrecks in the room, it really does. It’s contagious. You have to tell them to shut up every once in awhile. You need to have an atmosphere that’s calm.”

It’s not always satisfying to hear players chalk up game-changing moments to bad bounces, or puck luck, or just plain old mistakes; it feels like a cop-out or an excuse. But in so many cases, that’s genuinely all it is. “It’s called hockey breaks,” Julien said, and they can appear in all sorts of forms: one weird angle here, one hop off a stanchion there, a ref in the way, a missed call … or a double deflection, like the one that finally ended the triple-overtime game Wednesday night.

“Bolly, I love you!” screamed Chicago’s Shaw after his game-winning goal, sending good vibes toward Bolland, who had been the first of two deflectors on Michal Rozsival’s shot. With even more lust, he shouted out his feelings for the piece of his equipment that had last touched the puck. “I love shin pads!”

The Blackhawks have faced some outstanding goaltending throughout the playoffs, colliding with a hot Jimmy Howard in the second round and the reigning Conn Smythe winner, Jonathan Quick, in the conference finals. Now they’re battling Rask, who has the best save percentage of any goalie this postseason. The best way to beat these elite goalies is to exploit those quirks of geometry and physics and luck. During Game 1, the Blackhawks routinely put odd, low-percentage shots on the net, hoping for a weird carom or a juicy rebound.

“If you’re looking for those perfect plays, they’re going to be hard to find,” Hawks coach Joel Quenneville said.

“We have to put the pucks from bad angles, going for second or third chances, that’s how we’re going to beat him,” said Marian Hossa, who later had everyone at the press conference laughing when he rued how, after not getting to bed until 3 a.m. after Game 1, he was awakened bright and early by some drilling next door. (I expect a Steve Bartman–style witch hunt on the offending neighbor should Chicago lose Game 2.)

“We have to keep shooting pucks from bad angles,” he continued. “Good example — third goal [the one that hit off Ference’s skate], lucky bounce, going in. That’s the type of goal we have to score to beat him.”

If the Bruins have been able to draw on their experience to brush Game 1 off their shoulders, the Blackhawks similarly know that they shouldn’t get too high after one heady win. In the two seasons after they won the Cup, they were knocked out of the playoffs in the first round; this year they beat the Red Wings handily in Game 1 of their second-round series — only to lose three straight and find themselves facing elimination. Whether you’re the winner or the loser, the fact remains the same: It’s only one game, and it doesn’t mean much.

And then there’s Shaw, a pistol on the ice and a crazy person in the locker room. Unlike most of his teammates, Shaw hasn’t been there before; when the Blackhawks won the Cup in 2010 he was a junior player a few weeks away from getting passed up in the NHL draft for the second year in a row. (The following year, Chicago took him in the fifth round.) He’s got the kind of raw attitude at 21 that Ference described having at age 22, the excited volatility that over time will be smoothed, but that for now is the only way he knows how to be.

“Yeah, I sit next to him,” said Patrick Kane, sounding more like a wise old veteran than a rampaging 24-year-old man-child himself. “There’s times where I almost gotta tell him to shut up because he just asks questions and doesn’t stop talking when you’re next to him there in between periods.”

There were five between-periods on Wednesday night, more than double the regular amount, and there would have been a sixth if not for Shaw (or his shin pad, at least).

“He probably scores more goals off his shin pads than he does his sticks,” Kane said. “I’m sure he’ll take them, and we will — any way we can get them.”